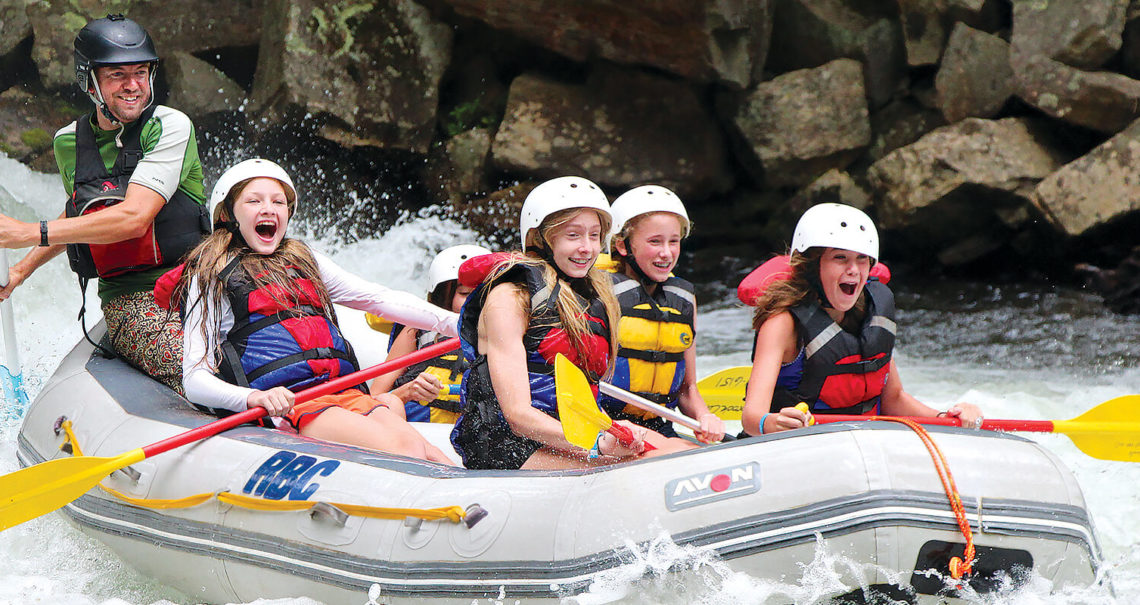 The school buses were gray-green, or maybe gray-blue. We rode them out of summer camp and through the low fog, past little mountain towns like Etowah and Horse Shoe and Mills River. It was always cool that early in the morning, always sweatshirts-and-shorts weather. We were just old enough to know what it might mean to huddle three or even four to a bench seat — glad for our knees touching; relieved, maybe, that that’s all that was touching. I guess that made us 13.

We were the older kids, and we were headed for the French Broad for a day of rafting while the younger kids stayed at camp to make dream catchers and friendship bracelets and play one more game of capture the flag. We were so old: almost junior counselors, almost in high school. We piled out of the buses and into the parking lot at the river outfitter, watched our counselors watch the river guides talk to us about life jackets and safety. Our counselors were 17 years old. The river guides, I now know, couldn’t have been more than 22 or 23. All of us were babies. None of us knew it.

On the river, the social order worked and reworked itself, but not in an unfriendly way. Some of us rode six to a raft, and some rode funyaks — single-person inflatables that could make a rider feel more adult than they’d ever felt before. It’s hard to find a space to be alone at 13, at summer camp, and the funyak provided exactly the aloneness some of us craved — we could be apart but not away, thinking our grand thoughts to ourselves without losing sight of each other. We were trying to figure out who we wanted to become, how to grow up to be counselors and river guides. Would we ever be 20? What would our cool, eclectic nicknames be?

We stopped at a gravel beach for lunch, a miracle of burgers and chips and sodas that the guides conjured from coolers and a charcoal fire ringed by rocks. They told us that the morning had been a warm-up, that this afternoon we’d see Class III and even Class IV white water. We thought about getting dumped into rapids called Washing Machine or Big Pillow or Thresher, about edging up against mortality, about who would save our lives. We checked the straps of our vests and helmets. We paddled off into the blazing early afternoon.

We got sunburns. We lost sunglasses. Some of us went down rapids backward, and some of us pretended like that wasn’t terrifying. Some of us loved it, though, loved making it down without falling out of the boat, loved other people seeing us make it down. Some of us were trumpet players and soccer players, still trying to figure out what space we occupied, what spaces were available to us. Some of us were starting to realize that we’d be negotiating those rapids for the rest of our lives.

On the bus ride back to camp: singing. “Three Chartreuse Buzzards,” an absurd song that let us stay safely in the world of childhood, and “One Tin Soldier,” a song that made us cry for the adults we’d too-soon be. Maybe somebody had a Walkman, and maybe some of us shared headphones. Maybe some of us fell asleep on each other, an intimacy no one had imagined before. None of it was anything we’d imagined before. We were out at the edge of what we could know, and that was all we knew — that and that the bus was taking us back somewhere safe, somewhere we could stand in two worlds at once, somewhere we could be 13 for one last summer. For a lucky few of us, part of us would be 13, there on that bus, forever.