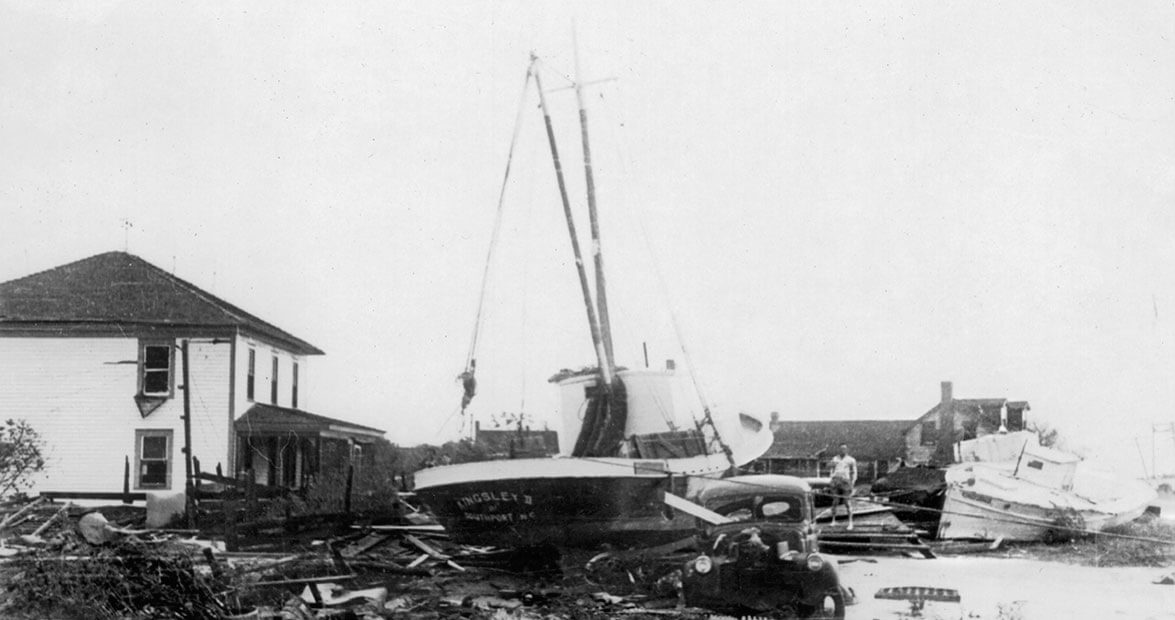 America is almost three years into fighting World War II, with invading Allied forces pushing across France toward Germany. On September 12, the front page of the Rocky Mount Evening Telegram proclaims, “2 U.S. COLUMNS RAM SIEGFRIED LINE” — and, in smaller type, “Hurricane Drifts Toward U.S.” Forecasters at the U.S. Weather Bureau Office in Miami, who are tracking what will be one of the worst storms to hit the Outer Banks in the 20th century, name it, simply, The Great Atlantic Hurricane.

The heavy deployment of men and vessels along North Carolina’s coast leaves the area especially vulnerable. About 400 miles southeast of Cape Lookout, the destroyer USS Warrington and a companion ship, the USS Hyades, steam into the maelstrom, crossing right into the eye of the hurricane. Unable to proceed against the monstrous waves, the Warrington heaves to while the Hyades sails on.

By the early hours of September 13, the storm has intensified, and the destroyer takes water down its main vents. “The water rushing into her vents caused a loss of electrical power which set off a chain reaction,” explains Ken Adams, the radioman aboard USS Edsall who received the Warrington’s distress call. Shortly after noon, 70-foot seas roll the Warrington onto its side, and the destroyer slips stern-first under the sea. Ten vessels comb the ocean for survivors, rescuing just 73 of 321 officers and crew.

On shore, the Statesville Record and Landmark reports: “Red Cross chapters from Delaware to Maine have been placed on alert.” Ahead of landfall, the damage is already beginning. “Morehead City and Beaufort have been cut off from outside communication, because telephone lines east of New Bern have gone out. Police Chief Ed Bellengia of New Bern says he is informed that inhabitants are being evacuated from Beaufort, as a storm precautionary measure.”

United Press International reports from Beaufort the same day: “Mother Nature warned her family of the approaching Atlantic hurricane last night in plenty of time for them to scurry for safety to high ground. Travelers evacuating the beaches reported the head lamps of their automobiles fell upon dozens of rabbits, dogs, cats, and other animals moving inland along the highways.”

The Marine Corps Air Station at Cherry Point is placed on emergency alert. Army and Navy airplanes are ferried inland. Farther south, soldiers at Camp Davis are moved away from Onslow County beaches.

The hurricane slams into the northeastern coast of North Carolina on September 14 and devastates the region from Core Banks to Currituck. Portsmouth Island is temporarily drowned by the surging waters and a tide reported at 14 feet. By 7 a.m., the wind is blowing 86 miles per hour. Before long, it’s more than 100. The streets of Ocracoke turn into rivers.

Big Ike O’Neal, an Ocracoker, opens the front and back doors of his house to let the water rush through and keep the structure from washing away.

Rising waters threaten the Ocracoke Lighthouse for the first time since it was erected in 1823. Keeper Joe Burrus reports that the waters lap at its base and flood the keeper’s quarters half a foot deep before receding. A Coast Guardsman stationed there, on a call with the Portsmouth station, tells his fellow operator that he sees no surge. “And then,” he writes later, “whilst I was talking, I looked out across the lighthouse lawn, and there she was a’comin’, and before I hung up the receiver, she was around me feet.”

Numerous houses on Ocracoke are damaged, and six are completely destroyed; damage is estimated at half a million dollars. The village water tank is knocked down and the islanders are without drinking water. Fifteen evacuees make it to New Bern two days after the storm. Many report that their families have lost everything but the clothes they are wearing.

The storm moves up the coast, striking Hatteras Island. Fishing boats are slammed onto the shoals, damaged or sunk.

Wallace Royce Haywood, a young boy at the time, remembers the hurricane: “We were in a neighbor’s house in Avon, on the second floor — and the water was up to my mother’s knees! I saw houses floating by out the window.” Later, he winds up on the cover of Life magazine, barefoot and perched on a dredge pipe, in a 1947 feature that identifies him as “the 6-year-old son, grandson, and great-grandson of Hatteras fishermen.” 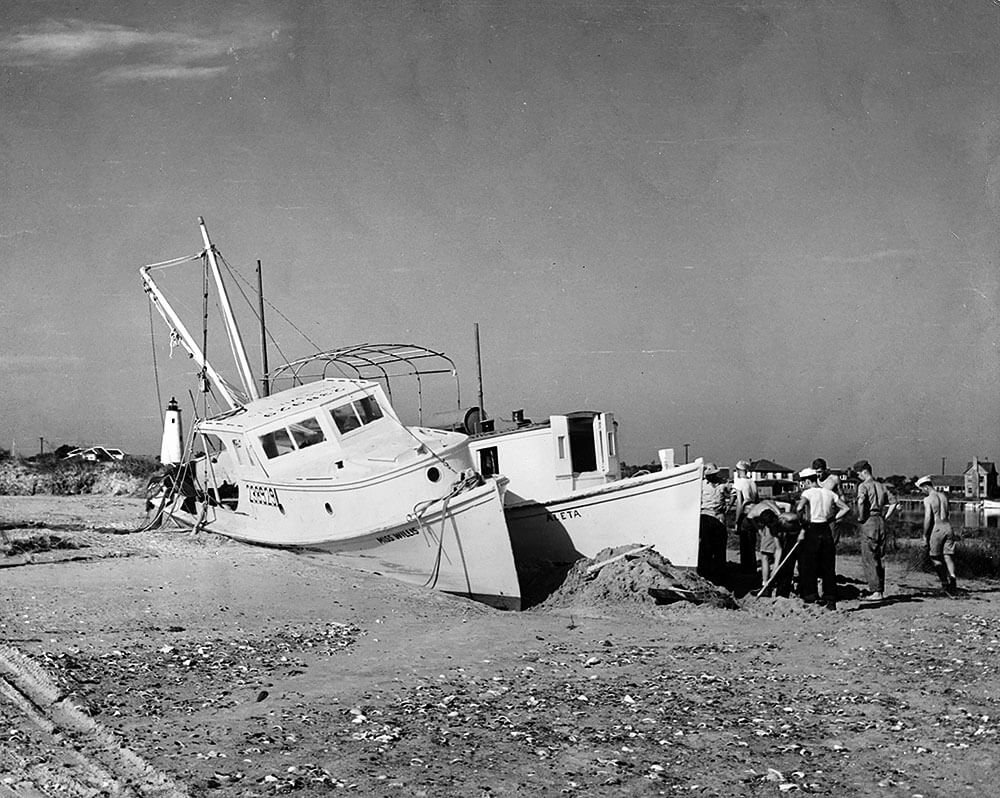 The 42-foot mail boat Aleta ran aground near the Island Inn on Ocracoke. Aleta carried mail and passengers between Ocracoke Island and the town of Atlantic in Carteret County during the 1940s and ’50s. photograph by Ocracoke Preservation Society

O.G. Gray, a merchant in Avon, is worried about a stash of money and war bonds that his fellow villagers have left in his safe. “When it became apparent that everything in the little store might be lost the merchant left his home and rushed to his store,” recounts The Burlington Daily Times-News. “There the water was knee deep. He opened his safe and snatched up the townfolks’ money and bonds and wrapped them in a bundle. He started to go home but when he looked out the front window he saw the turbulent tide carry away his house.”

Gray’s timing is bad — he’s trapped inside the store as the back side of the storm spins in, and the building floats away with him inside. He manages to escape into a tree, where he hangs on for three hours. Avon has become a floating village — houses and sheds rocking past on the waves. Luckily for Gray, his house — with his family still inside — drifts less than a mile before it grounds on sand. Others are carried into the surf. Indeed, moving the surge-scattered houses back to their original sites will prove one of the most vexing tasks that the islanders face. In Avon, only 12 homes are left standing; in Rodanthe, just two remain. Some 300 families seek relief from the Red Cross.

Near Salvo, the Gull Shoal Coast Guard Station is swept off its foundation and carried along the beach for a quarter of a mile before fetching up in the pounding breakers. “Africa was a picnic compared to this,” says Capt. Willie Wescott, who had just returned from fighting Rommel’s troops. “I was just plain scared.” The demolished station goes permanently out of service.

On Bodie Island, “L.S. Parkerson, hotel proprietor at Nags Head, was shocked unconscious Thursday by a live wire falling on his car,” reports the Statesville Record and Landmark. “He died later.” He is the lone civilian fatality in North Carolina.

Waves breaking 100 feet high sink two Coast Guard cutters — the Bedloe and the Jackson. Both are sunk off Oregon Inlet while escorting the torpedoed Liberty Ship George Ade in sight of the Bodie Island Light. The Liberty Ship somehow makes it safely into port.

“Struck four times by towering waves, the Bedloe tossed like a matchstick in the ocean before going down,” the Coast Guard reports. The entire complement of 38 officers and crew abandon ship safely. “However, the strain of fighting the hurricane aboard the 125-foot cutter, plus the ordeal of hanging to life rafts for more than 50 hours, proved too much for most of the waterlogged men, and only 12 were able to hang on until rescued. One man slid under the water only minutes before the rescue craft came into sight.”

Of the Jackson, the Coast Guard details an equally grim fate: 25 men, including the 23-year-old skipper, Lt. Norman D. Call, go down with the ship.

Coast Guardsmen from the Kill Devil Hills station — descendants of the men who once helped launch the Wright brothers into history — spend the day rescuing stranded residents. The wind is so fierce and unrelenting that, as the day wears on, it’s no longer possible to walk upright. One of the refugees inside the station, J.A. Burglass, reports that “it was necessary for them to crawl on their bellies when they went out shortly before noon.”

The wind is blowing so hard, the sand it picks up scours the paint off automobiles and blows most of the water out of the Pasquotank River.

According to the Elizabeth City Daily Advance, “Not in its entire history has Roanoke been utterly isolated from the outer world.” In Manteo, floodwaters crest five feet above ground-floor level. At Fort Raleigh, home of The Lost Colony theater, the tops of centuries-old pine trees are twisted off, leaving a swath of jagged, 20-foot-high stumps.

From Elizabeth City, the Associated Press describes the damage: “Storm tides reaching 12 inches higher than any in the history of tropical storms on Roanoke Island inundated Manteo to a depth of six feet in Thursday’s storm, while the wind leveled the plant of the Manteo Shipbuilding Co., engaged in war contracts for the Department of the Navy, according to the first authentic reports reaching here from the isolated island.”

Wanchese, at the southern end of the island, fares even worse, bearing the brunt of a 10-foot tidal surge that wipes out 3,000 feet of causeway, along with a bridge linking it to Nags Head. North along Route 158, the bridge at Coinjock has been seriously damaged by a barge torn adrift from its tow, closing the highway. 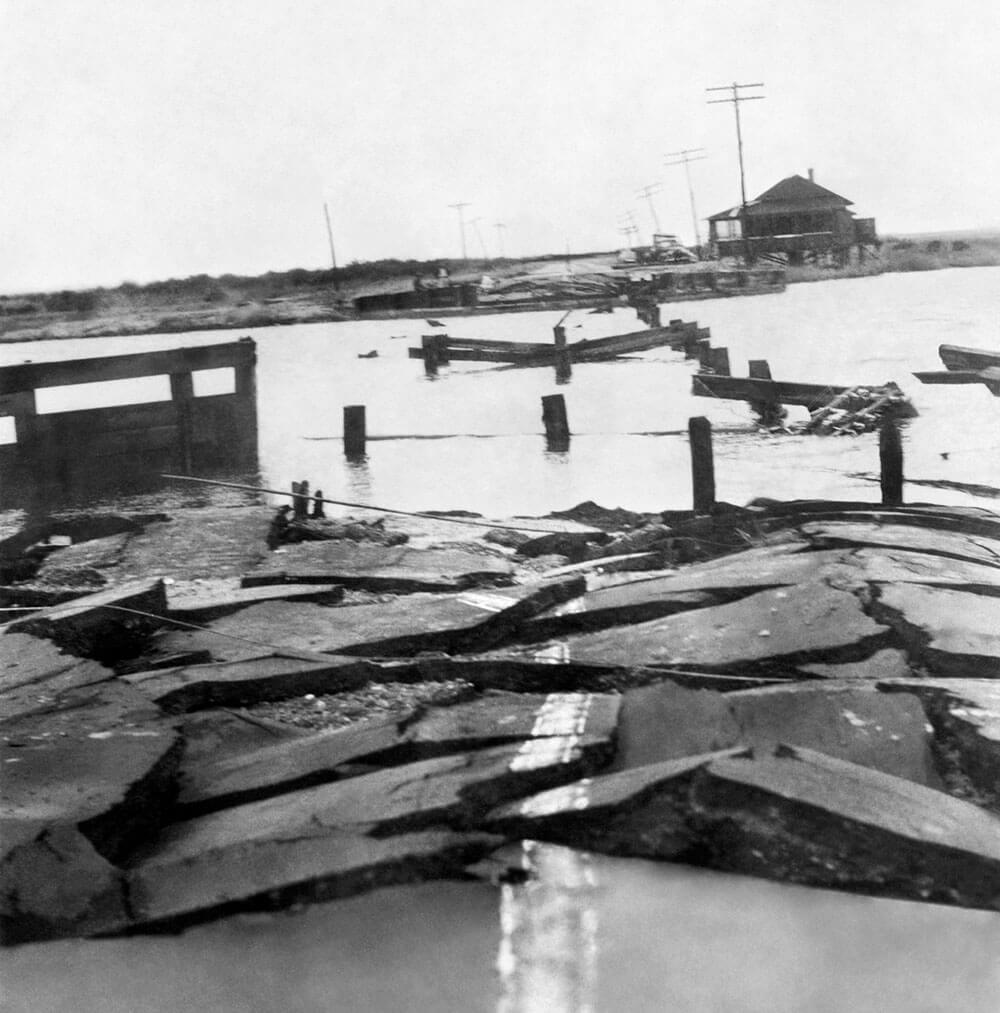 The damage the hurricane did to bridges along the Outer Banks cut off communities like Manteo from civilization in the storm’s aftermath. photograph by Ocracoke Preservation Society

When reports reach Gov. Joseph Melville Broughton that private operators are charging the outrageous sum of $5 each way to ferry cars across the narrow Intracoastal Waterway, he decrees that until the span is restored, the state will provide free ferry service.

With the water supply contaminated by the over-washing salt water, islanders have no source of potable water. The American Red Cross provides two distillation plants that can produce a combined 20,000 gallons of fresh water.

The Great Atlantic Hurricane whirls north, inflicting damage as far as the Canadian Maritimes. By the time it dissipates in the cold Labrador waters of the North Atlantic, the storm has claimed nearly 400 lives — 344 of them military personnel, including those who perished on the Warrington, Bedloe, and Jackson.

The storm leaves a wake of wreckage almost 1,000 miles long — the shattered aftermath of great natural violence. On the North Carolina coast alone, 108 buildings are destroyed and 675 others are seriously damaged, and property and crop losses total $1.45 million.

Despite the widespread devastation up and down the coast, little is known to those living inland. The Red Cross report compiled by officials who overfly the trail of flattened villages is classified for “reasons of security.” Due to wartime paranoia, reports about the strength of the storm and the destruction it causes are censored, lest U-boat captains lurking offshore pick up the news and move in to take advantage of the chaos onshore.

Ken Adams, the radioman aboard the Edsall who logged the final distress call of the Warrington, has a different, firsthand take on the hurricane: “It is difficult, at best, to describe this event,” he writes. “Anyone not involved cannot understand the severity of the storm. Anyone involved can never forget.”

Special thanks to Mary Ellen Riddle, Education Curator, Graveyard of the Atlantic Museum.

Larsen Eric. “Shore battered by hurricane of 1944: Towns in ruin this week 73 years ago.”