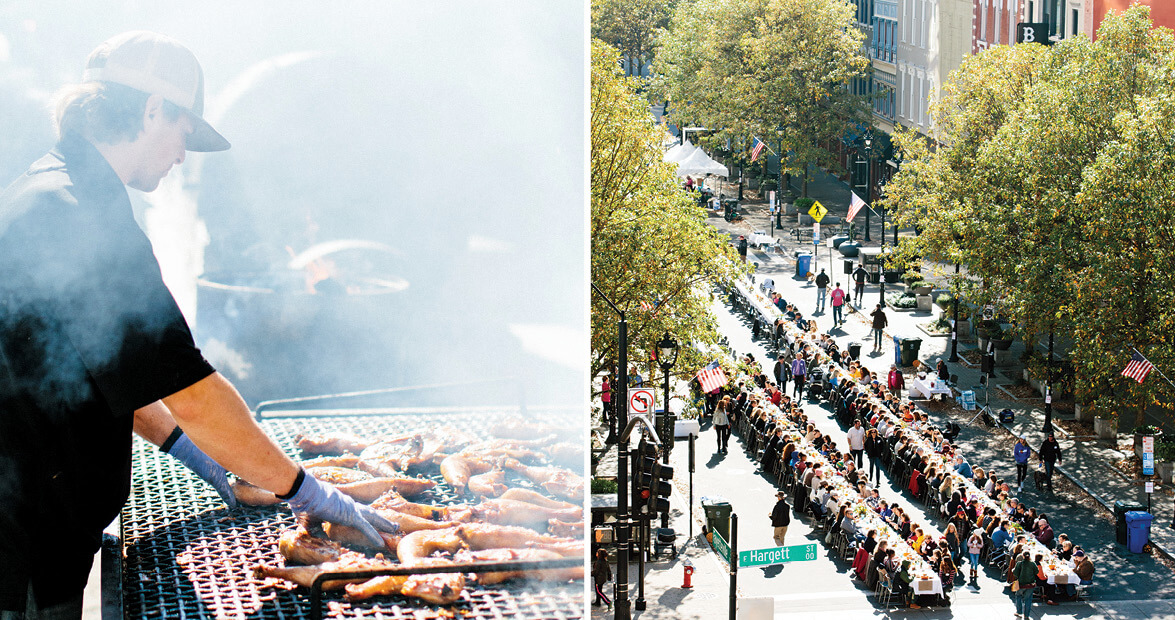 Dozens of dinner tables stretch down Fayetteville Street, anchored by the State Capitol at one end and Memorial Auditorium at the other. Hundreds of volunteers prep drink stations, set out more than 1,000 chairs, and decorate the tables with seashells and sand dollars. Chefs and pitmasters are finishing their dishes, including gallons of Brunswick stew, 90 racks of glazed pork ribs, and 1,000 smoked chicken quarters. Checking in on all of them is Raleigh chef Scott Crawford, who helped bring these folks together on this Sunday afternoon. Crawford often cooks for charity dinners, but today, the logistics are mind-boggling: He’s serving up North Carolina’s signature dishes at a sit-down dinner that spans two city blocks.

The plan didn’t start that way for Crawford. The chef, who owns the acclaimed Crawford and Son restaurant, had heard that the team behind The Sunday Supper organization was planning an event for hurricane relief, and he wanted to do something, too. “This time, it really hit home. I thought Hurricane Florence was going to sit on top of Raleigh,” Crawford recalls. When the storm bypassed his city, he says, “I was celebrating that — and then I started hearing from my friends who got hit by the storm. I felt like I needed to do something.”

Crawford reached out to a handful of chefs who he thought might consider cooking for a fund-raiser. He also contacted developer John Kane, who owns The Dillon, an 18-story office tower downtown. Crawford hoped to use the building’s rooftop restaurant space for the event. Kane was willing but had one request: “Can I put you in touch with Willa?” he asked. “She wants to do something.”

Willa is Kane’s wife and a community volunteer who says her greatest skill is connecting people. Before Crawford talked to her, his ambitions were modest relative to what the group eventually cooked up. “I thought we would do a little dinner and raise $50,000,” he says with a chuckle. But when Willa Kane brought The Sunday Supper team to Crawford’s restaurant a few days later to discuss what they envisioned, that “little dinner” ballooned into two suppers for the ages. 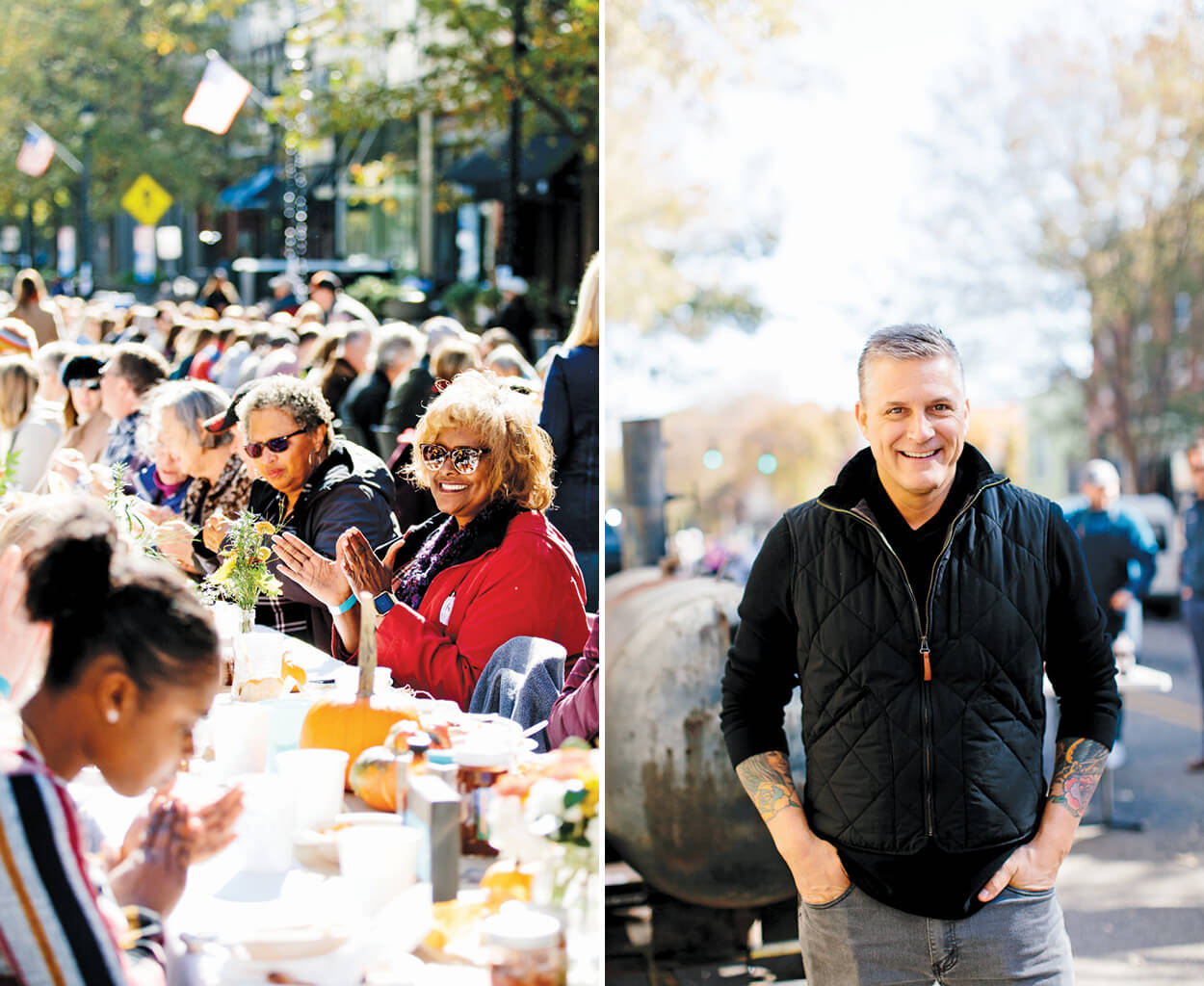 Three weeks. That’s how long Crawford and The Sunday Supper crew had to whip up their plan: white tablecloths fluttering up and down Fayetteville Street and a cross-section of the city gathered for a meal cooked by top chefs. Crawford was aware that the team had pulled off a similar event two years earlier, but he wasn’t familiar with the fine-tuned process that they had developed to launch these big dinners. “They had the infrastructure to pull it off,” Crawford says. “As we were sitting in that meeting, I’m learning what they do — a national template for fund-raising — and I was blown away.”

The first Sunday Supper was in 2016, after Hurricane Matthew dealt a devastating blow to the North Carolina coast and farther inland, killing 28 people and causing $4.8 billion in damage. The group began with a phone call between two Raleigh fund-raising and public relations professionals with roots in eastern North Carolina: Joyce Kohn, who grew up in Morehead City, called Harris Vaughan, a native of Edenton. “We were worried sick that eastern North Carolina was going to get left behind,” Vaughan says. “I asked, ‘What are we going to do?’”

Kohn’s response: “I’ve got this crazy idea. I cannot do it by myself.” Her idea: stretch a long dinner table down Fayetteville Street for a 1,000-seat dinner that would raise money to help others. The youngest of seven children, Kohn has strong memories of her family’s Sunday suppers. “There was no radio, no television. The phone was off the hook. There was so much nourishment beyond the food at the table,” she says. “I didn’t realize how important it was to me until that hurricane — and that acrimonious presidential campaign, which led to our work places, churches, and homes being fractured. But these are all our people. We needed to do something for our people.”

They chose the Sunday after the 2016 presidential election for the first event. But that meant that they had only 30 days to prepare. One of the first things Vaughan did was ask one of his employees, Greyson Kane Sidebotham, to call her mother. Willa Kane quickly joined the team.

On the morning of the first big supper, more volunteers than were needed started showing up at 5:15 a.m. to set up tables and chairs. Diners came to feast on chopped barbecue, coleslaw, hush puppies, and sweet tea. But in the process, the meal became more than a fund-raiser for hurricane relief: It was proof that despite political disagreements, strangers can come together to share a meal for the common good. The Sunday Supper sold out and raised $189,000 for communities hard-hit by the hurricane.

“We were tapping into something in people’s hearts and souls,” Vaughan says. “It was warmth and humanity on display. It wasn’t red. It wasn’t blue. It wasn’t black. It wasn’t white. It was people. And there was a need for it.” 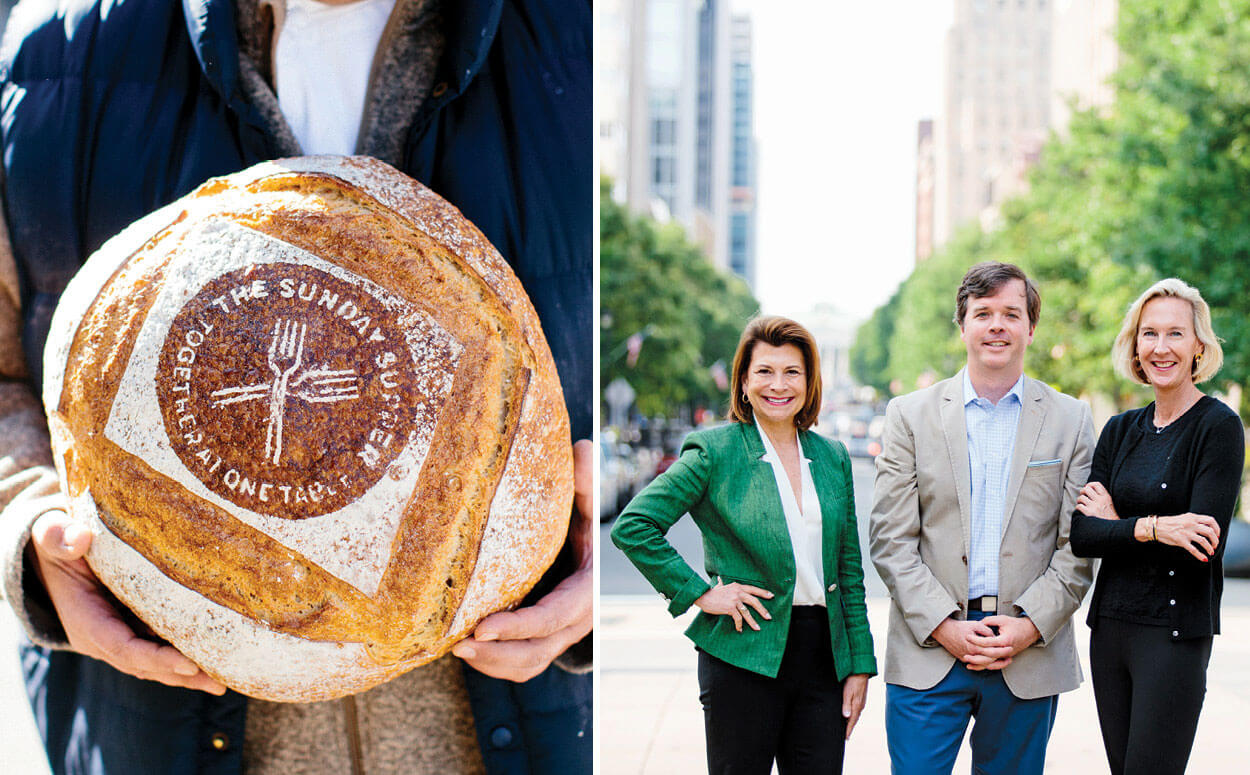 Kane, Kohn, and Vaughan realized that The Sunday Supper could be replicated by community leaders anywhere as a way to respond to those communities’ needs. Their mission expanded from a one-time hurricane relief project to addressing incivility, too. Their bipartisan group formed a nonprofit and created a shareable, digital tool kit to move The Sunday Supper beyond Raleigh.

Kane recruited Courtney Crowder, who served as a legislative director and senior advisor to former Gov. Beverly Perdue, to join the board. The mission to find a common cause resonated with him. “It seems we have to remind ourselves that we don’t have to agree on everything,” Crowder says. “We need to create space in the community during a time when our national discussion is hardened and lacking a certain amount of empathy. I think Sunday Supper goes wherever a community needs it to go. It could be around a natural disaster. It could be around persistent poverty. It could be around a racial episode. That’s when Sunday Supper is at its best. People see themselves in it. It’s an open-source document that can address your community’s need.”

The idea has spread. In Charlottesville, Virginia, community members organized a Sunday Supper after a white supremacist rally left three people dead and 34 injured in August 2017. In Durham, James Glenn, a business owner and former Duke University football player, helped organize an April 2018 supper for 500 people at the American Tobacco Amphitheater, which raised more than $100,000 to address food insecurity.

Then came Hurricane Florence, which dropped as much as 30 inches of rain in some areas of eastern North Carolina, resulting in catastrophic flooding. The storm caused the deaths of 40 people and resulted in $17 billion worth of damage.

That’s when Chef Crawford connected with the Kanes. The little dinner that he thought might raise $50,000 turned into an event at The Dillon that raised eight times that much: $400,000. And the Sunday feast for 1,000 along Fayetteville Street, between Martin and Morgan streets, raised another $50,000. Crawford has also joined The Sunday Supper board, which is focused on awarding grants to restaurant owners, farmers, and fisheries in eastern North Carolina; spreading the word about this fund-raising tool; and bringing people together. “If this is how we can model being unified again,” Vaughan says, “let’s set some tables.”