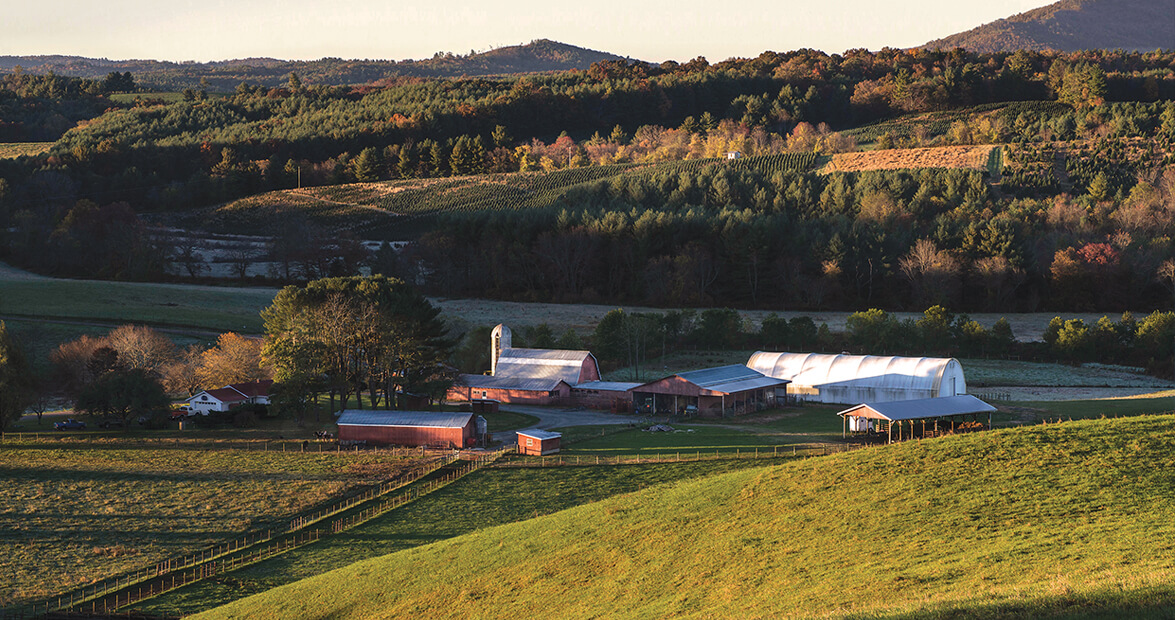 Alleghany County is a canvas of undulating pastures framed by woods and modest mountains, with big red barns and white fences and curvy roads along hillsides with ribbons of Christmas trees. When Frances Huber gazes on this scene from her hilltop house in Ennice, she feels a rush of gratitude and vitality, even after the pain of loss and heartache.

“I love my farm,” she says from her living room, where the white pines outside look ghostly on this misty fall day. “Each day I pinch myself that I’m allowed to live here.”

Growing up a city girl in Atlanta who dreamed of living on a horse farm one day, she began coming to Alleghany County as a 10-year-old in 1948, and became enthralled with the scenery. Decades later, after raising six kids, she and her husband, Andy, had had more than their fill of Atlanta and decided to do their happily-ever-after-ing up here. They explored the country roads on weekends, and came across an abandoned dairy farm off Big Oak Road with its barns and fences in shambles. As Frances remembers it, “Everything was horrible.”

But its potential was undeniable: hills sculpted as if by a potter’s hands, a creek meandering through the folds, a wide-angle view of Bullhead Mountain. In 1994, they bought the land, built their house on a hill, and named this place Brush Creek Farm. 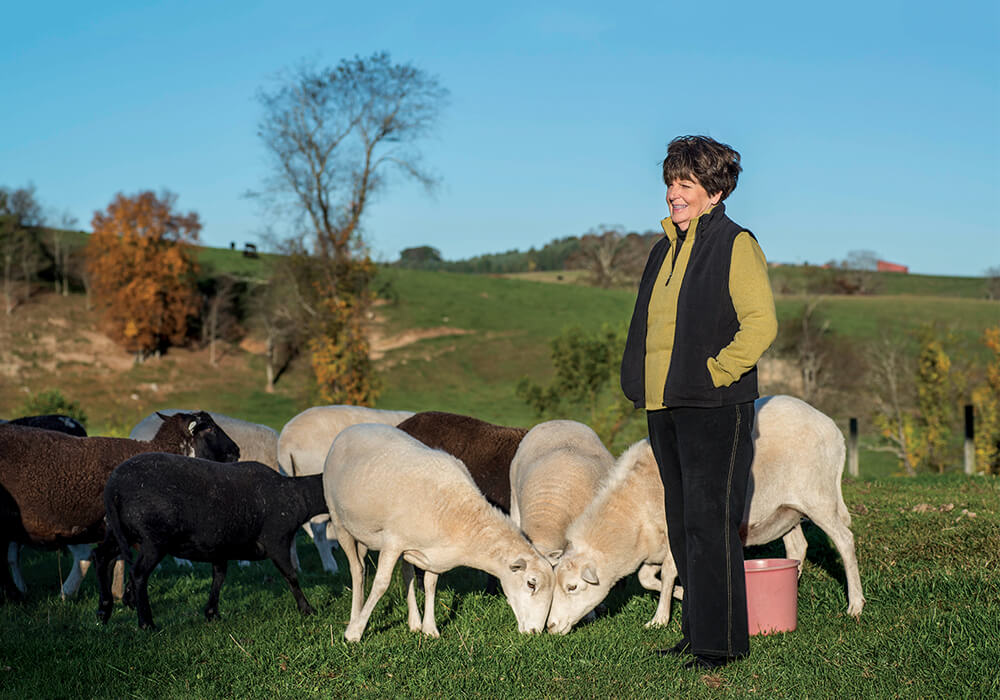 Frances Huber still owns Brush Creek Farm, but others help run it. “I felt like I was running Carowinds by myself,” she says. photograph by Lissa Gotwals

Andy, who’d earned an agriculture degree from Cornell University, was living a dream. He never tired of driving his Kubota tractor across the pastures, whether he was baling hay or plowing 20 inches of snow from the driveway. But then came the agonizing backaches, which led to an appointment with the chiropractor, who noticed a growth.

Andy was diagnosed with sarcoma of the spine, a vicious form of cancer, and after a long fight, he spent his last weeks at home on the farm. After he died on November 5, 2000, at age 70, Frances was alone, grief-stricken yet at peace, with a 200-acre farm. “Everybody said you’ve got to come back home,” she says. “I said this is home.”

Within three months of her husband’s death, Frances began hatching plans for a petting farm. Someone gave her a pot-bellied pig named Bacon. She acquired chickens, llamas, miniature horses, miniature donkeys, and miniature goats. In 2001, she opened the farm to city kids, calling it The Little Farm, a nod not only to her animals, but also to her own petite five-foot stature.

The loneliness could have been stifling. But educating herself about farming — Googling facts about rare sheep and healthy field grasses, asking locals lots of questions, and watching wide-eyed kids come face-to-snout with goats — gave her a new purpose. “When we moved here, we reinvented ourselves,” she says. “But I did it with my husband. When he died, I reinvented myself.”

“Everybody said you’ve got to come back home. I said this is home.”

Frances no longer runs the petting farm, but she still has a working farm where she raises Angus beef cattle, pigs, and sheep, the meat from which she sells locally. She employs a couple of farm managers who share her interest in sustainable farming. In 2013, Frances was named runner-up for the North Carolina Outstanding Conservation Farm Family award. Her cows, about 80 of them, are all “finished” on grass — no growth hormones, no antibiotics, no grains. “People are wanting to buy local, and they want healthy-raised local,” she says.

Her cows graze in a different area each day, allowing the grass to regrow before the animals feed on it again, a method that saves her thousands of dollars in fertilizer costs. She also fences off the cows from Brush Creek, which flows through the farm, so they don’t muddy the waters; instead, her farm uses a pipeline to provide water for livestock. These methods earned her an Animal Welfare Approved certification, which guarantees that her products are raised in a healthy, environmentally sound manner.

Frances Huber is now 78 years old, but looking over that landscape stirs a youthful verve. It’s the very picture of serenity, this billowing patchwork of field and forest. “I can look out my window and say ‘wow,’” she says, “and I still do after all these years.”

Brush Creek Farm meat is sold at Alleghany Meat Market in Sparta and, seasonally, at farmers markets in Alleghany County and Independence, Virginia. It can be purchased online at alleghany.locallygrown.net. Residents of Raleigh and Durham can place orders for home delivery by emailing jcoman103@yahoo.com.