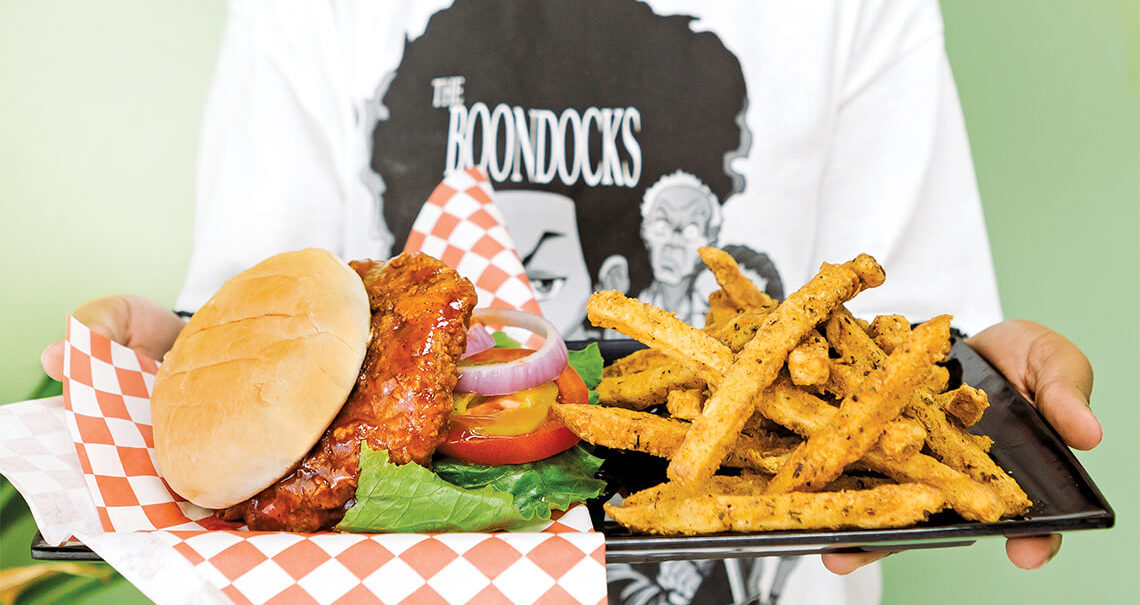 At many a meat-and-three restaurant, I’ve occasionally eschewed the fried chicken or pork chops in favor of a vegetable plate. The list of vegetable choices is at least as long as the meat offerings: butter beans, corn, pinto beans, and green beans — plus, bafflingly, deviled eggs and mac ’n’ cheese. I’d smugly tell myself that I was going vegetarian for a meal. But at these beloved diners, the threes are often meaty, too, liberally seasoned with fatback or ham hock.

In the late 1970s, my college roommate and I drove from Chapel Hill to Raleigh, which, before the interstate existed, was a haul. We were traveling beyond the vegetable plate to a restaurant that served no meat or seafood at all. Just vegetables.

A whole meal without so much as a sprinkle of bacon? Beans without a hunk of pork? Back then, the idea appealed to our rebellious sides. So did the restaurant’s name: Irregardless.

Chef Arthur Gordon opened Irregardless Café in 1975 as one of the state’s first all-vegetarian restaurants. He offered vegan dishes, which, in addition to meat-free, contain no dairy products or eggs. Over the years, the restaurant added seafood and meat to the menu but retained a strong vegetarian and vegan bent, which continued after Gordon retired and sold the place in January 2020. 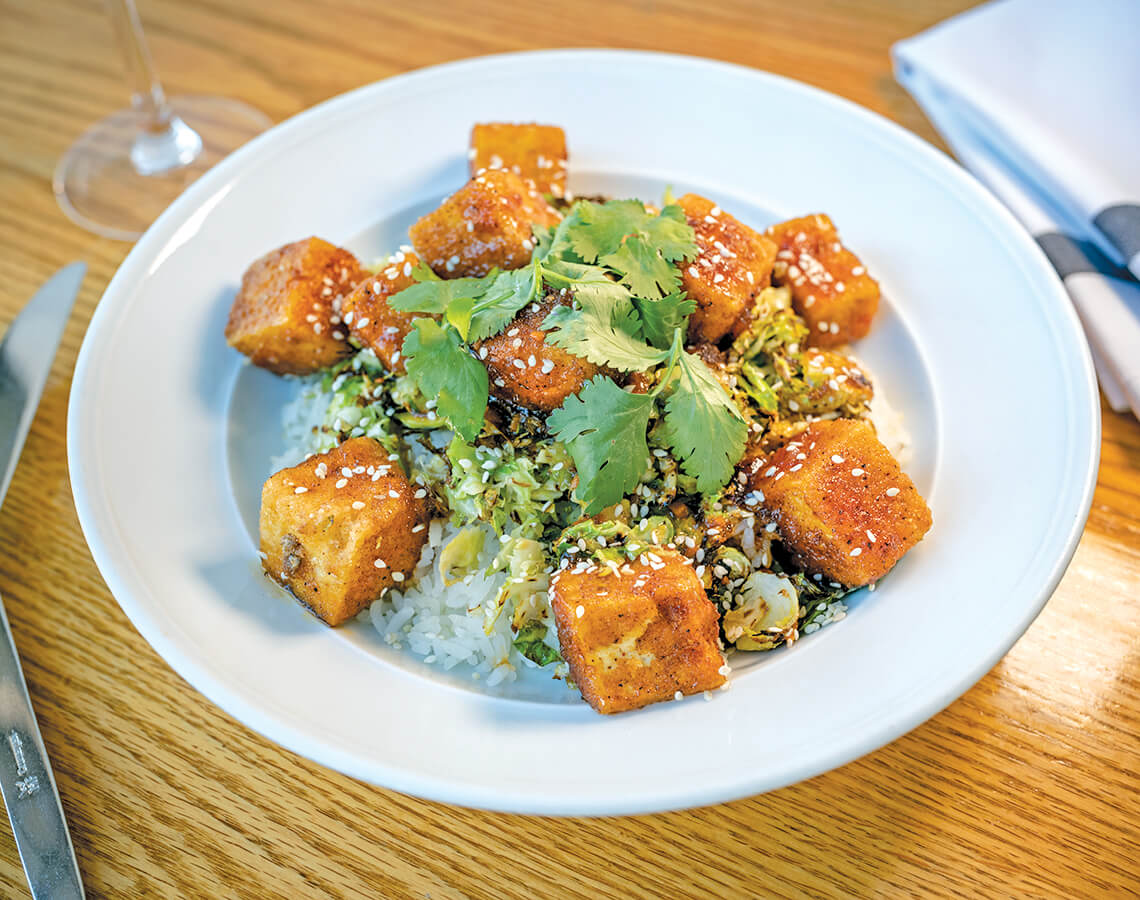 “Irregardless” of its grammar-challenged name, this Raleigh spot is legendary, and its maple-and-sesame-glazed crispy tofu (above) is a staple. photographs by Charles Harris 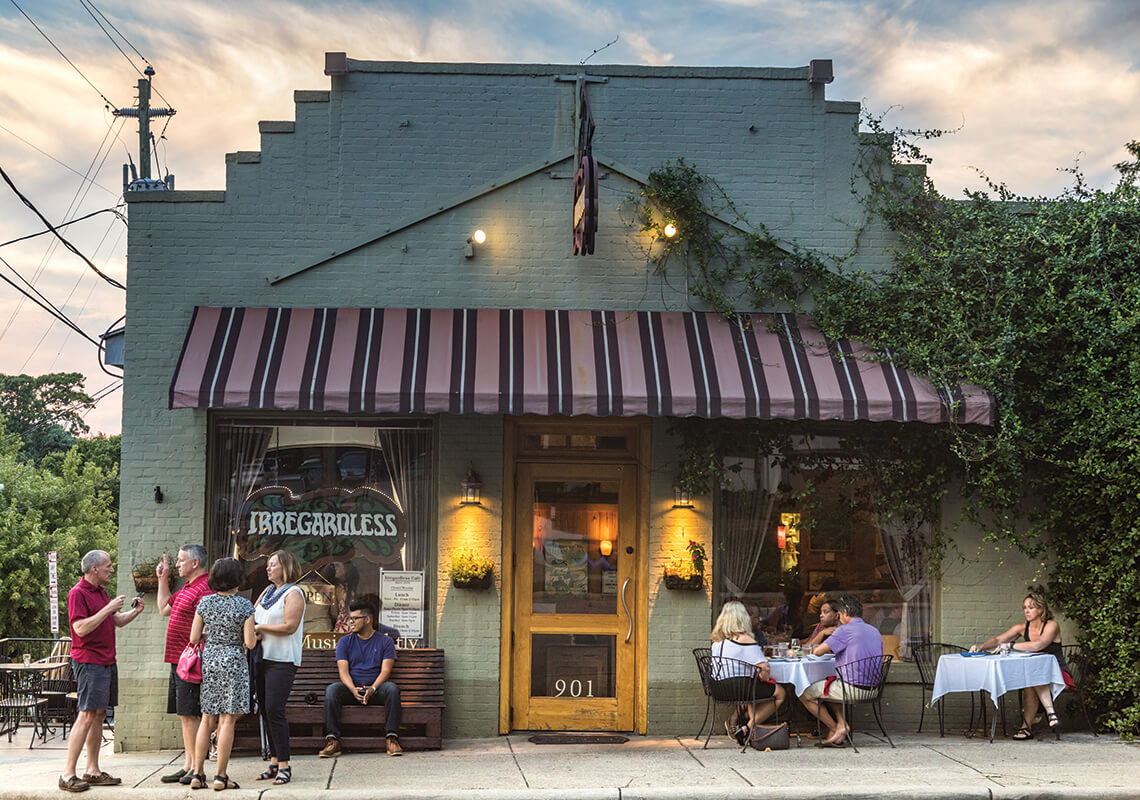 Since the ’70s, vegetarian and vegan dining in North Carolina has evolved from the granola-eating hippie stereotype to a movement that’s gained mainstream attention. Today, exclusively plant-based restaurants serve Italian favorites and cookout classics, plus creative, upscale dining. And some have given meat-free makeovers to the comfort food of meat-and-threes.

Dilip Barman, president of the Triangle Vegetarian Society (TVS), has seen — and tasted — the changes. He recalls that when he moved to Durham in 1992, the choices were slim, other than Indian restaurants, which reliably offered meat-free options. Now, it’s a different world, especially if you include restaurants that are not entirely meat-free but have expanded their vegan and vegetarian offerings. In the ’80s, a handful of members attended TVS’s first vegan Thanksgiving event; in 2019, there were almost 700 participants.

“I think the thing that helped the interest grow in the past five to seven years was the focus on health. Then, Bill Clinton went mostly vegan, and you had pro athletes and actors going vegan,” says Barman, who is also vegan. For many people, Barman says, following a plant-based diet has also a become part of larger focus on environmental and human rights issues, and efforts to make the world a better place. “Kids focus on saving animals,” he says. “With young people, they focus on the environmental impact of producing meat.”

The number of Black-owned vegetarian and vegan restaurants in the state reflects a growing interest in those diets among African Americans. A 2016 Pew Research Center survey showed that 3 percent of all adults in the U.S. identified as vegan, jumping to 8 percent specifically for Black adults. Well-known Black vegans include actress Taraji P. Henson, filmmaker Ava DuVernay, and New Jersey Senator Cory Booker.

Velvet Jacobs, who opened Veltree in Charlotte in 2018, also works as a chef for singer and vegan Erykah Badu. Jacobs grew up on traditional Southern food in New Hanover County, and she wanted to offer the flavors of her grandmother’s cooking, but from Jacobs’s own vegan perspective. Her menu of classic soul food, including fried “chicken” and mac ’n’ cheese made from soy-based cheese, is all vegan.

“I’ve noticed more interest from people of color. Our community’s getting into it as we’re learning more about health disparities we’re faced with as African Americans. We’re looking for ways to live longer and feel better,” Jacobs says. “Performers going vegan absolutely gets people’s attention.”

Jacobs says that offering plant-based versions of meat-and-three favorites can help carnivores feel at home and make those who are looking to change their diets more comfortable with the switch. It’s also the kind of food that Jacobs loves. “With vegan soul food, we’re keeping the family tradition alive, keeping the culture alive, to be about family, food, and having a good time,” she says.

In the fine-dining world, vegan and vegetarian chefs pay the same attention to flavors, ingredients, and plating as others would. The complex dishes at Plant in Asheville have earned the nine-year-old vegan restaurant attention from Zagat and Food & Wine magazines. Vegan cheese is made in-house and appears in such dishes as ravioli stuffed with almond ricotta and cremini mushrooms. And that bacon on the Caesar salad? It’s actually smoked trumpet mushrooms.

As for that long-ago dining adventure with my friend, we didn’t emerge ready to abandon meat-and-threes, but we learned an important truth: Vegetables can taste good without ham hocks.