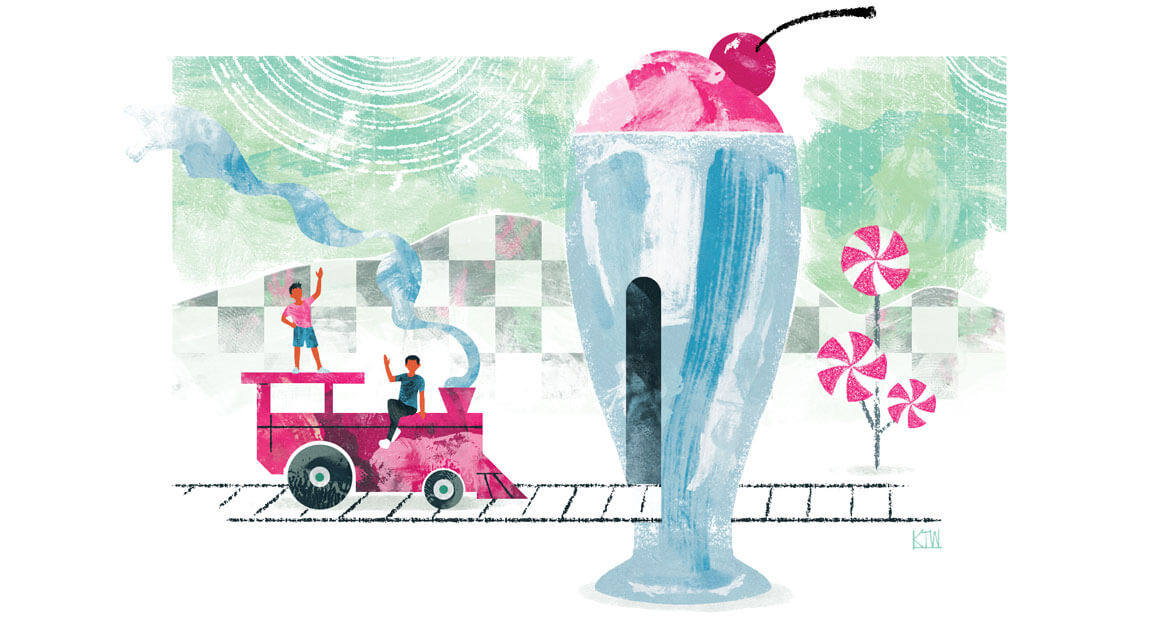 “Did you know the building’s been here since 1923?” Laura Holloway asked us. She dropped menus and napkins at our booth and then walked to the back corner of Royall’s Soda Shoppe in Elkin, where she flipped a switch. She smiled on her way back by. “I wanted to turn the train on for your boys,” she said, and sure enough, a model train emerged from a hole near the ceiling to run back and forth along a track at the top edge of the wall. My kids came almost, but not quite, all the way out of their skins. I’d already promised them world-famous hot dogs and sodas and milkshakes — a proper soda fountain experience — and now there was a train, which would be the cherry on top of all of this, if there weren’t soon going to be an actual cherry on top of all of this.

This is the Holloways’ second time owning Royall’s, Laura told us. They sold it a few years ago but missed it so much that they bought it back. Her brother, Austin, is the cook, and her mother, Tina, waited tables for Ed Royall when she was in high school, back when the shop was still a working pharmacy. Everything about the space screams time machine: the original glass block windows, the paneling on the walls, the original tile floors. There’s a warmth about it, which I note because when we visited, it was 38 degrees and pouring rain. I know: Soda shops and milkshakes are often enough dressed in the clothes of summertime, but when Brian Holloway, Laura’s dad, swung by the table to bring us homemade potato soup, I don’t know if any of us had ever felt more like we were in exactly the right place at exactly the right time. My older son, The Toad, took a big bite, and Brian asked him what he thought. “I wish I was the size of an ant so I could jump in this bowl and swim in it,” he said. High praise, I assured Brian, who laughed, shook his head, and brought us a couple more spoons.

At Royall’s, the sandwiches arrive on white waxed paper in red plastic baskets; the napkins hunker in a stainless steel table dispenser. My kids loved their hot dogs and cherry sodas, and the Toad stole my notebook to draw the train. Laura stopped by the table again to check to see if we were good, and we were — good, that is. Everything felt easy and comfortable, and the kids were relatively well-behaved, which is what comes with the promise of a milkshake.

About those milkshakes: served in glass glasses and huge, larger than either child’s face. Peppermint for my kindergartner, The Wee, and chocolate for The Toad. Whipped cream and a cherry on top. We sat at the counter for a while, but soon enough it was back to the booth, to the wood-paneled walls and round mirrors. Etched into that paneling are decades’ worth of signatures and names and hopes and dreams. Josh and Arie 4ever. Amanda W + Timmy. BB & GI, the initials circumscribed by a heart. Laura brought us a framed black-and-white 8 x 10 from 1955, high schoolers in starched shirts and likely poodle skirts filling these same booths. There are the same round mirrors hanging behind the kids. My sons had just one question for the Holloways: Could they sign their names on the wall, too?

Brian said sure, he’d look for a Sharpie, but The Toad stole my green pen and started right away carving his name into the wall. The Wee went next, signing the trim around one mirror. There are thousands of names on that wall, years and years of people saying we were here. That’s the thing about a soda shop, a proper drugstore, a lunch counter on Main Street. We want to remember those folks who sat in these booths before us. We want to bring our kids to places with history to show them a slower life. We want them to feel the urge to say they were there, too. We sat in booth 2R. We signed our names. The train came by again and again. The cold rain poured down. We had milkshakes. We were warm, and safe, and happy.