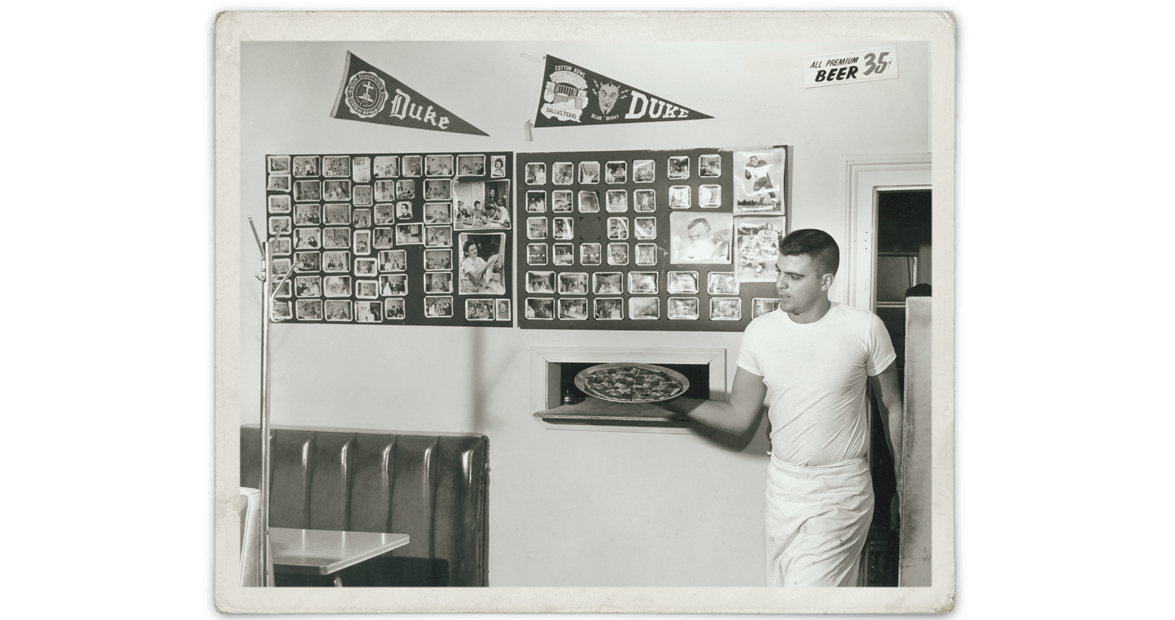 In the late 1960s and ’70s, when Western Carolina was still a college, a popular spot for students was the Cat’s Den. The main draw was likely the free cups of beer handed out with your meal: Jackson County being dry back then, the nearest beer to buy was 25 miles away in Waynesville. But the other draw was that the Cat’s Den was a pizza parlor. “Pizza was sort of a novelty back then. The only pizza I ever saw were those Chef Boyardee pizzas,” says Norman West, 72, who helped open the original Cat’s Den. It turned out, the town of Cullowhee was hungry for pizza — even if they didn’t know it — and the Cat’s Den quickly became a nightly scene. Today, when alumni from that era gather to reminisce, stories eventually lead back to those wooden wire-spool tables, the cold beers and cheesy slices.

What folks came for was the particular hospitality of a pizza parlor.

The pizza, West admits, wasn’t great, but it became so when new owners turned the hangout into Speedy’s and added more pizza toppings (like ham and pineapple) and pasta dishes to the menu. West, who regularly dines at Speedy’s — now located in Sylva — once heard a Realtor say that Speedy’s is often the deciding factor for whether a client buys a home in Waynesville or in Sylva. That means a lot to Charlie Schmidt, whose family is the third owner of the restaurant. “As far as pizza goes,” he says, “we haven’t changed anything.” 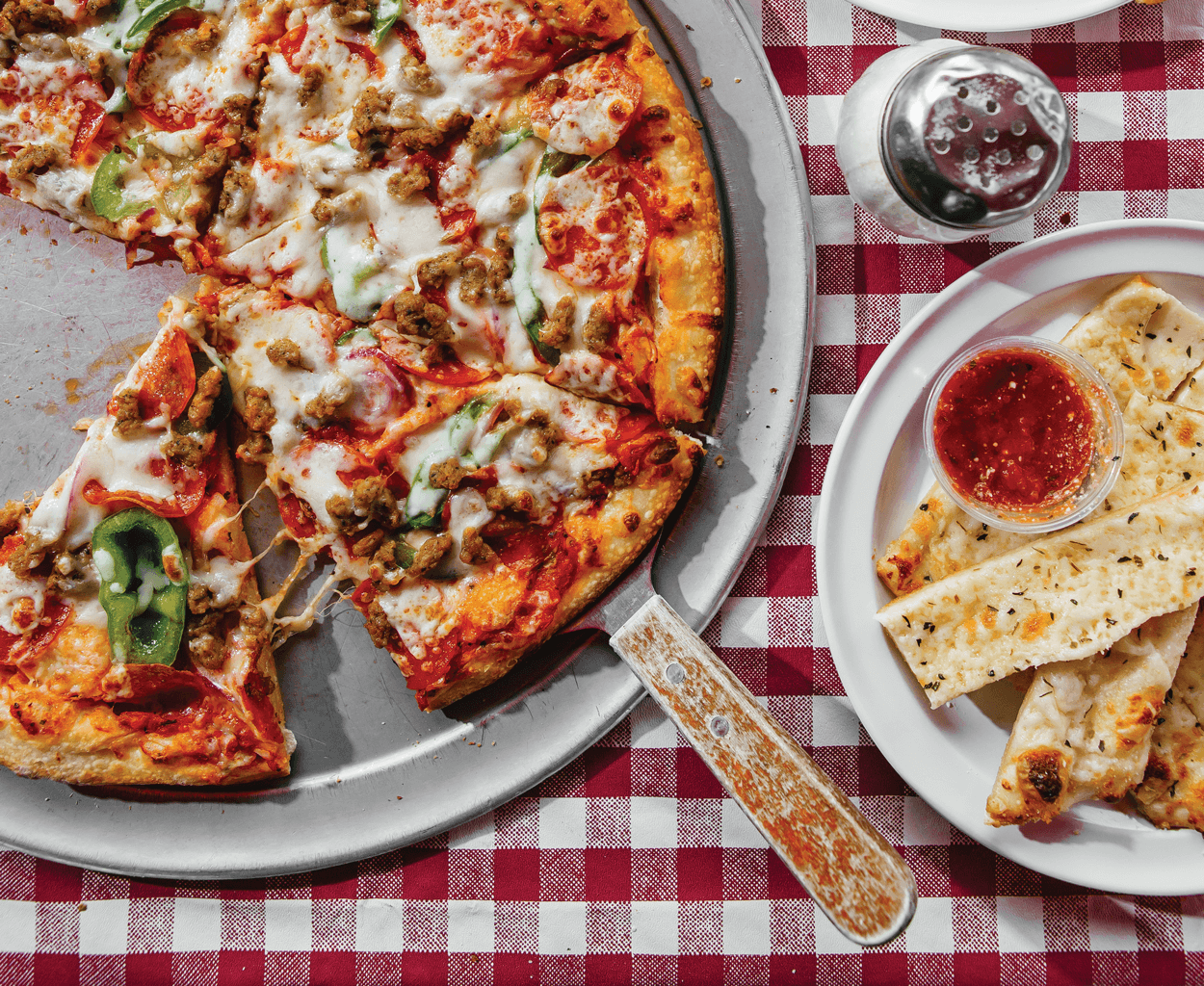 Classic, thick-crust slices are the specialty at Speedy’s in Sylva, which started as the Cat’s Den restaurant in Cullowhee. photograph by Tim Robison

Which is how it ought to be with the pizzas of our youth. Much of what we love about old-school pizza joints has to do with the fact that they’re time capsules. By not changing — the red-and-white oilcloths, the photos of local celebrities on the walls — they remind us of what they meant to us, and who we were then, back when we made a beeline to our favorite table, ordered our usual, and fell under the spell of friendship and hot pepperoni.

In the 1950s and ’60s, pizza places started popping up all over the United States, appealing to an interest in Italian food sparked by soldiers who had served in World War II. Decades later, when pizza was commonplace in most parts of the country, these restaurants were still introducing small-town Southerners to new flavors and, for some, a chance to feel sophisticated — after all, in rural North Carolina, Italian fare was considered foreign food into the 1980s. But once a pizza parlor opened, it didn’t take long for it to become as much a part of the local dining scene as any country kitchen. That’s because what folks came for — and still crave — was the particular hospitality of a pizza parlor: the warmth, the familiarity, the larger-than-life personalities behind the counter.

That allure is evident at Italian Pizzeria III, one such beloved place on Chapel Hill’s West Franklin Street. IP3, as regulars call it, got its name from being the third restaurant opened by a family friend of Angelo and Vincenzo Marrone. In the mid-’90s, the Marrone brothers came from Naples to take over IP3, which originally opened in 1980. When asked why the restaurant has remained popular with college students, faculty members, and locals, Angelo doesn’t miss a beat: “Us!” he says. “Me and my brother.”

And he’s not wrong, according to Gary Crunkleton, who owns The Crunkleton cocktail club down the street. Crunkleton, who eats at IP3 more often than he wants his wife to know, loves taking his three sons there to watch international soccer matches. The brothers rev up the crowd with their pizzas, cheesesteaks, and well-timed airhorn blasts. “When those guys get it going,” Crunkleton says, “it’s like they’ve invited you into their home. It makes everyone want to be Italian.”

On the other end of the rowdy spectrum — and down the way on Franklin Street — was Pepper’s Pizza, which was open for 26 years. Diners queued up behind a headless mannequin sporting the words: “Please wait to be seated.” The waitstaff were known for their piercings, tattoos, and brightly colored hair. “Pepper’s was the place to be,” recalls Bonnie Rochman, a UNC Chapel Hill graduate from Fayetteville. “For a kid who grew up in a military town, to have sun-dried tomatoes was mind-blowing,” she says with a laugh.

College life was — and still is, to some extent — fueled by pizza. Annamaria’s Pizza House, known as Bat’s, served generations of Duke University students. Around 1950, Bartholomew “Bat” Malanga and his wife, Annamaria, came to Durham from New Jersey so that their critically ill daughter could receive medical treatment at Duke. Their daughter survived, and the family decided to stay. Bat worked as a mason, and Annamaria cooked at the Dope Shop, an on-campus soda fountain, where the students pestered her to make pizza for them.

College life was — and still is, to some extent — fueled by pizza.

“A lot of people who went to Duke were from up north — they wanted pizza. In the South, it was a new thing,” says Rosemary Kearney, the Malangas’ youngest daughter, who used to wait tables with her father. (Kearney met her future husband, Terry, in the kitchen, where he worked alongside her mother making pizzas, bread, and the restaurant’s beloved “spag and balls.”) Her mother, Annamaria, now 92, recalls the eager Duke students with a wry chuckle: “At first, they used to annoy me to death: ‘When are you going to make me a pizza?’ I decided to make the pizza just to keep them quiet.” 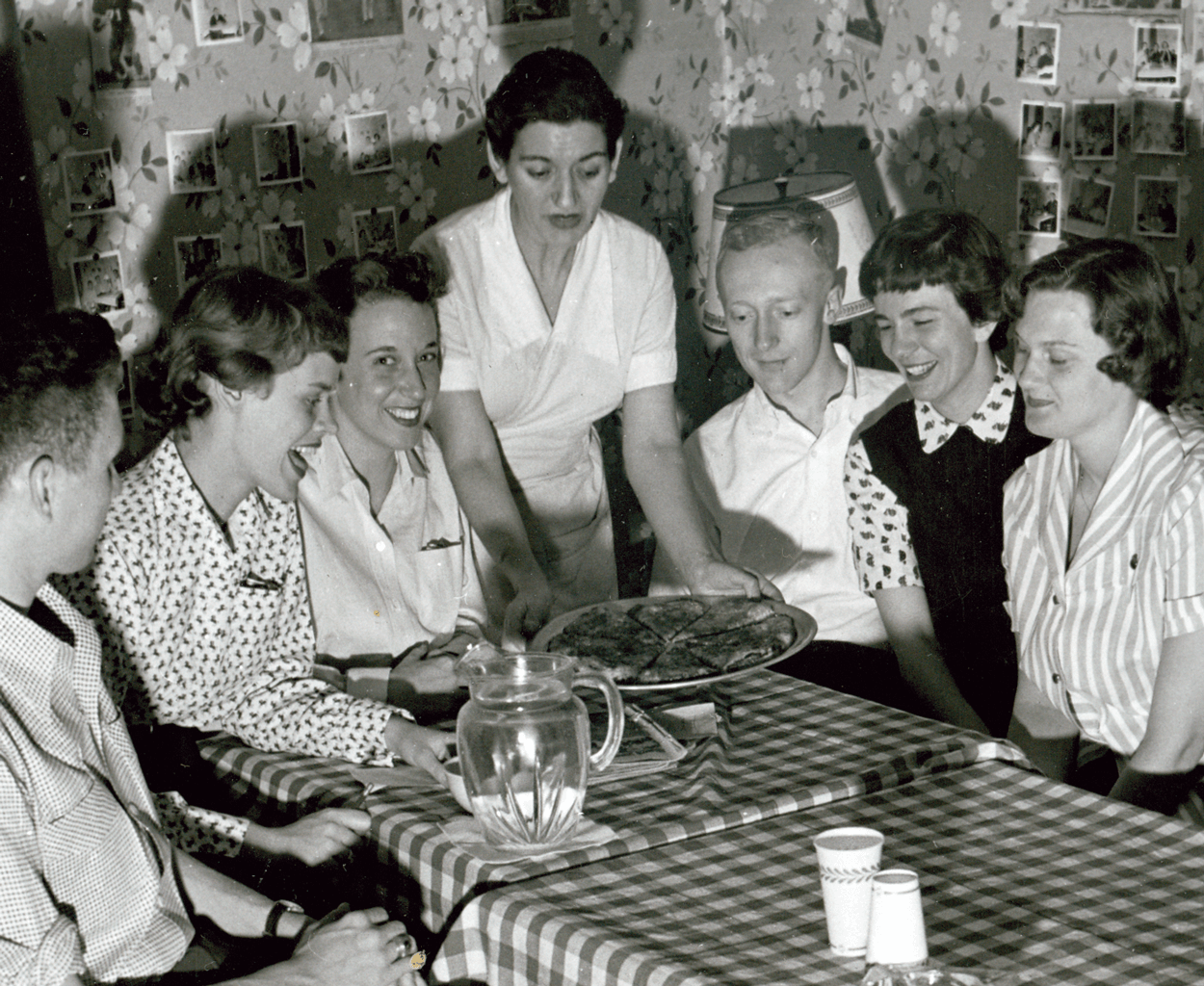 When Annamaria Malanga and her husband, Bat, opened their pizza parlor in 1956, Duke students flocked to her Italian dishes — and Bat’s singing. photograph by Duke University Archives

Those pizzas, made in her home kitchen and served in her living room to hungry Duke football players, turned into a business in 1956, when the couple opened Annamaria’s Pizza House on Albemarle Street. The gregarious Bat ran the front of the house, often singing bawdy songs while strumming a guitar. “He was the entertainer,” Annamaria says. “He kept the [customers’] minds off the pizza wait.”

In Charlotte, the first place to serve pizza was Open Kitchen. Christina Skiouris, daughter of the original owners, spent her childhood folding pizza boxes and rolling silverware. She recalls curious customers following the distinctive aroma inside and asking, “What’s that smell?” The answer: garlic. Lots of garlic.

Skiouris, who still owns the place with one of her brothers, says that they talk to customers every day who have been coming since Open Kitchen first opened its doors in 1952: customers like Wally Overton and his wife, Carol Ann, who went on one of their first dates at Open Kitchen in 1965. “It worked,” Wally jokes. The couple returns about once a month, driving 35 miles from their home in Waxhaw. “It’s a long trip,” he admits, “but it’s a pilgrimage we enjoy.”

The gregarious Bat ran the front of the house, often singing bawdy songs.

In Raleigh, North Carolina State University students had their pick of two pizza places located right next to each other on Hillsborough Street: Brothers Pizza Palace and Two Guys Pizza. Both were magnets for student and faculty members until the 2000s, when both closed. “My mother-in-law was notorious for packing people in,” Tim Harrison says of owner Bena Russos, who, along with her husband, James, ran Brothers for decades beginning in 1967. The Russoses bought the restaurant from a pair of Greek brothers — hence the name. “She’d see a guy eating alone and would seat a cute girl with him,” Harrison remembers. 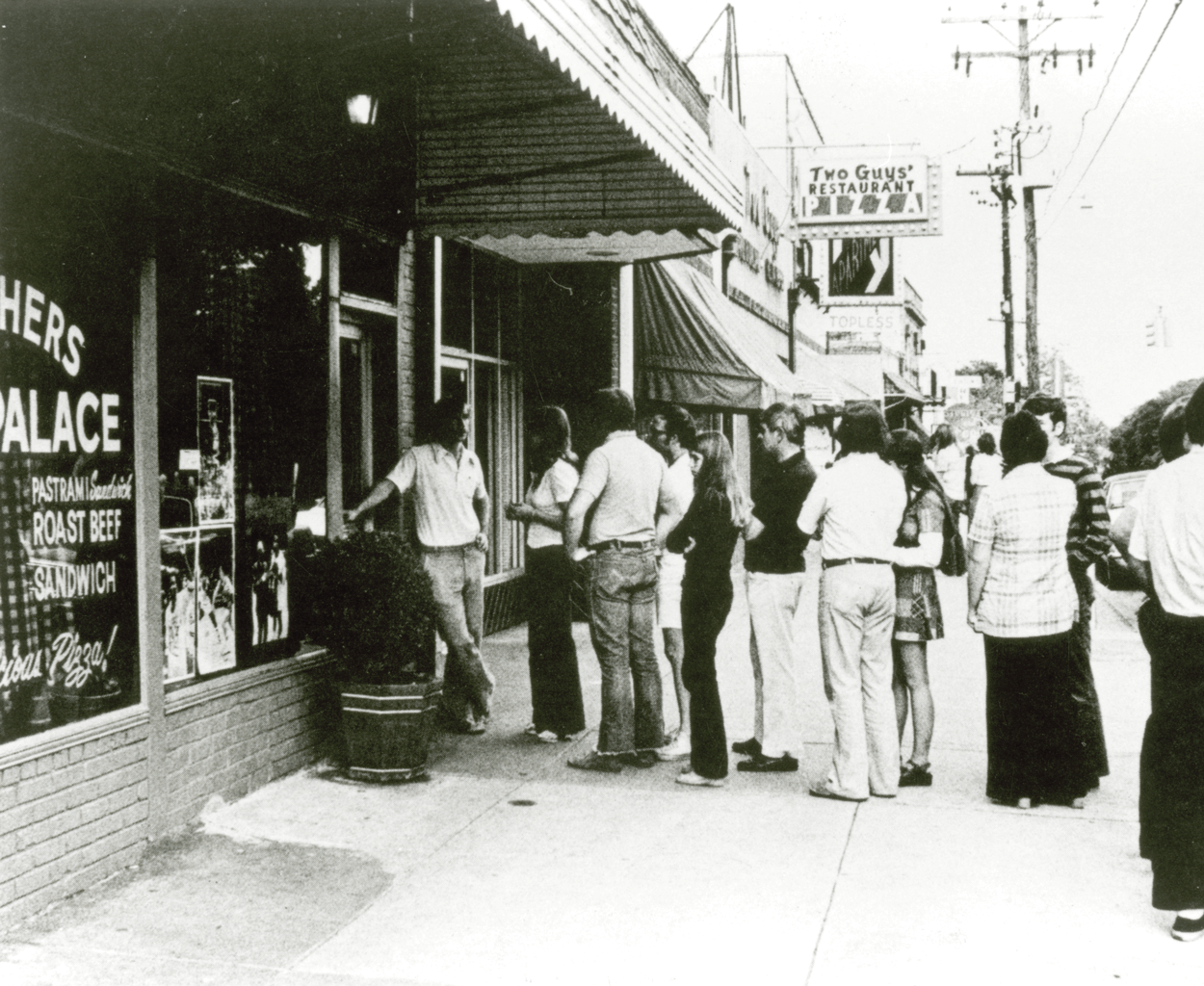 In 1975, the line outside Brothers Pizza Palace on Hillsborough Street in Raleigh stretched to the curb. For decades, the restaurant and its neighbor, Two Guys Pizza, were hot spots for NC State students and faculty members. photograph by photograph 0001039, Hillsborough Street collection (UA023.005.125), the Special Collections Research Center, North Carolina State University Libraries

Retired NC State professor Gerald Elkan remembers that both Brothers and Two Guys were in the regular lunch rotation for a group of professors who ate together every weekday for about four decades. At Two Guys, they named a sandwich after the microbiology professor: The Elkan was loaded with salami, cheese, lettuce, onions, tomatoes, and Italian dressing. For years, Elkan took Brothers pizzas with him to Vermont when he visited friends. James Russos would come to work early in the morning to prepare the pizzas for Elkan’s 7 a.m. flight. Elkan would always ask the flight attendant for help storing the insulated pizza case, since it could be damaged in the overhead bin. And, invariably, the attendant would ask, “Are there no pizza restaurants in Vermont?”

In Greensboro, UNCG students and locals can still find one of their favorite pizza restaurants going strong after almost 50 years: Bill’s Pizza Pub. Donna Rogers’s father, Bill, moved his family to Greensboro from Indiana to open a Sir Pizza location in 1969. The business struggled as a franchise, so her father got out of the contract, changed the restaurant’s name, and turned it around. Rogers’s first job at the restaurant was manning the telephone, which was no small task: Every booth at Bill’s had a telephone. Diners would call in their orders and get a call back when their pizza was ready. Bill’s also was well-known for its pizza delivery vehicles: first, a 1960s canary yellow Cadillac hearse with a green top, and later, a retired Cushman police truckster. “My dad liked his toys,” Rogers says.

The pizza, a deep-dish pie cut into squares, hooked Cathia Pope, a 1982 UNCG graduate from Norlina. “It was plenty — very filling,” she says. “That’s what you want when you’re in college.” When Pope visits her family in Greensboro, she insists that they make time for a meal at Bill’s: “It is my favorite place in the whole world.”

While college towns gave pizza restaurants a ready-made customer base, locally owned joints opened in small towns all over the state, too, enlarging a market that would eventually be flooded with national franchises. Misty Herget, 44, of Raleigh has fond memories of the Pizza Station in Reidsville, which was her first exposure to restaurant pizza. She remembers the buffet of thin, crispy slices dripping with melted cheese. “They had a salad bar with homemade ranch dressing, which was a big deal in Rockingham County,” Herget says with a laugh. “You’d choose your restaurant based on the best ranch dressing.”

Herget remembers her parents taking her to the Pizza Station as a special treat after school, and the countless hours she spent there with classmates after football games. When the restaurant closed in 2010, it hit Reidsville residents like the loss of a friend, which is how it feels to lose a storied old hangout. “Not only were they pizza places, they were gathering places,” Herget says. “They brought people together.”