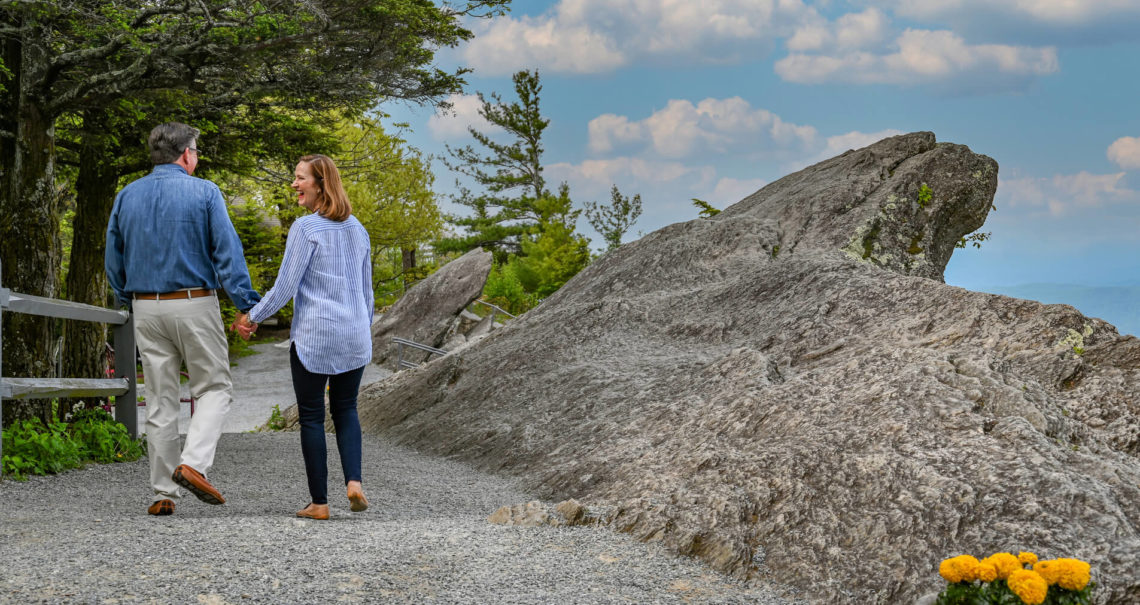 In 1924, Mayview Manor, a new, opulent hotel perched on a ridge overlooking Johns River Gorge in Blowing Rock, opened a shooting range — and hired Annie Oakley to run it. The American sharpshooter spent every summer in Blowing Rock teaching guests like Eleanor Roosevelt and Richard Nixon how to shoot; she also showed off her own skills to guests. During one demonstration, legend says that Oakley hit 98 of 100 clay pigeons.

“She was the star attraction of the gun club,” says Tom O’Brien, president of the Blowing Rock Historical Society.

Mayview Manor was demolished in 1978, but stories of the “Queen of Blowing Rock Hotels,” continue to be part of the historic fabric of this picture-perfect mountain town. In fact, Oakley was just one of the famous residents and visitors who spent time in Blowing Rock: Calvin Coolidge, Mae West, Bob Hope, and artist Bob Timberlake also retreated to Blowing Rock to take advantage of the cool mountain breezes and beautiful scenery — and their stories are woven into the fabric of the town.

“Today, there’s a lot more interest in Blowing Rock’s history,” O’Brien says. “The number one thing we can do for the community is bring that history to life.”

Check out these spots around town to experience for yourself where past meets present in Blowing Rock.

Elevate Your Getaway in Blowing Rock 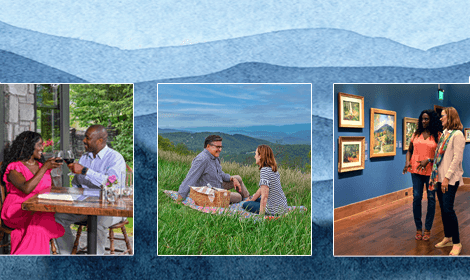 1888 Museum: As its name suggests, this cottage was built in 1888 as part of the Watauga Hotel. The Blowing Rock Historical Society transformed the two-room lodgings into a diminutive museum; one room is set up as it would have been when it was a hotel and the other highlights the history of local tourism.

“We use the 1888 Museum to tell one of Blowing Rock’s most important stories: the history of welcoming visitors,” O’Brien says. “Museum visitors can learn about why tourists came, how they got here, and what they did [when they arrived].” 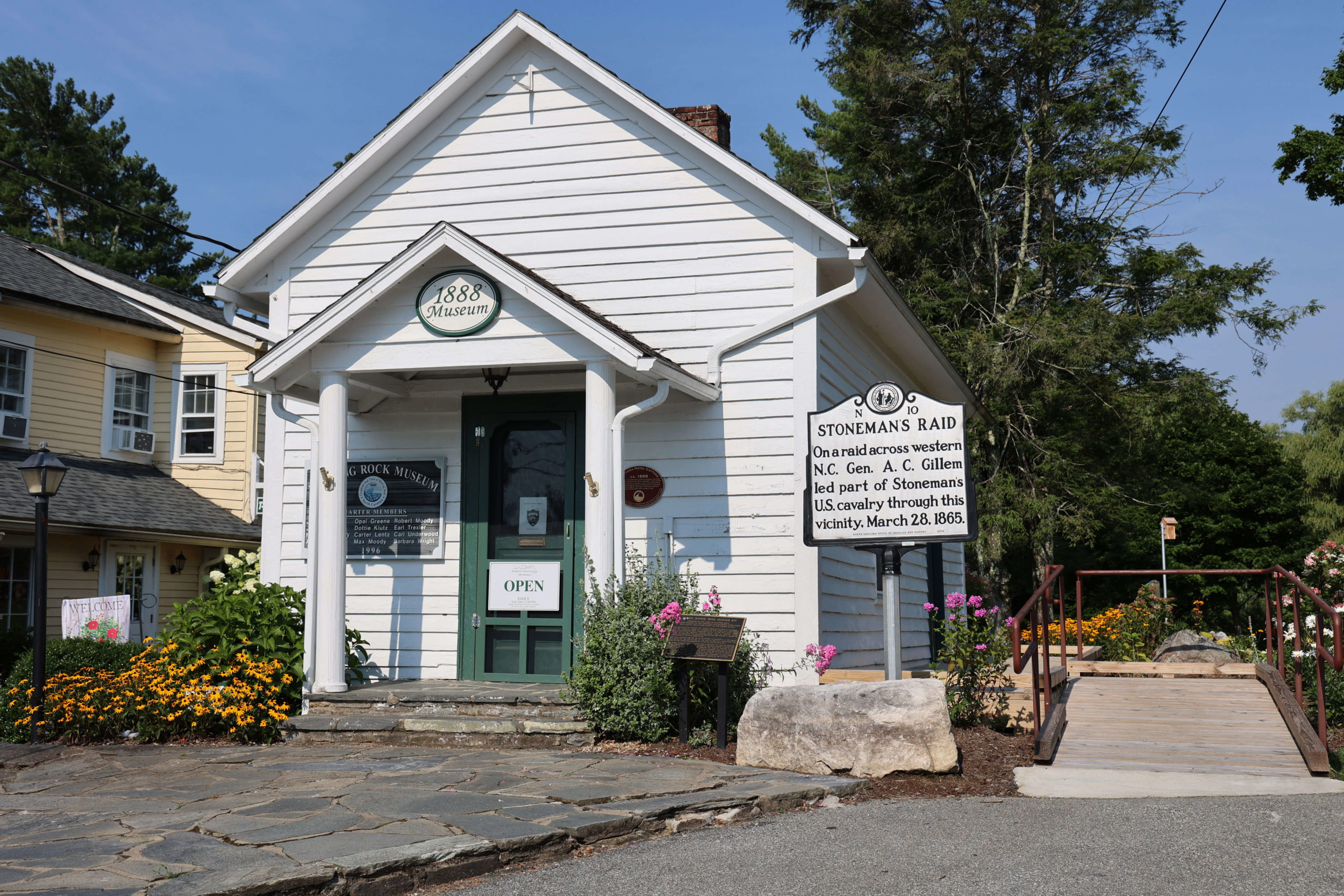 Chetola Resort: This mountain resort has a long and storied history that includes stints as a waystation for freight, a boarding house, an ice house, and a private residence. J. Luther Snyder, a salesman with the nickname “The Coca-Cola King of the Carolinas” purchased Chetola in 1926. The price: A mere $36,000 for 36 acres.

The resort has changed through the decades, and now includes 150 guestrooms, restaurants, a spa, and a recreation center spread across 78 acres, but the spirit of the mountain getaway remains the same today.

“Spending time with friends and family in a beautiful place with endless opportunities to create memories allows us to understand what made J. Luther Snyder and the other previous owners so passionate about this place,” says P.J. Wirchansky, Chetola’s director of marketing. “There is simply something refreshing about taking a moment to stop and enjoy these beautiful mountains.”

Walk in the woods, cast a fly line on the lake, sign up for an experience on the sporting clay course (and channel your inner Annie Oakley), enjoy a picnic lunch, and stroll into downtown Blowing Rock to experience the shops and restaurants. 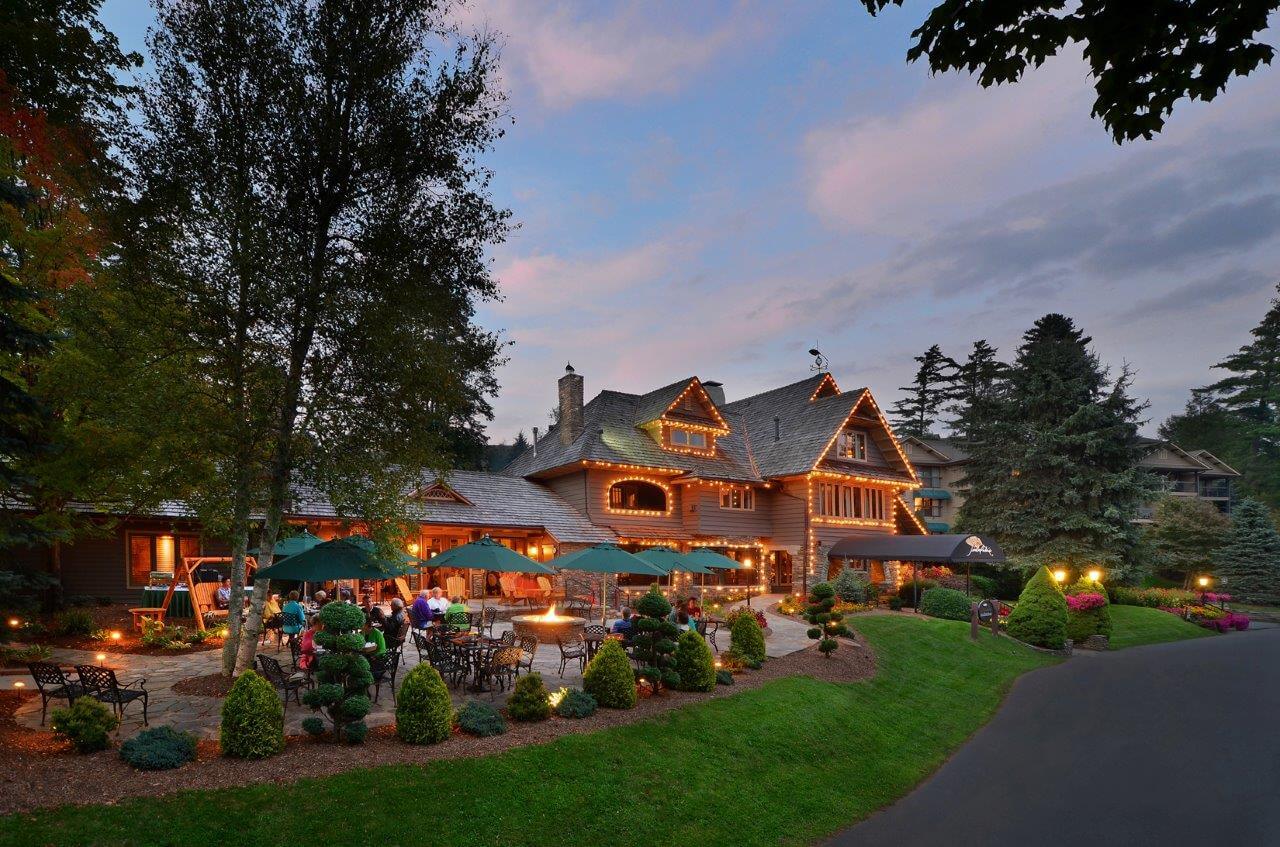 Chetola Resort has a long and storied history, but the spirit of the mountain getaway remains the same today. photograph by Todd Bush Photography

Edgewood Cottage: In the summers, American artist Elliott Dangerfield traveled from Philadelphia, where he taught art classes to women at the Philadelphia School of Design, to Blowing Rock. He built Edgewood Cottage in 1891 as his summer escape.

“A lot of women followed [Dangerfield] to Blowing Rock for the summer to continue their lessons,” O’Brien explains. “The locals nicknamed them ‘The Painting Ladies,’ and we have photographs of Elliott Dangerfield and The Painting Ladies on the front deck of Edgewood Cottage.”

The Blowing Rock Historical Society reimagined the cottage as a meeting and event space, and these days, a summertime Artists in Residence program showcases rotating works from emerging artists as a nod to the artist’s legacy. 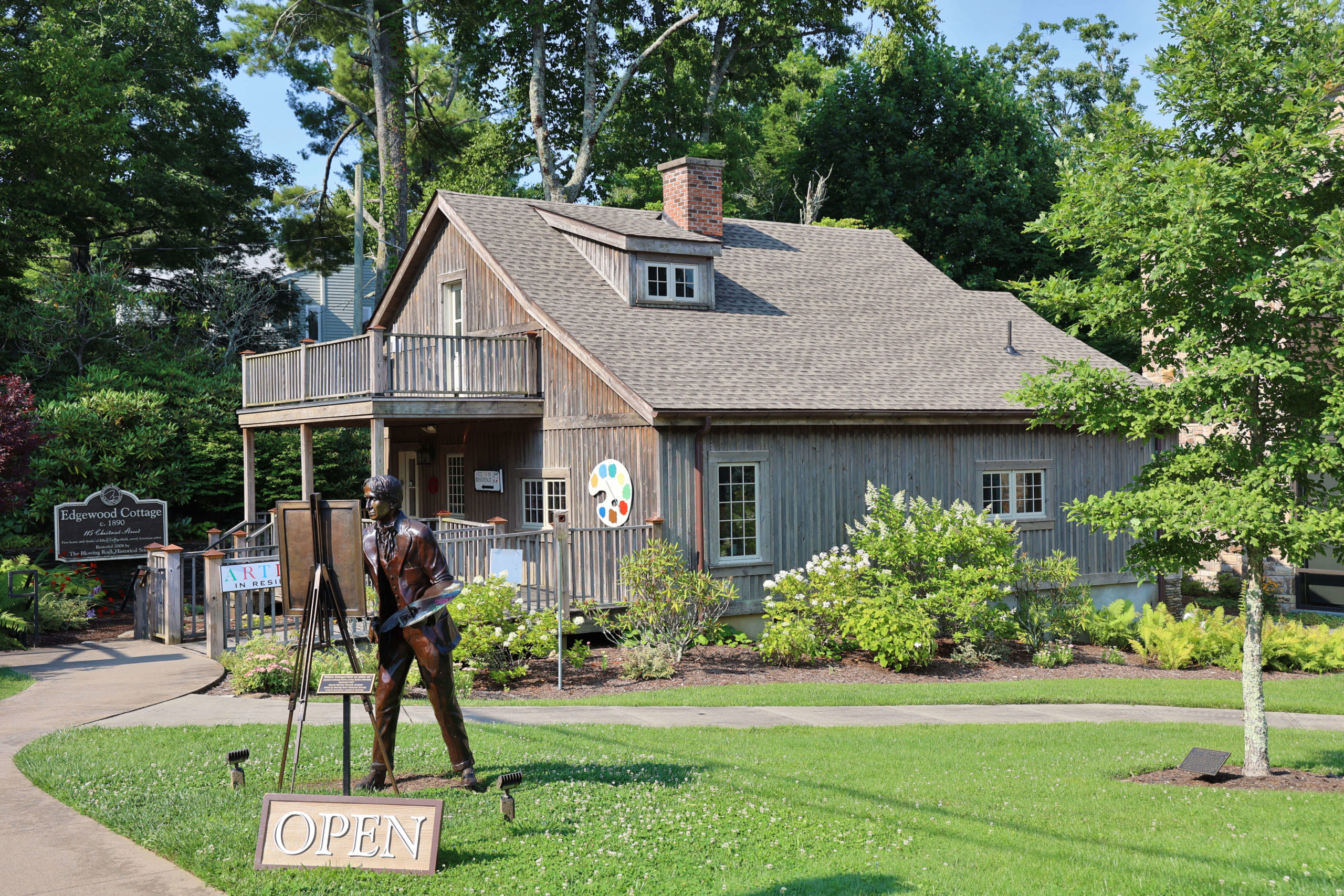 The Blowing Rock Historical Society reimagined the Edgewood Cottage as a meeting and event space, which hosts a summertime Artists in Residence program. photograph by Blowing Rock, NC

Bistro Roca and Antlers Bar: Although the menu has changed, Antlers Bar at Bistro Roca has been the place to order cocktails since 1932, earning it the distinction of the oldest continuously serving bar in North Carolina.

Take a seat, order a Sparkle Pony, Mrs. Parker’s Sidecar, or Bankers Hand and imagine the stories shared over drinks for the past 90 years. Then order a pizza at Bistro Roca: The wood-fired pizza oven was made from bricks salvaged from the original Antlers Bar location. 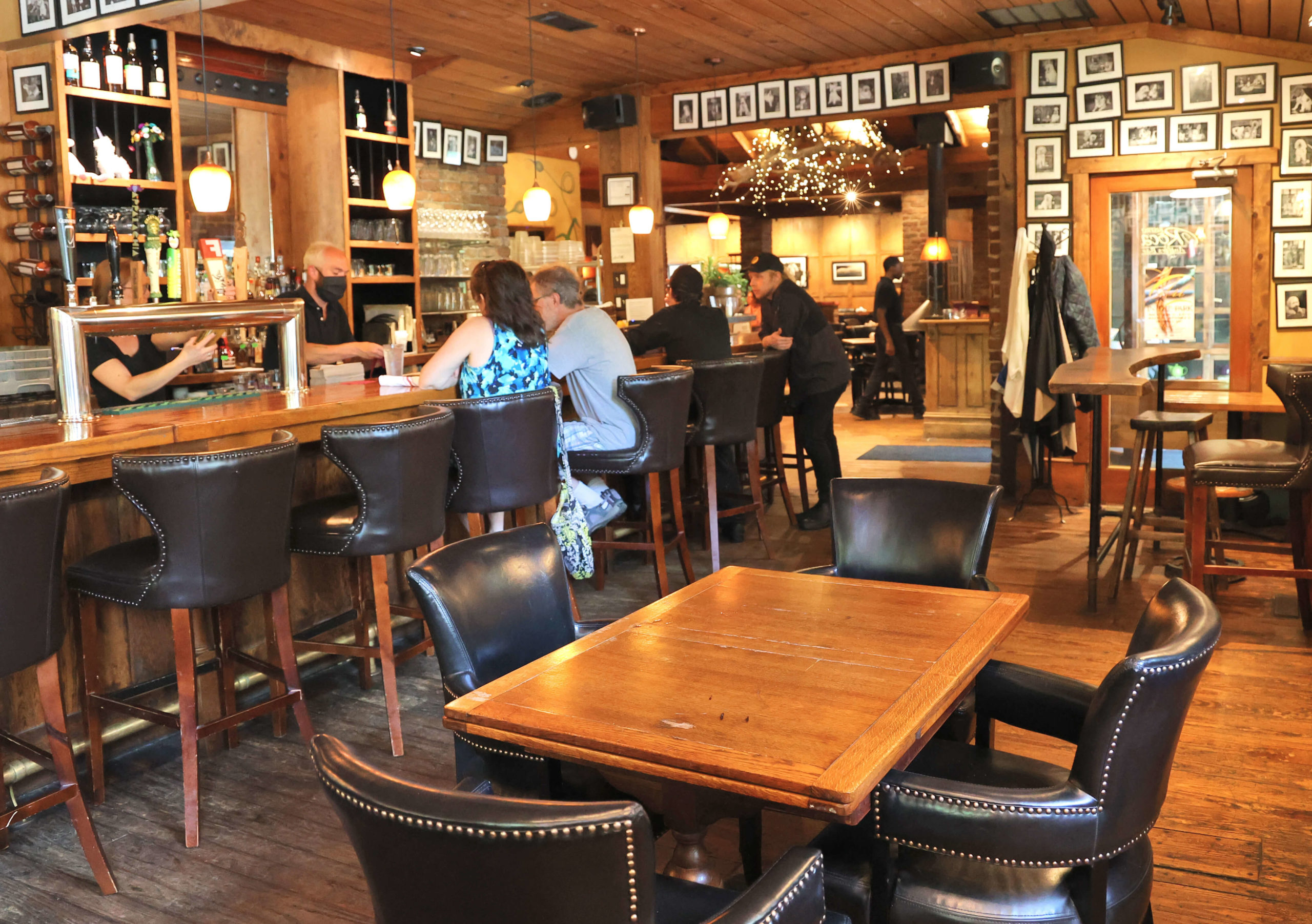 Antlers Bar at Bistro Roca has been the place to order cocktails since 1932. photograph by Blowing Rock, NC

Checking into a hotel where presidents, first ladies, and business magnates have vacationed — plus the hotel’s original Queen Anne architecture and light fixtures — are big draws, according to general manager Lorry Mulhern.

“The history is worth the experience,” she says.

Original photographs, artifacts, and news clippings dating back 130 years are on display in the history room, which is open to the public. The 88-room inn is listed on the National Register of Historic Places and considered one of the last of the grand manor hotels in western North Carolina. Even the service is old-fashioned — in the best way. “Our hospitality harkens back to another era,” Mulhern says. 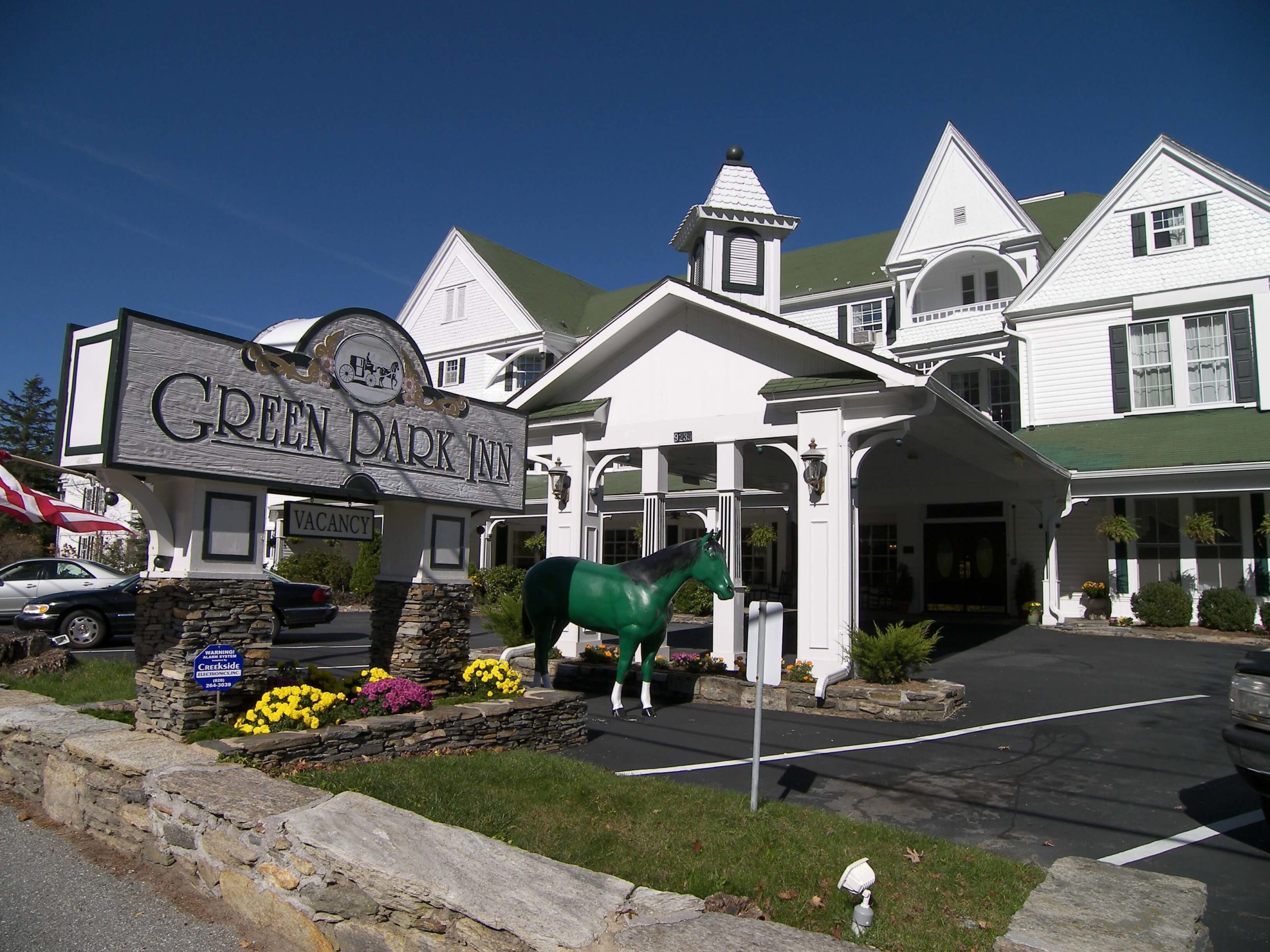 The Green Park Inn has been welcoming guests since 1891, and boasts an impressive former guest list. photograph by Blowing Rock, NC

Tweetsie Railroad: In 1866, the East Tennessee & Western North Carolina Railroad ran from Johnson City, Tennessee, to Cranberry, North Carolina, chugging along 50 miles of tracks through the mountains. Locomotive No. 12 soon earned the nickname “Tweetsie” because of the “tweet, tweet” of the train whistle.

The railroad ceased operations in 1950, but Tweetsie escaped the scrap heap. Eventually, additional steam locomotives were purchased and the excursion railroad expanded into a theme park. Today, riding the steam locomotives is a trip back in time.

Tweetsie is so special that it was even added to the National Register of Historic Places. The next time you take a ride, listen closely: Each Tweetsie Railroad engineer develops their own signature whistle, so it’s possible to tell who’s operating the engine by listening to their distinctive sound. 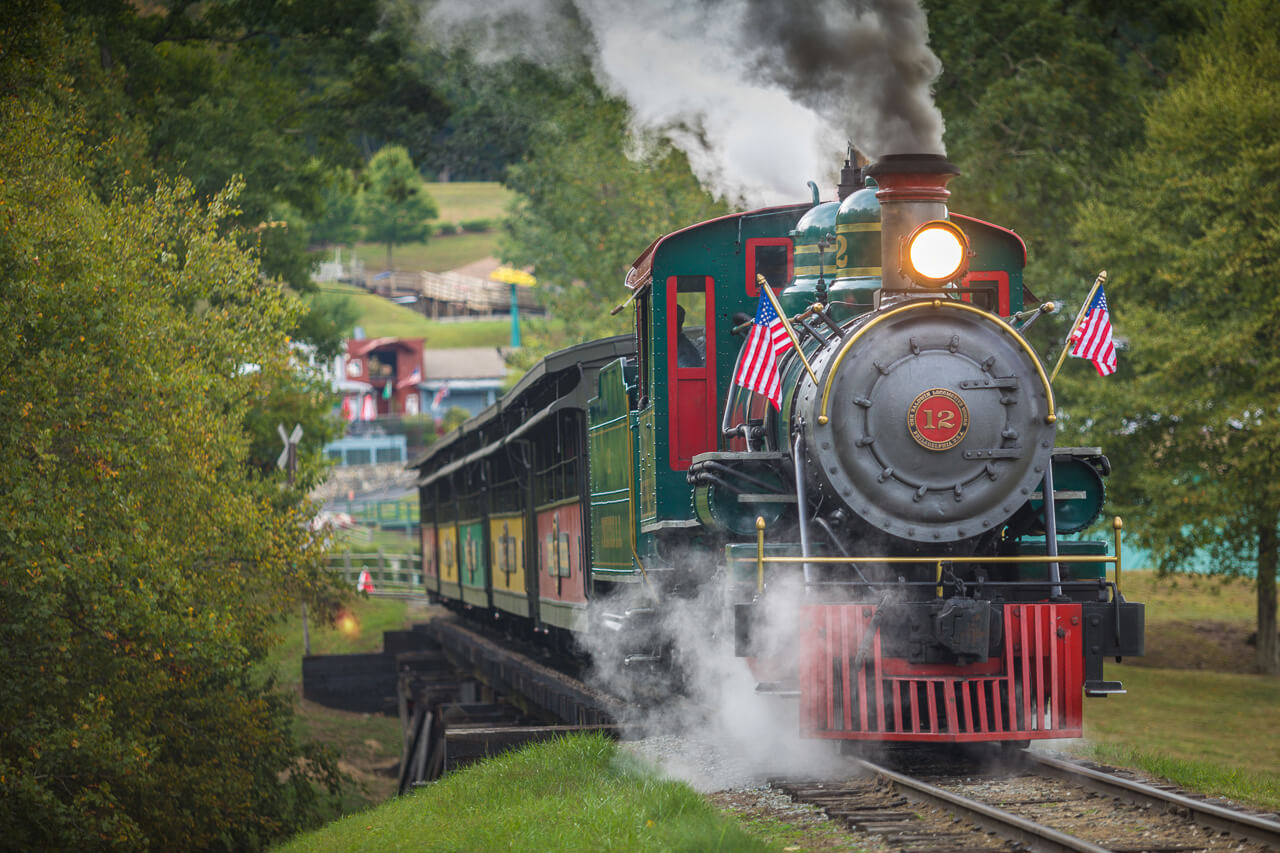 Today, the National Park Service hosts weekly tours of the Gilded Age mansion, and several rooms on the main floor are open to the public as part of the Southern Highland Craft Guild gallery, in which juried artists show and sell work ranging from textiles and pottery to watercolor and woodwork.

And the beautiful property, part of Moses H. Cone Memorial Park, is as much of a draw as the mansion. A total of 25 miles of trails wind through the 3,500-acre estate. One of the most popular is the Figure 8 Trail, which loops around the manor — the Cones were said to walk the trail together every morning. 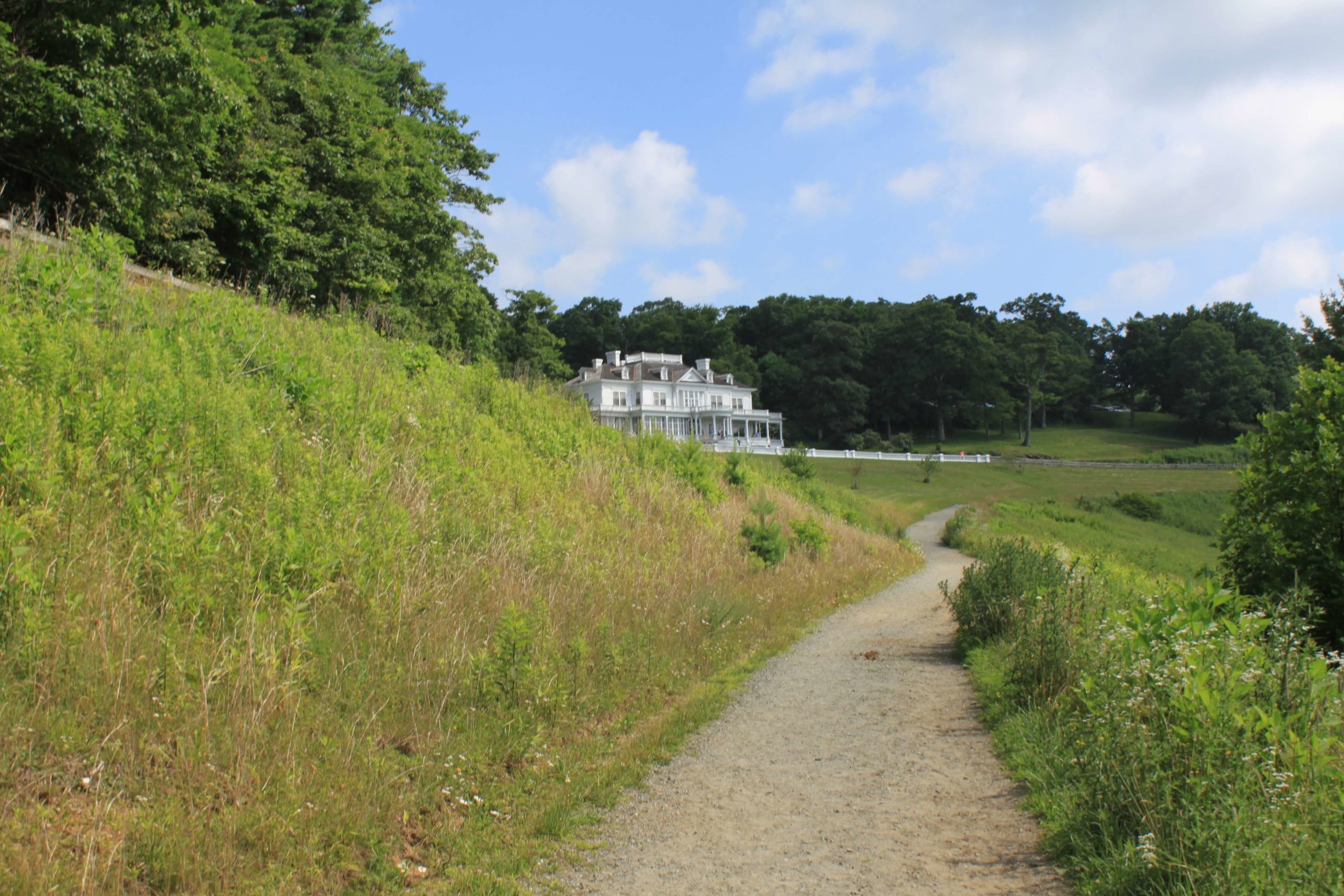 A total of 25 miles of trails wind through the 3,500-acre Moses H. Cone estate. photograph by Blowing Rock, NC

The 469-mile ribbon of road, including the famous Linn Cove Viaduct (believed to be one of the most complicated concrete bridges ever built), runs through Blowing Rock — which means it couldn’t be easier to hop on for a scenic afternoon drive. 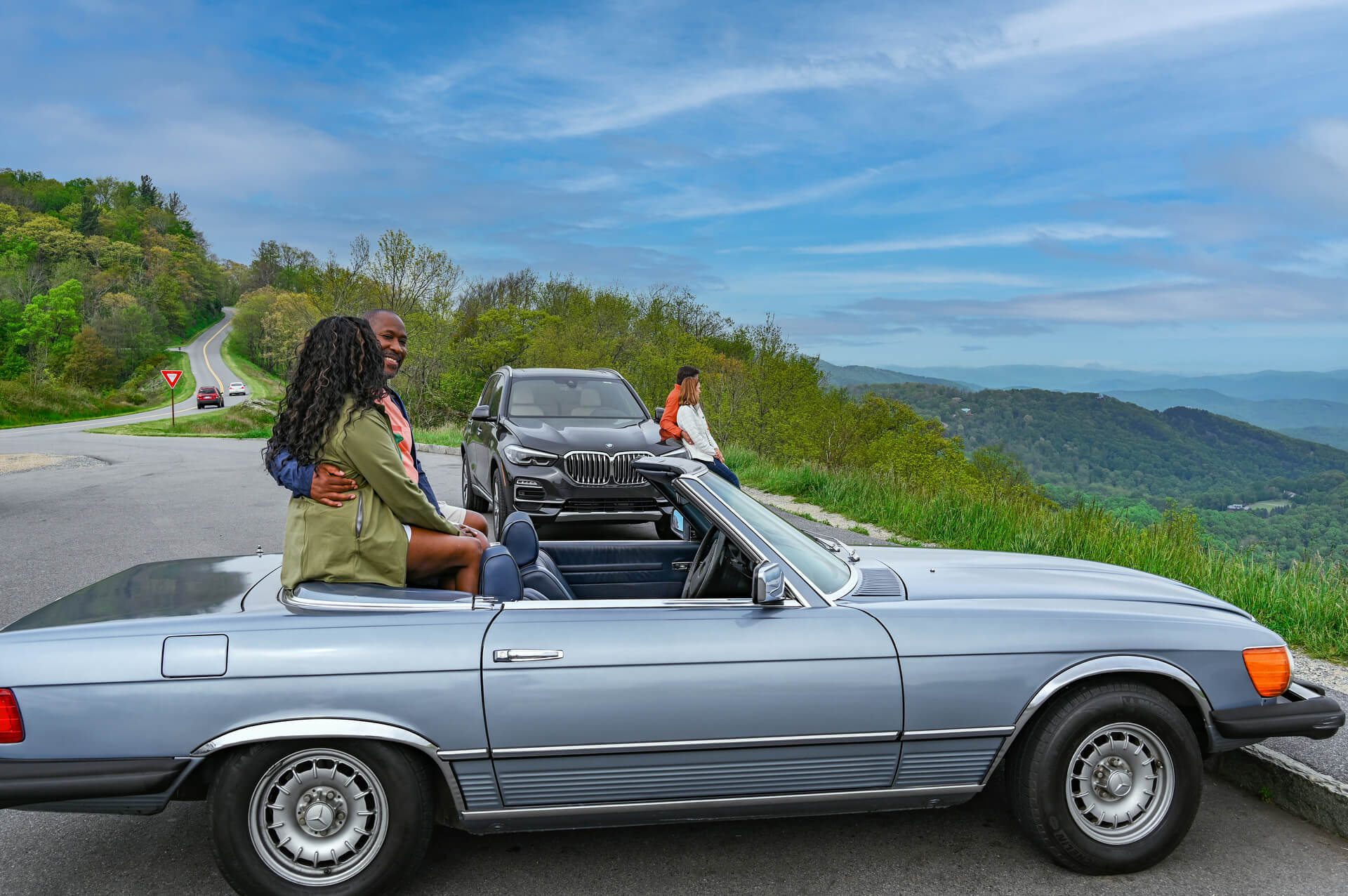 Hop on the Blue Ridge Parkway for a scenic afternoon drive. photograph by Todd Bush Photography

The Blowing Rock: This cliff, which towers 4,000 feet above sea level, offers stunning views of the Johns River Gorge and the Blue Ridge Mountains. It’s also the setting of a famous Native American legend.

It’s said that a Chickasaw maiden and a Cherokee brave fell in love. The brave felt he should go to his tribe in the plains but the maiden begged him not to leave; he felt so conflicted that he leapt from the rock into the wilderness below. The maiden returned to the rock to pray to the Great Spirit and, one evening, the wind blew the brave back onto the rock, earning it the moniker The Blowing Rock.

Take in the views from the rock and walk the nature trails to explore the gardens, waterfall, and observation tower, which offers spectacular views of the mountains — a similar view to the one that guests once looked out upon from Mayview Manor. 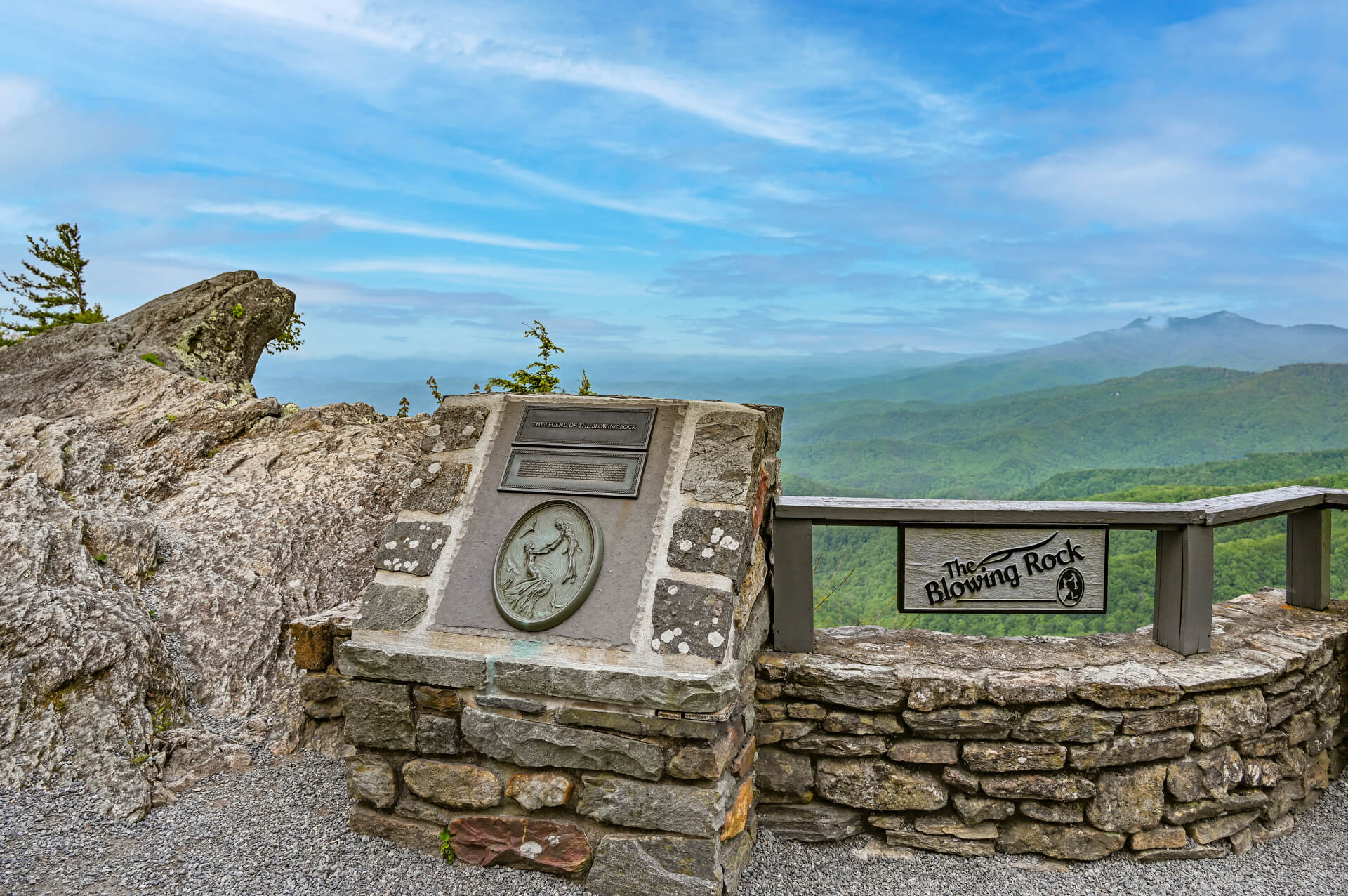