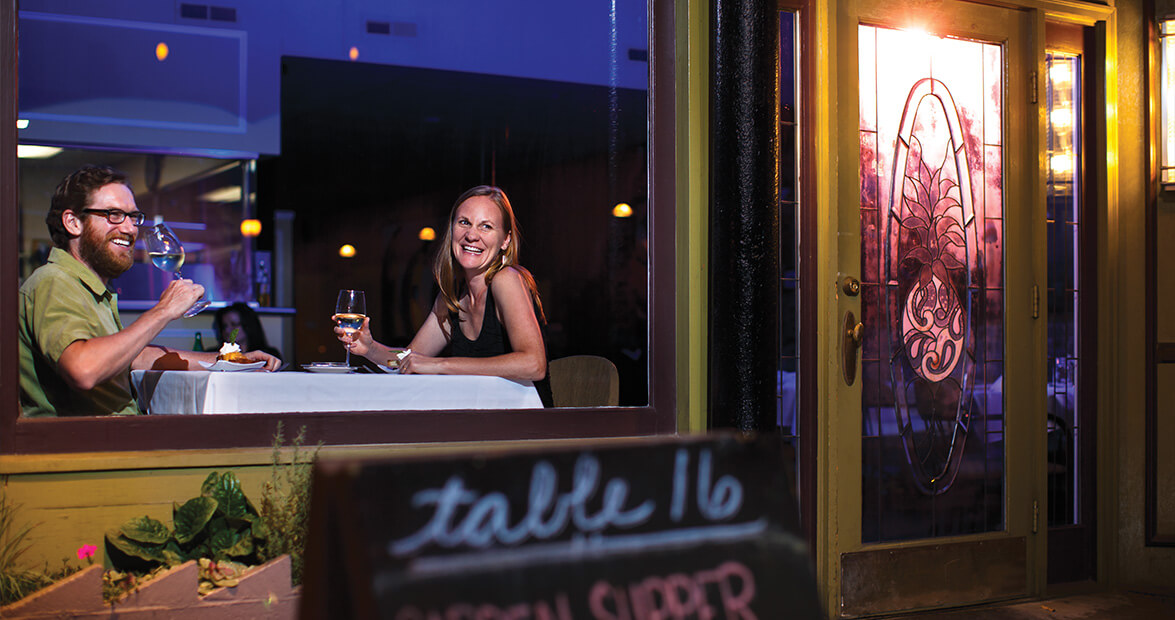 I find the table in the window, which is really a tiny room with a view. I’ve never gotten lucky enough to sit there. But other people have, and they swear that it helps put their lives into perspective.

Still, I wonder. The table is simply perched on a platform, with room enough for two. People propose at that table, remember wedding anniversaries there, and watch the world roll by as they look out the window. 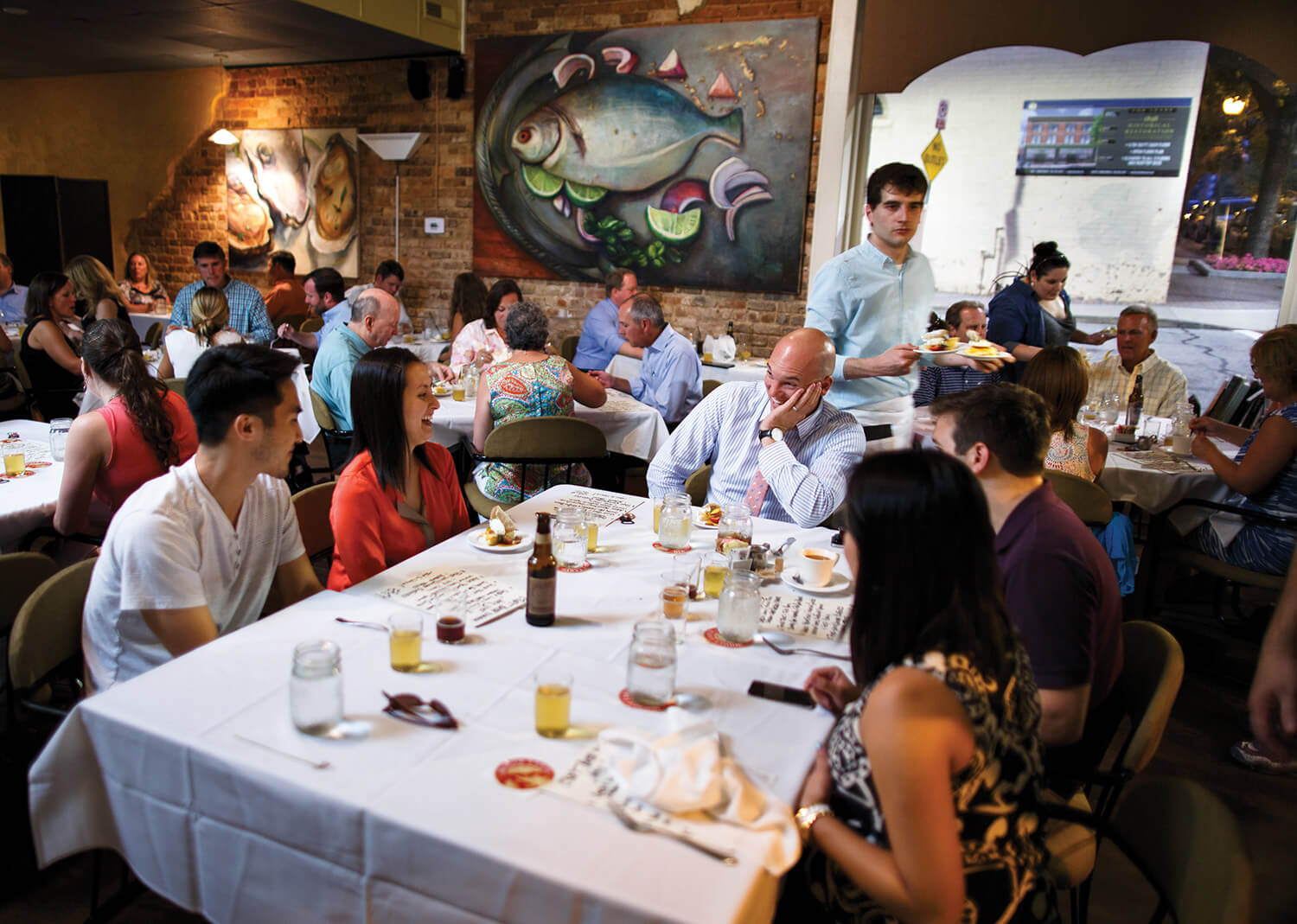 Big art, beer tasting, and a full house at Table 16 on a Thursday night. photograph by Jerry Wolford

Diners come for the food. But they also come for the experience of looking onto South Elm Street in downtown Greensboro and feeling like they’re on the inside of a big aquarium.

People pass by on the sidewalk, oblivious. They kiss, hug, holler, wave, swagger, bike, ride a skateboard while holding a ladder, stoop to pet a dog, or stop to catch up with a long-lost friend.

Charles and Shelley Kappauf have come to celebrate their 25th wedding anniversary, and Charles knew where they would sit. “If you go to Table 16,’’ his boss told him earlier that day, “they’ll put you at table 16.’’

The Kappaufs got lucky — and love their fishbowl perch.

“Sitting here reminds me why I love Greensboro,’’ Shelley says. “I look out this window, see these old buildings, and see how South Elm Street is turning around everywhere you look. People talk about the renewal of this side of town, but I look at it as a resurrection.”

Resurrection does seem like the right word. I remember when this two-block section of downtown Greensboro was as exciting as a cemetery.

Now, as I talk to the Kappaufs, I look out the window and think downtown Greensboro looks a lot like Brooklyn. One local historian calls these two blocks of South Elm “Greensboro’s shabby chic.” It’s a place of century-old architecture, where commerce and blue-collar businesses thrived way before World War II.

People young and old venture across the railroad tracks of South Elm to eat, people watch, and shop for antiques and sneakers, art and furniture, clothes and tomato plants out front at Coe Grocery.

It’s a place of eye candy and activity. There’s everything from theaters to an art gallery to a collection of antiques shops to a lock and key shop locals know simply as Dixie.

A former hardware store houses a Mellow Mushroom restaurant, where pizza and beer are served in one big room under a constellation of Gothic chandeliers. Catty-corner across the street, in a former hotel that was once a grocery store, is Table 16.

A 1936 tornado took off the building’s third floor, and it’s been two floors ever since. Home to a succession of restaurants since the ’80s, Table 16 is its fourth incarnation.

I first went there more than 20 years ago, when the place was known as The Undercurrent.

I sat at table 7 then, a two-top near the wall. I went on a date with a woman I met in Asheboro. We talked, we laughed, and she peeked at me from behind her wine glass, giving me a mischievous grin that I’ll keep forever in my memory.

That woman became my wife.

The building is indeed a memory-maker.

Sunlight slips through the wide windows and the stained-glass pineapple on the front door, and freckles the dining room’s Arizona-yellow walls with a warm, late-afternoon glow.

From table 7, I can see the kitchen. So can other diners. They want to watch Graham Heaton, Table 16’s chef, do his thing. And he does, his face inches from a plate, creating what often looks like a dish from a food magazine.

Heaton was a kid of the Outer Banks, a Tom Sawyer of a child who considered the Currituck Sound to be his playground, and an 18-foot boat his bike.

He graduated from Johnson & Wales University, the acclaimed culinary school, and worked in more than 15 restaurants before buying Table 16 in 2008. He now works in a narrow kitchen, 14 paces long, coaching the young cooks around him.

Luke Hoey, the chef de cuisine, and Steve Marks and Chris Miller, the line cooks, are no more than a step or two away from Heaton’s side. Pots clatter, an oven hood hums. The kitchen is a symphony of sizzle.

Hoey, Marks, and Miller are students of the kitchen. They all have years of experience in a college classroom. But Heaton is their maestro, a master of creating something on the fly.

“Find your voice,” he tells them. “Think about food in a different way. Use everything around you.”

At Table 16, Heaton can sometimes be found in a derby hat, or a backwards ball cap. But he always wears a black apron, with a dishtowel at the small of his back, draped across the string tied around his waist.

Heaton looks younger than his 39 years. He’s tall, runner-thin, with peach fuzz of a beard. If the restaurant gets busy, he’ll bus tables, greet customers, and say hello to the familiar faces. 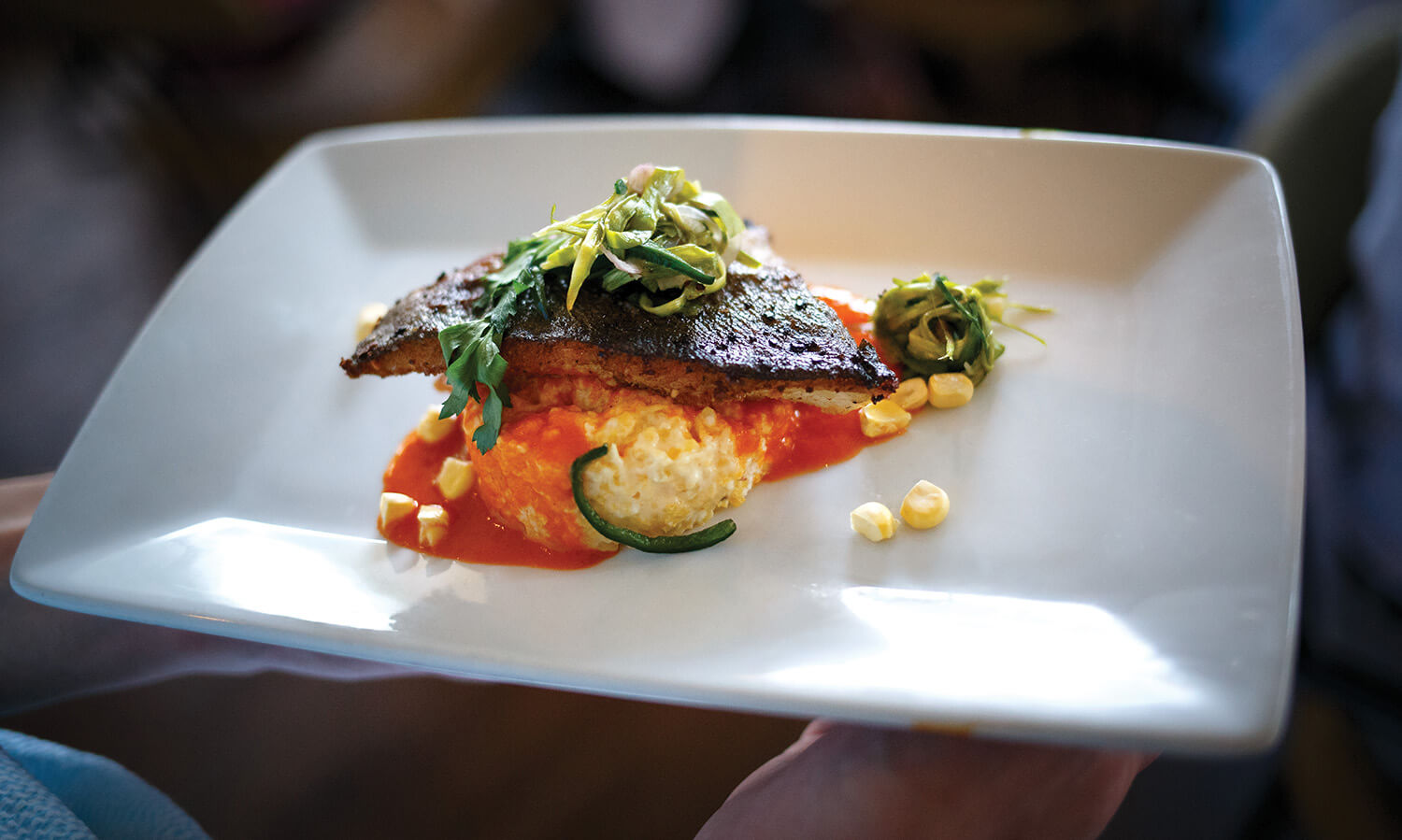 Diners say they like how Heaton and his crew combine flavors. So they come back often for the grilled apricots; the soft-shell crab sandwiches; and the pork belly braised with veal stock, wildflower honey, and mustard seed, cooked low and slow.

“I can come in here and play with food all night,” Heaton says. “I couldn’t ask for anything better.”

Every three months, Heaton creates a new menu to coincide with the changing of the seasons. His offerings are dictated by the availability of local produce, and he creates affordable deals during the middle of the week: “Garden Supper” on Tuesdays, “Dinner for Two” on Wednesdays, and four-course offerings on Thursdays.

Meanwhile, Heaton and his crew offer something different with whatever he gets from his vendors and his local farmers, and together, they create nightly surprises to coax diners over the hump and across the tracks of South Elm Street.

Dan Wood, Table 16’s front-of-the-house manager, says he always gives advice to somebody new: “Get every single ingredient on your fork,” he says  to them, “and taste.” 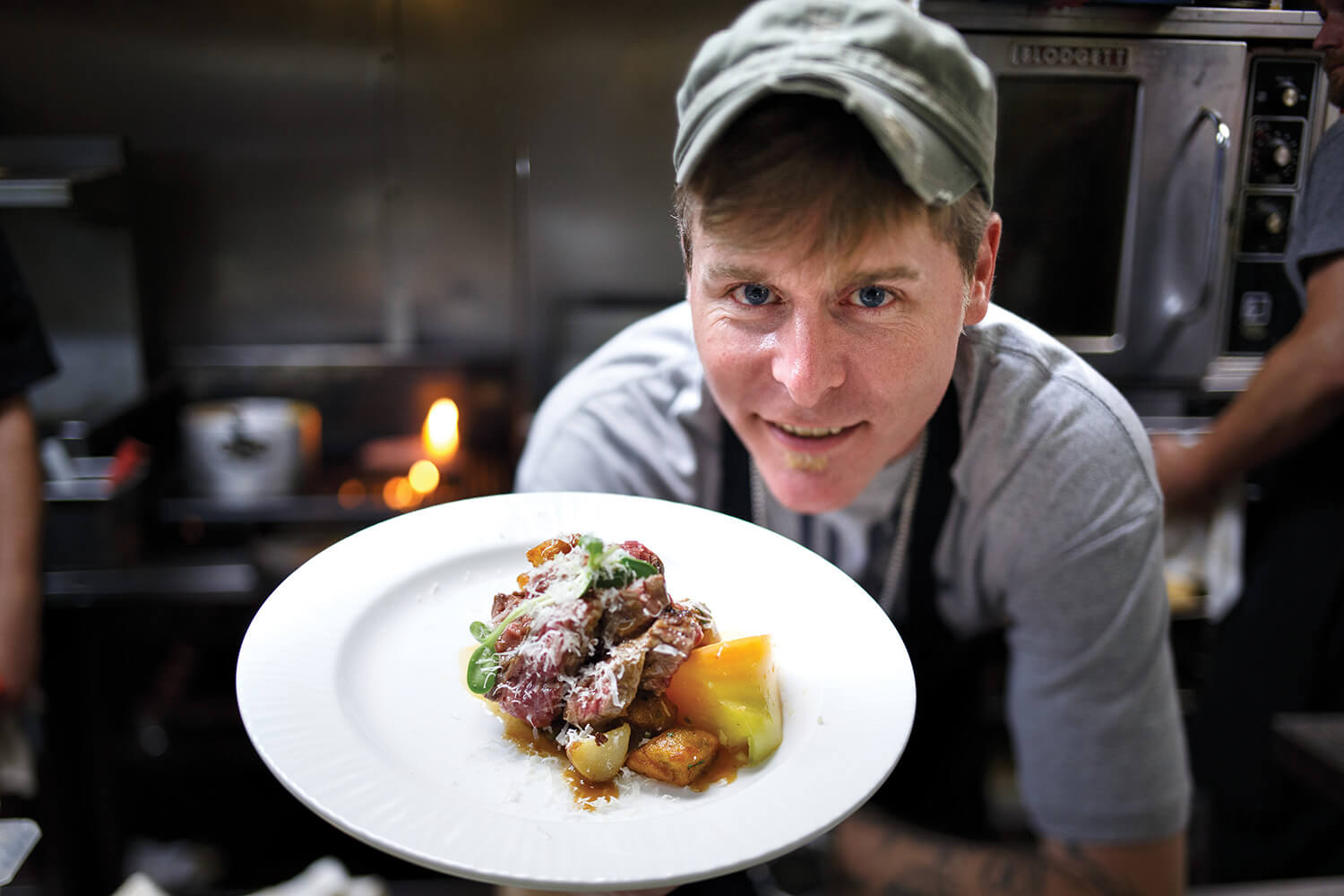 I get the magnetic attraction of good food. But a table in a window, a spot that often has to be reserved for up to a week in advance, or even a year, to make sure someone gets it? Really?

“When you sit right here by the window,” Brie Reeder says, “you can sense that Greensboro has a big heart, a great sense of community, and a small-town feel. We’ve moved around a lot, but we’re from here, and this [table “” not found /]
helps you feel a little more connected.”

Brie and her husband, Michael, have come to celebrate their fifth wedding anniversary. As they tell me about bonding over music, from Nine Inch Nails to The Cranberries, I notice Brie’s right wrist: a tattoo of a Latin phrase.

People do come to celebrate their todays. But they also come to toast their yesterdays and tomorrows. I pick up the restaurant’s journal tucked beside the cash register and read how diners view their perch by the window. But they don’t write about location. They write about feel.

They mention holding hands, laughing often, and the serendipity of walking in and hearing the tune,“Let’s Stay Together” over the sound system. I find the passage written by the Reeders. Michael, Brie’s husband, wrote: “This marriage thing is simple as long as your spouse is also your best friend.”

With a little help from table 7, that happened to me. But table 16 at Table 16 does have some sort of undeniable magic that convinces people to wax poetic and think about the importance of life  beyond their plate. They write it down. And they come back for more of the food before them, the scene beyond them, and the magic around them.