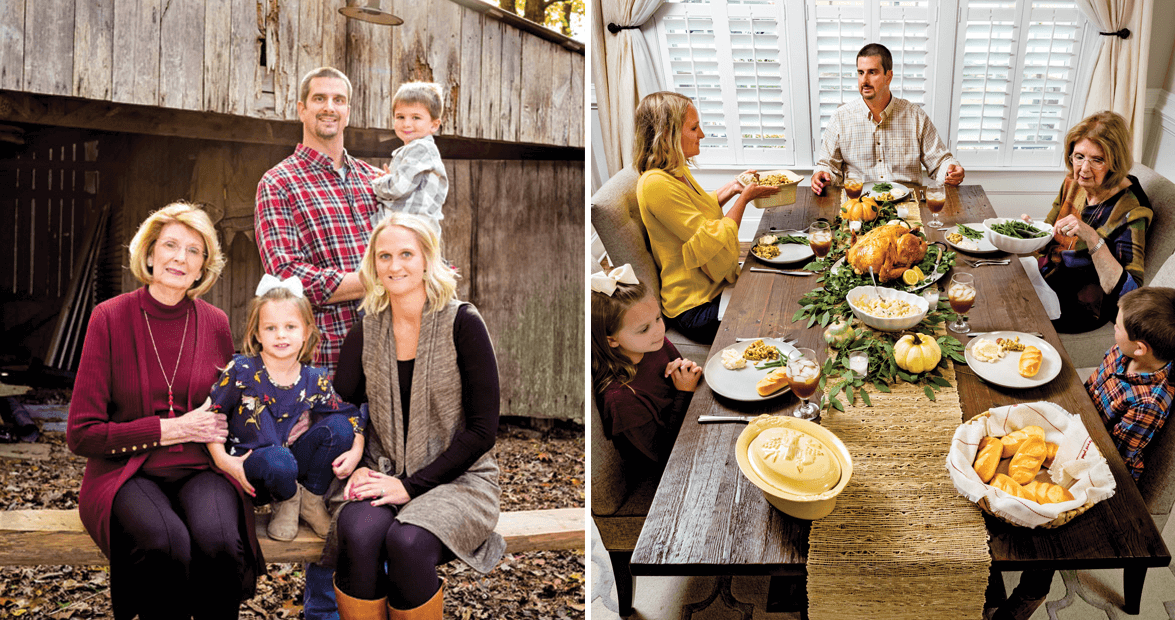 The Heath family gathers in the dining room for the most important meal of the year: Thanksgiving dinner. Zach Heath is at the head of the table, surrounded by his wife, Lauren, and mother, Linda. The Heaths’ 4-year-old son, Hunter, squirms in his seat across from his 6-year-old sister, Hadley. On the table: serving platters filled with fluffy mounds of mashed potatoes and dressing; cornbread and green beans; and a huge, hazel-colored turkey, baked to perfection. Zach takes the hands of his mother and his wife, and the children follow suit until all five are connected. The meal is blessed. The food is served.

But there’s a sixth guest at this particular Thanksgiving meal: the walnut-stained farmhouse table, made from reclaimed wood. But not just any reclaimed wood. This table comes with its own rich and personal history. The wood’s surface — the preserved ridges, knots, and nailheads — tells a story of hard work, dedication, and a life lived with intention. It’s the story of Zach’s grandfather William Glaster Jones, who, nearly 70 years ago, cleared a plot of land in Forsyth County to provide a modest life for his family. The wood from his barn is the same wood that now forms the Heaths’ dining room table.

Zach knew Jones as Pawpaw, and today, living in a suburban Wake Forest neighborhood with children of his own, he’s grateful for the time he spent as a child visiting his grandfather’s land. “I appreciate that open space more now because I can reach out and touch my neighbor,” Zach says, noting the close proximity of suburban houses. Now, no matter what happens to the farm or barn, the table will hold their memories in “a piece that will always be in our family.” 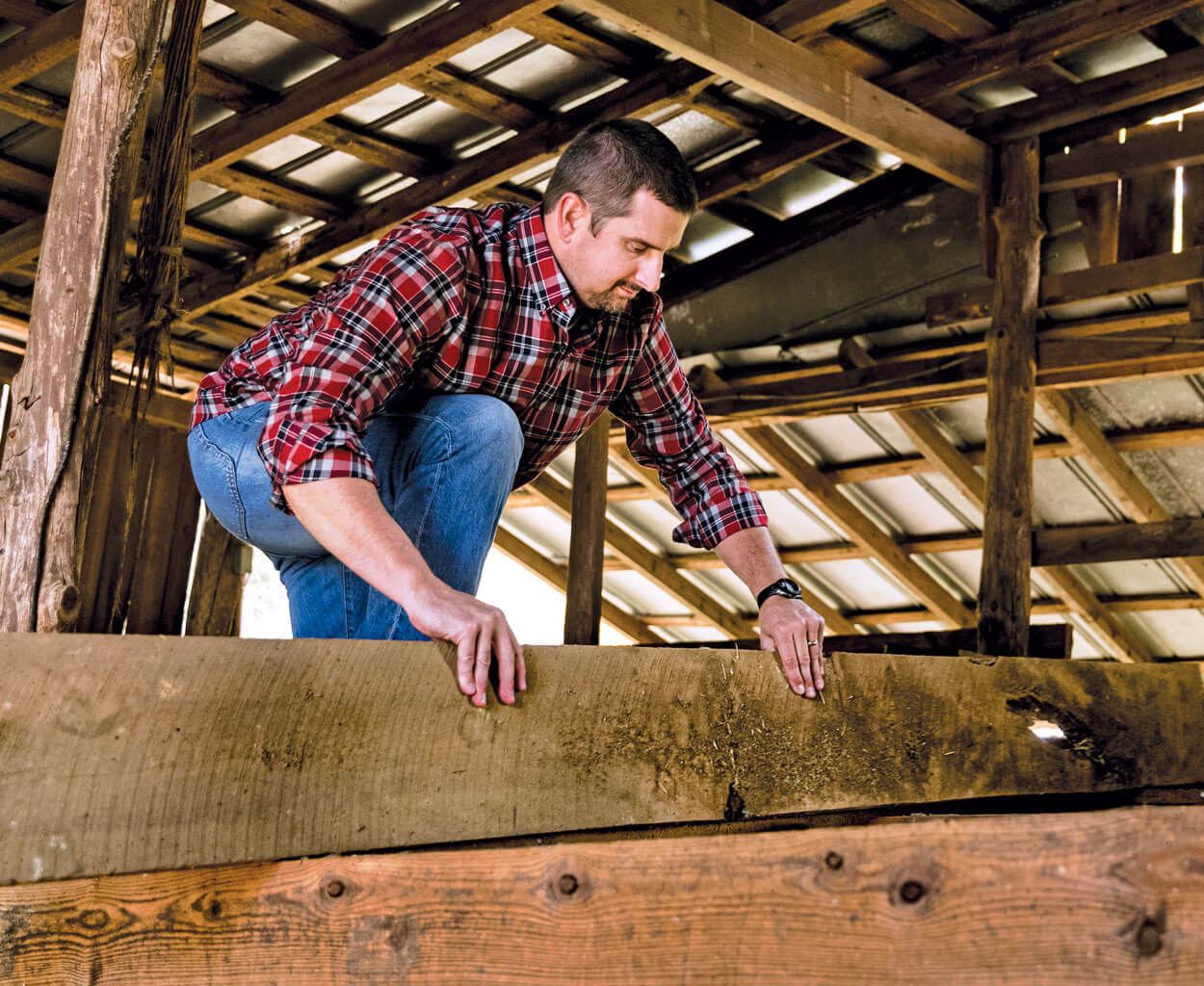 Zach occasionally returns to the barn on his grandfather’s farm, where, last year, he made two trips to find boards for the dining room table that holds so many Heath family memories. photograph by Charles Harris

In the early 1950s, Jones made the decision to pick up and move his family from a developed neighborhood in High Point to a 50-acre lot just south of Kernersville. Linda can’t remember precisely when she moved to the farm with her mother, father, and brother, but she recalls the year being pressed into the cement of the garage floor. Her father worked full-time as a machinist at the Adams-Millis Hosiery Mill in High Point while also raising cows and selling produce at a pay-what-you-can roadside vegetable stand. Linda remembers her parents’ dedication to Abbotts Creek Missionary Baptist Church. “Mother sang in the choir; Daddy was a deacon for as long as I can remember, and he taught the men’s Sunday school class,” she says. “The story goes that he was the best Sunday school teacher they ever had.”

By the time Zach was born, Jones had retired and sold 14 acres of the land to his brother. Nearly every weekend during elementary school, Zach visited his Pawpaw and Nana’s farm with his older brother, Bryan. “They would have moved there if we let them,” Linda says. The 36 acres that the boys roamed included the Joneses’ ranch-style home, an impressive vegetable garden, multiple cow pastures, and the barn. Zach spent those days jumping from the barn’s loft into piles of hay, working in the garden with Pawpaw, and baking with Nana. “They were very fun grandparents,” he says. “We just had a ball; we could do whatever we wanted. There were just no rules.”

When Zach’s cousins came to visit from Tennessee, the pack of Jones and Heath kids would roast marshmallows and hot dogs around the firepit on the back side of the farm. What they experienced, Zach recalls, was pure elation — the type of freedom that only far-reaching fields framed by a vast blue sky can offer. They ran in circles through the woods, built dams in the streams, and tried to catch the pony that never wanted to be caught. “She thought she was a cow,” Zach says. The pony, named Ginger, had spent so much time with the cows that she didn’t want the kids to ride her. Pawpaw made sure they got a ride anyway.

Zach’s memories of his Pawpaw remain clear. He recalls the way his grandfather dressed (in navy Dickies work pants and a denim button-down), what he ate (“anything with a lot of salt on it”), what music he listened to (The Oak Ridge Boys), and what TV shows he watched (The Young and the Restless). Pawpaw’s health began to decline by the time Zach turned 8, but that didn’t stop him from working the farm. “One time, when my Nana was in the shower, he snuck out and went to make sure the cows had water,” Zach remembers with a chuckle. “She was not happy with him.”

Zach was in sixth grade when his Pawpaw died. He helped his Nana with the farm until she moved into an assisted living facility in the mid-’90s when Zach was in high school. By the time she died in 2015, Zach’s connection to rural life in North Carolina had ended. No one in the Heath or Jones families has lived on the farm in two decades. The family now leases the land to a man who uses it to grow hay.

Linda would like to keep the farm in the family, but Zach, now 38, doesn’t see a future that involves him living on the land. Today, he sells health-care equipment for Philips Medical Systems, and Lauren prefers to raise the kids in a suburban neighborhood. But if Zach couldn’t live on the land, he thought, why not take a little bit of the land with him? “I wanted to have something from that place in case we do sell the land or don’t ever go back,” he says.

When Zach’s Nana died, his connection to rural life ended.

One day last year, he approached his wife and his mother with a plan: He would transform parts of Pawpaw’s barn into a dining room table. Lauren and Linda were hesitant, initially. For one thing, having a table custom-made with reclaimed wood can be expensive; for another, the wood from the barn wasn’t in the best shape. But Zach was determined. “It was so important to him,” Lauren says.

She helped jump-start the process when she saw a table made by Duvall & Co., a Wake Forest furniture shop, at a friend’s house. Maybe, she thought, the shop could create the farmhouse table that she and Zach envisioned.

In October 2018, Zach made two trips to the farm and picked through wood that had been collecting dust in the barn’s loft and cattle chute. He brought the boards to Duvall & Co.’s lead carpenter, Josh Hollar. Some of the wood was rotted and twisted, and it still smelled of cow feed and manure. “The problem is, when I do a project with someone else’s wood,” Hollar says, “I don’t know what environment it’s been in, so I can’t guarantee whether it’s dry.” He was able to pick out pieces that could hold up through years of family get-togethers and camaraderie — and build the family a table in Duvall & Co.’s most popular style, the High Point Trestle. 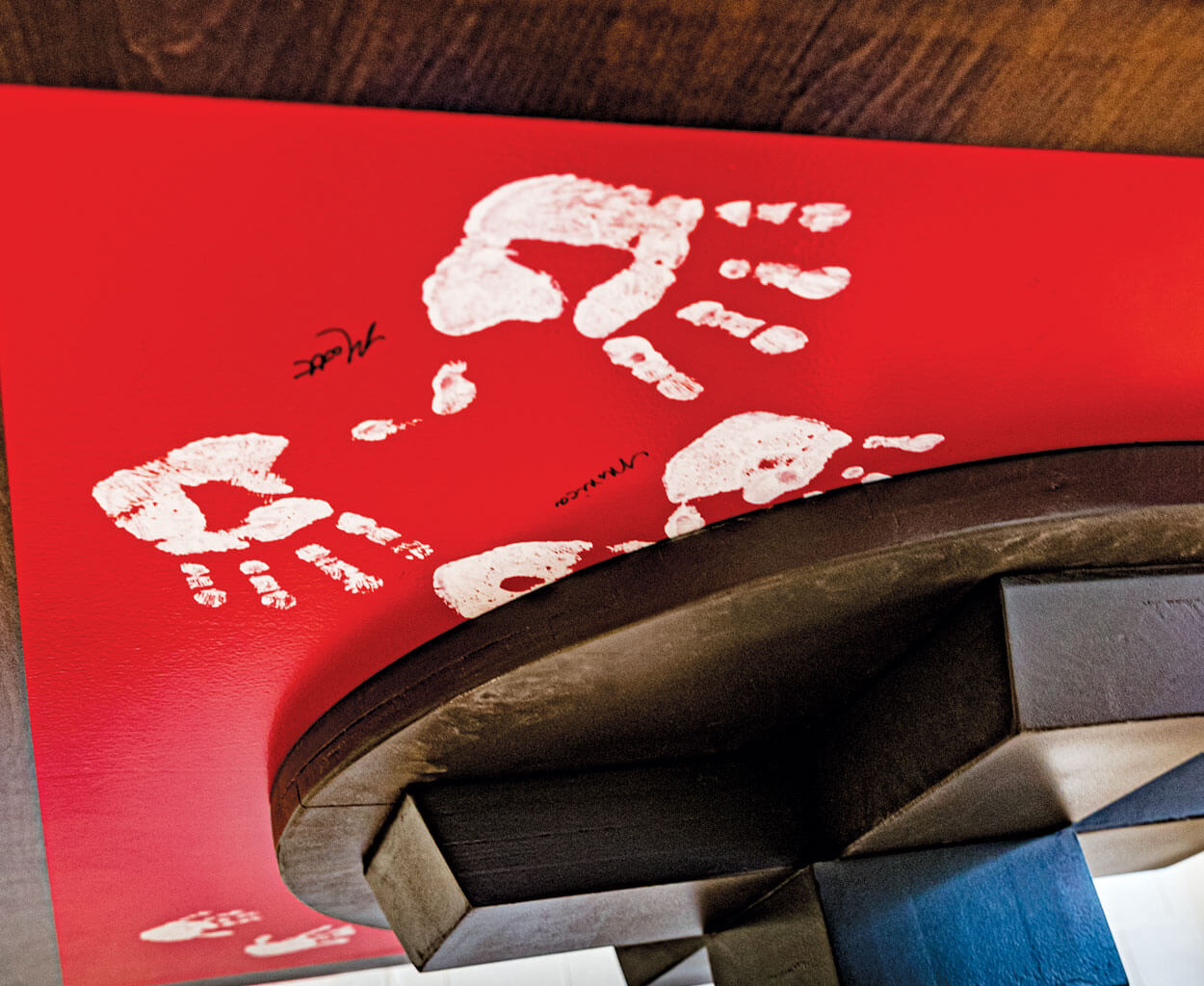 Before Duvall & Co. sends tables home, families press their painted hands on the underside as a symbol of what family means: togetherness. photograph by Charles Harris

When the table was completed, the finished top fastened to its frame, Duvall & Co. added one final memorable touch: The bottom of the tabletop, painted crimson, includes each family member’s handprints pressed in white. The prints are a reminder of what a family table represents: unity, support, and companionship. For the Heaths, and specifically for Zach, this year’s Thanksgiving table is an embodiment of everything his grandfather taught him. “I’m sure, in an innate way, he taught me to be kind, work hard, and eat your vegetables,” Zach says.

The table is an homage to the seeds Jones planted so his family could blossom.

These days, Zach jokes that he’s a “farmer stuck in suburbia.” Every time he walks through the front door of his home and passes the dining room table, his past and present collide. The table is a testament to the love and sweat that Pawpaw poured into the land, an homage to the seeds he planted so that his family could blossom. It’s a reminder that as rural and suburban life in North Carolina continue to evolve, the connection between the two will endure through all of life’s seasons.