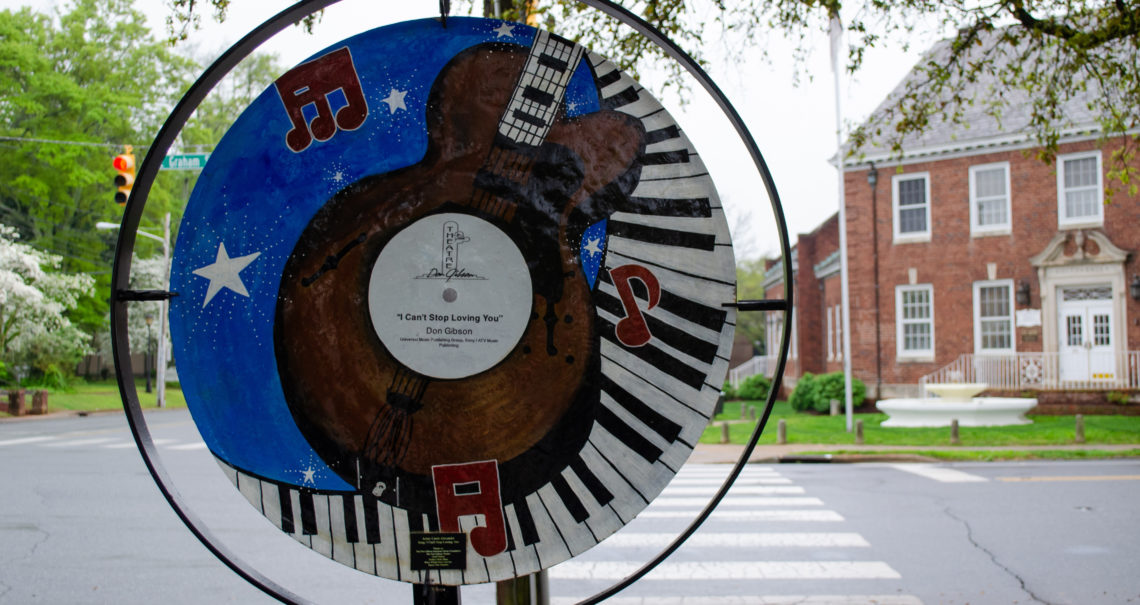 An hour west of Charlotte, the Foothills city of Shelby’s buzzing commercial district boasts an internationally renowned centerpiece: the Earl Scruggs Center. Opened in 2014, the cultural museum honors one of Cleveland County’s most famous sons — Scruggs, who pioneered a three-finger picking style for the five-string banjo in the 1940s that helped revolutionize bluegrass music.

Along with bluegrass fans from all over the world, weekenders from across the state flock to Cleveland County to take advantage of musical events, a burgeoning restaurant scene, a family-friendly farmers’ market, and gorgeous area hikes. Read on for our guide to planning your next weekend getaway.

Cleveland County is the quintessential heart of Carolina culture. From historic Bluegrass roots to world-class Carolina BBQ, wineries, and craft beer, from Revolutionary War heritage to vibrant, walkable towns or rivers and trails, it’s the perfect place to find your rhythm. 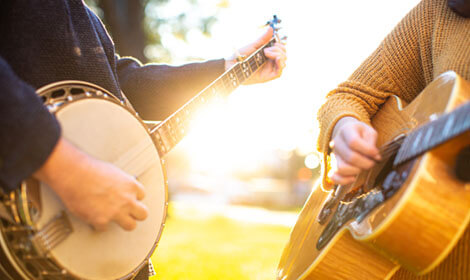 Check in at Morgan and Wells, an Uptown Shelby bed and breakfast originally located a few blocks from Shelby’s central square. The 110-year-old craftsman home was salvaged by Melanie Graham, a Gaston County native who moved the 230-ton building across the street on North Morgan and remodeled it after the concept of communal living she observed during her decade abroad in Italy and Heidelberg.

“I had experiences with hostels and that type of shared travel long before the platform of Airbnb really existed on the level that it does now,” Graham says. “My family will tell you that I talked about it for 20 years before the opportunity in Shelby materialized.”

Choose from five guest rooms — the James Edward and Melvin Maurice each have king-size beds and architectural fireplaces — and look forward to tomorrow’s breakfast made by Chef Fred Reeves, who trained in Atlanta and New Orleans. Talk to the innkeeper about your weekend plans — if your sights are set on a hike, you may want to take advantage of a number of in-house spa services: facials, Swedish massage, and hot stone therapy are a welcome relief after a day of hoofing it. 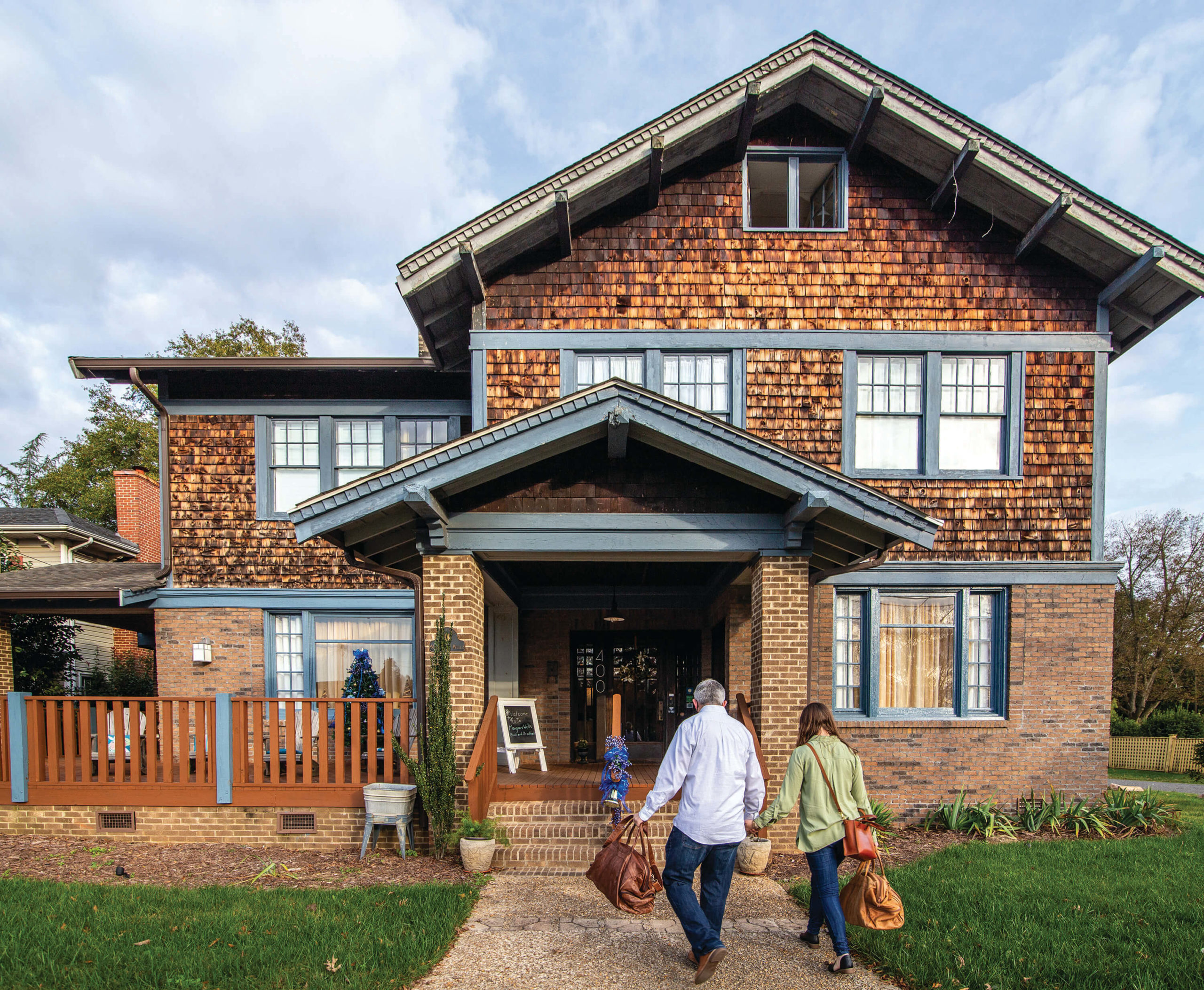 Morgan and Wells, an uptown Shelby bed and breakfast, is housed in 110-year-old craftsman home. photograph by Cleveland County Travel and Tourism

For dinner and drinks, stroll four blocks south to Newgrass Brewing Company, Cleveland County’s first and only craft brewery. Located in an 8,600-square-foot former department store, the project opened in 2015. Order a Fiddler’s Nightmare or Mindkiller double IPA, or the Bridges of Woe imperial stout. According to owner Roger Holland, Newgrass has become yet another must-taste location for North Carolina brewery tourists.

“I don’t think it’s an exaggeration — 95 percent of the people who are in that brewery all day Saturday and Sunday are not from Cleveland County,” says Holland, who’s known to put a personal touch on Newgrass’s large, dog-friendly open-air patio. “Many times, I’ve stayed out on the patio to scratch the dog while the owners go in to order.”

Newgrass makes the most of relationships with local farmers, so their food and beer exist in a type of closed-loop system: They offer the spent grain from their brewery to Dennis Martin of nearby Martins’ Charolais Farm, who uses it to feed his stock. Newgrass then uses Martin’s beef for their farm burger. Wes Allen, the executive chef at Newgrass, also sources seafood from the Outer Banks for weekly specials. 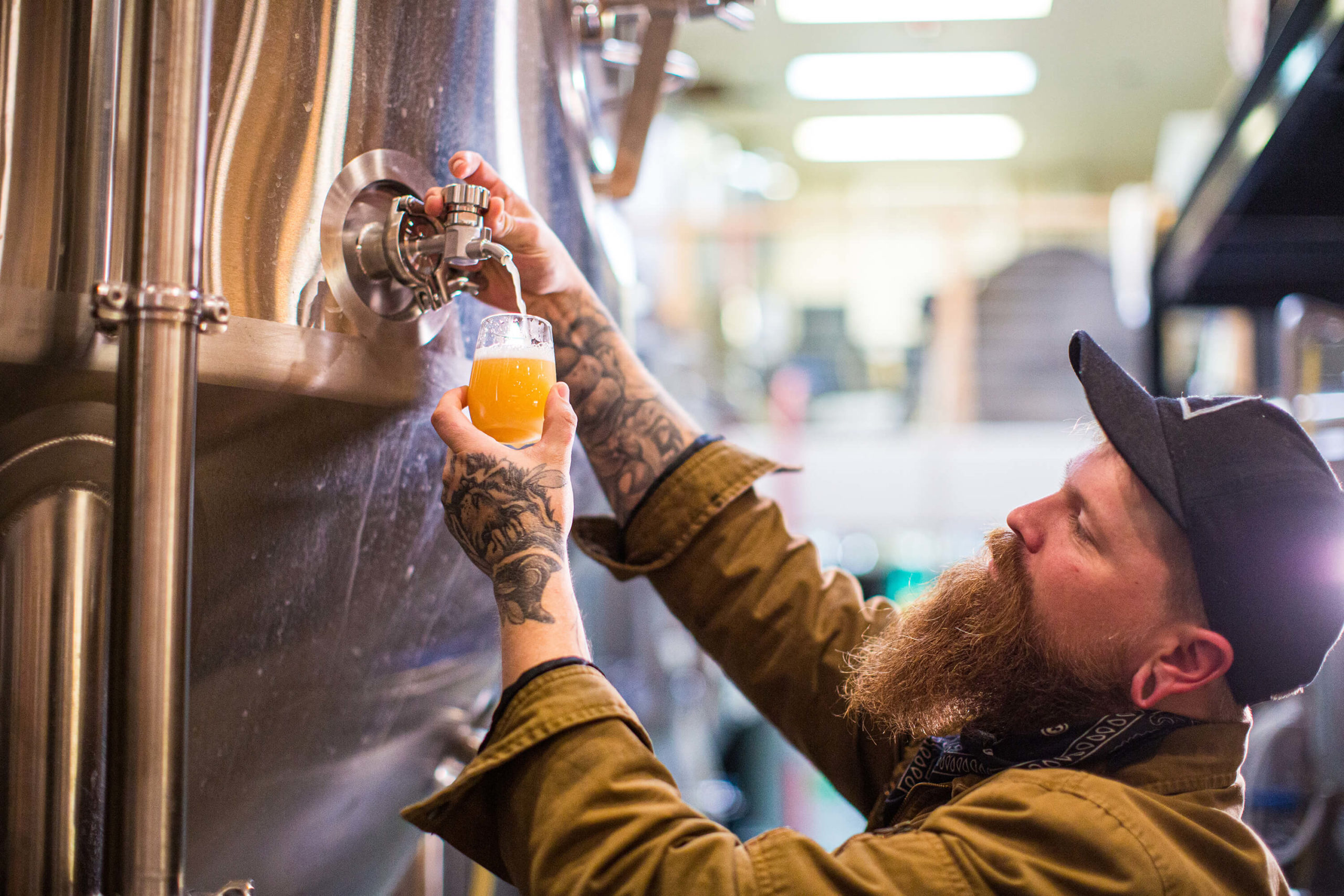 After dinner, head to the Don Gibson Theatre, which opened in a former art deco movie theater in 2009 and has emerged as Shelby’s premier music venue. Gibson, born in Shelby in 1928, became a renowned songwriter with Nashville favorites like “Sweet Dreams” (a hit for Patsy Cline in 1963), “I Can’t Stop Loving You” (covered by Ray Charles in 1962), and “Oh Lonesome Me” (Neil Young’s version was on his 1970 album After the Gold Rush). The 400-seat venue is intimate enough to be cozy but glamorous enough to attract top talent from around the country.

Fueled by Chef Reeves’ breakfast delicacies, head Uptown to mingle with the locals. “When the weather is nice, people are Uptown having breakfast or mimosas,” says Audrey Whetten, executive director of the Uptown Shelby Association. “And we have an awesome farmers market.”

The Foothills Farmers’ Market offers fresh produce from local growers and is a fantastic strolling and grazing option. Under a permanent pavilion that spins huge fans during the summer, visitors can get pour-over coffees, cinnamon buns, hand pies, and other sweets. If you’re hungrier than that, a grilled cheese or breakfast casserole from T’s Tiny Farm food truck might do the trick. A few times a month, the market hosts live music, and kids can take part in a program called Power of Produce, which provides them a free token to select a fruit or vegetable they might not have seen or tried before.

A few blocks east of the farmers market is WorkShop Vintage Market, a huge indoor market dedicated to antiques, local crafts, and vintage items from dozens of local vendors. And to check out the work of more local artists, stroll across the town square — stopping at the Earl Scruggs Center for a detour into some musical and cultural history — then on to Buffalo Creek Gallery, a co-op art gallery with pieces from more than 50 local and regional artists. To complete your shopping, head around the corner to the Cleveland County Arts Council’s ETC gift shop, a perfect stop for a souvenir. Here, you can browse work from local and regional artists’ works ranging from paintings and journals to jewelry and pottery. 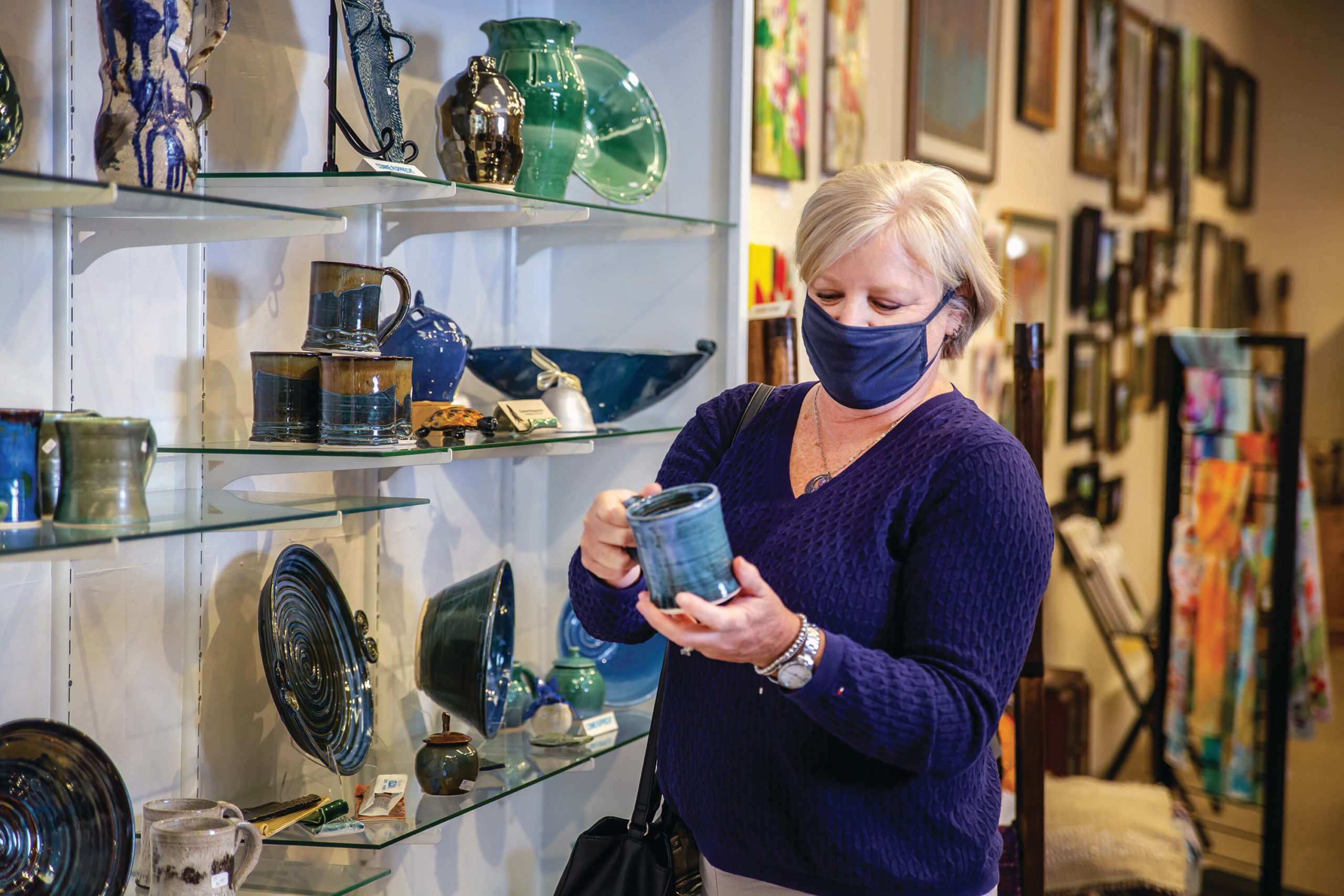 Buffalo Creek Gallery has pieces from more than 50 local and regional artists. photograph by Cleveland County Travel and Tourism

After that, depending on your energy level, you can either grab a pick-me-up next door at LilyBean Coffee & Creamery or get a glass of wine at Dragonfly Wine Market. Both are right by RollOver Pets, where dog owners can let their pets try a variety of treats to find a favorite.

For dinner, Pleasant City Wood Fired Grille offers pizzas, sandwiches and craft beers in a brick building with windows that roll up and a large patio. If you’re in the mood for something fancier, Ni Fen Bistro’s 100-plus wine list, grilled salmon, and pot stickers may be your path.

After breakfast, lace up your walking shoes for a number of fantastic hiking and strolling options within a 30-minute drive. The Broad River Greenway follows its namesake over 1,500 acres of nature preserves. At the Kings Mountain Gateway Trail, four trails range in length from .25 miles to 4.5 miles — consider the moderate to strenuous Cardio Hill trail, which features a beautiful overlook of Kings Mountain and the surrounding areas. And South Mountains State Park, to the north, offers more than 20,000 acres of trails and camping.

Have time for one last meal in Shelby? You can’t leave without trying award-winning, hand-chopped, Lexington-style barbecue. Head over to the Red Bridges Barbecue Lodge, which locals will tell you has been making barbecue the “right way” since 1946 — slow-cooked over hickory and oak all night long. 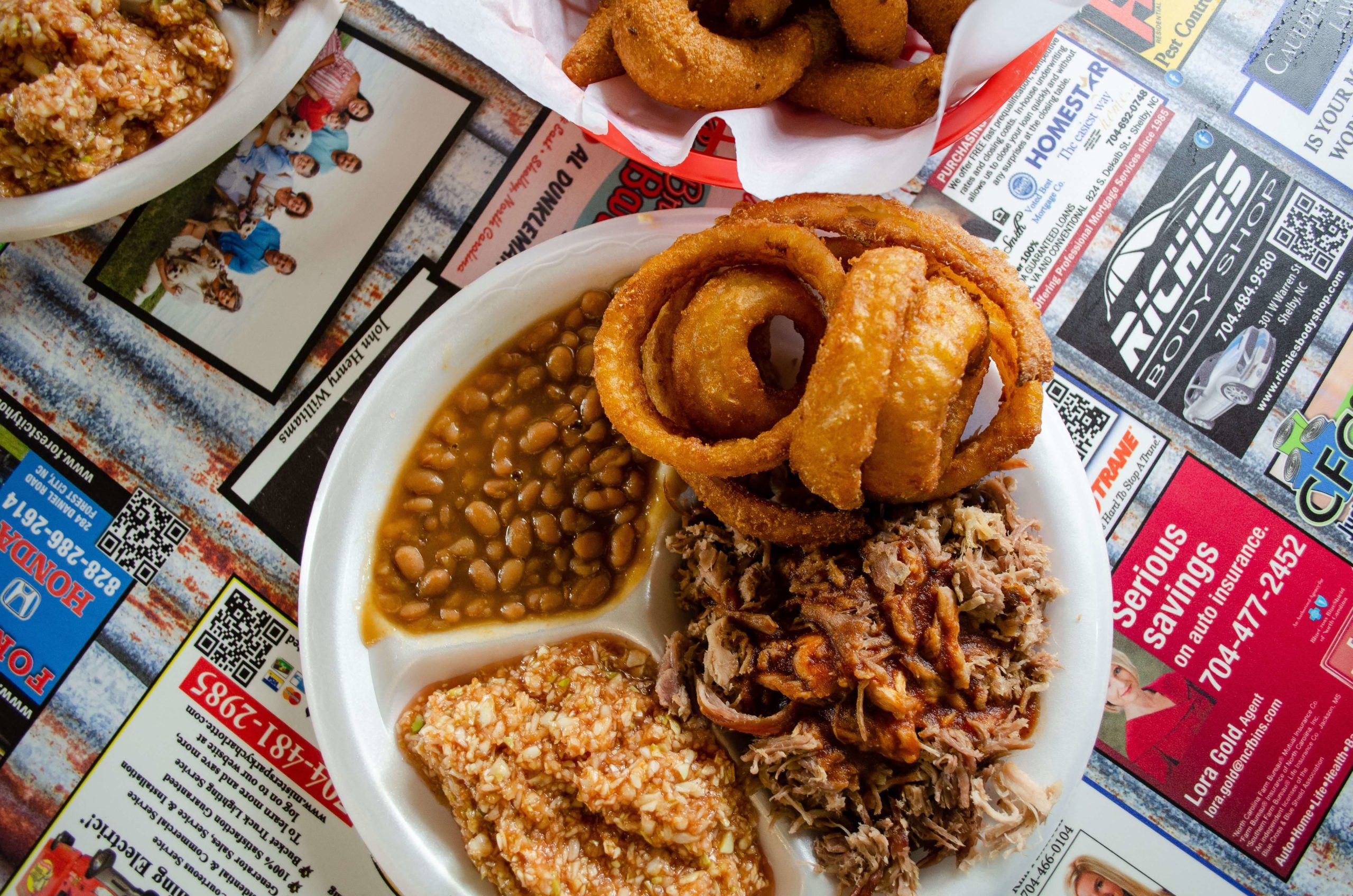 When you’re ready to make your way home, there’s the option of one for the road: Baker Buffalo Creek Winery and Vineyard has eight different varietals and a tasting room that’s located in an old barn.

“People have asked me if I want to move back to Raleigh, where I’m from,” says Whetten, who relocated to Shelby in 2013. “I realized that, actually – other than being close to my parents – all the things I want are here in Shelby. I can have the life I wanted here.”