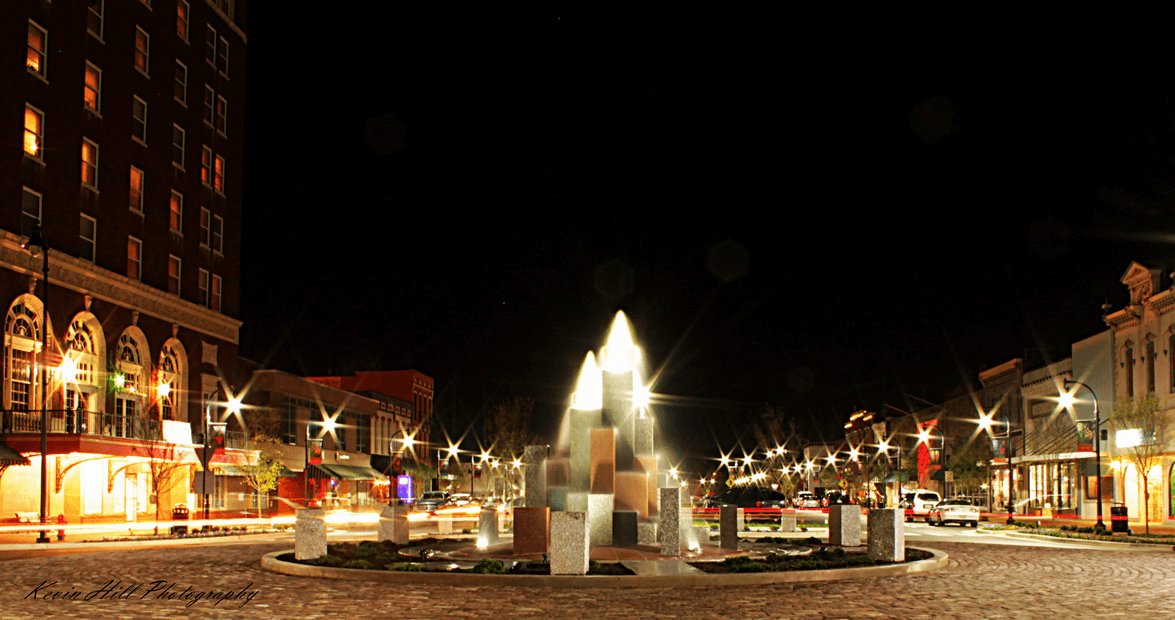 Goldsboro may be best known for its rich agricultural heritage and Seymour Johnson Air Force Base, but it’s high time to give this modern eastern North Carolina city a second look. Packed with parks and nature preserves, an abundance of great eats, and agritourism activities that celebrate every season, Goldsboro is a contemporary twist on a small, Southern town. Here’s the buzz on how you can make the most of your visit.

Your first order of business is to check into the Plum Tree Gardens Bed and Breakfast on George Street. Just two blocks from downtown, this renovated 1800s Victorian-era house is a welcoming home base. It features an American Indian art gallery, light-filled rooms, and fruit and pastries for breakfast — plus gardens to wander that bloom through December.

For dinner, you have plenty of options, including Brisas Latin Cuisine, Laughing Owl Restaurant, and Barrique, three local favorites within walking distance of the historic Paramount Theatre — your next stop for a first-class performance. The historic theater opened in 1882 and was rebuilt in 2008, and today it hosts classic movie nights, plays, concerts, and dance companies — and the Paramount Performing Arts Series brings in acts from around the world. 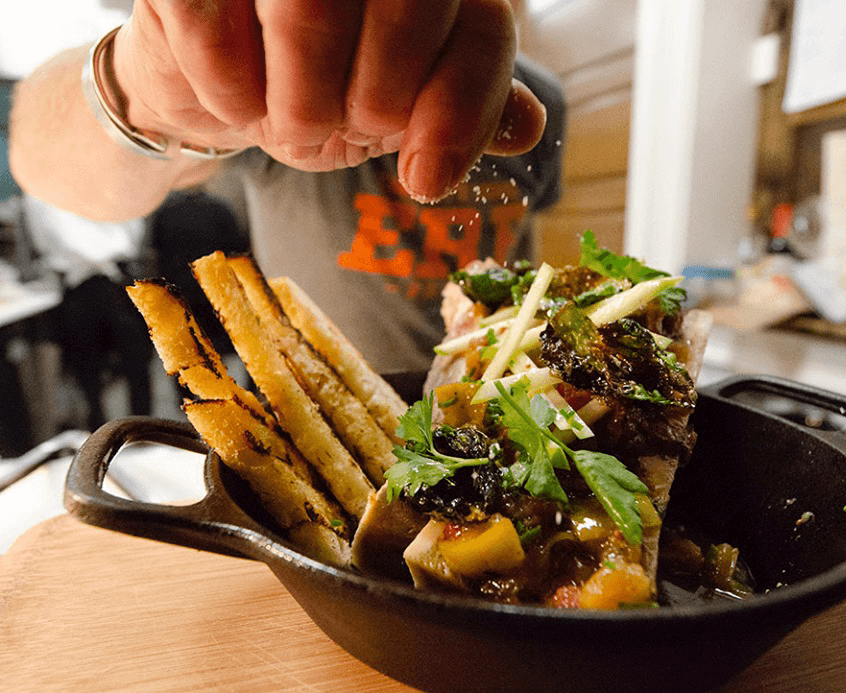 After the show, walk over to Goldsboro Brew Works, a veteran-owned taproom and bottle shop with a vintage arcade game room for a flight of beer before turning in for the night. 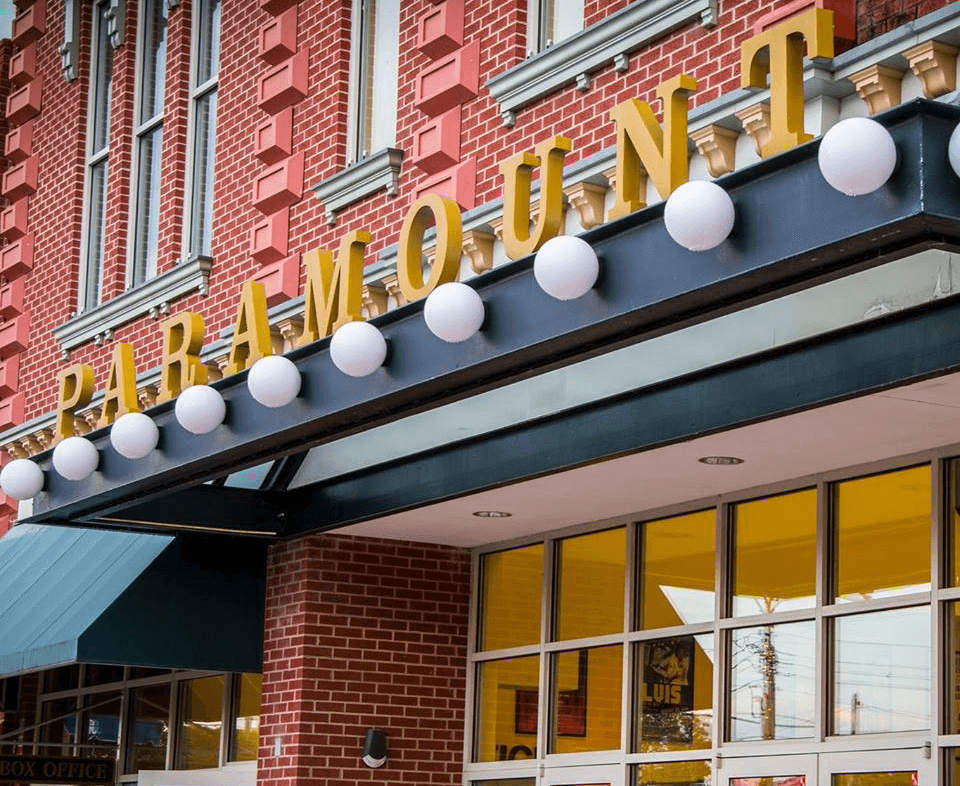 Jumpstart your day with a cup of fresh-brewed coffee from Labrar or Gypsy Bean, both on Center Street and an easy walk from your bed and breakfast. 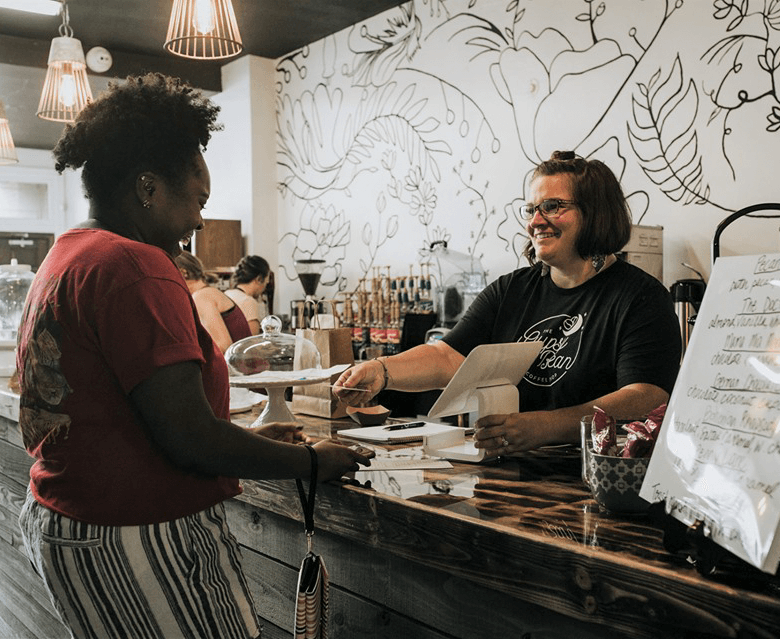 At Gypsy Bean, you’ll find a warm welcome with your coffee or tea. photograph by Gypsy Bean

As every Goldsborian knows, the best days begin with a little sugar. Mickey’s Pastry Shop has been around for more than seven decades and offers fresh-baked muffins, giant cinnamon buns, and famous doughnuts. Be sure to snag some options for later, too. “Our cream puffs have been a favorite around town since my grandfather Mickey started making them more than 73 years ago,” says owner Melanie Daniels, a Certified Master Baker.

After breakfast, take a drive out to the country — agriculture forms the backbone of Goldsboro, and local growers keep the city supplied with a steady stream of seasonal fresh goodness: 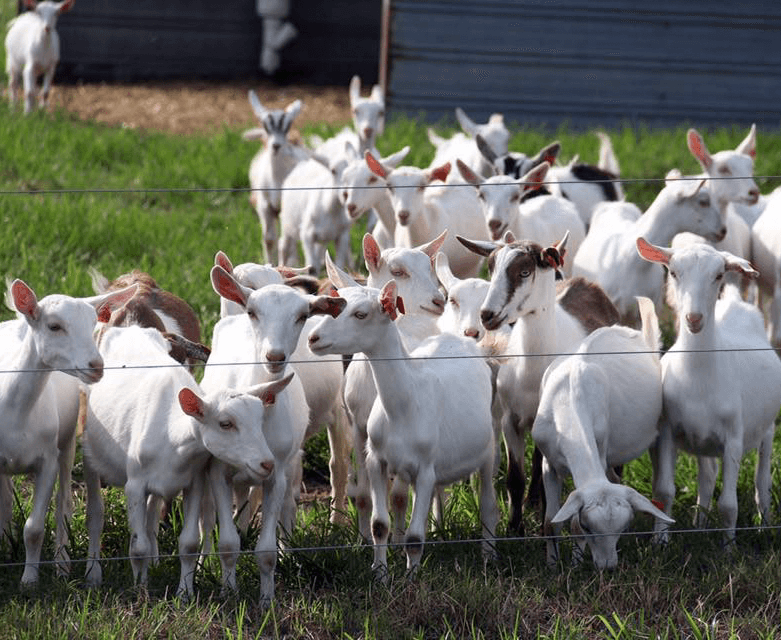 Want to swap your morning on the farm for an hour of indulgence? Treat yourself at the Skin Therapy Day Spa on East Walnut Street, where you can choose from their menu that features over a dozen facials, massages, and body care packages for relaxation and renewal.

For lunch, do as the locals do. That means eastern-style barbecue, and Grady’s BBQ is the real deal. Don’t be dissuaded by the humble building — the Gradys cook their pigs the old-fashioned way in pits out back. Don’t forget to try the fried chicken and sweet tea. 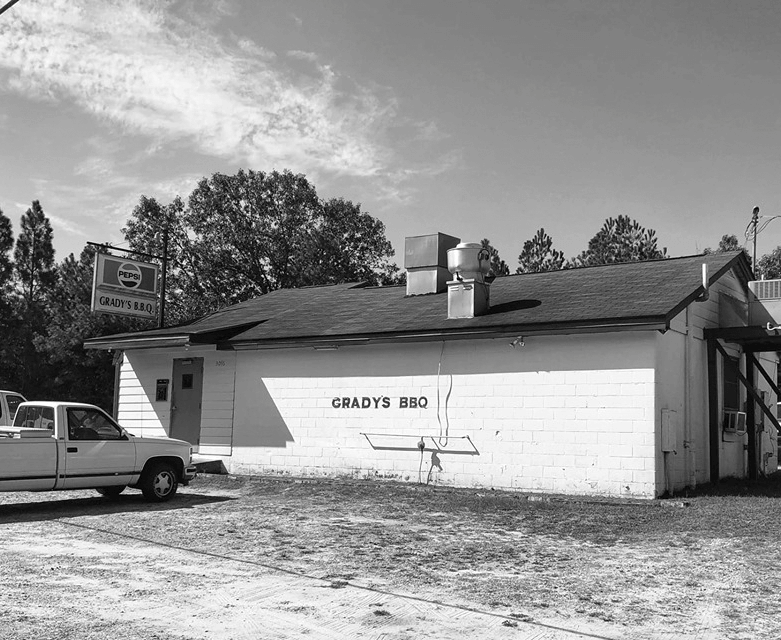 The white cinderblock exterior doesn’t give much away, but Grady’s is home to some of the best ’cue in Goldsboro. photograph by Denise Ruffin

Or head to B. Sweeney’s Restaurant and Fine Teas. The downtown teahouse offers sandwiches and wraps with international flavors, like Cuban marinated roast pork and Jamaican jerk chicken, but we love the tea sandwich selection. You can even order a pot of tea that comes with the chef’s selection of tea cookies or scones.

If you’re in search of more action after lunch, head to Downtown Escapes, where you and your family or friends can channel your inner super-spies as you attempt to escape from a locked room. Or head over to Whoopaxe Throwing Lodge, where guests ages 10 and up can play darts — with axes and ninja stars.

Grab your farm spoils and mosey over to Well Travelled Beer, Goldsboro’s first craft beer shop. You’re free to bring your own snacks to this taproom and bottle shop, so pair your fresh cheese with wine, beer, or sake for a little pre dinner appetizer. The gathering spot also has a great selection of charming gifts to browse while you sip.

Once you’re good and rested, take a walk downtown and window-shop menus to find a local spot for supper — and keep your eyes peeled for Goldsboro’s art installations and murals found on roundabouts and on buildings downtown. 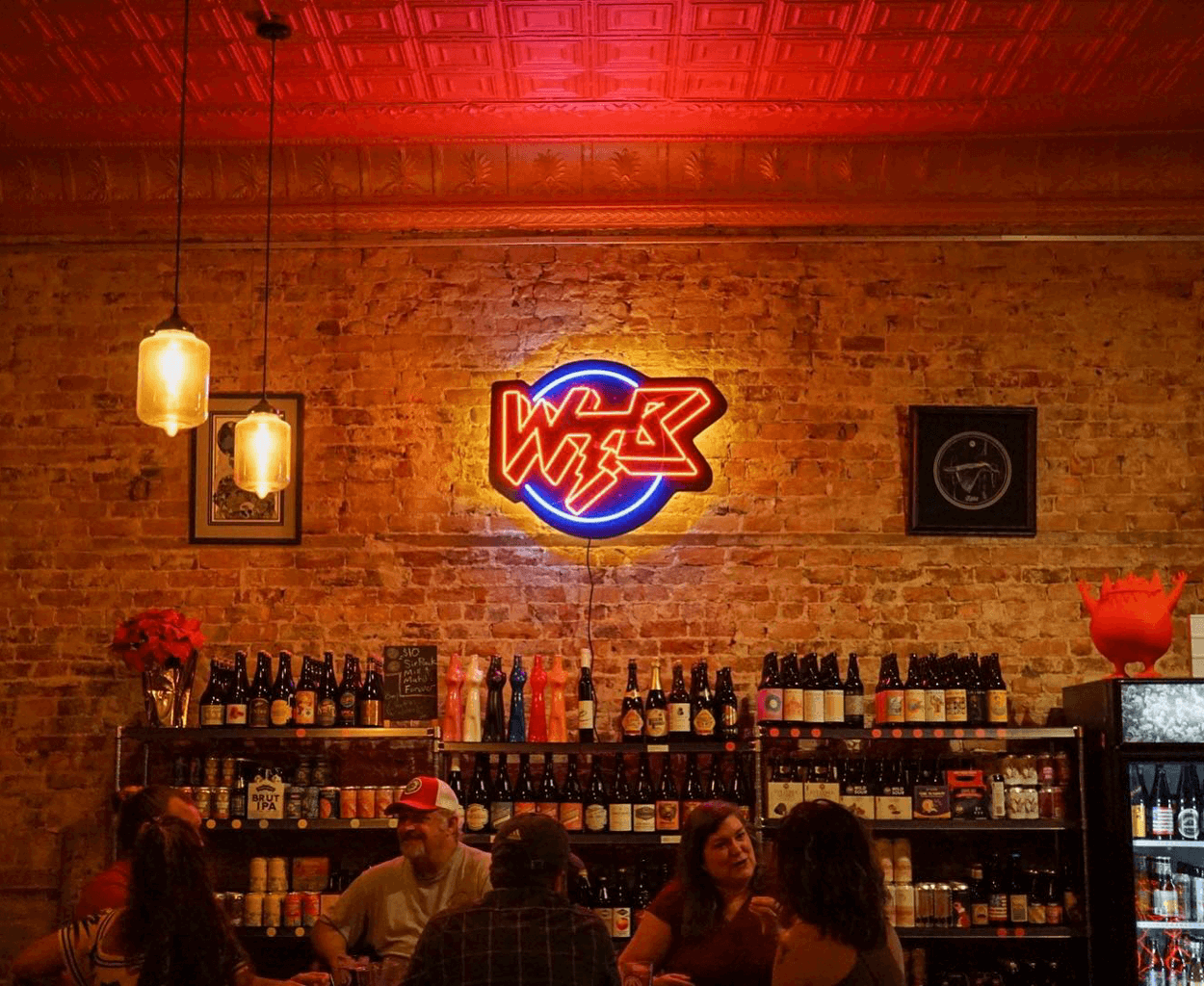 In the afternoon, pick up some sandwiches and sides from McCall’s BBQ & Seafood Restaurant and head out for a picnic at one of Goldsboro’s scenic parks. If you eat in, watch the jets soar overhead as you tuck into your BBQ — the restaurant is directly underneath the flight line of Seymour Johnson Air Force Base. Save room for the banana pudding!

If you have kids, Herman Park will make you a hero: It offers play equipment, picnic shelters, and seasonal miniature train rides. Old Waynesborough Park is a great choice, too. The park features four miles of walking trails and a historic village to explore on more than 150 acres along the Neuse River. For the more adventurous, head to Cliffs of the Neuse State Park in Seven Springs. You’ll find cypress groves, a swimming lake that’s open May through September, and astounding views of fall foliage from atop Wayne County’s cliffs. It’s the perfect place to relax and reflect on the weekend. 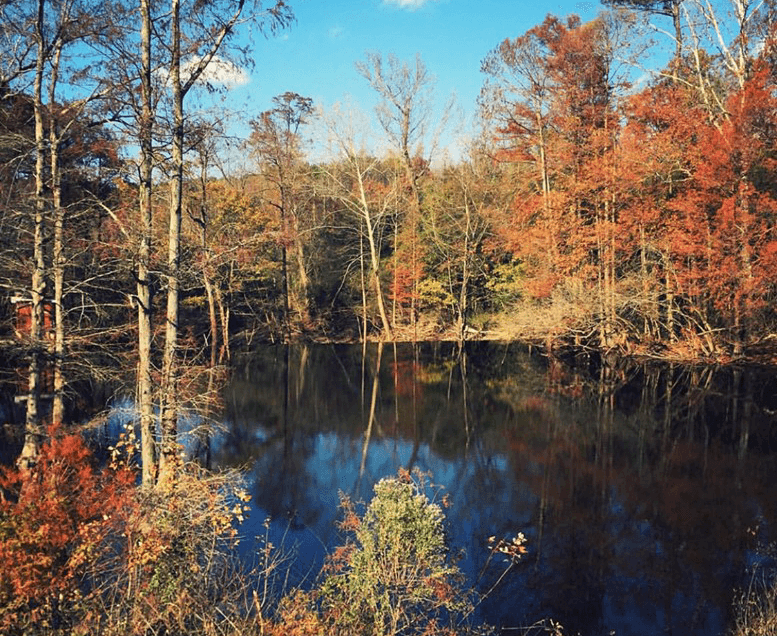 Stunning fall views await in Neuse State Park. Want to look even closer? Rent a kayak or go for a swim. photograph by Jennifer Weddle

Pro tip: If you’re fortunate enough to visit on a long weekend, call Seymour Johnson Air Force Base ahead of time and schedule a spot on one of their Thursday tours. On the last Thursday of each month, the base lets civilians get up close to the jets and see behind the scenes of this military base famous for its 4th Fighter Wing. Call Visit Goldsboro at (919) 734-7922 to reserve your spot.

For more information on Goldsboro and the surrounding area, click here.