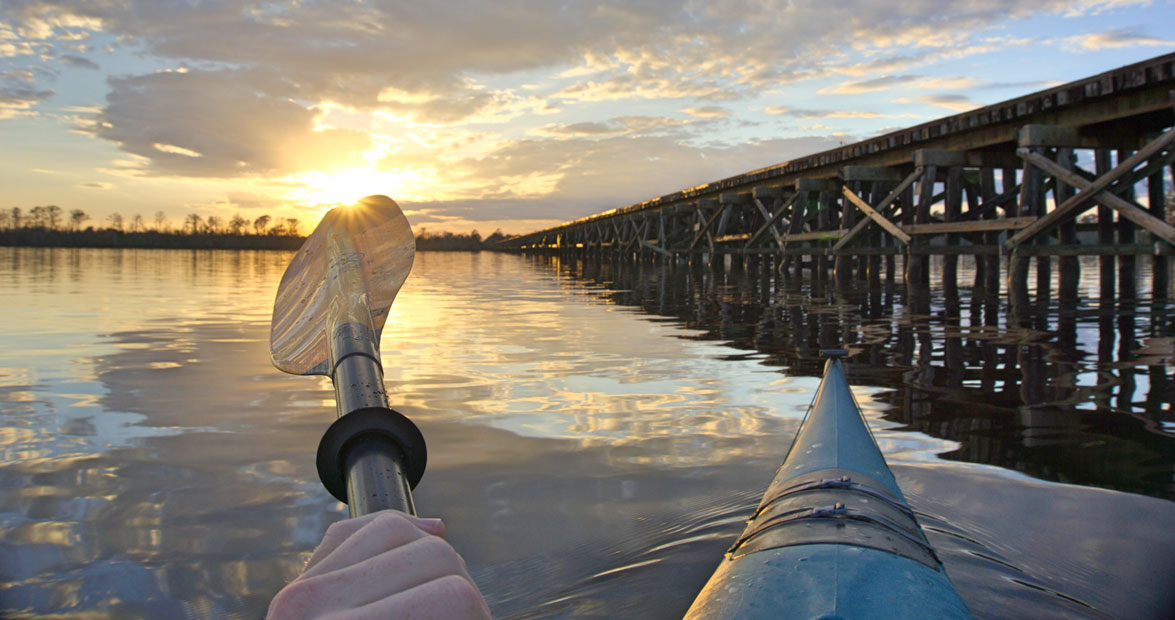 Situated right where the Tar River ends and the Pamlico River begins in Beaufort County, Washington was the very first city to be named after George. Yep, even before our country’s capital. Here, the river provides a perfect environment for wildlife to thrive, as well as opportunities for human visitors to spend afternoons wandering the mile-long waterfront promenade, paddling the Pamlico, exploring the shops downtown, and eating storied hot dogs under the oak trees at the Town Commons. Whether you’re looking to board a boat or relax on a wraparound porch, we’ll tell you how to spend a weekend at the river.

Rent a kayak or stand-up paddleboard for the afternoon and explore Washington by water. Located at the city’s public boat ramp, this outfitter stocks everything from sunscreen to life preservers, so you’ll be prepared for your adventure. Paddle past the waterfront to see downtown from a different perspective, and be sure to keep an eye out for the boathouse adjacent to the old Havens gristmill — though it’s no longer in use, it’s a famous and familiar site in Washington.

Tip: For a fun twist on paddling, check out the outfitter’s monthly Wine & Cheese Paddle.

Get your frank fix at Bill’s Hot Dog Stand

Bill’s is a Washington institution, and the menu has stayed the same since 1928. There are no fancy condiments. Just order a bag full of white paper-wrapped, oil-fried, nuclear-red hot dogs “all the way” — that’s with special spicy chili, onions, and mustard — and be prepared to share. Oh, and Bill’s is take-out only, so you might want to go early to avoid the line out the door.

Tip: To order like a local, don’t ask for ketchup — there isn’t any!

Enjoy afternoon tea at The Hackney

London calling! Try a selection of finger sandwiches, warm tarts, and dainty cakes at this former bank-turned-upscale restaurant with British influences. When renovating the unique space, owners Nick and Susanne Sanders — who lived in London for more than 20 years — were inspired by the “global city” feel of their former home and the Southern hospitality in their new home, which translates to the eclectic, seasonal dishes made with local ingredients. Whether you put your pinkies up at the full-service tea offered on weekend afternoons, sip a gin cocktail at the bar, or stop in for brunch or dinner, The Hackney will make you feel like royalty.

Tip: Order a gin and tonic, and try a variety of gin from around the world. “Given our soon to launch gin distillery, gin is really our thing,” Susanne says.

Explore our “sound-lands” at the North Carolina Estuarium

Located right on the waterfront, this environmental education center celebrates North Carolina’s coastal rivers and estuaries — an ecosystem where fresh and salt water mix that’s vital to our state’s wildlife and local industries. More than 90 percent of seafood caught by North Carolina fishermen spends at least part of its life in estuaries, and our state holds more estuarine waters than any other state on the East Coast. Explore more than 200 exhibits and aquariums and learn about life on the Pamlico River. Then, hop aboard the estuarium’s River Roving boat for a free 90-minute guided tour of the Pamlico-Tar River. 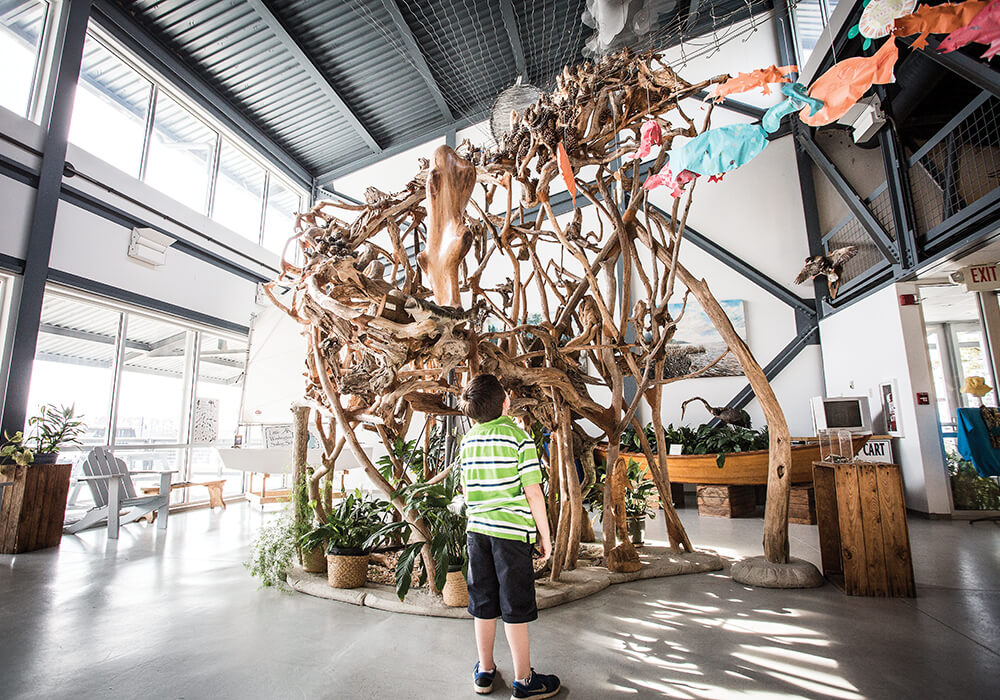 Inside a historic 1884 building downtown that once served as Washington’s town hall, you’ll find something sweet. Think carrot cake, oatmeal cream pies, brownies, pecan sticky buns, and cinnamon buns — treats dreamed up by longtime home baker Rachel Midgette, who founded Rachel K’s (the K stands for her middle name, Kathleen) in 2010, and began selling pastries and breads at local farmers markets. In addition to breads, pastries, coffee, and tea, there are also scratch-made soups, salads, and sandwiches. Order a cinnamon bun and a caramel iced coffee and sit at a table beneath an umbrella out front, or order some of Rachel’s grandmother’s chicken salad to-go and have a picnic on the waterfront a few blocks away.

Indulge in art and decadence at Elmwood 1820 Bed & Breakfast Inn

Built in 1820, this beautiful, columned mansion has a near 200-year history as a stately home on Washington’s Main Street, and even served as a Union Army headquarters and hospital during the Civil War. And while it features ornate Italianate-style detailing that reveals its age, today, it offers modern luxury perfect for those seeking respite. At night, curl up in a cozy robe with a glass of champagne or browse Elmwood’s impressive rotating collection of art before falling into a canopy-covered bed. In the morning, no matter how badly you want to get out on to the sprawling front porch with a cup of coffee, don’t miss the delicious homemade biscuits and gourmet multicourse breakfast.

Watch the sunset on the waterfront

Stroll along Washington’s waterfront promenade, which stretches nearly a mile alongside marshy islands, and spot boats and wildlife like great herons from the boardwalk before picking a spot to settle in and watch the sunset. In Washington, everything begins and ends with the water — including the perfect day. 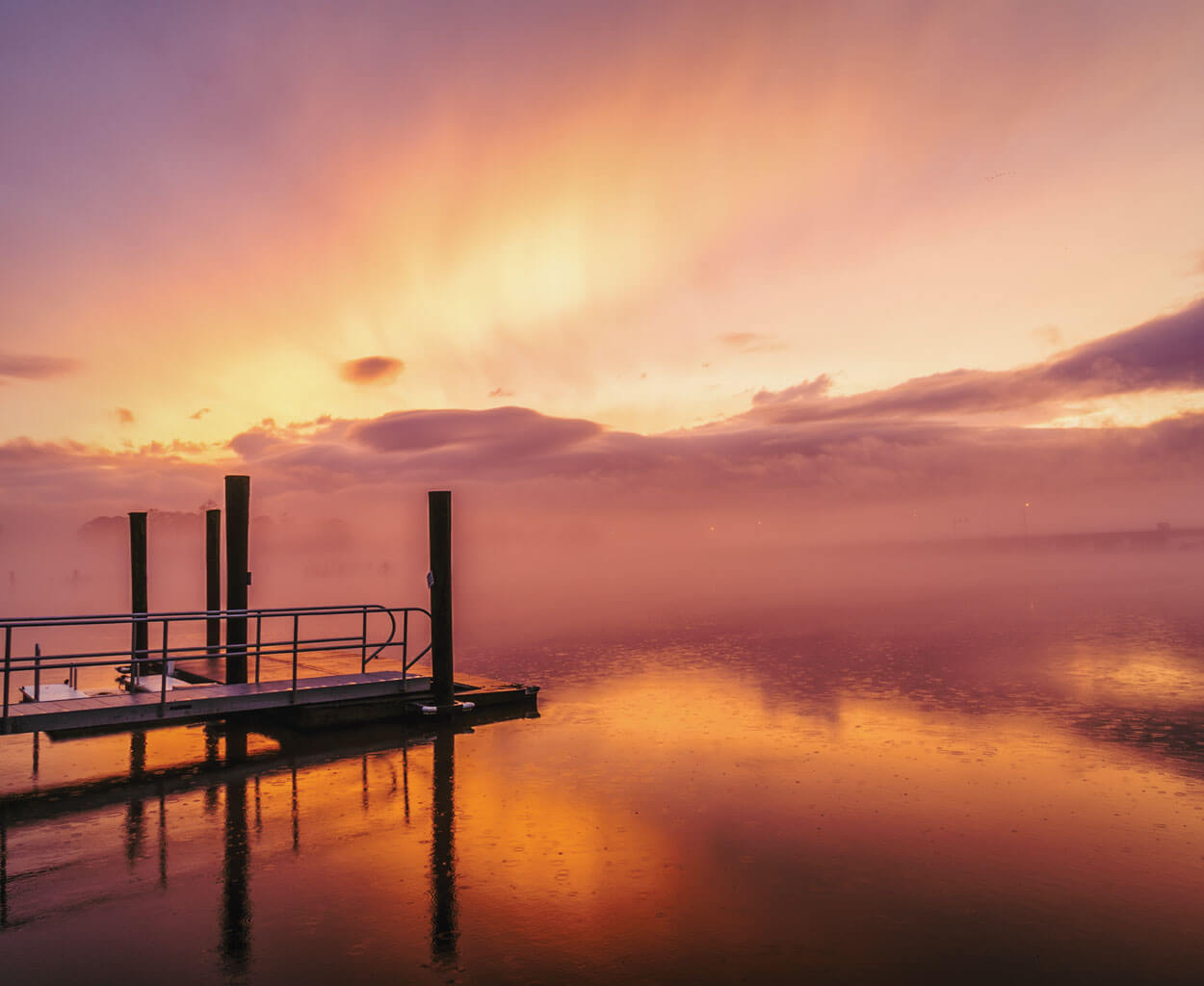 Head to the waterfront at sunset for breathtaking river views. photograph by James Patterson III