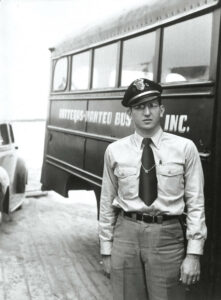 Before there were paved roads on the Outer Banks, there were the young Midgett brothers — Harold, Anderson, and Stockton, aka “Stocky” Midgett.

In 1938, the brothers — ages 17, 14, and 10, respectively — established the innovative Manteo-Hatteras Bus Line, which ferried passengers and packages daily across sandy beaches and, sometimes, shallow inlets to Hatteras Island’s various villages, fulfilling an important need for the roadless region.

The route was bumpy, with the brothers navigating sand ruts, surf-induced “potholes,” shifting dunes, and even the occasional shipwreck. Despite having deflated tires for better traction, their vehicle — first the station wagon, then a series of buses — often got stuck, and passengers would have to get out and push. “We used to call our route ‘the 101’ — 101 roads because there was no designated road,” Anderson once told an interviewer.

There were other obstacles to hurdle, too. The buses had to board a ferry to cross Oregon Inlet, and in the early days, when Stocky started driving, he had to sit on a stack of Sears, Roebuck and Co. catalogs just to see over the dash. Nonetheless, the business thrived into the early 1960s, when the completion of NC Highway 12 — and the opening of the Herbert C. Bonner Bridge over Oregon Inlet — allowed coastal drivers to use their own transportation.