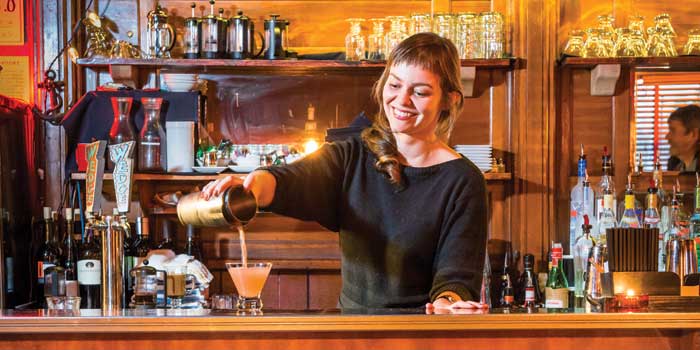 Edward Ellington is at the bar, and the bar is full. He’s wearing a polo shirt, and he says this place doesn’t look like much, but man, you’d be wrong if you thought that. He’s here with his wife, Ashley, having dinner and a cocktail, talking about the house he wants to buy on the north side of town. A Buck Owens song plays softly in the background. A quiet murmur bounces off the maroon walls and concrete floors and the black drop ceiling. The sizzles and the clank of cutlery fill in the gaps. The Ellingtons just moved up here from Weddington, and they’re not locals yet, but they have figured out one thing: If you want to eat at The Admiral, and you didn’t make the reservation the day before yesterday, you have to sit at the bar.

The menu is succinct. The kitchen is right here, right in the open, not hidden in back. It doesn’t reveal secrets, though. The baby arugula salad has apple, hazelnuts, and Humboldt Fog goat cheese, but the dressing is what dazzles. The truffled rutabaga soup, listed as truffle oil, parsley, and paprika, is obviously hiding something. The Dark ‘n’ Stormy has homemade ginger beer.

The Ellingtons found it. They keep coming back. They pay their bill and politely head out.

You could be looking for The Admiral, driving down Haywood Road, look right at it, and have to turn around and have a second look. It is hiding here in plain sight, in a cinder-block building with an orange, yellow, and gray paint job, in between BJ’s Food Mart and the empty lot with barbed-wire fence. But once you find the place and park on the street and walk inside and try the food, you wonder.

Asheville is beards and tattoos and quirk. It is dressy, but not too dressy because you don’t want people to think you put a whole lot of thought into what you’re wearing, even though you did and you want them to know that, a little bit. Yeah, there’s the Biltmore and Biltmore Village and The Grove Park Inn, but man, there’s good stuff downtown, too: a nucleus of interesting that any city outside of Portland, Oregon, would kill to have. There are the bakeries, cafes, restaurants, wine bars, and craft-beer joints. Musicians play in doorways. The Orange Peel is at one end. Malaprop’s is at the other. A VW bug, an old one, turns left at an intersection, and that is so Asheville. A guy with a bushy beard and tiny spectacles runs across a street, and no, that guy is so Asheville. There are pinwheels in front of the L.O.F.T. on Broadway, and the whole thing screams Asheville. The city is a spring of drinkable water on a dry mountain, and downtown is the default.

There is West Asheville.

If Asheville is a town that puts on a hell of a show for tourists, there has to be a place where that town goes home at night. And that is West Asheville, the community on the other side of the French Broad River, the one with the affordable bungalows and porches and car-repair shops, that is the place The Admiral inhabits.

Drew Wallace, with his short black hair, black shirt, and focused gaze, mixes drinks behind the bar. Wallace owns this place with Jonathan Robinson. They get one question a lot.

I mean, why The Admiral?

It was the best name they came up with, Wallace always says. There was a Paul McCartney song about Admiral Halsey, and Wallace had an uncle who played against the Milwaukee Admirals once, but it really doesn’t mean anything. People think it should. Like the whole place should be nautically themed, or they should serve a lot of seafood. But it really doesn’t mean anything. It didn’t then, anyway. Not five years ago.

Wallace sits at the bar after his shift, right where the Ellingtons sat earlier, and sips his drink. Wallace was born in Kalamazoo, Michigan; and ended up in Greenville, South Carolina, in his early teens; and moved to Columbia, South Carolina, after high school because he played in a band and Columbia seemed like a bigger deal. There he teamed up with Robinson, and they opened a bar called The Whig. That was a start. Then Wallace moved to Philadelphia and worked behind the bar at a Hilton and decided there had to be more. He didn’t want to open beers for the rest of his life. He missed the South. His parents had moved to Charlotte. So he decided to start a restaurant in the mountains and asked Robinson to join him.

They picked the building because it was an old bar, the B&D Bar, and it didn’t look like much, which was the point. They put up a neon Budweiser sign in the corner. Only the middle of it is still lit, and it looks like it says, “dive,” and if you didn’t know any better, you’d think someone did that on purpose.

Wallace moved here in July 2007. He opened The Admiral in December, back when West Asheville was Worst Asheville. He didn’t know anybody. Customers came. The ones that came back became his friends.

And now those friends have a beef sometimes with The Admiral because it exists somewhere between hangout and destination — the place the locals call theirs and the place The New York Times calls a gastro-dive. Wallace needs the local support, but he needs the tourists to pay the power bill and keep the beer cold. The tourists get the tables that book up days in advance. The people who really know The Admiral get the bar stools that open up whenever someone gets up. And then at 10, the whole thing changes.

Men pick up the tables and chairs, and put them out on the sidewalk. The hipsters file in. Whitney Shroyer, skinny and bespectacled, starts pulling out boxes of vinyl records, their grooves waiting to unleash crackling ’50s and ’60s rockabilly and soul. Women in sweaters and boots drink red wine and listen to Jerry Lee Lewis. Some guy stomps his feet to James Brown.

A month after the place opened, Wallace asked Shroyer to be the DJ for the dance party on Fridays and Saturdays, and he’s had no reason to stop. A radio station near New York City broadcasts the music live.

Laura Ivey stands at the bar. She’s in her early 30s, with blond hair and a face out of a ’40s movie. She lives about a mile away from The Admiral. She has dinner at the bar almost every Thursday. Sometimes it’s the flank steak. Sometimes the arugula salad. Sometimes the steak tartare with local Swannanoa beef. Dinner can be very touristy, she says. The bar is where you want to sit.

“It’s my bar,” she says, and she turns back to her friends.

Wallace asks the guys at the grill and behind the bar if they’re all right and heads out the door. By 11:15, the floor is full, and “Suzie Q” is playing. Dinner is over. The dance floor is open. The boss is gone. The Ellingtons have had their fill and Wallace has his dive and Ivey has her Dark ‘n’ Stormy and all of them are right at home.