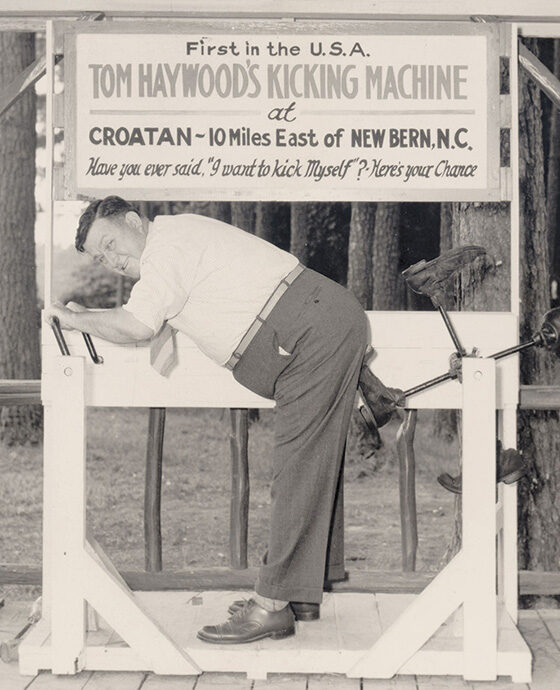 Craven County resident Tom Haywood established himself as North Carolina’s esteemed rear admiral of self-punishment, responsible for more butt-kickings than anyone else in state history.

In 1937, Haywood invented the country’s first self-kicking machine, a torturous-looking contraption he devised for occasions when he found himself grumbling, “Grrr, I could just kick myself.”

A simple hand crank activated the device’s rotating feet — four steel rods attached to a main axle, the end of each rod fitted with a shoe. Turning the crank gave users a good swift kick in the pants — multiple, actually — for as long as he or she kept cranking.

Haywood and handyman Wilber Herring built the machine just for fun, and when friends heard about it, they tried it, too. The goofy gadget became so popular that Haywood put it in front of his country store on U.S. Highway 70, where it became an unlikely roadside tourist attraction. Actress Lucille Ball allowed her derriere to be kicked, as did a few of our state governors. Even President Harry Truman paid the device a visit.

In fact, Haywood’s invention booted so many behinds over the years that the machine had to be rebuilt and the shoes replaced several times over until the contraption was finally retired in the mid-1980s. Replicas have been built, but the original now resides at the North Carolina Museum of History in Raleigh.

Which prompts us to ask: Does a self-kicking machine really belong in a museum? You bet your bottom.