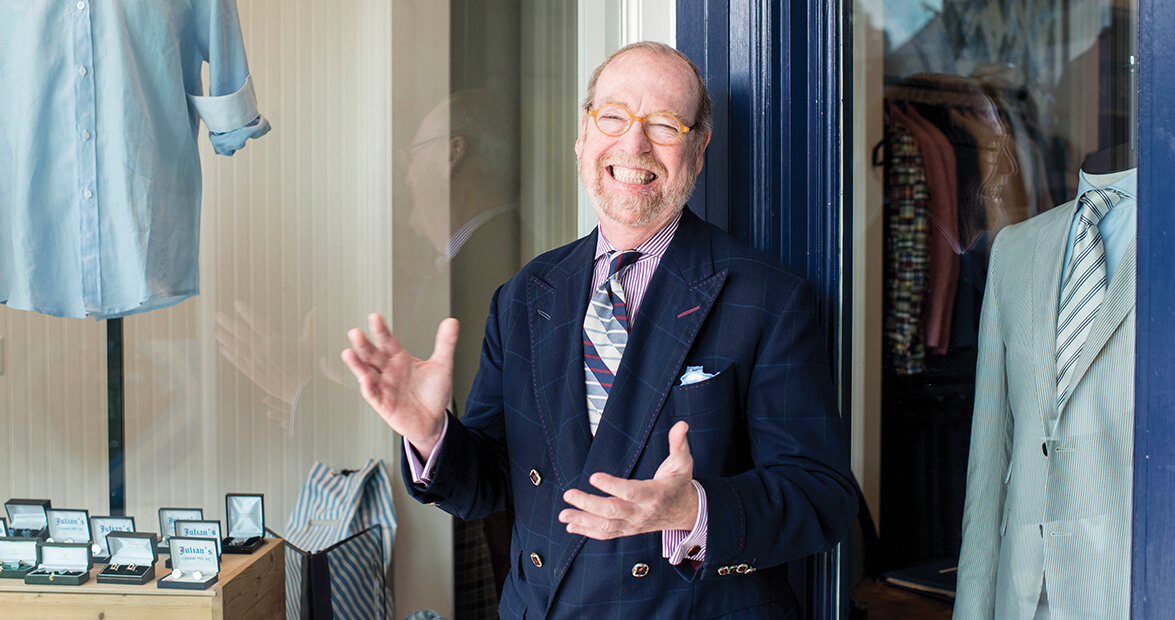 Dipsea, his Yorkshire terrier, nestles into a cashmere sweater. A regular customer walks into Julian’s, and the owner, Alexander Julian, slips away to greet her. Julian begins promoting some of his current sales on sport coats, then points an accusing finger at Dipsea and wraps up his pitch by saying, “With every three jackets, you get one dog!”

Julian has strategically arranged our interview at the tie table in the back so that he can keep a salesman’s watch over his entire store. He warns me that his father once taught him that business always comes first (read: Our interview comes second). Another customer enters, recognizes the internationally famous designer, and asks if it would be possible to take a photograph with him. Without missing a beat, Julian replies, “I’m willing to risk my reputation if you are.” The gentleman leaves with a photo. And a pair of cuff links.

Eventually, Julian returns to the interview. “A lot of people recognize me in the store,” he says. “My wife, Meagan, says in reference to big fish in a small pond, that I’m a whale in a goldfish bowl around here.”

After a 40-year journey around the world, with more twists and turns than his celebrated Carolina blue argyle, Alexander Julian has recently moved himself and his business headquarters back to Chapel Hill so that Alex Julian can finally be back home. 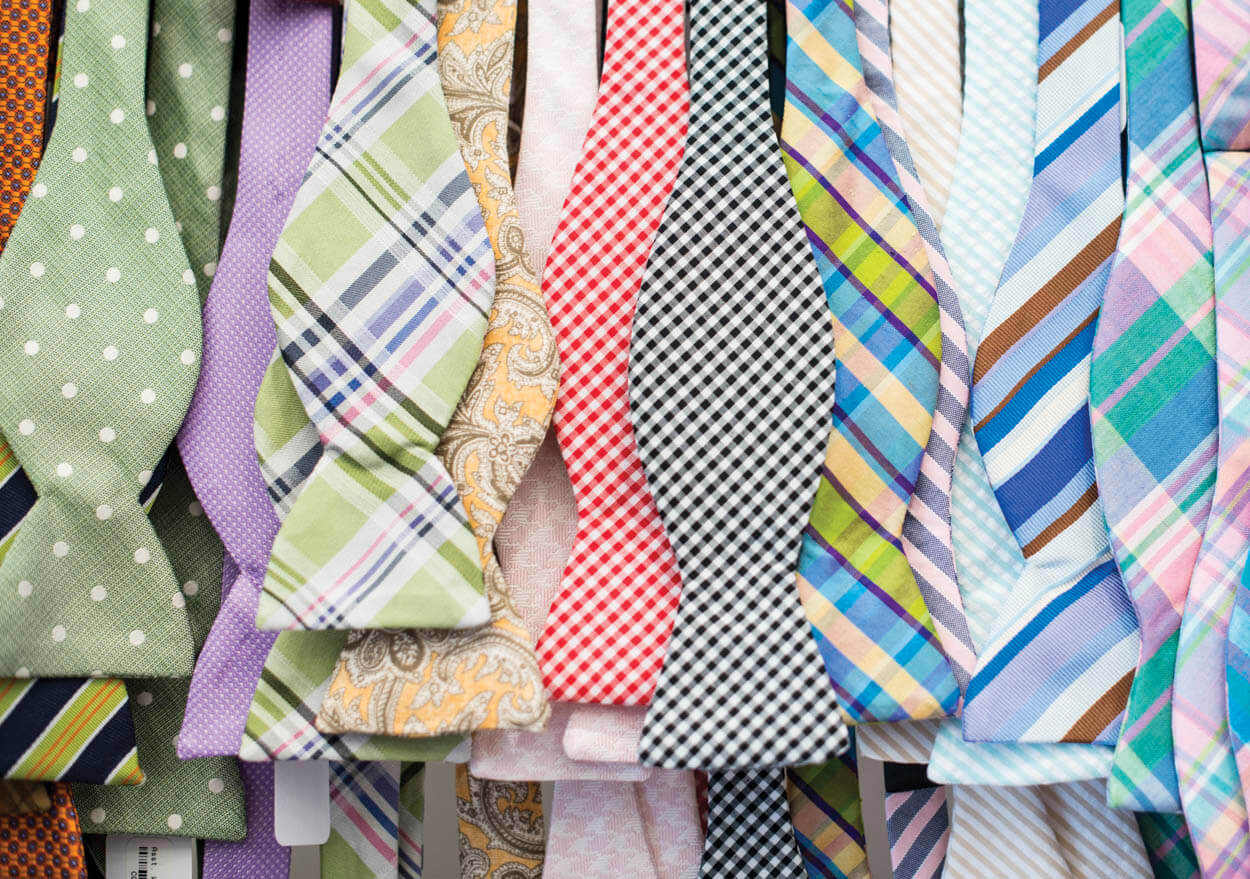 He was born in Chapel Hill in 1948, just Alexander Julian. No middle name, he says, because his parents couldn’t afford one. Everybody called him Alex, except for his mother when he regularly misbehaved. He grew up just south of downtown, in a tiny house that his father, Maurice, who opened Julian’s in 1942, called “the crackerbox.” Among young Julian’s best friends growing up was a kid he called Jimmy T. The pair hung out together, fishing, acting in junior PlayMakers productions, and performing piano recitals. (In the late ’60s, Julian recalls running into his buddy James Taylor sitting on a rock wall along Franklin Street, penning the lyrics to Carolina in My Mind.)

“Alex was always cool, colorful, and a bit of a rebel,” says University of North Carolina at Chapel Hill professor Bland Simpson, who first met Julian in the seventh grade. “His personality fit his hometown perfectly.”

Many of Julian’s favorite childhood memories involve sports. At age 12, he was the bat boy for the UNC freshman baseball team, and he attended Carolina basketball games at Woollen Gymnasium, where he snuck beneath the bleachers to peek up women’s skirts. He counts among his biggest thrills UNC’s run to the 1957 NCAA championship. His favorite player on that team was center Joe Quigg, whom he met one day in Julian’s, when young Julian himself was barely taller than Quigg’s belt buckle.

It was inside his father’s store, located on Franklin Street just off the UNC campus, where Alex evolved into Alexander. That transformation began the day Movietone News filmed a story about legendary Tar Heel tailback Charlie “Choo Choo” Justice in  Julian’s, with baby Alex bouncing on Choo Choo’s knee. “My mother always said that’s where I got my love of the spotlight,” Julian says with his mischievous grin.

Working in the store as a teenager after school, Julian met the power brokers of Chapel Hill. Renowned UNC president and U.S. Senator Frank Porter Graham knew him by his first name, and Julian called UNC system president Bill Friday “Prez.” One day, in what Julian calls his “lightbulb moment,” Alex sought out Pete, the shop’s tailor, to fix the collar of his blue oxford-cloth shirt, which had been torn in a fight during a schoolyard football game.

“There was a yellow oxford in the corner, and I don’t know why I had the idea, but I asked Pete, ‘Could you take the collar off that yellow oxford and put it on my blue one?’ ” Julian recalls. “I wore it the next week, and the prettiest girl in school started a conversation with me about my shirt, and I think, subliminally, at that moment, I became hooked on fashion.”

Julian designed his first shirt at age 12, and his first sport coat at age 15. It came naturally. “I grew up watching my father create shoes, shirts, ties that nobody had ever seen before,” Julian says. “I was just emulating the master.”

He begged Maurice to allow him to open his own boutique, but was always rebuffed — until the summer of 1969, when his parents and sister departed for a month of summer vacation, leaving Julian in charge of Julian’s. The 21-year-old used the opportunity to let one of his father’s colleagues out of a lease across the street and create his own shop in that space.

“I opened my first store when I was 21 with my father’s money while he was out of town,” Julian says. “I’m not proud of that, but it certainly got the ball rolling.”

The new boutique was fittingly named Alexander’s Ambition. The business thrived in Chapel Hill until 1975, when Julian decided to move to the mecca of the fashion world, New York City, launching a design career that would expand to 107 different products, from clothes to furniture to topiary. Meanwhile, Alex would inherit Julian’s from his father, and his cloth would become the fabric of Chapel Hill.

“Alex, like his dad before him, has sold generations of Carolina alums their first suit,” says Holden Thorp, UNC’s former chancellor and class of ’86. “He set the fashion tone for an entire town. His style is an inseparable part of Chapel Hill’s identity.”

During his career, Julian has won five Coty Awards, the highest honor in the fashion industry, and at age 33 became the then youngest-ever inductee into the Fashion Hall of Fame. He’s been included on the International Best-Dressed list nine times, and is the only fashion designer to have won the Pinnacle Award for furniture design. But he finds none of these quite as mind-boggling as the day he got the call from an icon. 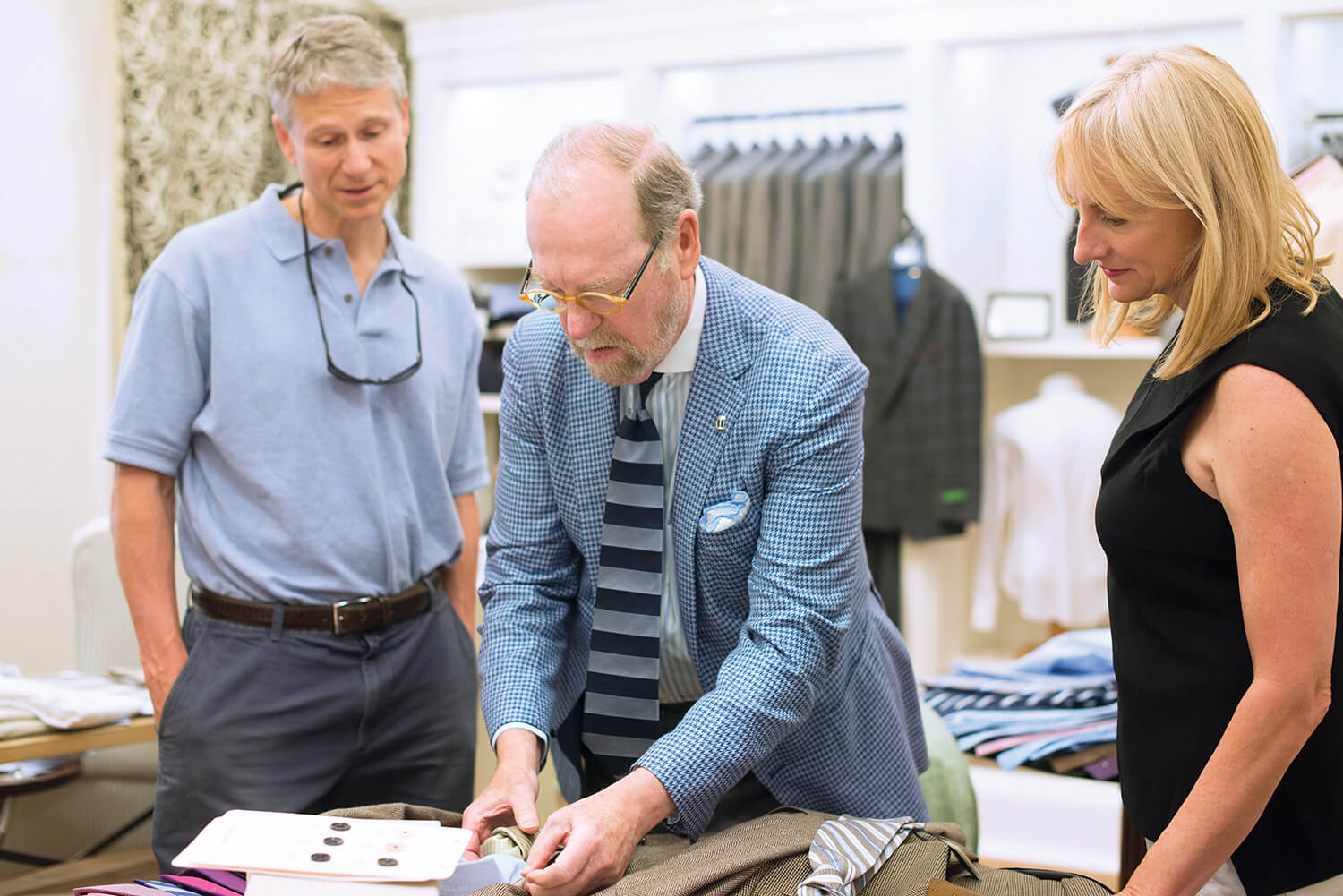 The phone rang, unexpectedly, while he was dressing for dinner in a London hotel room during the spring of 1990.

Alex, this is Dean Smith. I really like what you did with the design of the Charlotte Hornets uniforms, and I think it’s time for Carolina to change. I think you’re the man for the job.

“Well, I was born and raised in Chapel Hill, my dad was UNC class of ’38, I was class of ’69, my daughter was class of ’90, and if you cut me open, I bleed Carolina blue, so this was like receiving a phone call from God asking about new halos for the archangels,” Julian says. “I was thrilled, until I hung up and realized the weight of what I had just agreed to. If I screwed it up, I could never go home again.”

Julian had — radically — incorporated his flashy  signature color combination of teal and purple into his uniform design for the Charlotte Hornets in 1988. He knew that his UNC redesign would require more subtlety. He began the design process by taking a few jump shots while wearing one of UNC’s jerseys. It felt like sandpaper, so he developed a softer, more supple fabric for the Tar Heel uniforms. Then he changed the color. What? Alexander Julian changed Carolina blue? Actually, he restored it. In the primitive years of color television, UNC’s Carolina blue often appeared gray, so the school deepened and darkened its hue so that the uniforms would look bluer. Julian merely reinstated UNC’s original Carolina blue.

He created warm-up jackets made of faded denim with copper basketballs as snaps and toyed with the idea of adding a collar and short sleeves to UNC’s jerseys. His signature touch would appear down the side panels of the jerseys. Julian initially drew up approximately 30 different potential designs.

Then, during the 1991 NCAA basketball tournament, CBS broadcaster Pat O’Brien asked Julian if the network could film a story about him redesigning UNC’s uniforms. Julian allowed a camera to pan over the options.

Three days later, Julian received another phone call from an anxious Coach Smith, who said that several of Tar Heel basketball’s most prominent financial boosters had seen the story and had all weighed in on the choice. Naturally, they all preferred different designs. Not wishing to upset any of the donors, Julian had to find a solution. Who could weigh in on the decision, he wondered, whom all UNC fans could rally behind?

“Michael loved the argyle,” Julian says. “Guess what happened? When M.J. liked it, suddenly all voices were united.” 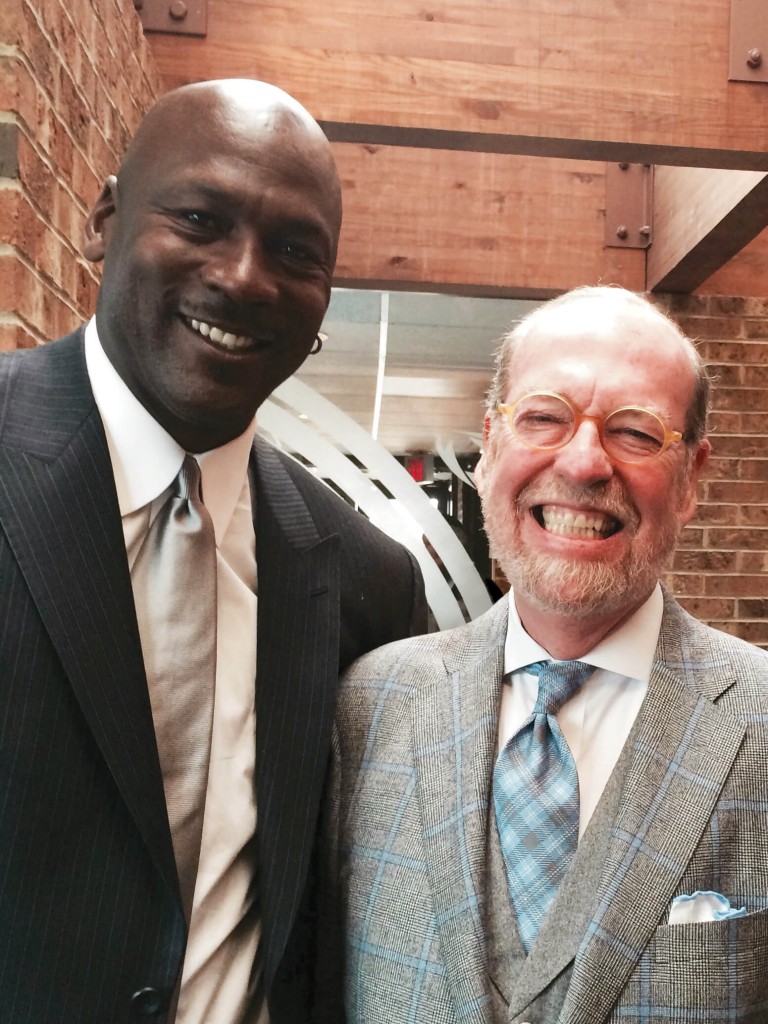 Julian agonized over the uniform redesign for so long that he missed the deadline for the first season, and UNC didn’t begin sporting the argyle until the 1991-’92 season. “Many people think I did the argyle because if you draw a Four Corners play, it looked like that, and some think I did it because of the strong Scotch-Irish heritage of North Carolina,” Julian says. “The truth is, I did it because it was timeless, it was classy, and I thought it personified Carolina cool.”

In April, UNC announced that Julian’s argyle design would appear on uniforms for all Tar Heel sports.

Julian remained closely affiliated with the UNC basketball program. During the Dean Smith Center celebration, the day after the Tar Heels won the 2005 national title, UNC coach Roy Williams began his remarks by saying, “Ladies and gentlemen, I owe it all to my lucky Alexander Julian suit and tie.” Julian stood for an ovation from the crowd.

There’s Alexander Julian with that signature grin, positioned beside Dean Smith. Next to Smith is former Chapel Hill mayor and civil rights leader Howard Lee. Above are Bill “Prez” Friday, Andy Griffith, and James Taylor. At Spanky’s, a restaurant just a few paces down the Franklin Street sidewalk from Julian’s, caricatures of Michael Jordan, Charles Kuralt, and President James Polk hang on another wall, among dozens of Chapel Hill luminaries featured.

“Chapel Hill is the only place where Michael Jordan, James Taylor, and Alexander Julian could appear in the same sentence, and it’s a great honor to be included here among so many of my heroes,” Julian says. “One of the things that I love about the placement of my caricature is that, decades ago, this very spot was the counter of Sloan’s Drug Store, where these cool guys Slick and Moose would serve us milkshakes after school.”

Staring at his caricature, he pauses for a moment to savor the coincidence. After all these years, Alexander Julian and Alex Julian are both right back where they belong.

This story appeared in print as “Alexander The Great.”