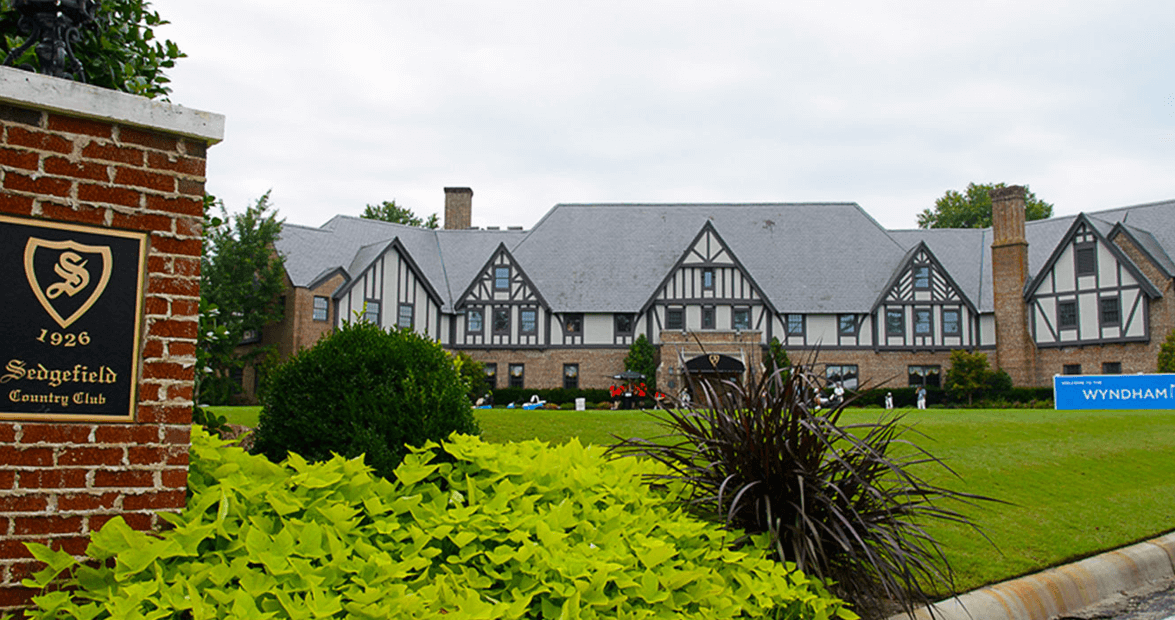 The crowd, chin-up, starts looking for any place where they might be able to see Tiger Woods.

Brooks and Thacker freak out.

Both men are down from Danville, Virginia, for the first time, watching the Wyndham Championship. Both are middle-aged. They are unabashedly excited.

Tiger Woods glances down at his yardage book.

“He’s tall, but not too tall,” says Tim Davis of Greensboro, who says the last time he was here at the Wyndham, he saw Sam Snead walking off the green. It’s been a while. “Hopefully, he’ll win,” he says of Tiger. “He’d be kinda obligated to come back next year.”

At 7:50 a.m., the starter calls Tiger’s name. He hits last. The air is cool, but already humid. The sky is gray. Tiger Woods takes two practice swings. This moment, a Thursday at 10 a.m., is the best time to be a Tiger fan, because he has not done anything yet. He is merely the Tiger of Potential. The Tiger who could still win. Lately, he has not been the Tiger who actually wins. He missed the cut at the PGA Championship last week. He missed the cut at the U.S. Open. He missed the cut at the British Open. At this point, he would have to win the Wyndham to qualify for the FedExCup playoffs that start next weekend. Hence, Tiger Woods is in Greensboro at a tournament he has skipped every year since he turned pro in 1996. It’s nothing personal. Plenty of golfers take this week off, since it falls right after golf’s last major of the year. If you’re here, there’s a good chance you need to win. Tiger needs to win.

His first shot hits a cart path and a tree and lands in the rough on the left-hand side.

Tiger’s second shot lands short and left of the green, and the crowd swarms, pushing up against the ropes. There is — you can feel it — a moment where people are starting to think, Oh man, he’s not going to do it. It’s going to be a long day. Then Woods pulls out a wedge, and flops a shot right into the cup from 18 yards out.

Pandemonium. Two men slap each other’s hands and hold on, vigorously shaking. Another man, at least five rows back, is giddy as he loudly exclaims: “I didn’t see s—!”

Tiger Woods has changed the whole landscape at the Sedgefield Country Club, a hilly and well-manicured Donald Ross course with long grass, longleaf pines, and a stately Tudor-style clubhouse. He committed to the Wyndham just before the deadline last Friday. The tournament sold 48,000 extra tickets. The media center more than doubled in size to accommodate reporters, photographers, and broadcasters who all want to talk about Tiger.

To see Tiger, you have to move like a tiger. You have to be fast on your feet, bobbing and weaving through slower patrons, always thinking of your next move. On 11, when Tiger’s chip shot does not make it to the top tier of the green, a hunk of crowd moves on to the next hole before he makes his bogey. Smart move. 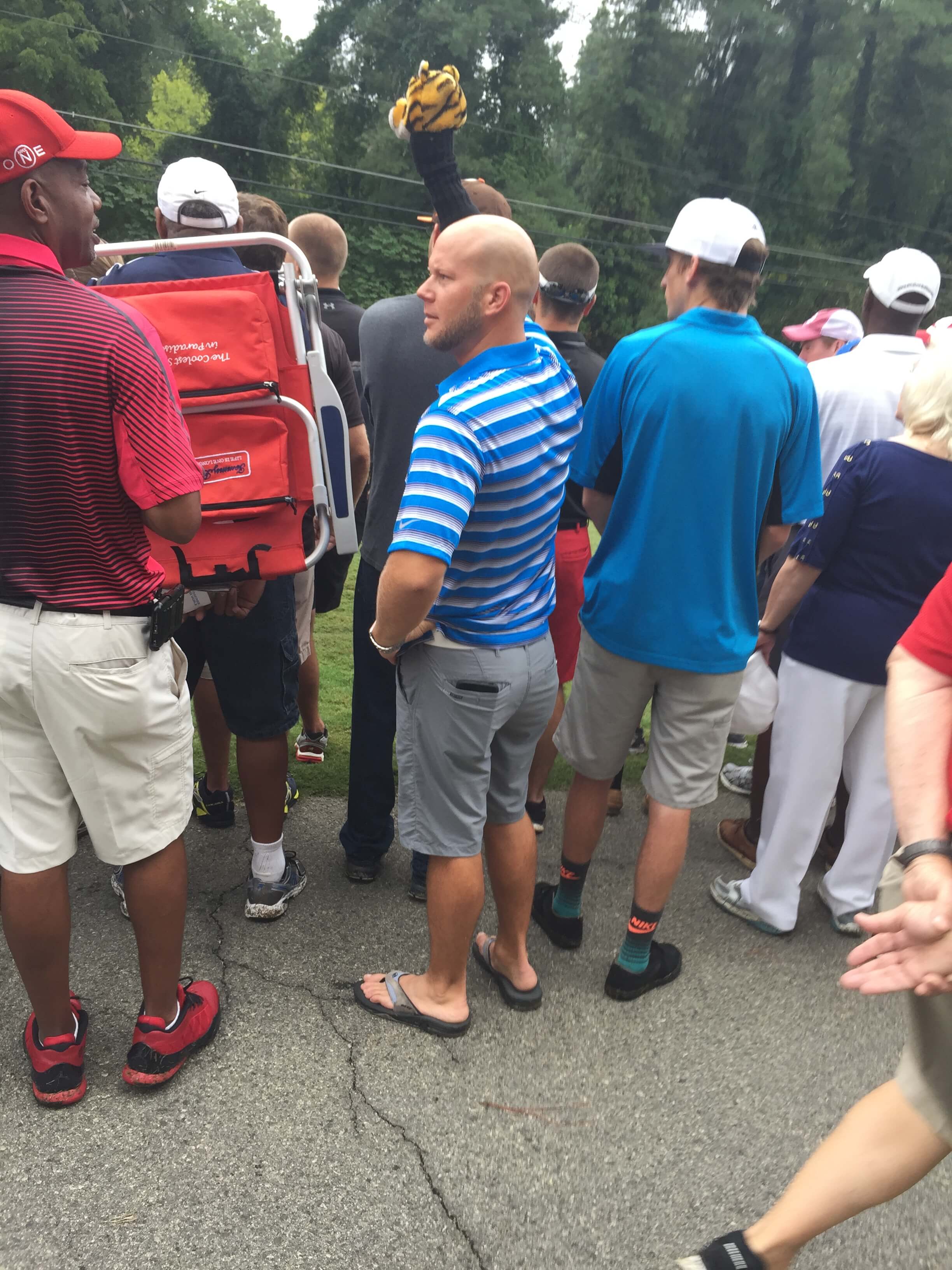 On 12, a man with a tiger club head cover, similar to the one Tiger has on his driver, lets a friend borrow it, and that friend puts it on his hand and holds it above his head for a solid three minutes as a show of solidarity.

Tiger putts. “Get in the hole!” someone yells.

“Turn turn turn!” someone else yells. The shot does not turn. Par.

People run up a mulched embankment full of rose bushes to get a good view of the next hole. They scramble across muddy ditches. The throng starts to build.

“Can I get on your shoulders?” asks 5-year-old Noah Gilmer to his grandfather, Earlie Johnson, who hoists him up.

“Can you see?” Earlie asks.

“Let me know if he knocks it in,” Earlie says. And so Noah sees Tiger drain an easy five-footer for a birdie.

Earlie, 65, retired last year. He walks between holes hand-in-hand with Noah and his other grandson, Boston, 3. He’s been coming to the tournament for 15 years. “Never seen it like this before,” he says, which is what everybody here says. “This is awesome.”

Earlie says he likes to watch golf with Noah. Once, they sat on the couch together at home and watched Tiger putt on TV.

“He’s human like the rest of us,” Earlie told him.

Tiger won’t be human for long. He pars 14 and birdies 15, and the crowd begins to murmur, but it is as if Tiger Woods is playing alone. He is notoriously locked-in when he golfs. He makes no eye contact with fans. The guy with the Tiger club head cover screams at him: “I love you, Tiger!” and it really feels, even with his woman right there with him, that he means it. Tiger smirks a little, maybe. It’s hard to tell if that’s even a real smirk or just a twitch.

“Hey, Tiger!” shouts a middle-aged woman in glasses and a leopard-print shirt. Tiger does not respond.

When Tiger drops a 10-foot putt on the 18th hole to go 3-under-par, things change. Fans are no longer coming to see the man who once was. The Tiger Woods they used to know is coming to life right before their very eyes.

It should be said at this point that there is some very good golf going on elsewhere on the course. William McGirt shot an 8-under-par 62, which is one stroke off the course record at Sedgefield, but he had the misfortune of teeing off at 7 a.m., so only the earliest of early birds got to see his round. In the group that follows Tiger, Martin Kaymer will finish 6-under-par and Bill Haas 5-under-par. But Tiger’s round is what people are talking about.

“I was right there,” he replies. “I went bananas.” Instant street cred.

On the back nine, the oppressive heat lets off a little, although the humidity is still heavy. It had been so soupy out here that Tiger had already sweat through his hat after just two holes. The sky is still gray, and a few drops of rain fall, although it’s nothing like the showers that moved through the night before. The greens are nice and soggy, and that’s allowing some players to take dead aim at the pin. Their shots will hold.

On the first hole (his 10th), from 172 yards out, Tiger puts a shot within six feet of the pin, knocks in the birdie, and suddenly the world beyond Greensboro takes notice. SportsCenter puts up a graphic in the corner of the screen announcing that Tiger is 4-under. It stays up through several segments. Up until this point, Tiger still has his force field up, not acknowledging fans who have now been screaming “Tiger!” and “Get in the hole!” for more than four hours now. He finally breaks on the fourth hole, when he misreads a putt from about 12 feet out and is already walking toward the hole because he’s sure he missed it. And then it goes in. All Tiger can do is shrug and smile.

The poor marshals. They yell “Hold, please!” in a losing battle to keep the crowd from shifting and distracting the players. (Just for perspective, Tiger is playing with Hideki Matsuyama and Brooks Koepka, too.) There are constant reminders from frustrated volunteers in Wyndham polos that there are to be no videos or pictures taken with cell phones. One remarks that he can’t wait to handle just a few stragglers who want to cross the fairway at a crosswalk. When Tiger goes past, a thousand people go past, too.

Tiger birdies the fifth hole, and the talk in the crowd turns to the course record, 62. With three birdies on the last three holes, it could happen, which seemed so far-fetched at 7:50 a.m. as to have been laughable. Course record? Have you seen Tiger play this year?

The crowd, at this time, has swelled, and it seems like everyone who has shown up at Sedgefield is now following Tiger. They’re 10 deep in some places. Later, despite his demeanor, Tiger tells a reporter that he’s actually been feeding off the crowd. “It was electric, especially early,” he’ll say, with a grin spreading across his face. “It’s a nice small ballpark. People are very intimate and very close. It’s fun.”

But back to nine, where 16-year-old Angus Isley of Durham has scaled a five-foot brick wall in front of the clubhouse to see over the throng of people. Tiger’s shot has landed short of the green, and Angus, who’s been following him all day, does not want to see this round end with a bogey. “I like it,” he says. “I haven’t seen him like this in a while.” Tiger needs to make par to shoot 64, which would be his best round in two years. But even if he misses, he’s in it. Still in contention. Judging by the crowd, Greensboro is in it, too. People who paid good money to get in for one day are now scheming about ways to come back on Sunday, because Tiger Woods, a stranger here, has them believing.

Tiger has an 11-foot putt to save par.

“Get in the hole!” someone yells. And it drops.