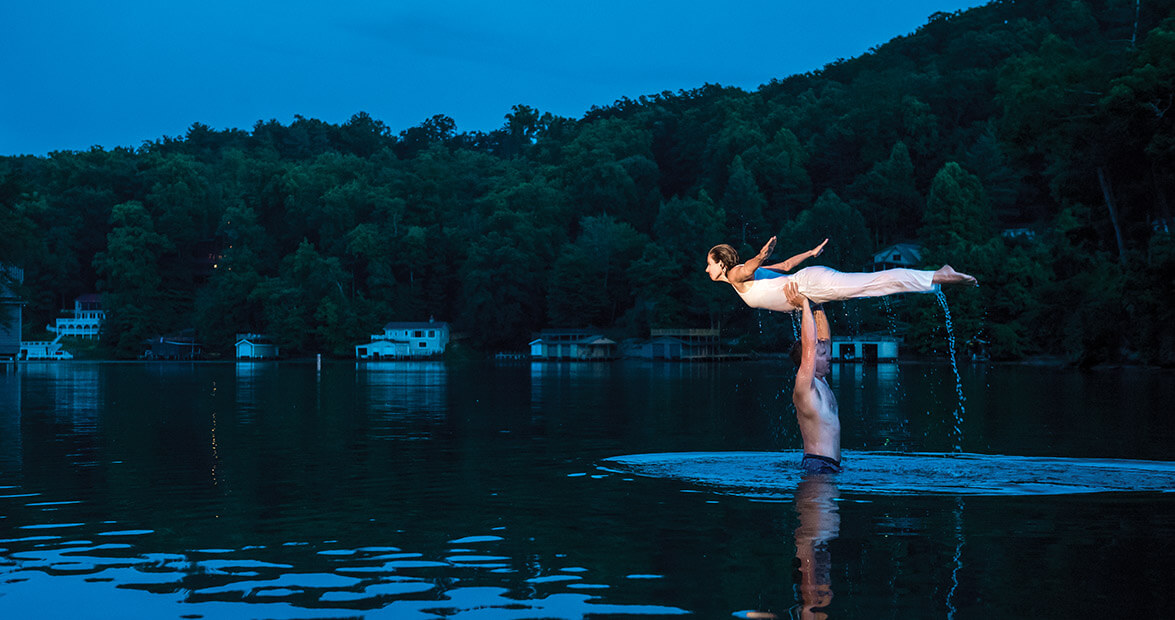 You catch glimpses, now and then, from the twists and curves of the winding road that sometimes does, and sometimes doesn’t, outline Lake Lure’s contours: a deep green liquid below, a quicksilver slice of shine. Is that the cove? That one? Was it there, that —

And then it’s gone, obscured by steep, tree- and rhododendron-covered slopes. Boxy boathouses hug the hills and are snug against the water’s surface. You can motor or paddle or ski out to the center of the lake, this irregular cross with 27 miles of shoreline, but the appeal — the lure itself — lies in the many coves, the fingers of stillness and “no-wake” zones. It lies, too, in a summertime story where a shy teenager grew up. 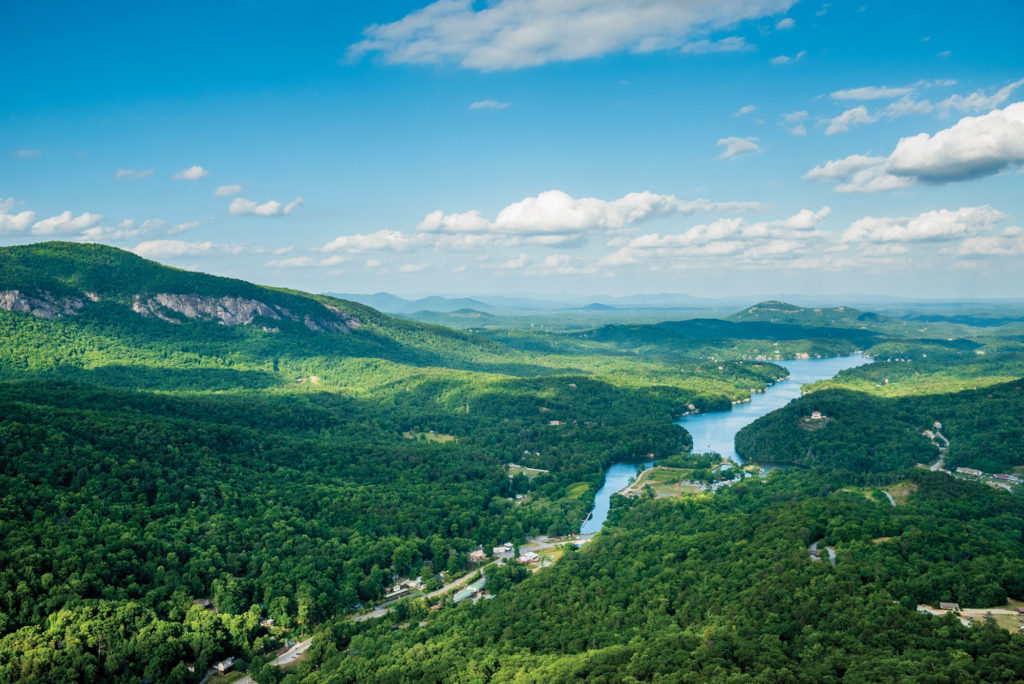 Come on in, the water’s fine. So is the breathtaking view from high in Chimney Rock State Park. photograph by Emily Chaplin

Perhaps it’s the drowned town beneath the sunlit ripples — buildings of an abandoned mining town — that adds to an expectant sense of magic. Surely the lake’s history does. From atop Chimney Rock in the early 1900s, Lucius Morse envisioned a high-end resort built around the gorge below. Then came the dam in 1925, and the two year’s time it took the Rocky Broad River to cover the town and fill the landscape. Then came the Depression, leaving the green coves and cool waters of Lake Lure — named by Morse’s wife, Elizabeth — lapping at the foothills of the Blue Ridge. The mountains’ gently rounded, billion-year old-heights are visible wherever you choose to gaze.

Pontoons glide across the lake, carrying revelers or sightseers or some of the town’s mere 1,193 residents, who arrange “tie-ups” on the water, for cocktails or supper. At dusk, red and green bow and stern lights glow as they cruise silently toward shore, and those on land, on cottage porches or boathouse rooftops, watch night fall over the 720 acres of water that, since Dirty Dancing, have moved beyond special to famed. Because Baby grew up on our Lake Lure. She learned lessons about social class and trust and romance. She learned to dance. To let go of fears and inhibitions. The cool, deep-green waters of Lake Lure will do that to you.

Learning to dance isn’t so different, after all, from learning to water ski. The floor is hard, the lake is chilly. Beside an instructor’s, or bound to wooden slabs, your feet feel ungainly and large. You look into your partner’s eyes, or seek the eyes of the person at the steering wheel. Both of them hold your immediate future in their hands.

The record ticks; the boat idles and putts. The towrope slowly unspools. An open palm at your back, or a questioning thumbs-up from the boat. Both silently ask, Ready? Then the hard yank of arms in their sockets, the uncontrollably veering skis, the suck at your stomach, the drag at your guts. Until, finally, that rising and lifting, that straightening, triumphant stretch — and you’re away again and unencumbered, flying over the glistening surface of the lake.

His grandparents’ dock will do nicely as a launchpad for Jackson Yelton (in air) and pal Adler Knight. At Lake Lure, “A pontoon is more important than a ski boat,” says resident Kenneth Tanner, a grandson of an original investor/developer, for “tie-up” gatherings on the water. 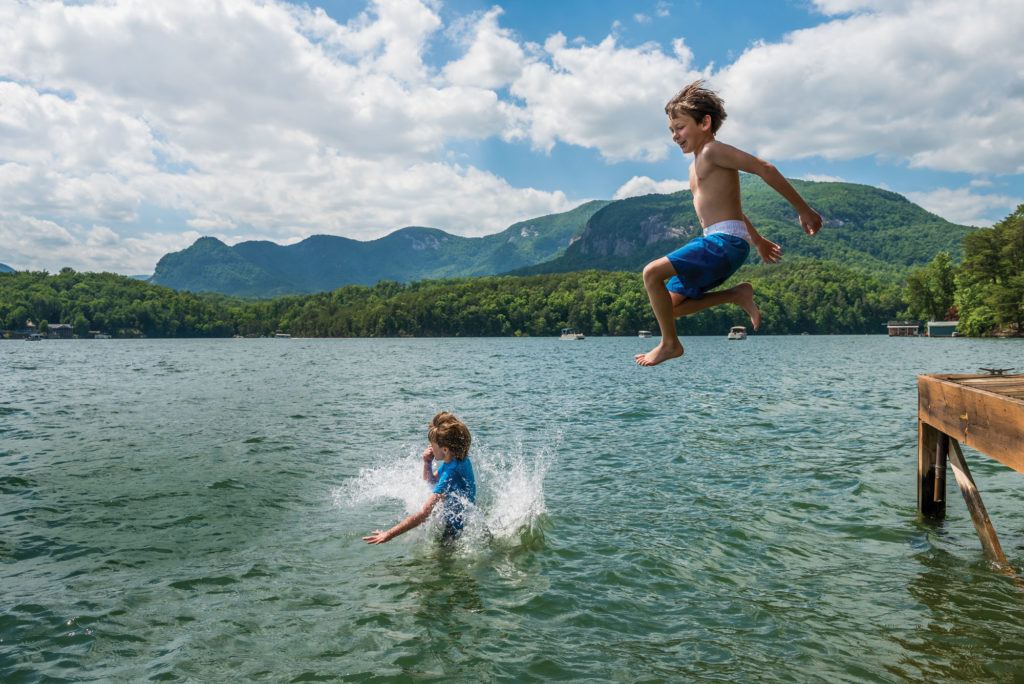 A bathtub with a bay window? All the better for lazing and gazing from the Lodge on Lake Lure. Below, the cinnamon rolls at Medina’s Village Bistro in Chimney Rock are rightly famous. 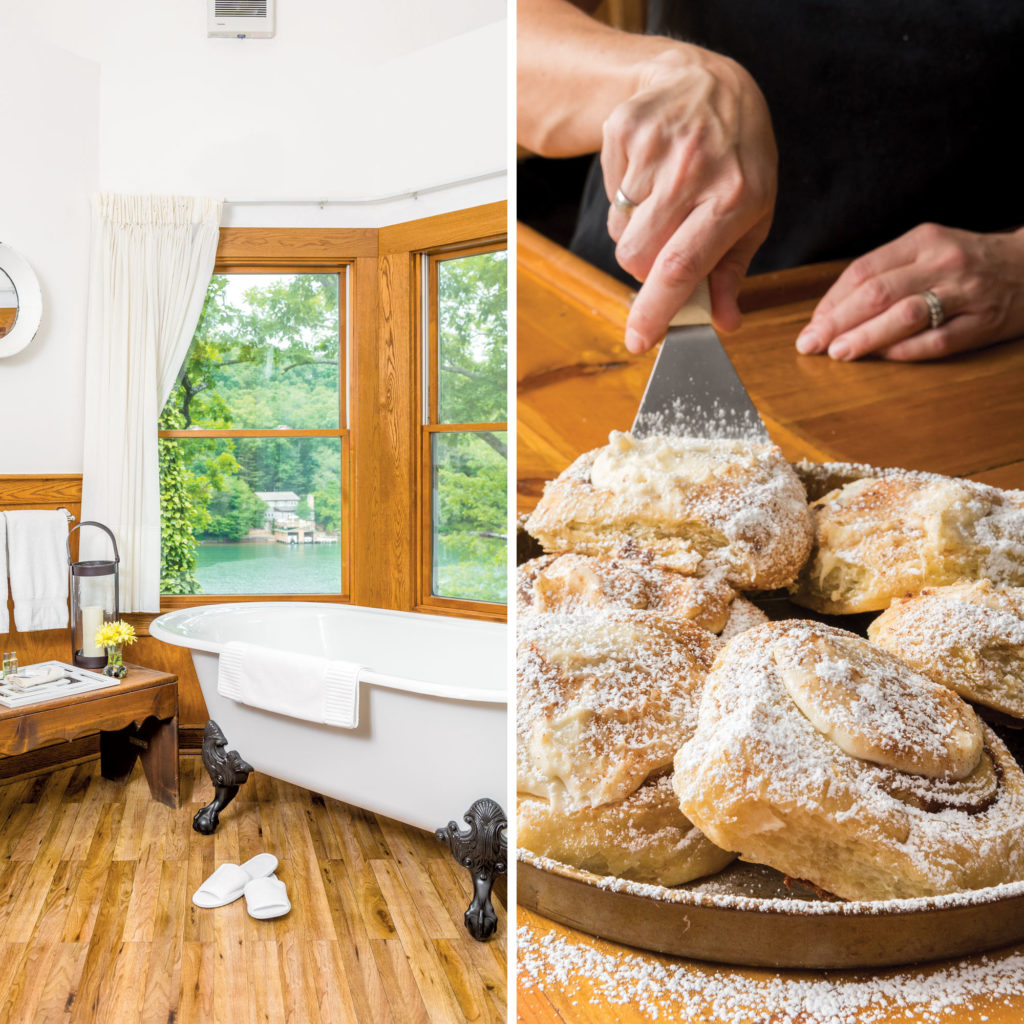 The first boathouse on the lake was constructed in 1922, before water even began to rise behind the dam. 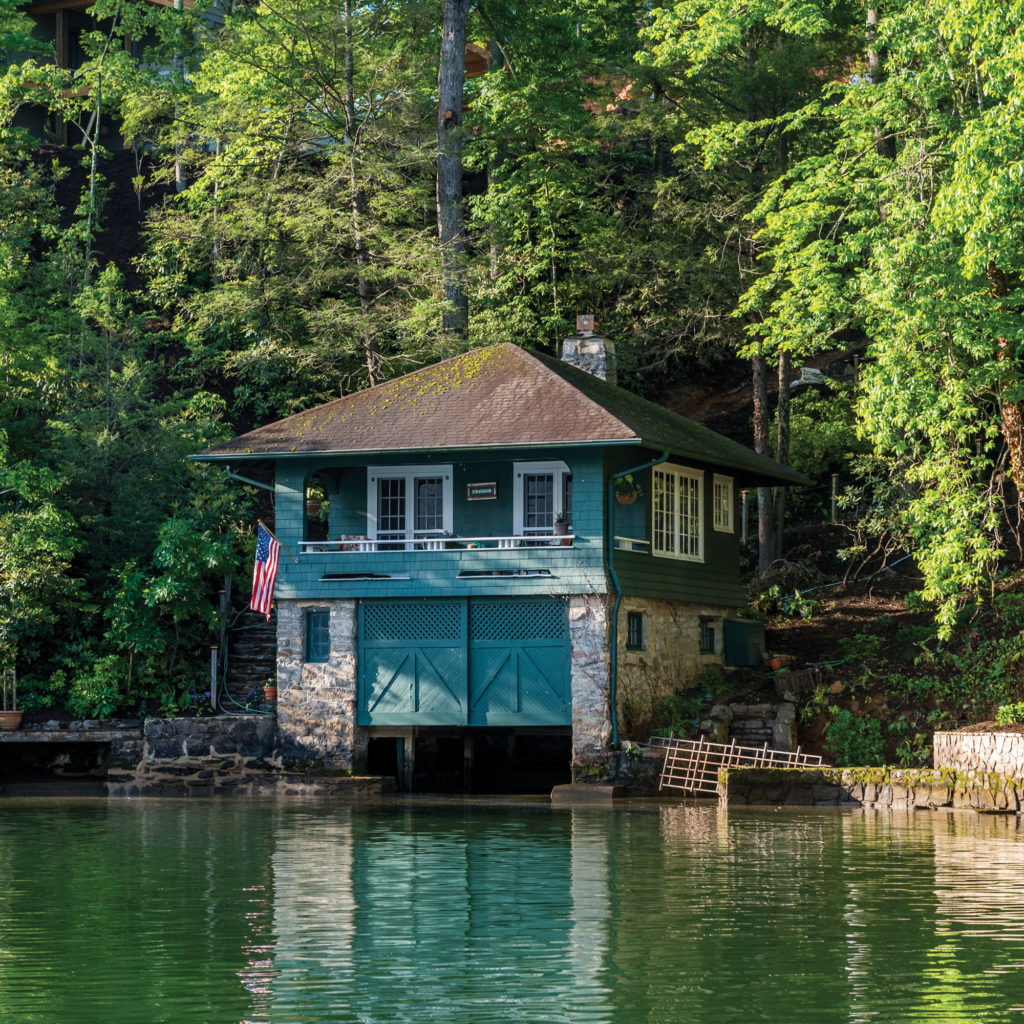 Thanks to community volunteers, a “functionally obsolete” 1925 bridge has become the Lake Lure Flowering Bridge, a walkway of beautiful blossoms and sweet scents. 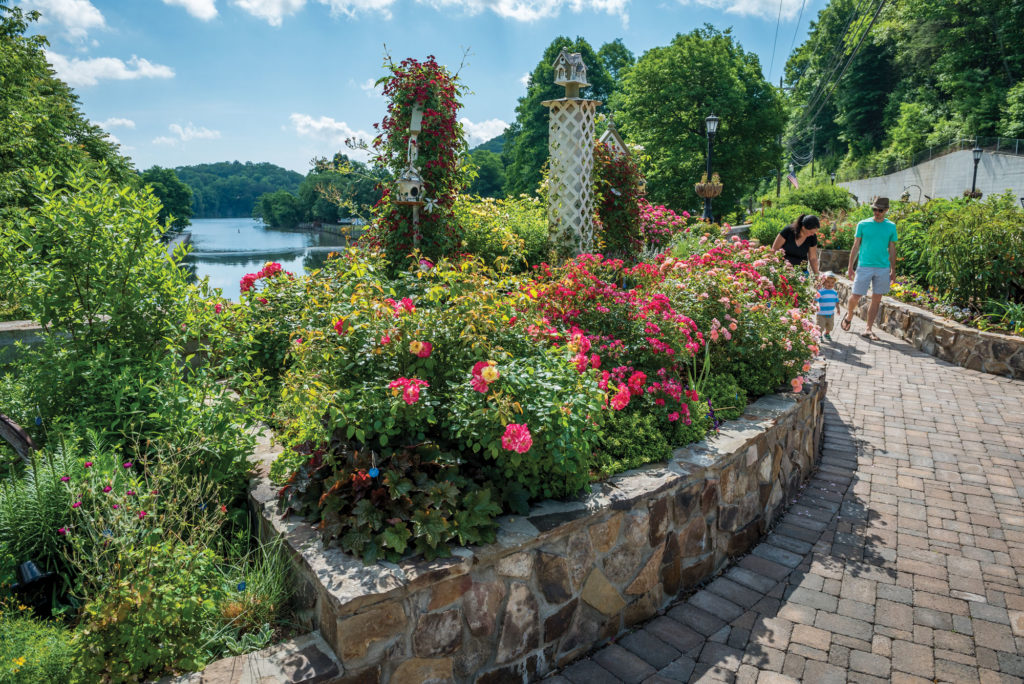 Fishing guide and owner of The Granddaddy Fly Fishing Experience, Michael Yelton casts a pretty curve, showcasing his skills over the mountain-ringed waters — up to 104 feet deep in some places — of Lake Lure. 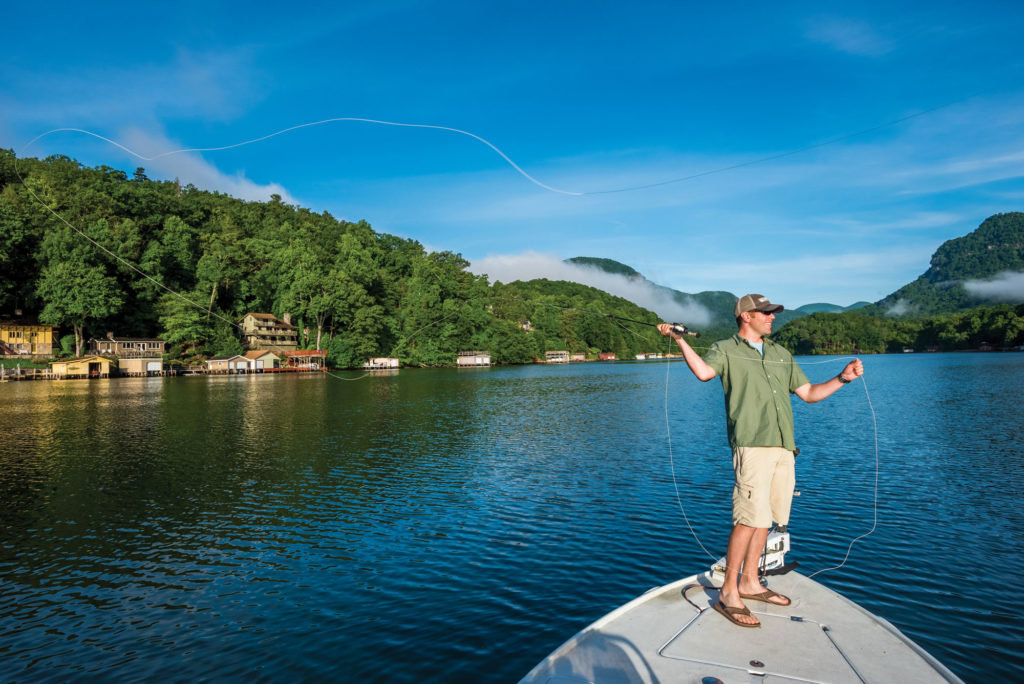 The only “beach” at Lake Lure, open to the public, stretches before the historic stucco Lake Lure Inn and Spa, first open in 1927. And not only historic, but famous: cast members of  Dirty Dancing stayed here. 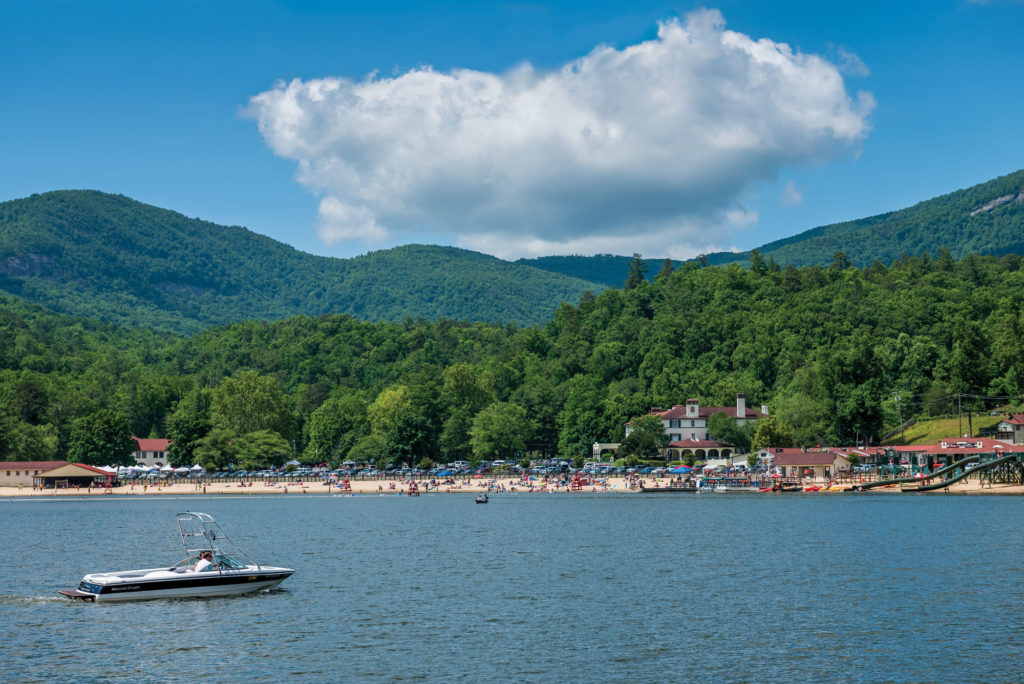 No whitecaps to worry about here. Whinnie, a Cavalier King Charles spaniel, hitches a late-day boat ride to Firefly Cove. 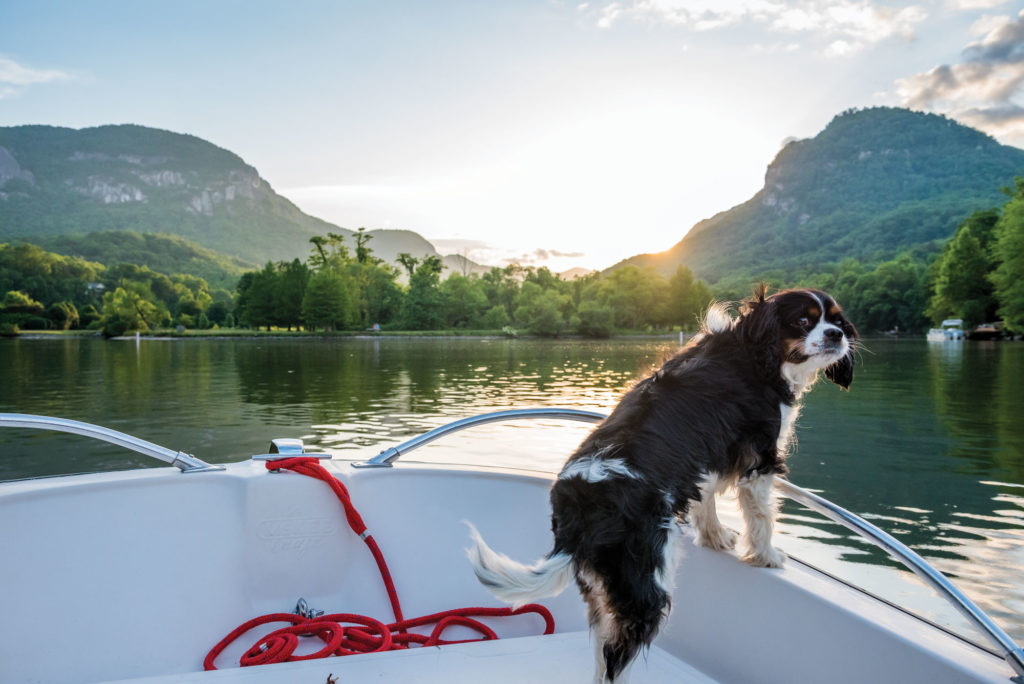 Pull up a porch rocker at Tootsie’s Cabin, one of the rentals at Pine Gables Log Cabins. 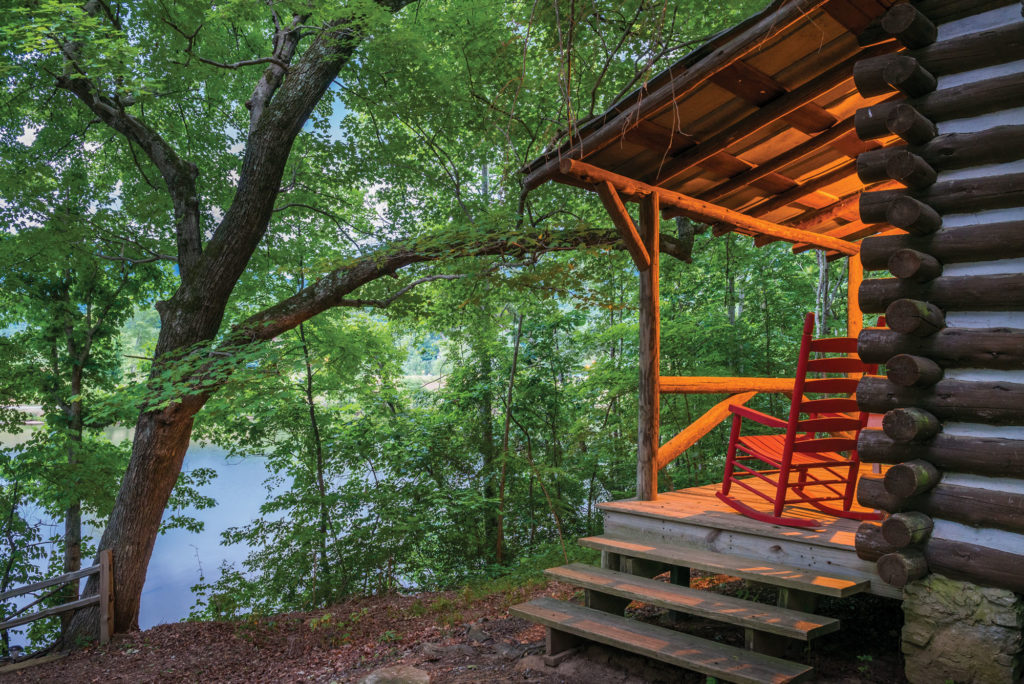 Step right. Step left. Lift your arms, and look me in the eyes. Hear the music on the record player. Above all, listen to the lake. Have the time of your life.