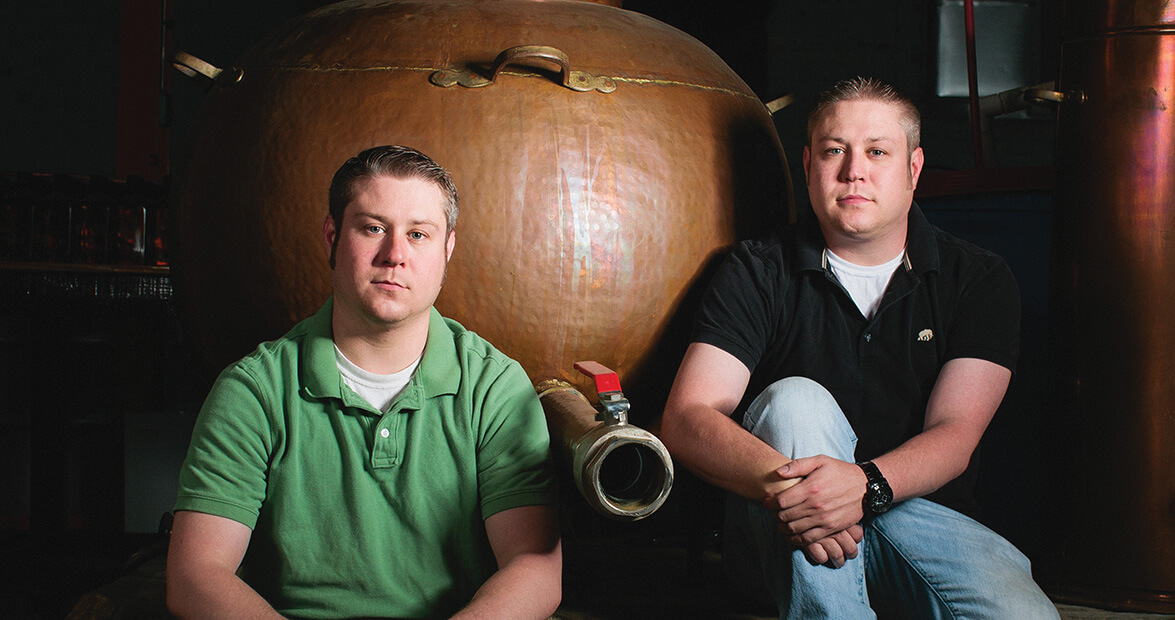 Nothing else tastes like gin. Its distinctive, piney flavor comes from the juniper berries that must be predominant in the liquor for it to be labeled and sold as gin. It’s complex, iconic, and one of the most widely consumed spirits in the world.

So attempting to craft a new, completely original gin is a bold move.

In Kings Mountain, twin brothers Alex and Charlie Mauney were ready for something bold. They’d been experimenting with making vodka and whiskey as a hobby, and while trying to concoct something unusual and memorable, they lost interest. You could even say they became dispirited. The brothers decided it was time to take their explorations one step further — to making gin.

And so, in a region historically known for prohibiting sales of alcohol, the Mauneys started Southern Artisan Spirits, one of the first legal distilleries in North Carolina, and set out to create a gin that would taste like no other.

A typical gin contains about a half-dozen botanical ingredients. The brothers began blending and tasting different combinations of herbs and spices: spearmint; frankincense; the exotically named “grains of paradise,” which are seeds from a West African plant in the ginger family. They researched recipes that dated back to the 1700s, when the Dutch called the strong, medicinal concoction Jenever. After a hundred or so tries, the pair arrived at a winning combination of 11 botanicals they believed would make a gin people would buy.

“Good luck with that,” Alex recalls people telling him.

“People thought we were crazy,” Charlie remembers. “They didn’t take it seriously.”

Despite the naysayers, in 2010, the Mauneys built a distillery in a 3,000-square-foot section of their family’s old hosiery mill, where a large sign from decades past still reads “Mauney Cotton Co., Inc.” (They’ve since expanded to 13,000 square feet.)

The brothers named their product “Cardinal Gin” in honor of North Carolina’s state bird. They recruited friends to help them, along with their parents, Jim and Anne, to run the bottle-filling machines and attach labels by hand. Production was underway.

The result was warm and floral, peppery with notes of citrus and mint. Reviewers responded favorably. The gin was mixable, in a Martini, a Negroni, or in the cocktail that seems to embody summer: a gin and tonic.

Still, it’s wise to keep expectations in check when fledglings try to soar with eagles. Only the most audacious amateur would send a new, small-batch product to compete against internationally known brands. Yet Cardinal won a Taste Test Award from Cooking Light and tied with gin giant Beefeater at the Beverage Testing Institute in 2011; won two bronze medals at the International Wine and Spirit competition in London; and earned a double gold medal at the 2012 San Francisco World Spirits Competition, which required all 30 judges to vote for it unanimously — twice. It was the only American gin to place in the contest.

Although there’s no use trying to find your way to the source — the Mauneys explain wryly that the building is deliberately inconspicuous, to dissuade potentially overzealous appreciators — Cardinal Gin is available at retail stores in 10 states, with more planned. The brothers recently shipped a freight container overseas to Italy, where the product was then distributed to Germany, Austria, Switzerland, France, Belgium, and other European countries. They sold about 36,000 bottles last year — roughly 98 bottles every day — each of those bottles having been washed and labeled by hand in Kings Mountain.

“Liquor is ‘new’ in Kings Mountain,” Alex says, and explains that in North Carolina, it’s mostly in larger cities where bartenders serve Cardinal. But for the home mixologist, the Mauney twins offer a tip for the perfect summer gin and tonic: It’s 50/50, equal parts of each. And that’s a proven winner.

Amy Rogers is an award-winning writer based in Charlotte, and a frequent commentator on NPR station WFAE.