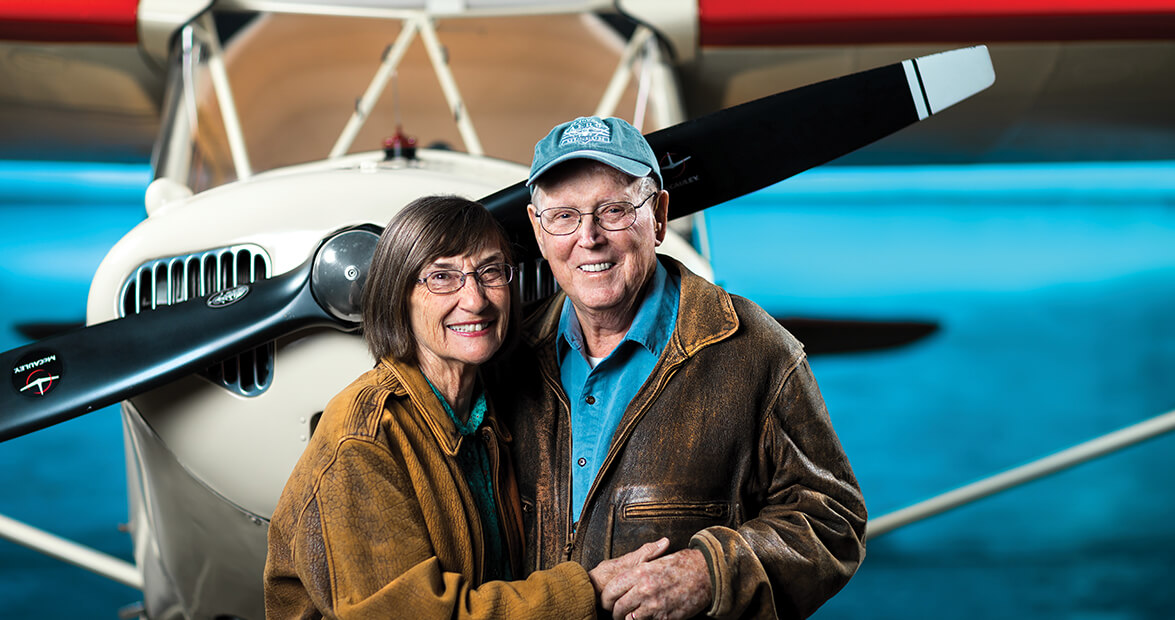 Rain was leaking in through the roof of Jim and Karen Reynolds’s two-seater airplane. Waves of bad weather were sweeping through the United States as they touched down in Kelso, Washington, just after starting their cross-country journey back to North Carolina. It was March, and snow was still being blasted off the mountains with dynamite to prevent avalanches. The weather had already delayed their departure from Port Townsend by three or four days. With a faulty roof, a wet airplane, and strong wind and rain, Jim and Karen were stranded, at least for a few days. They planned to cross the Rocky Mountains to the north, taking the most direct route home.

Thankfully, a local bush pilot named David Cummings came to the rescue, offering up his hangar and a space heater to dry out the plane. They chatted about Jim and Karen’s plan to cross the Rockies, and David lent them his car, since he would be gone for the next three days. It was a godsend.

But before he left, David gave Jim and Karen crucial advice about crossing the northern Rockies: “You can’t do that,” he said. “I’ve been up there in big twin-engine airplanes, and sometimes the wind currents could flip that airplane sideways.

“I am here to save your life.”

Jim and Karen were driving down the road north of Charlotte when they got the good news: The stage 3 melanoma that Jim had been diagnosed with had all been removed during the first of his two scheduled surgeries ­­­— he was cancer-free. He looked at Karen and said, “Well, I’ve got a new lease on life. Let’s do something really neat.”

What he had in mind was a 1946 Taylorcraft single-engine airplane that was for sale on the West Coast. The Port Townsend Aero Museum in Washington was getting rid of it in order to buy a newer plane for flight training. The price was right. Their 50th anniversary was just around the corner. “Why don’t we buy this plane?” Jim said. “And the best part is, we’ll have to fly it across the entire country to bring it home.” Karen looked back at him. “OK,” she said. “Let’s do it.”

They sent a check for the airplane to the museum, sight-unseen except for a picture, “something you should never do,” Jim says, laughing. But the plane was in good condition — 800 pounds of wood spars and fabric-covered, steel-tube fuselage. It’s cranked by hand, meaning Jim has to give the propeller a good spin to get the engine going.

They bought a one-way ticket to Washington and wrote their Last Will & Testament. They had a going-away party, and avoided telling Karen’s 96-year-old dad, so he wouldn’t worry. But before they left, Jim had to undergo the second surgery in his cancer treatment. This time, the results were not good. The surgeon had been wrong.

The cancer had spread to the back of Jim’s head.

David suggested that Jim and Karen fly south to Salt Lake City and cross the Rockies from there. The weather was warm when they landed, but the higher temperature meant that the airplane wouldn’t climb as easily. They were already fighting an uphill battle: The 7,000-foot elevation was a challenge for the plane’s modest 65-horsepower engine, and they needed to fly even higher to get over the Rockies.

“Karen has never, never been afraid to do anything,” Jim says.

“I don’t have fear!” Karen adds. But she did this time.

“There were tears in her eyes,” Jim says. “She said, ‘I have a very bad feeling about this.’”

She refused to fly that day. “At that point, I had no idea how we were going to get home,” Jim says. “We were almost to the point where we said, ‘Let’s just leave the airplane; we’ll just get an airline ticket and go home.’”

But once again, human generosity gave their flight new hope. A flight service weatherman had made the trip over the Rockies before, and he suggested they fly even farther south, to Albuquerque. There, they picked up the Interstate 40 corridor and followed the road east.

“We had no survival gear in here. We determined we were not going to go down.”

Their first stop was in Moriarty, New Mexico, where bad weather continued to plague them. They knew that they wouldn’t be able to fly the next day. They managed to find some hangar space for the plane, and watched as 70-mile-per-hour winds knocked down power lines, tore off roof shingles, and sent tumbleweeds flying across the highway. “If that airplane had been tied outside, the wind probably would have broken the ropes on it,” Jim says.

Eventually, the storm passed, and Jim and Karen took off once more. They raced cars along the highway, zigzagged through valleys between rugged mountain peaks, and flew over waterfalls and rushing rivers. “In the valleys, the mountain ranges would be on either side of us,” Jim says. “You’d look out the wing, and you couldn’t see the sky because you were looking at ground on either side.”

They took turns flying: Jim did takeoffs and landings, and Karen flew and navigated once they got in the air, using a battery-powered tablet and a dozen aeronautical maps as backup. They used highways, rivers, airports, and geographical features as landmarks. “In this territory, the highway’s the only place that you can put down if you have an engine problem,” Jim says. They had mailed a box of survival gear to Port Townsend before their trip for that very reason, but when they saw the size of the plane, they had to send it all back. “We had no survival gear in here. We determined we were not going to go down,” Jim says, laughing.

As they flew, Jim and Karen took in the landscape in greater detail than could ever be seen from an airliner. “The beauty that you see when you’re sitting 1,000 or 1,500 feet off the ground — it looks like somebody’s got a Cinerama movie of all this beauty around you coming underneath your nose,” Jim says. “Sometimes you can see 50 miles, and these puffy white clouds – oh, it is just astounding.”

On May 3, 2017, after 53 days, 3,500 miles, 19 stops, and 193 gallons of gas, Jim and Karen finally flew past the Wright Brothers National Memorial and out over the Atlantic Ocean, completing their “Sea to Shining Sea” trip. “I thought, man, we’ve done it,” Jim says. As they drove away from the Wilkes County Airport where the plane is now housed, Jim said to Karen, “You know, I think that’s the craziest, most difficult thing we’ve ever done in our lives, and I wouldn’t have missed it for the world.”

When they got home, it was time to come clean to Karen’s 96-year-old dad. They hadn’t told him that they were flying an airplane back from the West Coast so he wouldn’t worry, but now that it was over, it was time to tell him what they had done.

“I knew that,” he said, grinning. “The only reason you’d go that far west is to get an airplane.” He and many other family members and friends had been following Jim and Karen’s journey on The Weather Channel, watching the storms that they were facing and praying for them.

“We made the trip a matter of prayer along the way,” Jim says. “There were times when I couldn’t figure out how we were going to do the next day. And I prayed for guidance, I prayed for safety, and then I’d go about the flight plan and trust the Lord that we could fly the airplane, and it always worked out.”

Something that Karen’s father said after the trip really stuck with Jim. He said, “This happened so that something good would come out of something bad.” At first, Jim didn’t understand what he meant. But then it dawned on him: He was talking about the cancer.

“There were times when I couldn’t figure out how we were going to do the next day.”

“I think that God planned this whole trip out so that Karen and I would be put in a position where we would have to trust God to get us through this thing,” Jim says. “I think the Lord was saying ‘I can get you through this trip, which is technically difficult, and I can get you through the cancer.’” Even though he’s still living with cancer, he’s optimistic. “I don’t know if the cancer can spread and I will die sooner than later. But as long as he holds my hand and guides me through it, I’m OK with whatever happens.”

Throughout the course of Jim and Karen’s trip, kind and generous people came into their lives when they needed them most — letting them stay in their hangars, giving them rides to and from the airport, and giving them life-saving advice. “Everything clicked into place to make this possible,” Jim says.

“We put a lot of faith in God,” Karen says. “He helped us; he kept us safe. He really did. And that’s the most important part of the whole thing, is his care. Sending the right people at the right time, the right place. He’s the best pilot.”