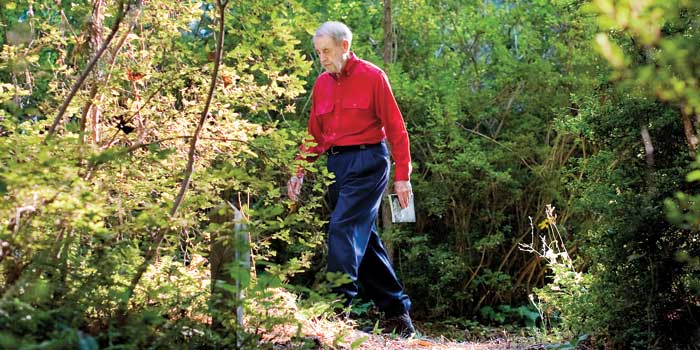 About 50 years ago, Allen de Hart stepped out the back door of his brick ranch in Louisburg and wandered into the thick woods behind his backyard. There he discovered a speckled blanket of blossoms spread across the ground.

He and his wife, Flora, marveled at the rich plant life just a few steps from their new home, but a simple, white flower sprouting from the cracks in a granite boulder drew their gaze the longest.

It was shaped like a plane’s propeller, and when they investigated, they learned that it only grows in 10 North Carolina counties — an uncommon bloom in their own backyard.

Then they wondered: What else is out there? What other beauties poke up through the Franklin County dirt, waiting for someone to notice?

Today, at age 85, Allen de Hart has labeled more than 300 wild plants across his property, and he keeps finding new ones. Tiny signs identify each one along with its tongue-twister Latin name. Walking past the signs feels like stepping through the pages of a plant guide. Wild ginger. Trout lily. Puttyroot orchid. Yellow trillium. But the diversity is only one interesting characteristic of his land, now known as the De Hart Botanical Gardens.

This Virginia-born history professor, who started hiking in the Blue Ridge Mountains at age 5, who witnessed the Appalachian Trail’s construction, who logged tens of thousands of miles in a pair of hiking boots, invites anybody who shares his love of wilderness to come tour his private property. Strangers are welcome to traipse over all 88 acres, as long as they sign the register, promise not to smoke, and leave their guns at home. He and Flora just want others to see what they see.

De Hart knows adventure doesn’t require distant travel. You don’t have to ride a donkey to the bottom of the Grand Canyon to qualify as a wanderer. You don’t need to stand on a summit of the Alps to see something that inspires you.
If you really want to explore, de Hart figures, you should start with the trail leading out your back door. And if you can’t find one, cut one there. (Story continues below the video.)

Trailmaker (from “Our State” on UNC-TV)

Produced by UNC-TV in partnership with Our State magazine, with generous support from BB&T. Segment originally aired on 2/4/2010.

Carving a garden out of the Franklin County woods, starting at his back door, is a natural thing to do for a man like de Hart. If you hike in North Carolina, Virginia, or West Virginia, you probably carry one of his 10 guidebooks — catalogs of trails detailed down to the last pinecone.

De Hart’s personal odometer registers more than 57,000 miles, far enough to circle the earth one and a half times. For most of those miles, he pushed a wheel that looks like a unicycle in front of him, counting the steps from start to finish.

He grew up in Patrick County, Virginia, in the path of the original Appalachian Trail. In the late 1930s, he volunteered to carry water to the men digging it out of the hillside. One day, he asked one of the workers where the long trail went, and the man rested on his shovel and shrugged. “I guess it goes all the way to heaven,” he said.

The idea of heaven lying within walking distance stuck in de Hart’s mind.

But for de Hart, the object of hiking isn’t to conquer trails, to plant a flag and brag that he’s been there and beaten the worst the mountains have to offer. He isn’t out to break any records. He wants to present the mountains and valleys to strangers, to act as their ambassador, rather than experience them all by himself. He wants them mapped and cataloged, placed in easy reach for any hiker to follow his path.

About 30 years ago, de Hart started writing North Carolina Hiking Trails with the idea of guiding people to every route that connects to the Appalachian Trail. Once he started hiking, he quickly realized how many great walks his book would omit, so he added every trail in the mountains.

Soon, even that task seemed shortsighted, so he threw in the Piedmont.

Decades later, de Hart founded Friends of the Mountains-to-Sea Trail with plans to one day connect the Smoky Mountains with the Outer Banks by a single path, a goal which is still in progress. Well into his 80s, de Hart spent his weekends organizing digs, cutting trails through the woods as he did as a child.

But all that time, wherever his boots took him, he kept slogging across his own land, noticing every detail, writing it all down.

Today, a sign not much bigger than a mailbox just catches your attention as you drive north from Raleigh on two-lane U.S. Highway 401.

It sneaks up on you. Nobody greets you in the parking lot. Just a gazebo with a registry full of names of visitors from towns such as Williamston, 80 miles away, who stumbled upon the place.

De Hart Botanical Gardens is the sort of place you drive past for years without pulling over to investigate; you just continue to wonder what it looks like down one of those trailheads visible from the highway. But if you finally stop, this stretch of rural road becomes a destination.

“We were just passing by and got curious,” says Annette Brantley of Zebulon. “Now we’ve gone there every Sunday for a month.”

Chances are, you’ll spend most of your walk alone.

You might see de Hart with a busload of children, explaining that kudzu is edible and pokeweed is poisonous. Or you might spot him leading a penitent lawbreaker through the trail to fulfill community-service requirements; de Hart directs him where to dig. Along the muddier parts of the trail, you see marks of mankind in the form of zigzag boot prints or a set of initials carved in a sycamore tree.

You trudge over dirt, rock, pine straw, grass, bamboo leaves, and a dozen wooden bridges. One of the trails leading to the lake overlook is flat and smooth enough to accommodate a wheelchair.

Maples. Sweet gums. Sumacs. Orange and pink leaves mix with deep green pine needles. Purple asters poke from the ground alongside white silverlings, which even de Hart struggled to identify.
“I finally found someone in Cary, someone in their parks, who knew what they were,” he says.

Allen and Flora de Hart started their collection in 1958, after they both took teaching jobs at nearby Louisburg College and bought what was once a four-acre cow pasture. By 1978, they had identified more than 300 species of plants, trees, shrubs, and mosses, including more than 20 species of ferns.

And as they gradually acquired more land, they kept finding more plants. The garden became a haven for plants they collected on their meanderings, including 22 large flame azaleas rescued from road construction in the Monongahela National Forest in West Virginia.

“All but two of 22 survived,” de Hart says. “Now they bloom two to three weeks earlier. They haven’t adjusted in all these years. They remember their upbringing.”

The various trails on the de Hart’s property add up to about three miles, and you can spend two or three hours nosing through them, smelling the herbs, listening to the stream trickle over the rocks as it tumbles from a small waterfall.

The scenery draws many visitors to the quiet of Franklin County from crowded north Raleigh, where the subdivisions are large enough to be their own cities. As they walk past the lake de Hart built and watch the turtles splash off the giant granite boulders, they’re thankful for de Hart’s generosity. Most people with acreage this special would be tempted to keep it to themselves.

When you walk through his woods, guided by the signs he posted himself, you begin to share de Hart’s curiosity, inheriting, if only for a few hours, his restless need to see what’s around the next bend.

Josh Shaffer is an award-winning writer who works for The News & Observer in Raleigh. Josh’s most recent story for Our State was “North Carolina’s High Road” (October 2011).