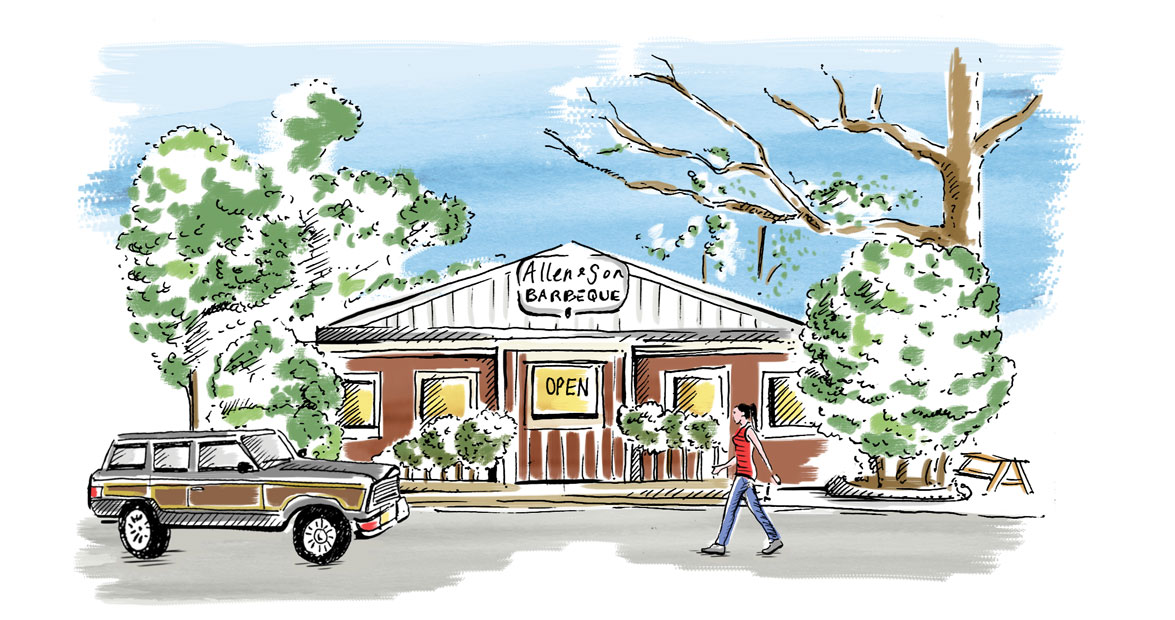 First, a confession: It took me 10 years to eat Allen & Son barbecue. As an observant but not that observant Jew, I didn’t really keep kosher, except for the part about avoiding pork. And so, after moving to Chapel Hill, on my occasional visits to the venerable barbecue joint on the northern fringes of town, I was the guy ordering the  chicken or the cheeseburger or the catfish. They were all perfectly delicious — especially when washed down with a liter of sweet tea and followed by a slice of coconut chess pie — but I can’t claim that they were what kept me coming back.

Rather, the appeal of the place was about everything other than the food. There was the trip there: about 15 minutes from downtown on a gradually narrowing road, past the cemetery with the seemingly permanent “LIMITED TIME BOGO FREE” sign by its entrance. There was the building itself: a tumbledown, cinder-block-and-wood-frame affair that always looked to be one heavy rainfall away from earning the label dilapidated. And, most important, there was what waited for you inside. Seated at wobbly tables covered with green-and-white checkerboard oilcloths, were a mixture of UNC professors and Duke Energy linemen, orthopedists done for the day after a morning of surgeries and landscapers on their lunch breaks — all of them surrounded by imposing pieces of antique farm equipment, hanging baskets of fake flowers, and a menagerie of taxidermy.

It was like a Cracker Barrel reimagined by David Lynch. Honestly, the chicken could have been dry, the sweet tea could have been cloying, and I’d still have made a point of going there.

Then, about six years ago, I concluded that refusing to eat pig is too onerous a form of self-denial, and I finally ordered a plate of the famous hickory slow-cooked pork shoulder. Ever since, I’ve been making up for lost time. 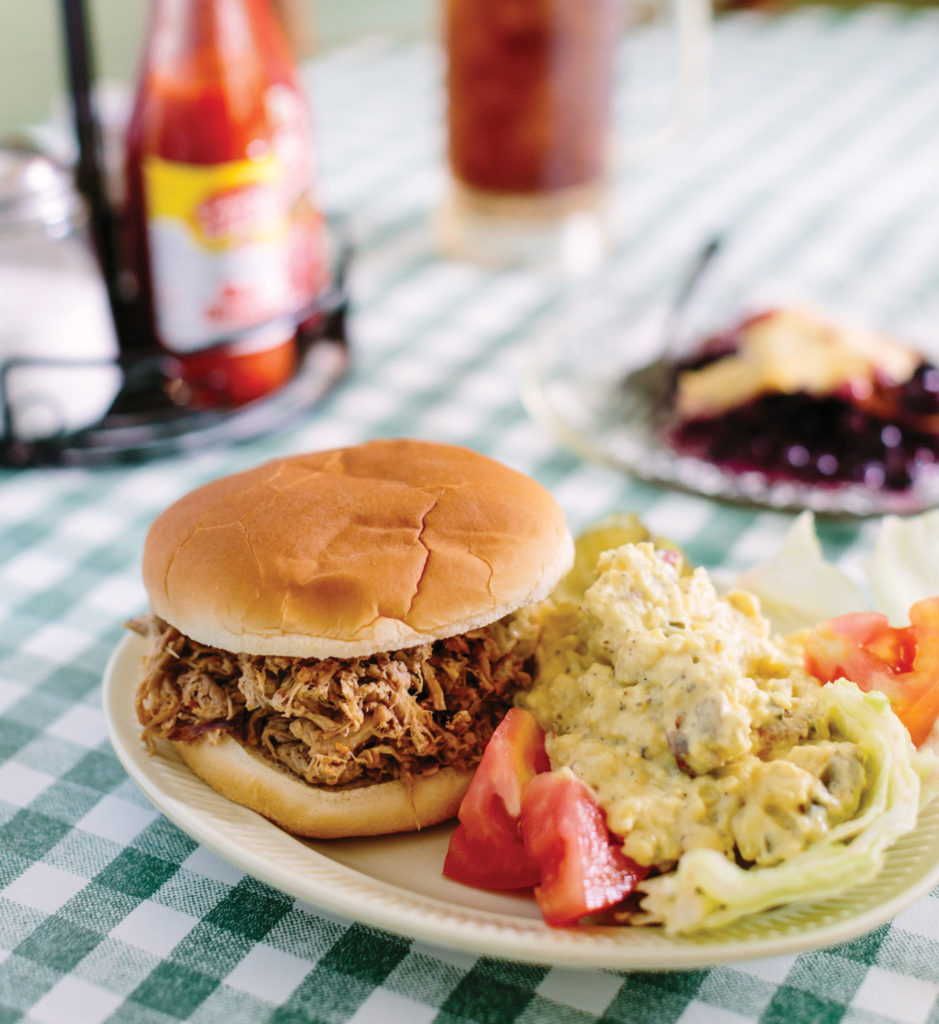 This hasn’t been easy. My wife, a North Carolina native no less, is not a big barbecue eater. Our children prefer the cheeseburgers at Al’s Burger Shack on Franklin Street. In order to get my Allen & Son fix, I’ve had to make it my go-to spot for lunch meetings. If a friend from the neighborhood wants to get lunch, I suggest Allen & Son. If a colleague from New York happens to be in town, I tell him to meet me at 12:30 by the train tracks out on Millhouse Road. Lately, though, I’ve liberated myself from even that convention: I don’t need companions, let alone an excuse. When I go to Allen & Son by myself, no one — save for the waitstaff and the kitchen — can judge me for ordering the extra-large barbecue plate and a slice of peanut butter pie, or, if I’ve had the good sense to go on a Friday, a bowl of banana pudding.

One day this spring, I arrived at the restaurant about eight hours earlier than usual. I wanted to see Keith Allen at work. It was 4:30 a.m., and the parking lot, not surprisingly, was empty. I went to look for Keith in an outbuilding behind the restaurant, but he wasn’t there. Instead, I found him inside, patiently rolling out a cobbler crust and then gently draping it over a sea of cherries. In addition to tending the barbecue pit, Keith bakes all of the restaurant’s cobblers and pies, makes the coleslaw and potato salad, mixes the hush puppy batter, and brews the sweet tea. The only dish Keith’s hands don’t touch is the ice cream. That’s made by his wife, Tammy, who started as a waitress here when she was 15 and has been on the floor for 30 years. 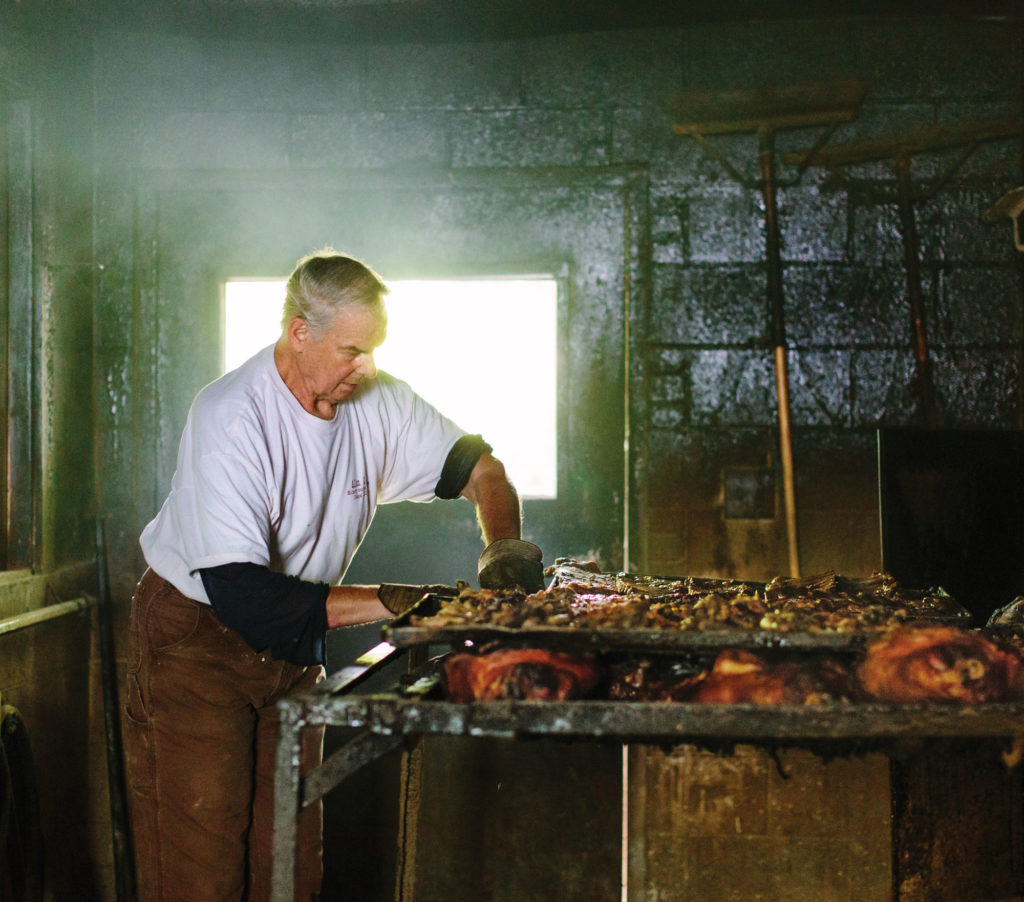 In 1971, when Keith was 19, he quit his butchering job at the A&P, sold his landscaping equipment, and borrowed $3,000 to open a restaurant. He gave it the same name as the one his father owned in Chatham County, where Keith worked the barbecue pit from the age of 10. Ever since, he’s gotten to his Allen & Son at 2:30 a.m. five days a week — splitting every piece of hickory, roasting every shoulder, chopping and seasoning every serving. “Nobody’s hands but mine touch my barbecue,” he likes to boast, “until the customer’s do.”

After sliding the cherry cobbler into the oven, Keith headed back out to the building that houses the pit. It reeked of hickory and pig, and was cluttered with axes, mauls, 13-inch cleavers, and other implements of destruction. A picture of his father, who died of a heart attack when Keith was 23, hung on a wall. Now 65, Keith still has a barrel chest and Popeye forearms, and as he shoveled coals into the oven and threw railroad ties onto the fire, it was easy to see why. Making barbecue, he explained, is more art than science. “You’re working with Mother Nature here,” he said. “Wind, rain, snow, wood, pork, and an idiot at 3 o’clock in the morning.”

It’s a routine few want to embrace anymore. Keith has no son, and his daughter is finishing her master’s degree in geospatial information science. So it’s likely that whenever he retires, Allen & Son will close its doors. “Someday this may be the sort of thing you only see at fairgrounds or museums,” he says, gesturing to the fire and the oven next to it, where 25 pork shoulders have been roasting for a couple of hours, with about eight hours more to go. Before opening Allen & Son, Keith had worked at a white-tablecloth restaurant in Southern Pines. “I could fix you lobster and steak and a salad in about 15 minutes,” he marveled. “Now it takes me 12 hours to make you a barbecue sandwich.” Twelve hours or 10 years, it’s worth the wait.