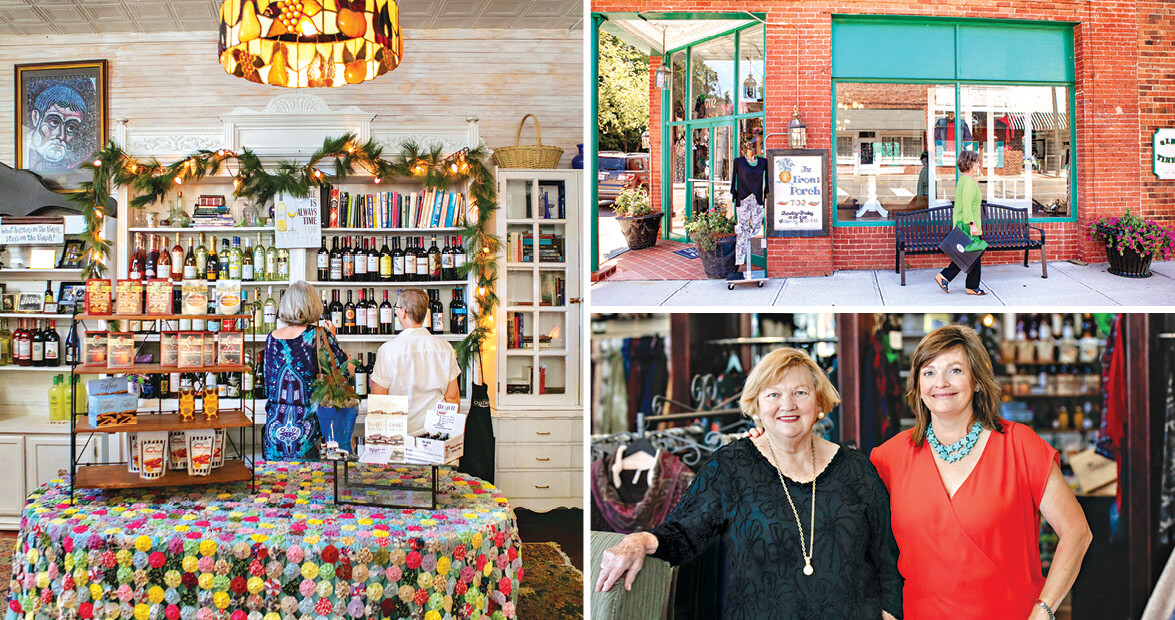 The Front Porch, basically, out of Gloria Hall’s car in 1980. When word of mouth brought shoppers knocking on her front door at all hours, looking for sweaters and jackets, she decided to set up a brick- and-mortar shop. Today, Gloria and her daughter, Mel (who, 30 years ago, told her mother, “I’ll help you for a little bit”), are still running The Front Porch, now in its third iteration in downtown Eden. They’re proud to be a part of a town that was also a product of threes: “Eden was created from the consolidation of three communities — Spray, Draper, and Leaksville — in 1967,” Mel says, “making it a unique town.” (Mel ought to know: Her husband, Neville Hall, is the mayor, and both she and her mother are natives of Eden.)

Women’s clothing and accessories still make up the majority of the inventory at The Front Porch, and in 2006, the store began selling wine and gourmet foods, making this a place to gather as well as shop. For many of the store’s loyal customers, who often drop by just to catch up on local happenings, the building itself is nostalgic. The local drugstore was once housed here — rings in the tile floor are evidence of the stools that stood in front of the lunch counter. And many of the vintage furnishings were “a gift with a story,” Gloria says, like the “yo-yo quilt” of pleated fabric rosettes — made partly from sheets from Fieldcrest, which started in Eden — that covers a table across from the wine tasting bar. Wait: Is The Front Porch a wine bar, too? Mel smiles. “Depends on what time of the day it is.”