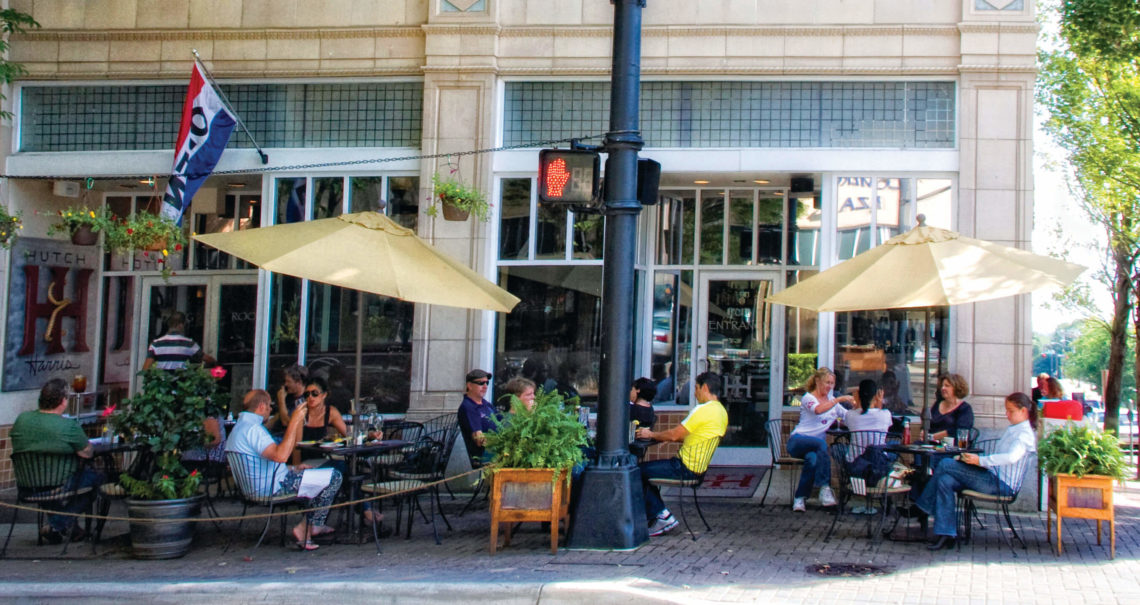 Winston-Salem is a town built on tobacco. Its brick buildings and streets radiate a sepia tone, as if the whole city is tinted with sticky, sweet-smelling tobacco. Often referred to as “Camel City” after the world-famous cigarette brand created by R.J. Reynolds Tobacco Company, Winston-Salem is full of examples of tobacco’s success, including the 22-story Reynolds building downtown that was a prototype for New York City’s Empire State Building.

By the 1930s, the maxim in Winston-Salem went that nothing was done in town unless it was first approved on the 19th floor of the Reynolds building, where the executive offices of R.J. Reynolds were located. Molly Grogan Rawls, a native and local historian, remembers the influence of the company: “When I worked at Reynolds, so many of the people who were working there also had family who worked for the company, and I’m talking generations down. My grandfather worked for Reynolds, my father worked for Reynolds, my husband … and then my son was able to work there for two summers [as a student],” she says.

After working in one of the factories when she was younger, Rawls remembers wishing she could one day work in the Reynolds building. “I would love to go into that building, because it’s so majestic, and it’s got the marble in the lobby. … I thought, ‘Now this is what I like,’” she says. Although now dwarfed by other skyscrapers in the city, including the Piedmont Triad’s largest skyscraper, the Wachovia Center, the Reynolds Building still lights up each night, a shining symbol of an empire.

Even as you head away from downtown on Reynolda Road, you can’t miss tobacco’s influence. The street narrows as you get closer to the great estate, accommodating the maples that line either side, their bright yellow-orange leaves making a stunning show each autumn. Turning off onto a long, winding driveway, a large expanse of grass and woods stretches toward a white mansion with green shutters and accents, fronted by a pond and gardens — a soothing, tranquil picture. Once the residence of Winston-Salem’s most famous family, R.J. and Katharine Reynolds, the estate now represents and sustains the city in a new way — as a museum of American art.

Completed in 1917, Reynolda House was the vision of Katharine Reynolds. “She set out to establish an American country home, a safe and healthy place to raise her children,” says Allison Perkins, executive director of Reynolda House Museum of American Art. “She also endeavored to ensure that Reynolda would be a place that would promote the latest crop rotation techniques and she could serve as a model farm for other farmers in this region.”

Once an expanse of more than 1,000 acres, the estate had, in addition to the 60-room mansion, a dairy farm, two schools, a post office, a chapel, a blacksmith shop, and a greenhouse, all of which we know today as Reynolda Village, a collection of shops and eateries. “Katharine was very committed to education, and she ensured that the people who were working on the farm, both the white and the black laborers, had adequate housing, and that they had both educational facilities and worship facilities,” Perkins says. “I think that speaks to her values not only for her family but also for the people that surrounded her and worked with her.”

Her husband, R.J. Reynolds, lived at Reynolda only six months before his death from cancer, but he had already made his mark on the city. Riding into Winston from Critz, Virginia, in 1874, he built a two-story wooden factory on Depot Street (now Patterson Avenue), and although he only sold about 150,000 pounds of chewing tobacco during the first year, he built additions or new factories almost every two years after.

The introduction of Prince Albert smoking tobacco gave the company its first national product and set the stage for Camel cigarettes. At his death, R.J. Reynolds Tobacco Company owned 121 buildings in Winston-Salem, and it grew from there, becoming the city’s biggest employer and making Winston-Salem at one point the largest city in the state.

Seeing Winston-Salem only in terms of tobacco and its former biggest employer would overlook an earlier, equally important part of the city’s history. Founded by the Moravians in 1766, Salem is the original, if quieter, half of the twin city. After building a settlement at Bethabara, which means “House of Passage,” the Moravians carefully chose a spot in the middle of Wachovia, their tract of land, and called it Salem, after the Hebrew word for peace. Within five years, the town had replaced Bethabara as the Moravian’s religious center and also became the commercial center of the northwestern frontier.

Known as a hard-working, peace-seeking people, the Moravians created a theocracy in Salem, and the church oversaw every aspect of life, including business. Also, the Moravians believed in educational opportunities for boys and girls, leading to a girls school that was the predecessor to Salem Academy, the oldest school for girls in continuous operation in its original location in the United States, and Salem College, the oldest educational institution in the state.

As the Age of Industry approached, Salem’s craftsmen found themselves unable to compete with cheap imports, so Salem created its own factories. Francis L. Fries, Winston-Salem’s first industrialist, built a textile mill in 1840 that survived well into the 20th century.

When Stokes County was split to create Forsyth County, the Moravian Church agreed to sell land to Forsyth for a new town one mile north of Salem Square. The courthouse and county seat would be located there. The church didn’t want to have a courthouse within Salem because it opposed whippings, a common punishment.

Although Winston, named for Major Joseph Winston, a Revolutionary war hero from Germanton, grew slowly at first, the town came into its own in the wake of the Civil War thanks to wagons, a new railroad, and, of course, tobacco.

By 1910, Winston was three times the size of Salem, and by 1913, citizens voted to consolidate the two towns, a hyphen placed delicately between them.

After years of growth, R.J. Reynolds Tobacco Company, like all empires, eventually fell — from about 16,000 jobs down to about 4,000 today. Mayor Allen Joines, who has worked for the city of Winston-Salem since 1971, has seen many changes in the town’s recent history. “When I first came here, Winston was dominated by a few large employers, so we’ve done, I think, a good job of diversifying our economy as well as creating a vision for our future,” Joines says. The city has recruited businesses in health care and high-technology research and has plans to expand its Piedmont Triad Research Park to become the largest urban research park in North America.

One of the other big recent changes has been the revitalization of the downtown area. “When I first came here, we jokingly said you could shoot a cannon down Fourth Street at 5:30 p.m. and you’ll not hit anybody,” Joines says. “[Today] it’s an altogether different story.”

On any warm night in Winston-Salem, people fill the sidewalk tables at restaurants on Fourth Street, from Foothills Brewing Company all the way up to Hutch and Harris Restaurant and Mellow Mushroom. Taking a turn down Trade Street, local galleries and shops in the Arts District open their doors to shoppers, taking pride in the fact that Winston-Salem is the City of the Arts, and that its arts council was the first in the nation (and celebrated its 60th-anniversary last year). Gena Knighten, owner of Chelsee’s Coffee Shop and More on Trade Street, can’t believe how far the downtown and the arts district have come since she moved in seven years ago. “We were here before a lot of this was here,” Knighten says. “We’ve seen Trader’s Row go up, we’ve seen all the condominiums and apartments go up, and you know, people actually started to live downtown.”

Knighten has also seen the number of canine customers, with owners in tow, greatly increase. “I have 12 puppies that come by to see me off and on every morning for their treats,” says Knighten, a dog lover who named Chelsee’s for her miniature schnauzer that passed away four years ago.

Vivian Joiner of Sweet Potatoes restaurant next door has also seen a significant change and has enjoyed how Winston-Salem is a big city with the friendliness of a small town, making it difficult to walk down the street without seeing someone you know. “I just strolled down the street,” Joiner says, “and I felt like I was on parade — I waved to three or four people.”

Even visitors soon begin to feel at home here. One can’t-miss attraction is Old Salem, a living history museum developed within the original town. Costumed interpreters and authentic craftspeople recreate life in Salem from 1766-1840. This year, Old Salem celebrates its 60th anniversary of historic preservation, a testament to the Moravian’s meticulous record-keeping, and the city’s desire to preserve the past.

And, of course, no visit to Winston-Salem would be complete without seeing Reynolda House Museum of American Art, the estate that represents that most famous family who built Winston-Salem from a frontier town into a bastion of industry. Now a partner with Wake Forest University, a private university the Reynolds family lured to Winston-Salem from Wake Forest in 1956, Reynolda House possesses one of the premier collections of American art in the Southeast, and the adjacent gardens and village offer recreation and shopping. From the great estate to the burgeoning city beyond, the industry of tobacco may fade, but its influence will not be forgotten.