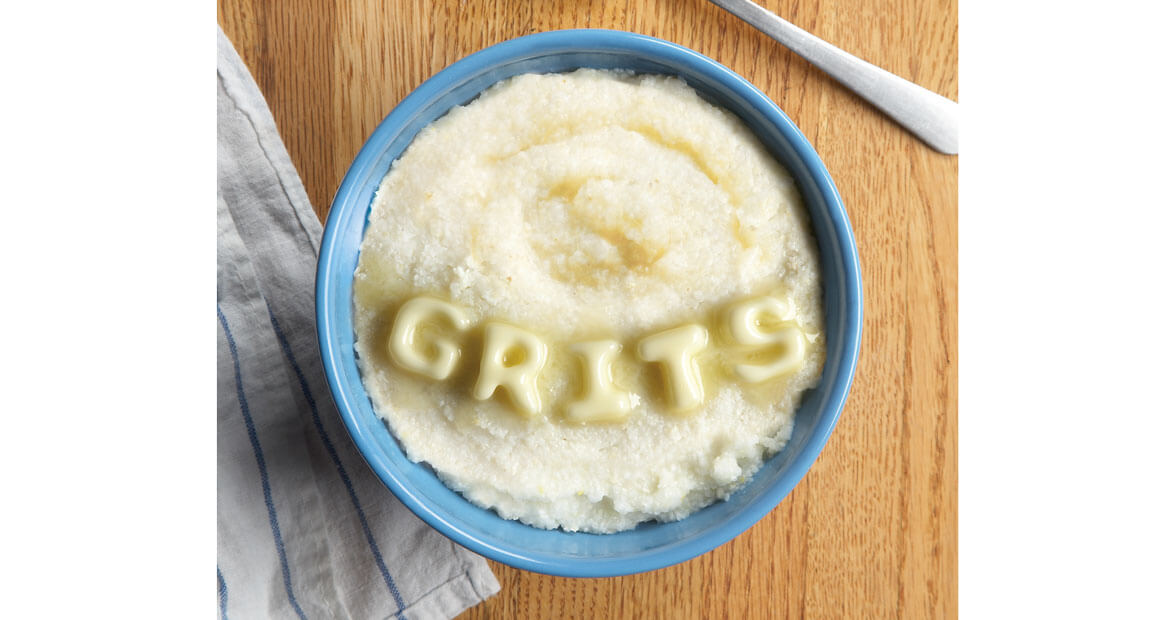 My grandmother made great grits. Among an otherwise over-buttered and over-gravied menu including Salisbury steak, they were the one delightfully simple dish she served each time I visited her in Albemarle. Before she died, I phoned her with a pressing question: How did she make her grits? “I microwaved them,” she told me frankly. “They came from a box.”

I shouldn’t have been surprised. My grandmother spent decades working in the spinning room at Wiscassett Mill, and when she wasn’t working, she prized comfort and convenience. We regularly ate on the sofa in the company of “I Love Lucy” or “The Andy Griffith Show.” But I was duped. She never had the time or energy to stand at a hot stove cooking every day. Although she hadn’t made them from scratch, she did the best she could and, ultimately, they retained their status for me as something meaningful in a way not too dissimilar from my grandmother: rough, yet soothing and familiar.

It’s not that grits are forgiving — they practically cement themselves to the bottoms of pots, and congeal when left unattended. But grits are forgivable. I have eaten them too dry and too watery — even too done-up — at fast food chains and dinner tables, and at weddings and white-tablecloth restaurants, in the South and beyond. Particularly in the latter, I may not have finished the entire bowl (or martini glass, where grits sometimes find themselves served with shrimp and bacon), but I have never turned down grits. I can’t. Grits are like family — a touchstone of place and identity.

I first came across Old School-brand grits at Parker and Otis, a restaurant and shop in Durham. I was struck by the bag’s bold pink-and-yellow label and that the mill is based in Albemarle. In hopes of bridging my instant-breakfast upbringing with newer, stone-ground grits, I called Old School and shared with the owner, Robin Hinson, that my family had roots in the area, but my family never had any roots in grits.

I drove up N.C. Highway 24/27, past the low-lying Uwharries, to the outskirts of Albemarle and Old School Mill, named not for its traditional stone-grinding techniques, but for the Endy School that once stood nearby. Hinson greeted me at the back of her near-55-acre property on the porch of a wagon-red building. The whole thing was about the size of my grandmother’s old in-town apartment, but filled with a network of grits-making pipes and machines.

“When I’m in here, it’s like Lucy in a candy factory,” Hinson confided, an aside my grandmother would have appreciated.

Hinson’s late husband, Dave, was Old School’s original miller. A commercial pilot by trade, Dave started the gristmill as a hobby, using antique electrical equipment he purchased in Cameron. Before her grits days, Hinson worked in management in one of Albemarle’s former factories. “I love manufacturing,” she told me.

At first she wasn’t sold on Dave’s electric-powered, grits side venture. It was the early-’90s, a time when stone-ground grits were still overshadowed by varieties labeled instant (precooked and dehydrated corn) or quick (a product processed to reduce cooking time from around an hour to a mere 10 minutes). Plus, Dave had no experience as a miller. While perfecting his technique, he gave cornmeal — a by-product of grits-grinding — to neighbors and sold it in bulk to fish camps that fried it into golden rounds of hushpuppies. It’s quite possible that I ate some as a child, as we frequented Pat and Mick’s Fish House in New London.

At first, Old School’s grits were more of an in-house product for the Hinson family. “They weren’t trendy then,” Hinson told me. But slowly, they took off, as a resurged interest in stone-ground grits grew. In large part, that was due to earlier work by the venerable Bill Neal of Crook’s Corner restaurant in Chapel Hill. Then, in 1985, Craig Claiborne, then food editor of The New York Times, sampled a version of Neal’s done-up shrimp and grits, which spooned bacon, scallions, sliced mushrooms, and parsley onto the traditionally simple dish popular among Lowcountry fishermen. Claiborne penned a glowing review, complete with a recipe, and other chefs soon responded with their own interpretations for ground corn. As Neal noted in his book, Bill Neal’s Southern Cooking, soon after the review appeared, Crook’s began selling upward of 10,000 servings of shrimp and grits every year.

The popularity of shrimp and grits has grown rapidly since that time, as has its association with Southern cuisine. In 2012 when the Democratic National Convention visited Charlotte, The Charlotte Observer even argued that the dish had eclipsed barbecue as the South’s iconic food. While that claim is debatable, it is at least true that today, real, toothsome grits are widely available, in a bag or on a plate.

As real grits grew in popularity, Dave found himself discussing them on QVC’s “50 in 50 Tour,” which showcased some 20 products in each state. According to Hinson, a broadcaster on the program asked Dave to define a grit. “Well, you can’t eat just one,” he quipped.

“Many people go through their whole life not even knowing what grits are made of,” Hinson tells me. Her son, Parker, then wanders into the small mill to show me what they’re made of, and more impressively, how they’re made. Hinson offers yellow, foamy earplugs as Parker presses a green button on a Westinghouse Electric panel.

With the roar of an engine, dozens of corn kernels make their way from a 600-bushel grain bin that towers outside to the mill’s interior and into a squat seed cleaner that shakes the grain to remove debris. An auger then moves the clean corn up to a pair of vertical stones where it’s crushed. As grits continue to shift through various machines, a thin layer of white powder is strewn across the room, filling the air with the scent of corn. “Every mill is a little dusty,” Hinson shouts above the noise.

At the end of the line, grits fill a canister on the bagging machine. Hinson pulls a lever and lets some fall into her hand. The ivory corn is speckled with black. Like most traditional mills, Old School grinds the whole kernel, including the small, dark germ, which many industrial operations remove. The oily germ can turn grits rancid, but it is also what adds to their rough texture and nutty flavor. Thankfully, real grits freeze well and will keep
for months.

For the bag of grits I bought at the Fresh House — Old School’s outpost in nearby Locust — Hinson offers a recipe: use four cups of water for each cup of grits. “That makes a pretty good potful,” she says. “The longer you cook them, the better they are.” As a shortcut, Hinson advises putting them in a Crock-Pot overnight, a move that seems like something my grandmother could have gotten behind.

Back home in Durham with my grits and Hinson’s recipe, I’m trying the stovetop method for breakfast with friends — my attempt to create my own Albemarle-inspired grits tradition. I immediately goof, adding the grits to water before bringing it to a boil, just as a pack of the instant ilk would have suggested. I cook them anyway and nobody at the breakfast table notices. Turns out, I’m following my grandmother’s method after all: doing the best I can.

Fresh From the Mill

Grits from the source are easy to find, if you know where to look.

Old School Brand
Robin Hinson uses antique equipment to grind corn in the little red mill founded by her husband, Dave, in Albemarle. Grits are sold at Fresh House in nearby Locust.

Bear Branch Milling
A division of Bear Creek Milling, the Bear Branch mill re-opened in 2005 after being shuttered during the Great Depression.

Old Hampton Store & Grist Mill
Dating to 1921, when it served as a connection between the Eastern Tennessee and Western North Carolina Railroad, the Old Hampton Store also operates as a restaurant and general store.

Old Mill of Guilford
Founded on Beaver Creek in 1767, the mill stone-grinds grain at its current location 500 feet downstream from its first home.