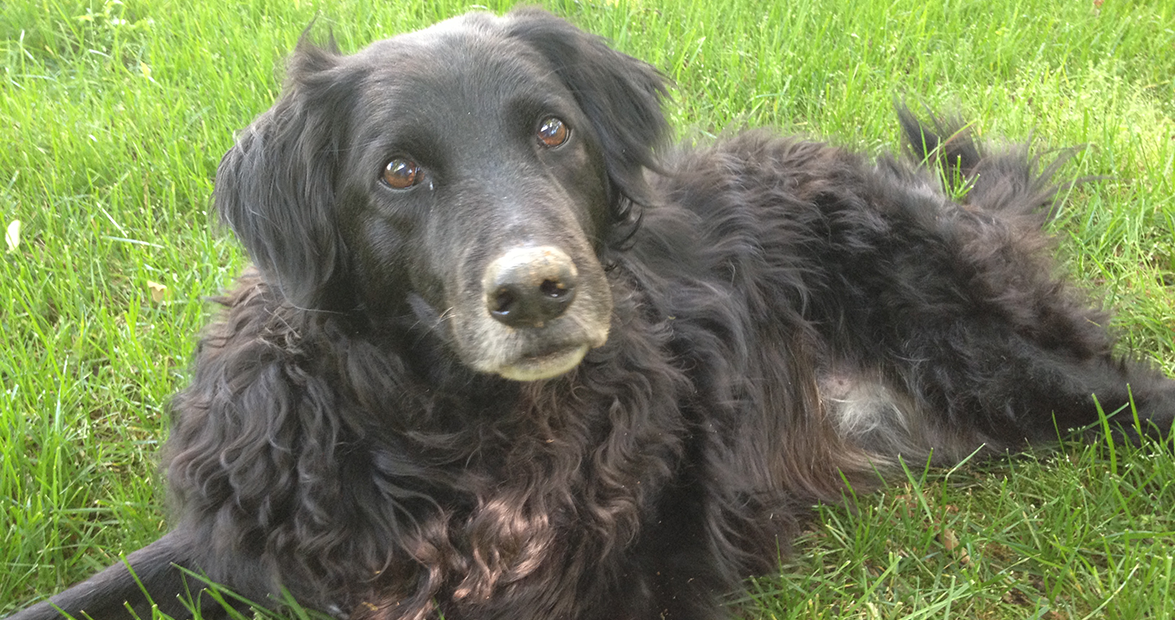 The little black dog wore a yellow bandanna patterned with tiny monkeys — Curious George — around her neck. She sat on the curb in the parking lot of a shopping center, one of about a dozen animals in a pet adoption fair, but she was off to the side, away from the other dogs, all by herself.

She thumped her tail and lifted her head expectantly whenever someone walked by. Everyone beelined toward the yellow Labs, the golden Retrievers.

Nobody stopped to pet the little black dog.

She was 5 months old, a border collie mutt. She’d been at the shelter nearly all her life, picked up as an abandoned, weeks-old stray, a sweet little dog that nobody wanted.

I loved her immediately.

I scooped her up and signed some papers and paid the adoption fee — as it turns out, she was half off; I didn’t know this until later, but her time at the shelter had expired. She was slated for euthanasia the next week.

Instead, she came home to live with me. I named her Wilma.

A few days into our new relationship, Wilma started circling my legs, nipping at my ankles, barking at me. I tried to fend off her bites, and I broke down crying because I thought I’d brought home an aggressive dog, and what would happen now?

I took her to the vet, who explained this about the breed: Wilma is a herding dog. She was herding me.

So Wilma and I started walking.

We walked a mile in the morning before I went to work.

We made a route for ourselves, a routine, and I saw the relief settle into her body.

Can we call an animal a companion? A friend?

I think so. Our kinship with animals develops early on. Some of our first toys are stuffed animals. We pat the bunny. We bring home a goldfish from the fair. We climb into bed with a bear tucked under our arm, a silent confidant to whisper our dreams to. We fall in love with Wilbur the pig. With Frog and Toad. With Curious George. We talk to our cats and our dogs and our horses and our chickens, and, although they never talk back, we’re grateful they listen.

I am sure of this: Animals teach us how to be better humans.

If it’s possible to call an animal a companion — a friend — then I’ve done that. Wilma has been by my side now for 11 years. She’s seen sickness and sadness and fear and excitement and happiness and hope — all the emotions that make a life. Through it all, her response is the same: She lifts her head. She thumps her tail on the floor. Maybe she thinks it’s her job, her purpose. I don’t know. But every time, it helps.

Wilma’s slowed down some now. Some days, we get a few steps out the front door, and she stops, then turns back toward the house, head down, tail tucked. I’ve learned that some days aren’t so good for walking.

On those days, we sit outside. She finds a spot in the sunshine — I think the warmth feels good on her back — and we listen to the birds and the neighborhood kids playing basketball and the lawnmowers in the distance, and we take in the faint smell of cut grass and wild onions lifted up by the breeze. Wilma dozes. Her hind legs kick as if she’s running, and I can’t help but smile and think, “Go, dog, go.”

I hope that whatever you’re running toward, it’s a mighty good place.