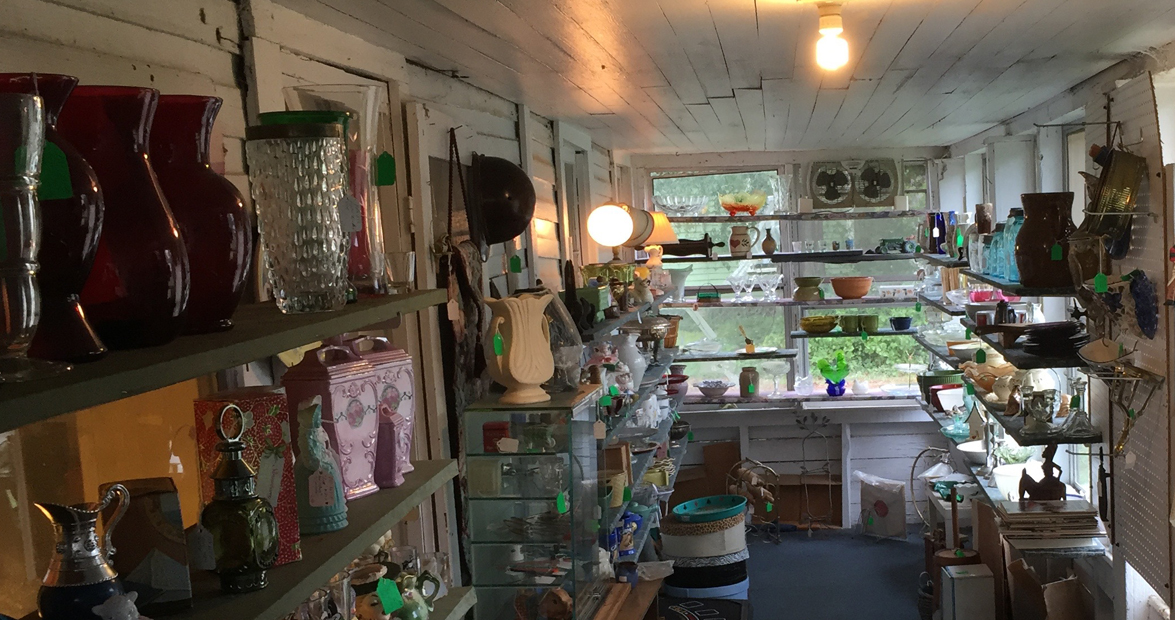 I’m told that most of the people who run the antiques stores in Cameron are gettin’ on in years, and, honestly, if I were of retirement age, I wouldn’t want to work on a Monday, either. So nobody does. You’re pretty much guaranteed that everything in Cameron will be open by Wednesday. Tuesday’s a bit of a crapshoot. Monday’s a lost cause. Just about everything is closed on Monday. Of course, nobody told me any of this until I actually showed up in town. On a Monday.

I made the most of it. I peered into the windows at The Market at Muse Brothers Store, at Now & Then Antiques, and at Sullivan’s Antiques & Collectables, all of which seemed to have a nice collection of stuff inside. There are 12 antiques stores on Carthage Street in Cameron, a small town of just 294 people that’s a mile or so from U.S. 1 in Moore County, between Southern Pines and Sanford. I pulled into town in the pouring rain. I was hungry. I asked the woman behind the counter at Cameron’s only gas station if there was a place to eat nearby. Yes, she replied, the Dewberry Deli and Soda Fountain. It is closed on Mondays.

The only store open on Monday was This Old House Antiques. It’s open because it’s in a — wait for it — old house, and several people rent out rooms and fill them with stuff they think is sellable. They each take turns running the place. This way, no one person has to be at the store every day of the week. Larry Arons drove up from Fayetteville to work on this particular Monday. He sat behind a messy desk in a messy room. Only his polo shirt, slacks, and white beard were neat. Despite the fact that we’d just met, Larry had a lot of things to tell me, including a long and detailed history of his last name, which is not spelled Arons but, rather, Aaron on his birth certificate. He’d discovered this only recently while trying to get a passport, and you might think that this would be the sort of thing that would cause problems but, in fact, it was not. The story took about five minutes to unfold and reach that conclusion. But I was in the store by myself, and Larry had a captive audience, and I could tell he had been waiting to tell this story to someone, so I let him tell it.

I wandered around. The first thing I discovered: old NASCAR knick-knacks: 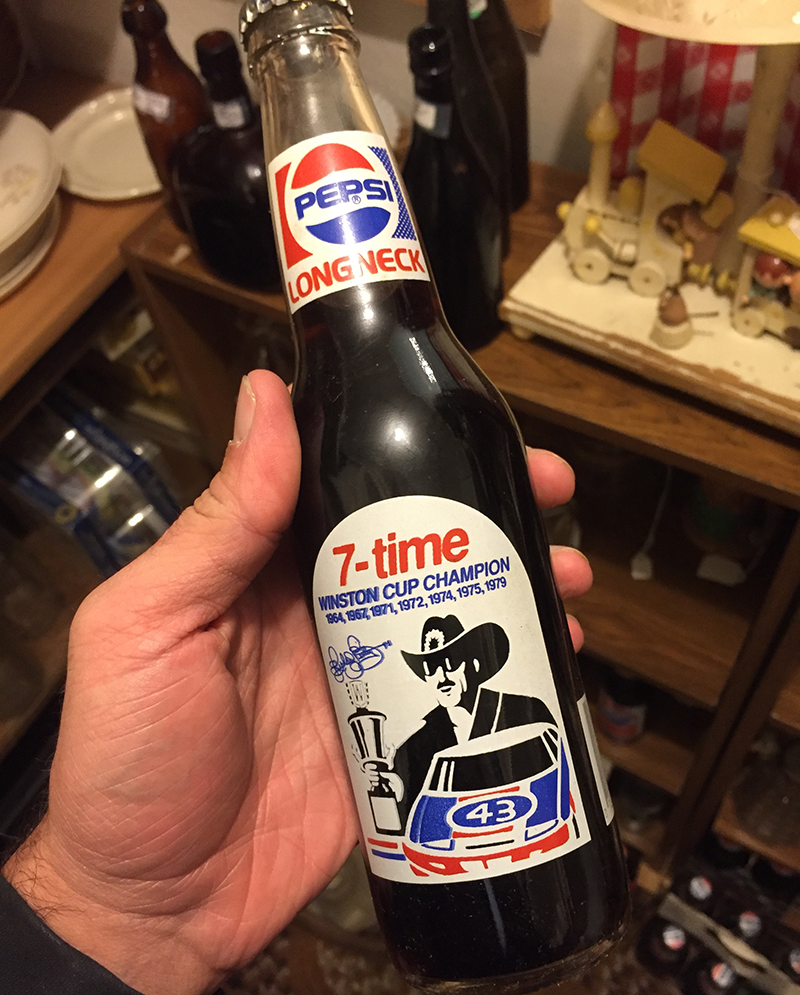 Richard Petty’s last NASCAR season was in 1992, when he was 55 years old and finished, on average, in 23rd place. But The King ran in every Winston Cup race that year as part of what he called a “Fan Appreciation Tour,” which also gave him the chance to sell all sorts of Richard Petty-branded products, including plaques, blankets, and soft drinks. So yes, I found not only an original 1992 Richard Petty Pepsi longneck, but the original 1992 Pepsi inside it, as well. You think it’s flat? I think it’s flat. But I decided not to pony up $3 to find out. 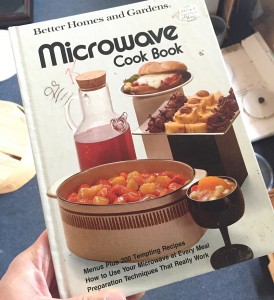 There was a time when the microwave oven was new and intriguing. My grandfather bought one during this time, and thus had no idea that it would be a bad idea to microwave a raw egg. The timer dinged, and he pulled the egg out, staring at it curiously for a few seconds before it exploded and sent gooey yolk all over his kitchen. Those were exciting times.

Well, what if you could get that excitement back in your life? What if you could use the microwave to prepare every meal? You can! This book implies that there is some sort of culinary wizardry that comes from a microwave. As a formerly single man who did not want to spend more than two minutes preparing a meal, the Microwave Cook Book speaks to me. Feel no shame, zap jockey! You are more than just a slinger of Stouffer’s and Lean Cuisine! You are the Mario Batali of reheating pizza! 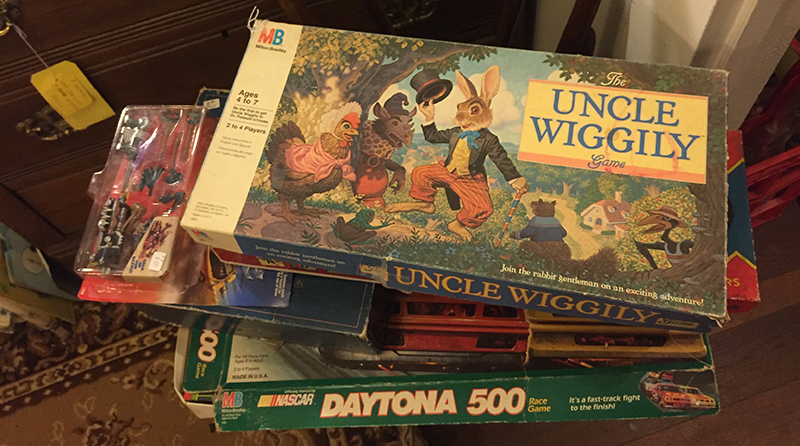 Man, you really don’t see many gentleman rabbits nowadays. Basically, the point of this game is to make it from Uncle Wiggly’s bungalow to Dr. Possum’s cabin by drawing cards, which tell you how many spaces to move forward. Space number 58 instructs you to go down a rabbit hole, which is a great metaphor for this entire store.

Really, though, there are a lot of another man’s treasures for sale at This Old House. You just have to spend some time pushing aside somebody’s old vacation slides and glass Smurf tumblers to find them. The thrill comes from the hunt. You don’t know what you’re looking for until you find it. Or break it. The sloping, bouncy floors always rattle entire roomfuls of precipitously-placed plates, no matter how softly you tiptoe around.

As I tiptoed, I thought about what it would be like to run an antiques store. I think I could do it. For instance, did you know that I have not one, but several Columbus Clippers bobblehead dolls? I do! I could sell them at my store! They are fairly worthless now, but I’m just biding my time until they become antiques, when they will inevitably fetch a fair and sensible price from someone who has always wanted a ceramic figurine of Derek Jeter in a minor league baseball uniform. There’s always eBay, I guess, but where’s the fun in that? Online, this random bobblehead is merely kitschy. But in an antiques store, to somebody, that’s a find. At a place like This Old House, you are your own search engine.

As I got ready to leave, Larry told me that the selling of stuff is only part of the job. He’s here, mostly, because he likes meeting new people and telling them his stories. He likes getting nostalgic with them. The money? Psh. “You don’t do this if you want to make money,” he says, laughing. I get it. Running a place like this appears to be like participating in capitalism with Monopoly money, which, let’s be honest, is probably on sale at an antiques store somewhere in Cameron. I’ll have to come back on a Wednesday to see if that’s true.