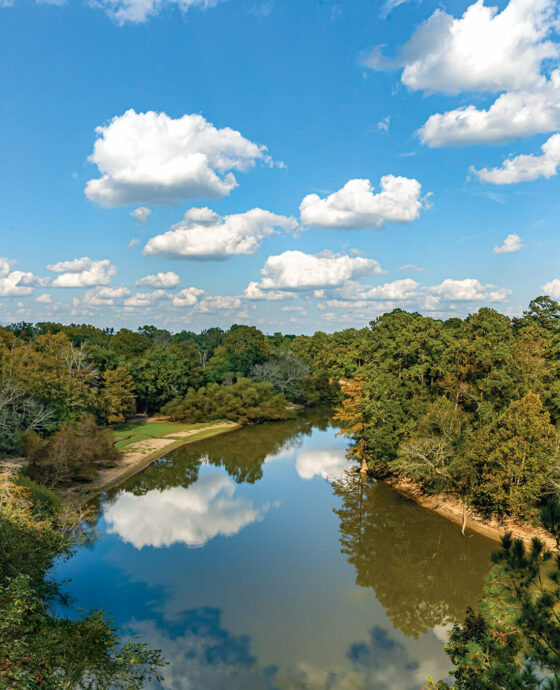 There are questions we ask ourselves to pass the time. Many of those questions, for me, concern matters of quantity. “How many minutes does this stoplight take?” I’ll ask myself, checking the dashboard clock, or, “Look! How many leaves do you think are on that tree?” I’ll ask my little boys.

Cliffs of the Neuse State Park raises an array of questions of quantity. The place formed when the Earth’s crust shifted. How many years ago? Millions of years. The shift caused the river to bend. The river’s bend wore away the land. How much land did it wear away? Ninety feet, top to bottom. Six hundred yards across.

To get to the park, you travel down two-lane eastern North Carolina farm roads, past scattered houses, under a sky opened by tree-bare fields. Spring pushes in, and, with the car windows down, the world offers up the heady, nubile scent of ready land, fields waiting to grow soybeans, hay, corn.

Once you reach the park’s entrance, the fields stop. The sky becomes tangled in a tunnel of branches. The smells change from those of cultivation to those of the wild world. The sweet scents of pine bark and rotting leaves, the luxuriant, loamy riverbed, and moist mosses and lichens blend and reverberate through your senses.

I can’t remember a time when I didn’t know the Cliffs. My parents hefted my brother and me around the six miles of bough-steepled trails before we could walk. In the visitor center, we held the Flintstones-like speakers to our ears to hear local voices tell us about the park’s history, the rocks, the people, and the wild things there. My mother took us to the lowland groves, where cypress knees poke from the mossy earth like gnome hoods.

“Here is where the fairies live,” she would say, and we would strain our eyes for magic glimmers darting between the roots. “Do you see them? Is it time for their tea party with the rabbits? How many fairy houses do you see?” How many? How long?

My father took us to the highland, the 90-foot drop that overlooks the forest and the Neuse River’s gentle bend. The Cliffs are striated like those space images of Jupiter — colorful, earthy layers revealing hundreds of years, then thousands, then millions as your eyes make their way from top to bottom. 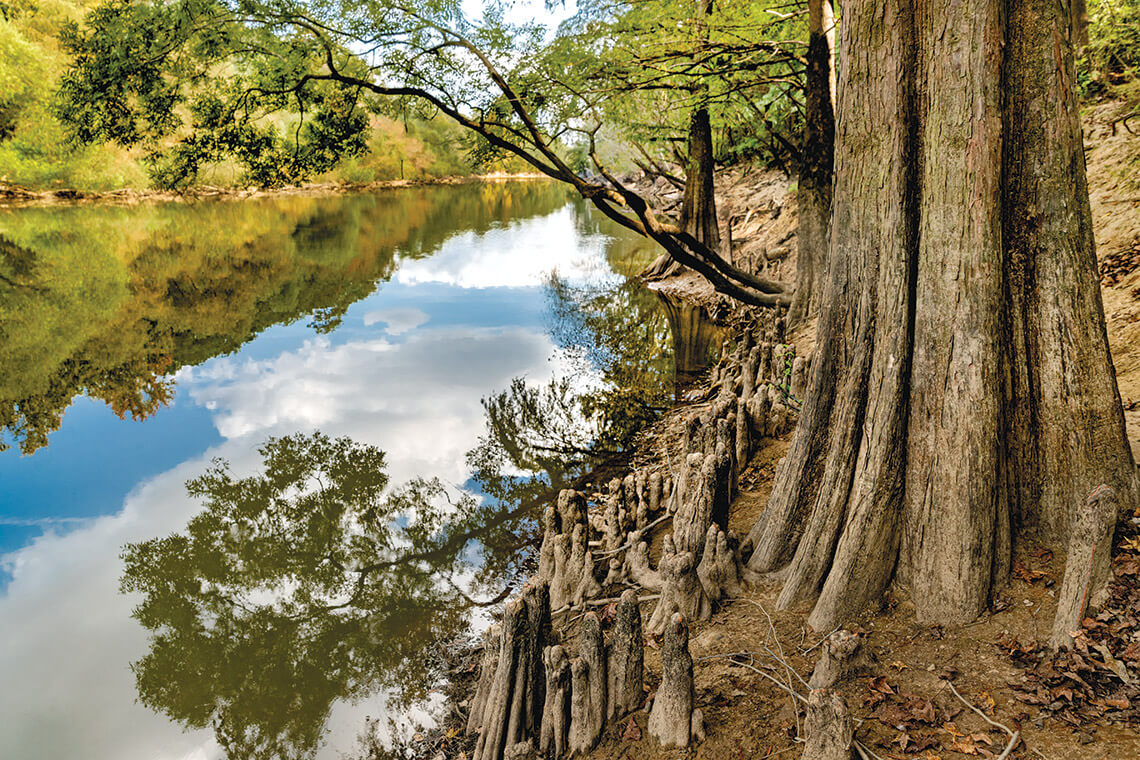 Wonder is all around at Cliffs of the Neuse State Park such as the cypress knees — those knobby protrusions poking up along the banks.

“I once tried to hide on the side when I was a boy,” my father would say each visit, “and I fell off.”

But these are small questions, human questions, tiny amounts — immediate, personal matters of abundance and time. The quantity of the Cliffs spans vast and deep.

The plants: More than 400 species have grown wild here. The Galax, a plant more commonly found in the mountains, supplies milky wands of flowers to the understory. Curtains of Spanish moss, a cousin of the pineapple, grow at the Cliffs, near the westernmost part of its range. The slopes of Virginia pines can fool a wanderer into thinking they are no longer on the Coastal Plain and have somehow stumbled into the foothills.

The animals, too, live in abundance here: The otters gambol like frisky puppies on the Neuse’s banks. The coyotes, fox squirrels, raccoons. The owls. The northern parulas — little greenish-gray-and-yellow birds that nest in the tangles of Spanish moss. The summer tanagers, red as berries, flit between leaves in the hardwood groves.

Now, my own children visit the cliffs. Where my brother and I looked for magic, my children look for bugs. Their questions are different from the ones I asked when I was their age.

“How many species of ants live at the Cliffs?” my older son asks. At least 41. A fellow ant researcher and I once found that many species in just a couple of hours one summer day. That’s 41 creatures as different from each other as lions are from house cats, and house cats from cheetahs. 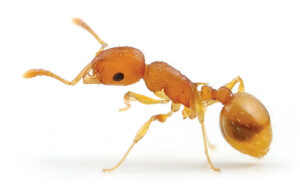 Some, like Temnothorax acorn ants, build their homes inside the nuts they’re named for; cracking the hulls will reveal a palace with tiny rooms — a nursery, a throne room, a trash heap. Some, like Strumigenys trap-jaw ants, have intricate, long mandibles that snap shut on their prey. They’re smaller than the apostrophe in this sentence, but they are top predators in their miniature realm.

Others, like Formica integra — large, red-and-black field ants — are more conspicuous. They pile mounds of bark and bits of leaves around tree bases, dig trenches to make ant highways between trails, and fan out, hunting, scavenging, searching all day. They’re pesky, but they’re native. Though they can’t sting, they can pinch with their jaws, and will eagerly spray a warning of formic acid to urge you to leave them alone. Formic acid won’t kill you, but it smells strong, like vinegar. In some places, the dirt looks like a living thing with the number of their bodies crawling across it. 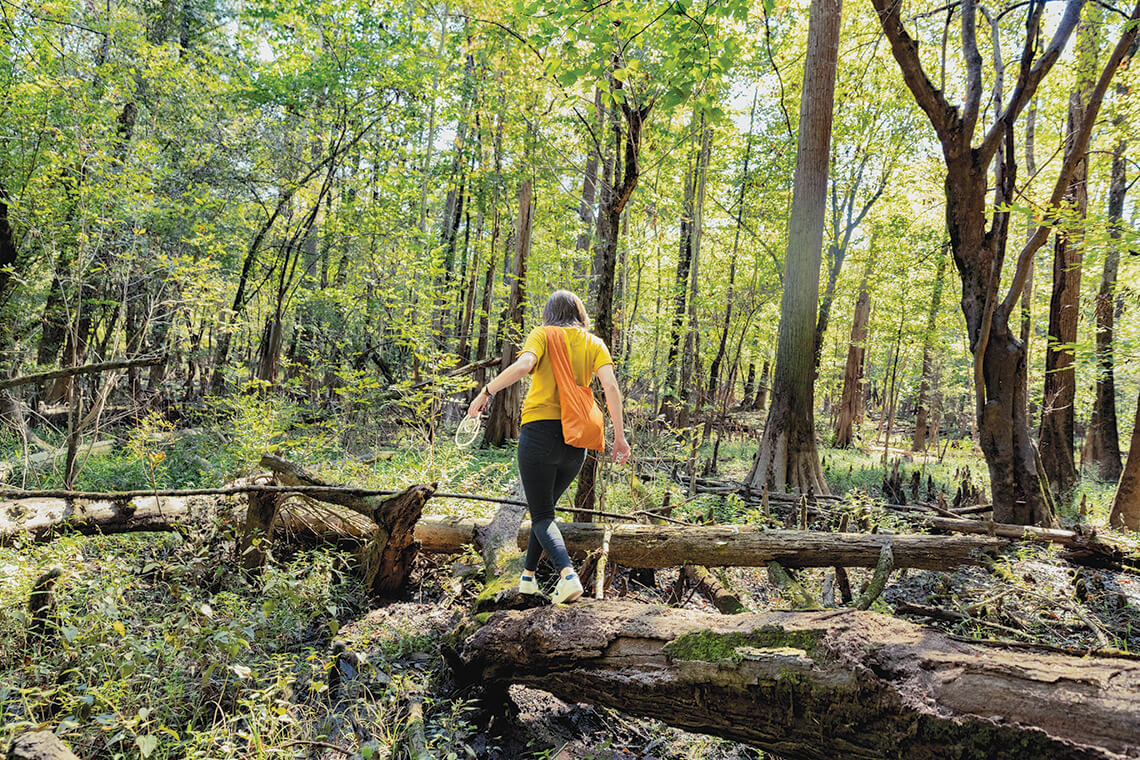 Another question: “How many ants live in the park?” my younger son wants to know. The answer to that is broad. More ants than people in Wayne County, where the Cliffs sit. More than all the people in the state of North Carolina.

Another question still: “How long have they been there?” Since before Lionel Weil, an entrepreneur who owned the Cliffs and donated the largest chunk of land to make it a state park in 1945. 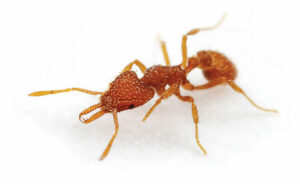 Since before folks came from near and far to the nearby town of Seven Springs, which was once known as Whitehall, to drink the healing waters from the springs, a gallon a day. Before men fought the Civil War here, before the European settlers set up a trading post here.

When the Saponi and Tuscarora peoples gathered between rivers to hunt and celebrate as sunlight skimmed the grass at daybreak, the ants were here. The ants came even before the tanagers and raccoons. The ants have been here, leaving their footprints in the sand, small but not insignificant, for millions of years. The Neuse shaped the Cliffs, but the ants shaped the life abundant. They planted seeds, cleared away the dead. They chased off invaders and tended to the lush planet. They cleared out fairy houses and stumbled over our toes, disappearing in the sand at the Neuse’s beach on the 11-acre swimming lake below. In the millions of years since the Cliffs formed, the ants have been here.

But how long is millions of years?

Suppose we laid out time, the years of the Cliffs’ existence, in a line as long as a yardstick. Millions of years before our yardstick, before the shift, shallow seas covered the land. Today, the shells from those seas poke out from the lower layers of the rock face. At the yardstick’s beginning, you’d see plants, prehistoric crocodiles, duck-billed dinosaurs. Many of these things would flash and fade along our line like fireworks in the night sky. But the ants would be there all along. Humans would show up at the end, a hair’s breadth on the yardstick. We have flashed and not yet faded. The ants remain. This world, the world of the Cliffs of the Neuse, has always been theirs. They share it with us. 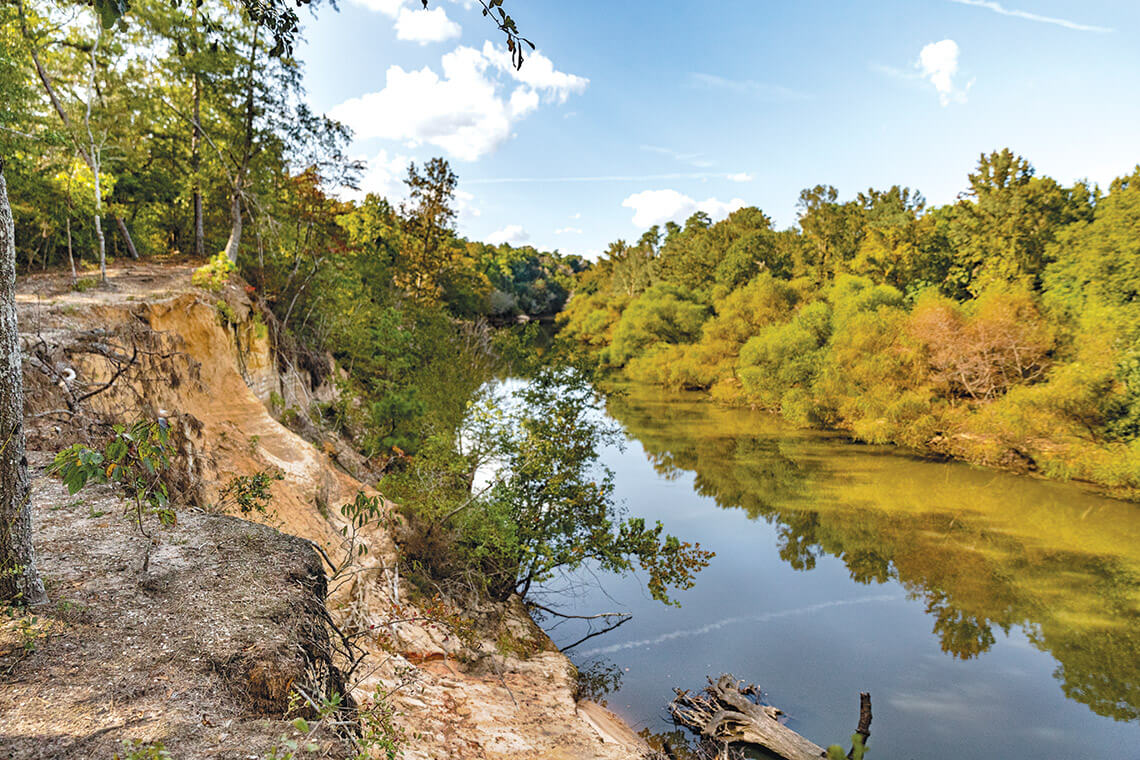 Over millions of years, the Neuse River has made an indelible mark on the topography of Wayne County — and ants have made their mark as well. photograph by Charles Harris

That’s the problem with questions of quantity, matters of passing time. The answers mean something to us, but they’ve got very little to do with us. The river can carry away the earth in tiny mouthfuls to form cliffs; the ants can sculpt a forest with their own mouths. They can each make Goliaths. They have the time.

A hair’s breadth is its own quantity, a measurable width, an ant to a cliff. How far across that hair’s breadth will each of us walk? Some things could be measured but never will be in our lifetimes. We will never know our weights as we sagged on our fathers’ shoulders, or the amount of the Neuse’s water flung from children’s fingertips into the lake. We will not know our own life’s quantity, how long we will be here.

Other things cannot be quantified, yet they still exist, and will exist beyond us. The cold, damp scents rising from a forest floor in spring. The fairy tales told in a cypress grove. The feeling of looking over a cliff ’s ledge, or of being encircled by trees, or of large, human arms folding around our bodies, lifting us above the ants, toward the sun, higher, higher, to see the colorful bands of time descend to the river’s bend. To watch the river moving its immeasurable water and life, rolling still forward to that ancient ocean out of view.