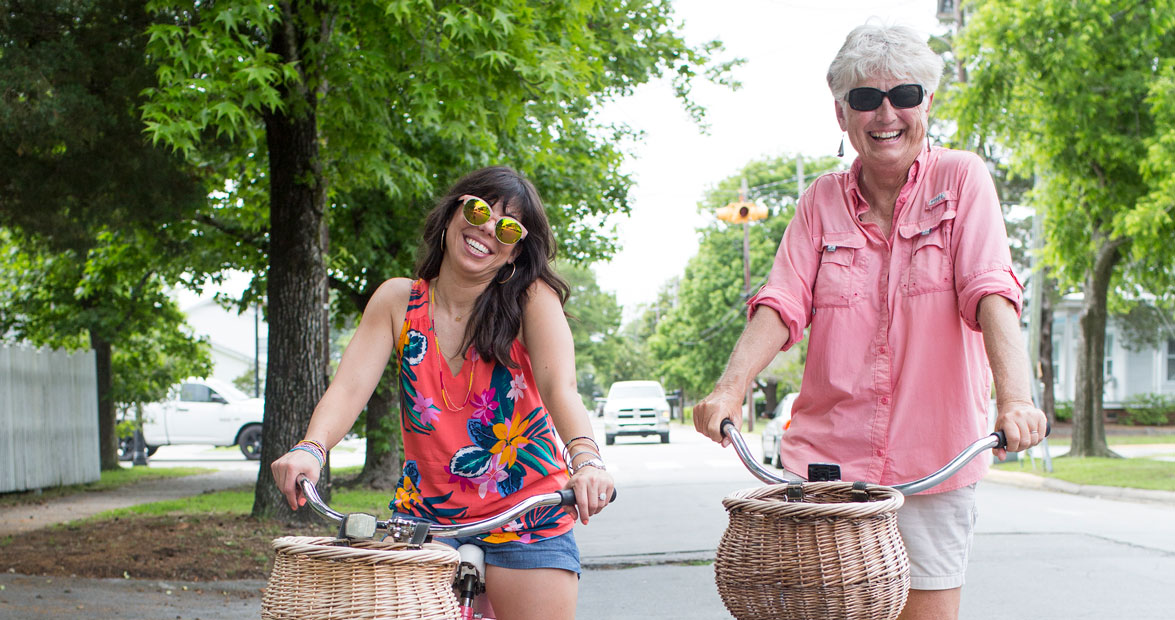 Beaufort has seen a lot in its long, colorful life. This coastal community, established in 1709 and incorporated in 1723, is the third-oldest town in North Carolina (only Bath and Edenton are older). In the three centuries since its founding, pirates, freed slaves, fishermen, and a host of other travelers have all sought shelter in this quiet corner of Carteret County. Today, some 4,000 people live there year-round; come summertime, this town swells with folks visiting from across the state and around the world. And even though Beaufort only comprises a few square miles of land, there’s always room for one more wanderer seeking the tranquility it so graciously offers.

One weekend won’t suffice to take in all there is to do in Beaufort. Here are nine of our favorite activities for you to try during your next visit, with plenty of other possibilities to keep you coming back.

Take a ferry ride around the Rachel Carson Reserve

Many interesting animals live along the reserve’s sandy shores, perhaps none of them more popular than the wild horses. Comprising 2,315 acres and a handful of islands, the reserve is only accessible by boat, which is why visitors often choose to take a ferry ride around the perimeter for a glimpse of the horses on Carrot Island. In addition, you’ll view Beaufort’s breathtaking waterfront from the water.

Tip: For an extra $10, the ferry will drop you off at Carrot Island, which includes a number of scenic nature trails.

Blackbeard’s flagship, the Queen Anne’s Revenge, lies 28 feet below the waves in Beaufort Inlet, but you don’t have to dive in to learn all about it. The North Carolina Maritime Museum is the official repository for the artifacts excavated from the ship. There are also exhibits on the area’s lighthouses and lifesaving stations, the seafood industry, motorboats, and more. Be sure to cross the street and visit the Harvey W. Smith Watercraft Center, too. The facility teaches visitors all about the town’s history of custom boatbuilding, complete with hands-on demonstrations.

Tip: This year marks the 300th anniversary of the sinking of the Queen Anne’s Revenge, as well as Blackbeard’s death. In recognition of these pivotal moments in our coastal history, the museum is hosting special pirate-themed events throughout 2018.

Stick your toes in the sand on Radio Island

Originally named Inlet Island, Radio was created in the 1930s with sand dredged from the nearby channel. It became known as Radio after private investors purchased it from the U.S. Navy and built a 280-foot-tall tower, establishing the first radio station in Carteret County. Radio is no longer home to the tower or the station, but the island’s white sand and easy access to the water have made it the go-to playground for residents and out-of-towners alike. There’s even a yacht club, several marinas, and a fishing pier.

Tip: Radio Island boasts one of the largest public boat ramps in the area. Make good use of it: Bring a boat and explore the waters around Beaufort.

Take a stroll down memory lane

Stretch your legs while visiting some of Beaufort’s many well-preserved historic sites. There’s the Old Burying Ground, Purvis Chapel, Hammock House, the Old Jail, and more. Start your walking tour at the Beaufort Historic Site, which has multiple structures depicting life in the 18th and 19th centuries.

Fish, fish, and fish some more

Beaufort was originally named “Fish Town” because the waters around it produced so many menhaden for the fishing industry. While you won’t be catching the same amount of fish as those bygone fishermen, you can still drop a line for red drum, flounder, Spanish mackerel, and more — all without leaving sight of land. There are several docks to cast from, as well as boat launches for inshore fishing.

Tip: Head offshore during the major fishing events held in and around Beaufort, including the annual Spanish Mackerel & Dolphin Fishing Tournament.

Mill Whistle was Carteret County’s first brewery. It was built on the site of a 100-year-old lumber mill and operates under the less-is-more philosophy. Producing just 31 gallons of craft beer per batch, this one-barrel brewery is able to create many excellent beers instead of a large amount of only a few. The best part? Each of the beer’s names reflects a part of Beaufort’s folklore, so you’ll learn about the town as you sample the brewery’s creations.

Tip: The lumber mill is closed, but a lumberyard still operates next door to the brewery. Stop by Mill Whistle at 4:45 p.m. to hear the yard’s whistle blow.

This French bistro-style restaurant is the brainchild of Charles and Wendy Park. Beaufort Grocery opened in 1991, serving casual lunch offerings such as their now-iconic apple granny sandwich: chicken salad with dill weed, Granny Smith apple slices, Cheddar cheese, onions, and lettuce inside a fresh croissant. The couple’s midday meals proved so popular that they began serving elegant dinners as well. Today, BGC is open six days a week for lunch and dinner, with brunch also offered on Sundays. Takeout is available, including prepared picnic baskets for those heading down to the shore.

Tip: Save room for dessert: Wendy’s wide assortment of sweet treats are as delicious as the meals — especially her cheesecake.

Take a bicycle ride to remember

If you’re a fan of the Nicholas Sparks books A Walk to Remember and The Choice, you’ll love riding a bike around Beaufort. The “A Ride to Remember” guided tour takes visitors to many of the locations mentioned in Sparks’ writings, including the historic district, the waterfront, and the Grayden Paul Bridge. Riders will also receive a paperback copy of The Choice signed by Sparks himself.

Tip: Click here to see our photo essay on additional places to bike to in Beaufort.

“The Fish Bouffant” is a name sure to bait you in, but it’s the colorful tale behind this artist’s surfboard-remnants-turned-art that will hook you. Craig Gurganus got the nickname for designing fish, crabs, and other underwater animal life out of chicken wire and fiberglass, an idea he picked up during his sojourn in southern California. He returned to North Carolina — he’s originally from Rocky Mount — and started making his own versions in Beaufort, but he later swapped out his original materials for scraps of surfboard. The bouffant comparison followed: the worn and weathered board fragments puff out, just like the ’do does.

Tip: Gurganus’s artwork is showcased in various locations around town, including Beaufort Grocery Company, the Maritime Museum, local inns, and more. Admire the pieces on display, then stop by his shop and purchase your own.

This combination of waterskiing and flying a kite will be something that you never forget. A seasoned pilot, as a kiteboarder is called, can get as high as 40 feet off the water; with a stiff enough breeze, they can go as fast as 28 miles per hour. You won’t master this in one day, but it’s an experience that will inspire you to put in the practice.

Tip: If you’re a bit nervous about learning to kiteboard in front of strangers, you and a few friends can opt for semi-private lessons.