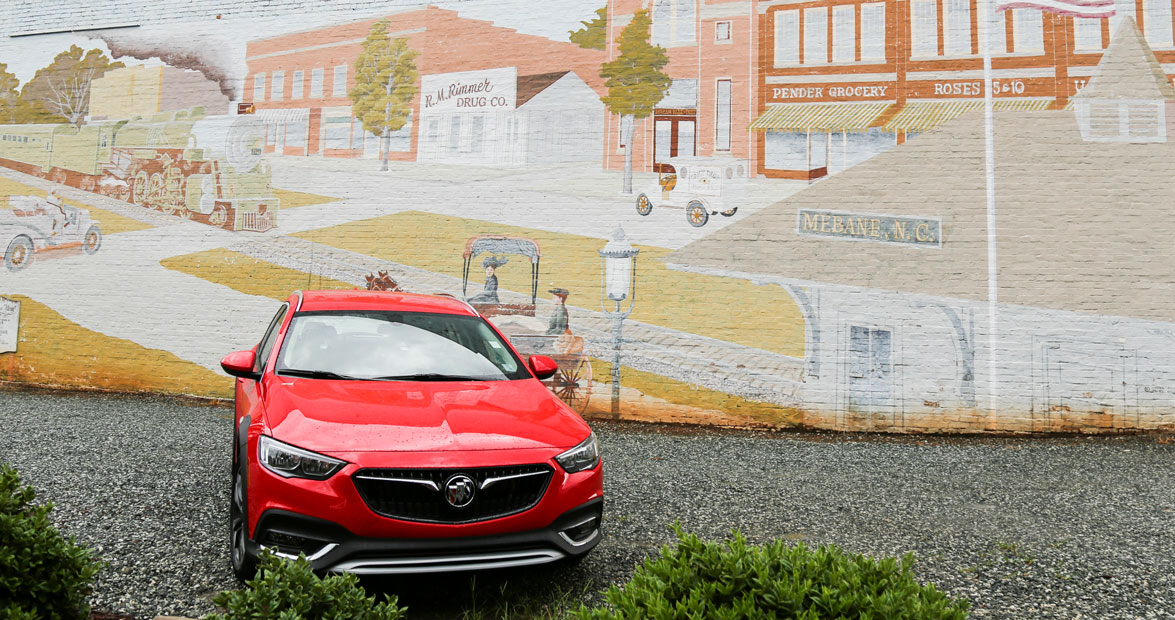 While it’s one of the fastest-growing communities in North Carolina, Mebane still has a small-town vibe that makes you feel right at home as soon as you arrive. So take that exit. Make the time. Leave the interstate behind. A whole other side of Mebane is waiting.

Feel like part of the family at a second-generation eatery

Every year, Lou and Lisa Martinho of Martinho’s Bakery & Deli pack up and head to Portugal to spend two weeks with their relatives. Mebane laments: Locals take to social media, call one another on the phone, and stop into neighboring businesses, asking when, when will Martinho’s reopen. Every year. Even though Lou and Lisa post it on the restaurant’s Facebook page and on the store’s front door. If that sounds like an overreaction, that’s because you’ve never tried their cheesecake or homemade bread, made fresh daily. One resident describes Martinho’s as “a staple of my life,” which pretty well sums up what this bakery, deli, and pizzeria means to Mebane.

You’ll feel as curious as Alice when you enter Fifth Street Books, which is fitting, seeing as how you can pick up a copy of Lewis Carroll’s masterpiece and other titles for only pennies on the dollar. A true warehouse of reading material, Fifth Street has more than 100,000 books to choose from. Teachers pay only 25 cents for every children’s book they purchase; other customers pay just 99 cents per book.

Tip: Fifth Street has its own writer-in-residence — well, cat-in-residence. Be sure to pet “James Patterson” as he weaves in and out of the aisles.

Pick up a piece of North Carolina history

In 1991, after years of antique “picking” with his father, Jon Lambert founded an auction house just east of downtown. Nearly 30 years later, little has changed inside Mebane Antique Auction Gallery’s 15,000-square-foot facility. Bidders still sit on an assortment of church pews, folding chairs, and old movie theater seats. An auction still takes place every week. Most important, North Carolina history is still preserved through the items sold, thanks in large part to Lambert’s encyclopedic knowledge of our state’s objects. Stop in on Fridays at 1 p.m. for the auctions; you’re sure to find lots of nostalgic items.

Tip: MAAC offers call-in and online bidding if you can’t make it out to one of these old-fashioned auctions.

Enjoy the fruits of a labor of love

In 1997, Gene and Debbie Stikeleather began restoring a former tobacco farm that had been abandoned a decade before. The house, barns, and other buildings had been “left in a sorry state,” Debbie says, but the couple rolled up their sleeves, got to work, and soon, the farm was once again fit for farming. No one in the area was operating a vineyard, so the Stikeleathers established Iron Gate and began creating award-winning wines. Through it all, the two have paid homage to the farm’s roots with wine names like Pack House Red, Brightleaf White, and Carolina Gold.

Tip: Debbie chronicled the couple’s earliest days of vineyard-tending and winemaking on her blog. Peruse the pages of The Winemaker’s Journal here.

Get a taste of the local life

You can find fine dining right in the heart of town thanks to The Mebane Downtown Table, a farm-to-table establishment using local ingredients. Chef Bob Compton looks to neighboring sources for as much meat, produce, and other items as possible. Because of that, the availability of ingredients, and thus the menu, varies from week to week. When possible, try the fried green tomatoes with house-made pimento cheese and the double-cut pork chops braised with Coca-Cola.

Tip: The owners of The Table also own Reed’s Coffee and Art, a bistro with an art gallery on West Clay Street. Stop by after dinner for an eye-catching, decaffeinated end to the evening.

Have big fun with little trains

When Mebane resident Tommy Long passed away in 2004, he bequeathed to the town some of his most prized possessions: several thousand model trains, a collection valued at more than $250,000. The town later decided to make the miniature engines, cars, and cabooses accessible to the public, laying the foundation for today’s Mebane Train Display. Visitors can now view seven trains winding through four different layouts, complete with detailed scenes including a mountain cabin, carnival, and farm. Hundreds of other trains are stationed in glass cabinets along the walls, with thousands of parts and pieces still in storage. The Display is open the second Saturday of each month and on special occasions, so plan your visit accordingly.

Tip: With so many extras to choose from, curators routinely swap out the trains on display. Stop in again and again to see more of this incredible collection.

Catch a glimpse of yesteryear

They’re sometimes called “ghost signs,” old advertising murals that have been refreshed and repainted over the years, but there’s nothing spooky about them at all. They’re more like friendly spirits, each contributing to an area’s historic feel. Two such Coca-Cola-themed ads are located in Mebane, one on the Dick & Jane’s Martini & Tapas Bar building and another on Solgarden Eclectic Living. Another mural, located on the former Rice’s Jewelry Store, was created in the 1980s but depicts life in Mebane in the ’20s — complete with the town’s gone-but-not-forgotten train depot. A fourth had to be totally re-created: The famous painting Landscape — Tobacco Curing by New Deal artist Margaret C. Gates, originally installed in the town’s post office in 1941, was damaged during remodeling efforts in the ’60s. Artist Henry E. Rood III revived the mural in 1965, and it now adorns a wall of the post office once again.

Tip: These restored paintings are just some of Mebane’s murals. Keep a sharp lookout for more eye-catching imagery as you stroll through downtown.

Discover your new favorite place to sit and sip

Filament Coffee + Tea serves as one of Mebane’s most attractive meet-up spots, and it offers a quiet area to read and work. Its decorations are eclectic — an assortment of lightbulbs hanging from the ceiling, for instance, showing off their “filaments” — and a shop inside sells journals, candles, local art, and more. There’s also a special event held every week; the recent “Strut Your Mutt” Thursday was particularly popular with people and their pups.

Tip: Be sure to try the pastries, some of the best in town!

It’s sometimes said as an insult, but in Mebane, “go climb a tree” means go talk to Patrick Brandt, owner and operator of Piedmont Tree Climbing. Like the company’s name suggests, Brandt takes clients all around the Triangle and Triad to experience nature in a way that few ever get to. Climbers use basic climbing gear — provided by PTC — to ascend and descend safely, as well as walk out on sturdy limbs and pass from one tree to another. Public and private climbs are available for those ages 6 and older, with a portion of the ticket proceeds supporting the parks where Brandt climbs.

Tip: Brandt also offers tree swing installation. He’ll come to your home, assess a tree’s viability for a swing, and then climb up to securely fasten the swing himself.

Take a trip down memory lane

Each month, the Mebane Historical Museum offers a fresh, free program for the public to enjoy, along with ongoing exhibits. Through January 1, for instance, the museum is hosting Forgotten Fizz: Regional Beverage Bottles of the Past & Antique Openers; come learn more about your favorite soft drinks, and about ones that you may have never heard of. There are also several big events during the year, including the annual “Shake” Harris Hickory Golf Tournament, in which participants use golf clubs made of hickory wood in a nod to the past. Another is the Harvest House Tour, which offers a look at some of Mebane’s beautiful old residences.

Tip: The museum is located in the same building as the Train Display, so step on over when you’re done looking at the locomotives.

Get back to nature without leaving town

Open seasonally March through October, Lake Michael Park has plenty of warm-weather activities for the whole family. This 200-acre recreation area features a number of nature trails, playgrounds, and picnic areas, as well as sand volleyball. In the center of the park is its namesake lake — 59 acres, with two fishing piers. Want to get out on the water? Johnboats and paddleboats are available for rent, and boat access is provided for those bringing their own small watercraft.

Tip: There are limits on the size and number of bass that you can keep when fishing on Lake Michael, but crappie and bream are free game. These species are often overpopulated, so the park invites anglers to take as many as they’d like.