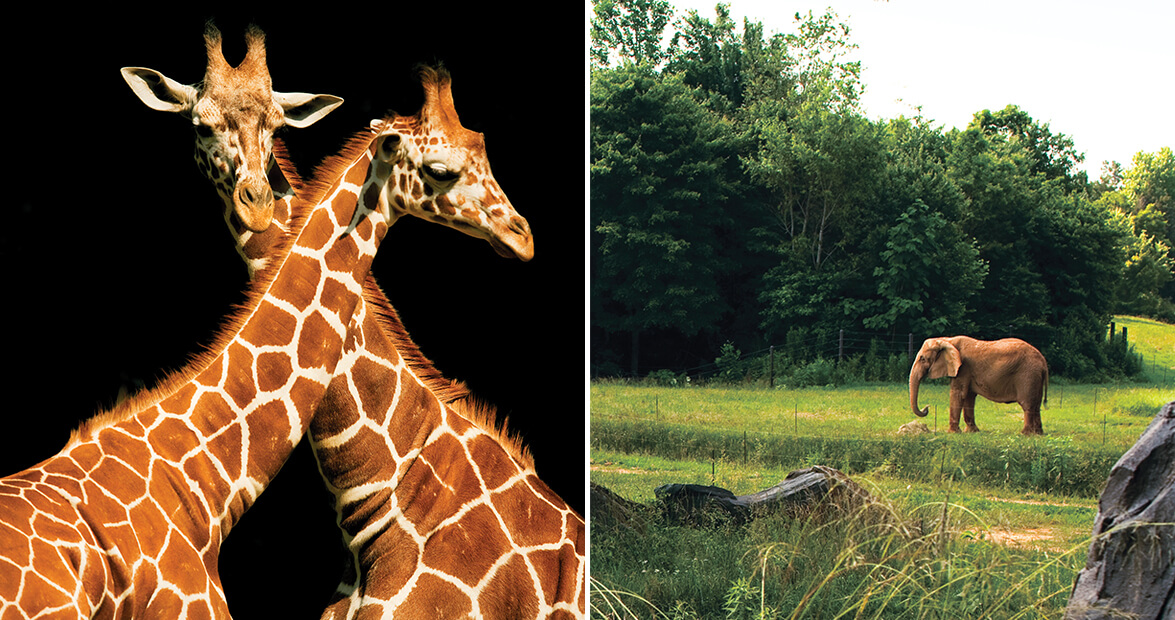 Nikita dives into the Carolina blue water — all 1,200 pounds of him. He glides forward, then sideways, pushes his massive paws off the glass of his 146,000-gallon swimming pool, and gracefully backtracks toward the rocky edge. Above the water, onlookers, some on tiptoe, peer over the side of the glass, Nikons at the ready — some on tripods — waiting for Nikita’s giant, cream-colored head to emerge. Soon, it does. Shutters go off, fingers point.

Below the water, adults and children crowd around the glass — some speaking German, some Spanish — waiting to catch a glimpse of the bear. As he glides past, a toddler shrieks, “Look, Mommy!”

Nikita places his paws on the glass. Curious, Oona puts hers on the other side to compare. Of course, his paw eclipses hers by about fivefold.

Camera phone buttons come alive as Nikita erupts out of the water, massive bubbles streaming from his nose.

Everyone, including Nikita, is smiling.

It’s not an everyday sight. It’s definitely not a typical North Carolina sight. And yet, in Asheboro, it is. 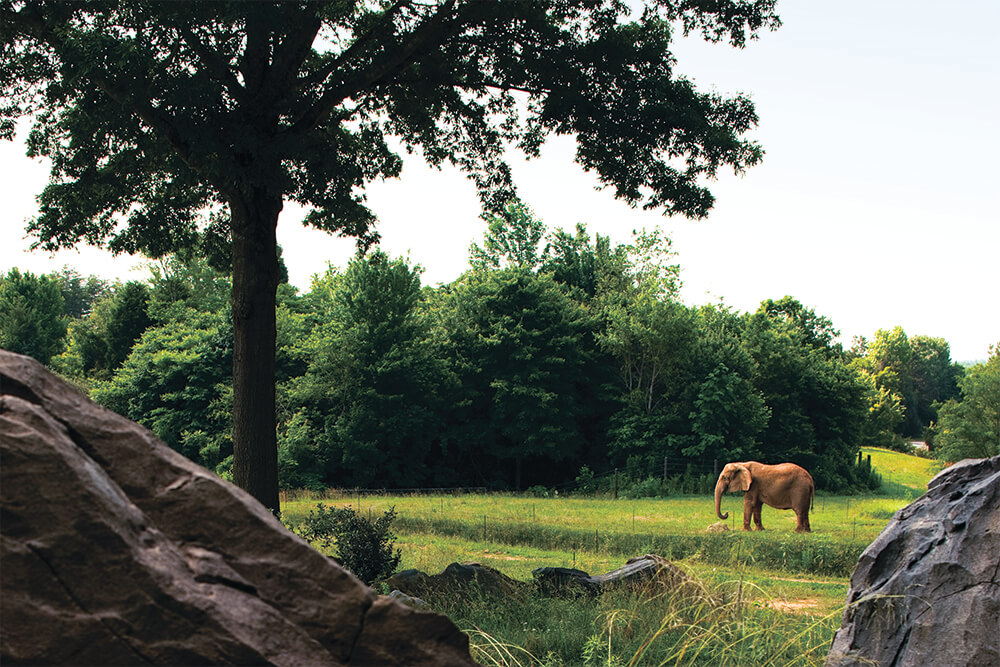 At more than 2,000 acres, the North Carolina Zoo is one of the largest zoos in the world, giving the elephants — and every other resident animal — plenty of room to roam. photograph by Patrick Schneider

No one would dub North Carolina “Polar Bear Country.” Here in Asheboro — smack-dab in the middle of the state — the biggest mammal residents are likely to see is a steer. Travel east or west, and North Carolinians might see Nikita’s distant cousin, the black bear.

But at the North Carolina Zoo, guests can visit the Arctic Circle in both the icy winter and the humid summer months.

You have to wonder if this diverse and welcoming place is what Raleigh civic leaders envisioned 50 years ago, when the seeds of a state zoo were first planted.

Or when Asheboro industrialist W. David Stedman raised $435,000 — the equivalent of $5.50 for every man, woman, and child in Randolph County, as he said at the time — and joined Asheboro attorney Wes Moser and local artist Dwight Holland in presenting to the Site Selection Committee their proposal to develop more than a thousand acres south of town, at Purgatory Mountain.

Or when Moser’s daughter, Marjorie “Missy” Moser Rankin, skipped school to be a part of the push for the zoo.

Zoo visitors from around the globe trek between continents, from “Africa” to “North America.”

Or when, after the committee chose Asheboro, the zoo’s first director, William “Bill” Hoff, oversaw the master plan for the zoo in 1973.
When the Interim Zoo officially opened on August 2, 1974, there was no mystery about what purpose it would serve. North Carolinians, hungry for a zoo and fascinated by the first resident animals — a pair of Galapagos tortoises named Tort and Retort — had already flocked to the site by the thousands, catching zoo staffers off guard. And the throngs of visitors weren’t just locals.

As with any new project, there were setbacks. Things didn’t always go according to the master plan. Funding was hard to come by. But, with the help of local legislators, the zoo became a total natural habitat park in October 1983.

It was hard, back then, to resist catching a glimpse of tree kangaroos, ostriches, a rhinoceros, caracals, and a gorilla named Ramar.
Skip to 2015 and early 2016, when the zoo saw its highest attendance in 19 years and the highest mark for N.C. Zoo Society memberships. People came to Asheboro from near and far to see the zoo’s more than 50,000 plants and 1,600 animals.

Including, and especially, Nikita.

At first glance, Nikita is definitely a bear out of water in the South. His native habitat is thousands of miles to the north. The 10-year-old arrived in the Tar Heel State in January 2016 from the Kansas City Zoo in Missouri, where he had lived since he was 3. And by birth, Nikita is a Yankee, hailing from the Toledo Zoo in Ohio. Barbecue, coleslaw, hush puppies, and sweet tea are hardly his ideal supper. 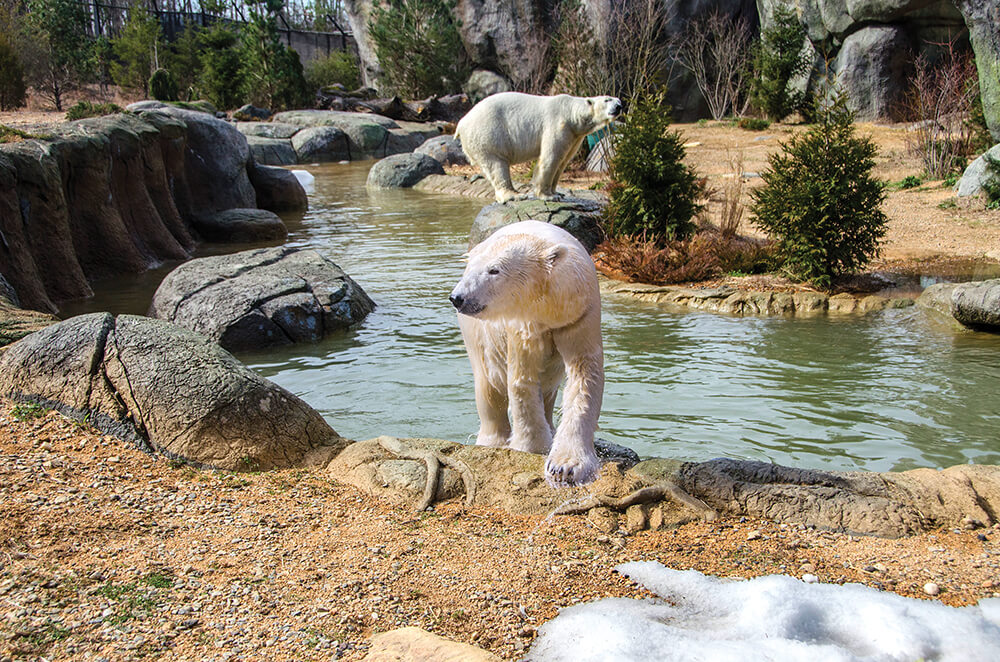 With help from his companion, Anana (foreground), Nikita the polar bear has made a home at the North Carolina Zoo in Asheboro. photograph by Paul Church

Still, as Nikita makes his way through his rocky habitat along with his companion, Anana, the big bear looks right at home, swimming and finding fish and treats that keepers have left for him around the newly renovated polar bear exhibit that spreads over half an acre.

In Asheboro, many newcomers (humans and bears) have made the recently named All-America city home.

Not everyone stays. Cars and trucks pass through the crossroads town every day on Highway 64/Dixie Drive going to and from Charlotte and the Triangle. At the intersection with Zoo Parkway, instead of going south to the zoo, visitors and natives alike might turn north onto Cox Street toward the historic part of town.

Even in the heart of downtown, it’s impossible to forget the zoo. Next to the train tracks rises a polar bear mural painted by local artist Susan Harrell. Multiple businesses proudly tout the zoo in their names: Zoo City Drug, Zoo City Bargain Outlet, Zoo City Motor Sports Park. Nearby at historic McCrary Park, the center field fence features an ad for the zoo — a swimming polar bear with a red ball: “Play ball!”

When the zoo celebrated its 40th birthday, Rankin, now a member of the NC Zoo Society’s board of directors, told the Asheboro Courier-Tribune that her father wanted the zoo not to be “just about animals, but the people, too. It would enrich the fabric of life in this community with the employees and their science backgrounds and caring for the animals and plants. … Our zoo is teeming with life now — globally, too.”

In the zoo parking lots, license plates represent Ontario and Florida, California and North Carolina. At the entrance, accents range from Middle Eastern to European to South American to Asian to Asheboroan. Inside, these visitors from around the globe will trek between small-scale continents, from “Africa” to “North America,” where Nikita lives at the “Rocky Coast” exhibit.

Not far from Nikita, the “Streamside” exhibit feels more familiar. Oona’s favorite barred owl stares down at us, otters frolic, an eastern diamondback rattlesnake naps in a coil, and turtles paddle around, just a quarter-inch of glass away.

On the way to the elk and bison prairie, we catch a glimpse of two of the resident black bears — natives in their native zoo. But Oona is tired and talking lunch. As we leave, crossing the bridge over the marsh, more people are streaming in.

“What do you want to see first?” a father asks his son, who’s eagerly running across the bridge.

Must-Do at the Zoo

The animals are the main attraction, of course. But there are a few other things you shouldn’t miss on your next trip to the zoo. 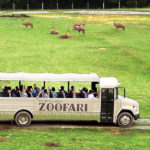 Zoofari • From April to October, a special “safari” bus takes visitors into an exhibit for up-close-and-personal encounters with gazelles, ostriches, rhinos, and more. 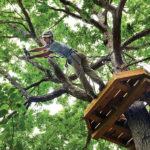 Air Hike Ropes Course • Make like a monkey and scamper through the trees. (Unlike the monkeys, humans wear helmets and harnesses.) From April to October, Air Hike tests balance and increases self-confidence. 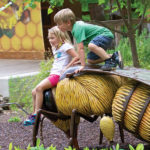 Zoo-Wide Exhibits • Every inch of the zoo is intentional in its design, mostly to keep the animals healthy and happy. But some of the exhibits, like this fiberglass worker bee, are educational — and just plain fun.