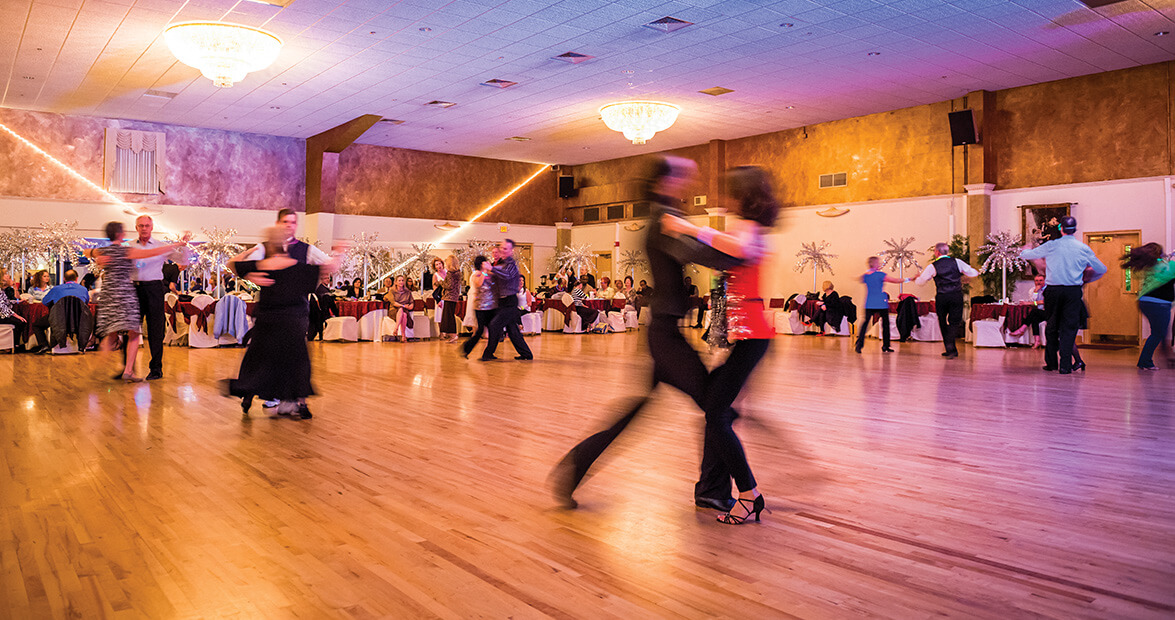 Couples slide across the floor of the Asheville Ballroom in quiet succession. Women shake their hips. Men hold their backs straight. The dancers’ chins are high; their feet are rhythmic; their minds are free.

On a Friday night, the ballroom is a place where dancers show personality. They glide elegantly during the waltz, dip backward to the tango, do the cha-cha in tall heels. They count steps: one, two, three, four. Rock step, march, march, rock step. Back, side, together.

They do all this in one of the finest ballrooms in the country — 6,000 square feet of pine floor with cushioning beneath, a state-of-the-art sound system, golden chandeliers hanging low from the ceiling.On Fridays or sometimes Saturday every week, people dance the bolero, salsa, and fox-trot. They float along that pine floor and let the stress of the week fade into the music.

You don’t have to know the box-step basics to dance at the ballroom. Jim Rentz didn’t know when he first began. The 87-year-old World War II veteran has two artificial knees and is hard of hearing. His timing is slower; sometimes he’s out of rhythm. But on the first Friday night dance of the summer season this year, Rentz is on the floor dancing the fox-trot with a beautiful woman wearing spiky gold heels.

The dance series has become a haven for many people, a place to escape stress and have fun. When Rentz’s wife died of breast cancer 21 years ago, he thought his days of fun had ended. But one day, he came to the dance hall. And he stayed.

“This is what happened to me when my life was over,” he says.

For seven years now, Rentz has been one of the Friday night stars. He’s now an exhibition dancer, donning costumes and winning dance competitions. He has a special bag for his shoes and places them with the soles pointed in so he doesn’t scuff the shine. He just completed his medals program for the full-bronze waltz, and passed. His instructor at the ballroom, Judyanne Campbell, choreographs his dances and meets him for lessons every Wednesday. Rentz can’t hear the music well, so Campbell pulls him by his belt loops around the dance floor to keep him in rhythm.

Over the past 12 years, the Asheville Ballroom has earned a national reputation for its world-class design and its competitions. Dancers who have won contests such as the Australian “Dancing with the Stars” teach here. Students fly in from across the country to take lessons here. The director, Kem Overby, has recruited teachers from Turkey. Some instructors have titles such as swing specialist.

Overby, who also runs a dance company called “Dr. Dance,” began dancing in the ’70s when he wanted to impress girls. He practiced steps to “Soul Train” and “American Bandstand” in his parents’ basement, and when he couldn’t find a job after graduating college, his girlfriend got him a gig at the dance studio where she was a student.

“Disco is what I did, and for the first 20 years, Daddy asked me when I was going to get a job,” Overby says.

In 2000 — after being ranked one of the top professional/amateur teachers in the Southeast for 20 years — he began teaching Kathy Corn, an Asheville newspaperwoman. Corn showed him an old warehouse in the eastern part of the city that had yellowed papers stacked in piles. There was a basketball goal in one corner, and her kids sometimes played ball there, their steps echoing across the concrete at night.

Corn wanted a dance studio. She told Overby she’d pay whatever it took to transform the drafty, 6,000-square-foot warehouse. Overby gathered bids for a floor cushioned with foam beneath the boards, which is easier on the legs and feet, and a rolling bar.

In 2001, the week the ballroom first opened, Overby had 14 students. But his philosophy of teaching — “make sure the students are having fun” — helped the word spread at a rapid-fire pace. At one point, the weekly group lessons grew to include 800 people. Teachers began calling him. They wanted to dance in the elegant setting.

“This is the most beautiful ballroom I’ve ever seen,” Overby says, “and I’ve been in ballrooms all over the United States.”

Campbell was one of the instructors who wanted to work here. Campbell, who’s been dancing since she was 5 years old (she’s now 59), grew up in New York. After she moved to Asheville and began working as a radiologic technologist at a local hospital, she learned about the ballroom and began taking lessons to learn a new dance style. She approached Overby about becoming a teacher. After a while, she and Overby began competing, then Campbell finally started teaching others.

She found herself packing dresses and dance shoes in her work bag on the weekends when she pulled three 12-hour shifts. “I’d work all day Friday, all day Saturday, then go to the bathroom to change into my shoes,” Campbell says. “I danced all night and was back at work at 7:30 a.m. on Sunday. My coworkers thought I was crazy. But we’re all dance junkies.”

Six years ago, during a group lesson at the ballroom, Campbell was paired with Rentz. After they danced, she was honest and told him his mistake: He hadn’t led.

But Rentz enjoyed her authoritative nature. Campbell reminded him of his late wife, June. He hired Campbell as his private instructor and began taking lessons. Soon, Campbell was leading Rentz around the dance floor by his belt loops when he was practicing and couldn’t hear the music. She kept him in rhythm like others previously couldn’t. He learned to read her lips and listen while they danced. His steps improved, and he began competing. Now, they frequently win first place in the professional/amateur category.

Rentz pulls out the photos in his wallet. The pictures show the two of them, his left arm around her waist, their sailor caps on, the flash catching the immaculate white costumes. In another photo, Rentz is leaning Campbell back in a dip. Her fuchsia ball gown matches her lipstick. He carries a small version of this photo on his keychain, too.

“I could never take lessons with anybody else,” he says. “I wouldn’t wanna. I tell her, ‘I was married to someone like you for 45 years, so I know what you’re thinking.’ ”

Dance has not always been a consistent activity in Rentz’s life. He grew up in Pennsylvania and joined the Army. His girlfriend, June, started writing letters to him while he was overseas and the couple married when he returned. They moved around the Northeast, settling in Westchester County in New York. In the 1980s, they found a book about retiring on little money that pointed out Hendersonville as an affordable option. They decided to move South.

Within six years, June developed breast cancer and died. Rentz leans in to tell this story, his body turning to face you on his left side so he can hear your response in his good ear.

“I had been married 45 years, see, so my life was over,” he says. “Six months went by and the ladies at church said, ‘you gotta start socializing. We have a dance group, and you’re going to come.’ ”

But Rentz didn’t go. The women picked him up. They made him dance. About a year into it, he saw an ad for Fred Astaire Dance Studio and took a lesson. He liked it. In 2006, he started lessons at the Asheville Ballroom. He hasn’t missed one since.

At the ballroom, the night is winding down. There is no alcohol around to loosen people up. People snack on watermelon and chocolate chip cookies. About 30 minutes til 10, a fast pop song begins playing, and Rentz leans back in his seat. He pulls out a handkerchief and wipes the sweat off his forehead. “I’m too old for this one,” he says.

Around the dance floor, skirts flare and laughter spreads through the place.

Michael Bublé begins crooning “Fever.” It’s the first waltz mixer of the night. Rentz stands and stretches his arms behind his back. “This is my swan song,” he says. The women are on the left, the men on the right. When Rentz walks to the middle of the floor he meets the young woman wearing gold heels. As they move down the line, an observer cannot notice an age or skill difference. For a few moments, Rentz is just another man, dancing happily to a beautiful song.