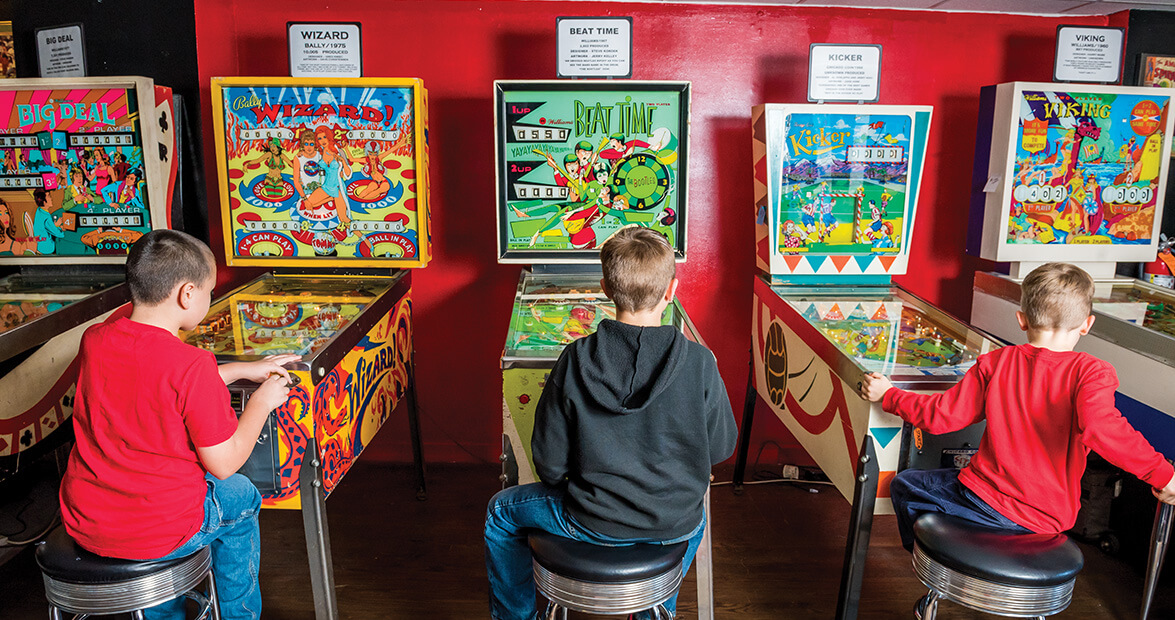 Before telling you whether I actually scored a goal in the Ice Fever pinball game (circa 1985, only 1,585 ever made), I should explain why I was in the Asheville Pinball Museum in the first place. One of the daunting things about getting old is how quietly stuff — your stuff — becomes outdated and obsolete and, most of all, forgotten.

Take phone booths. They don’t really exist anymore except as photo props in London. This hit me hard recently when, as a family, we watched the old Christopher Reeve Superman movie. There’s a little joke in the movie — a killer joke when I was young — where Clark Kent is looking for a phone booth to change in, and he comes upon one of those newfangled 1970s half phone booths without a door. He grimaces and searches for another place to become Superman. I remember the theater when I first saw it: screams of laughter.

There is too much stuff like that, stuff that was such a big part of my life, stuff that I expected would last forever — Saturday morning cartoons, taping songs off the radio, video stores, electric football, actual paper letters that came in mailboxes. That stuff, to my daughters, isn’t just gone, but ancient and silly and lost in the dumpster of pointless history.

All of which is a way of saying: My daughters had never played pinball. And something had to be done about that. 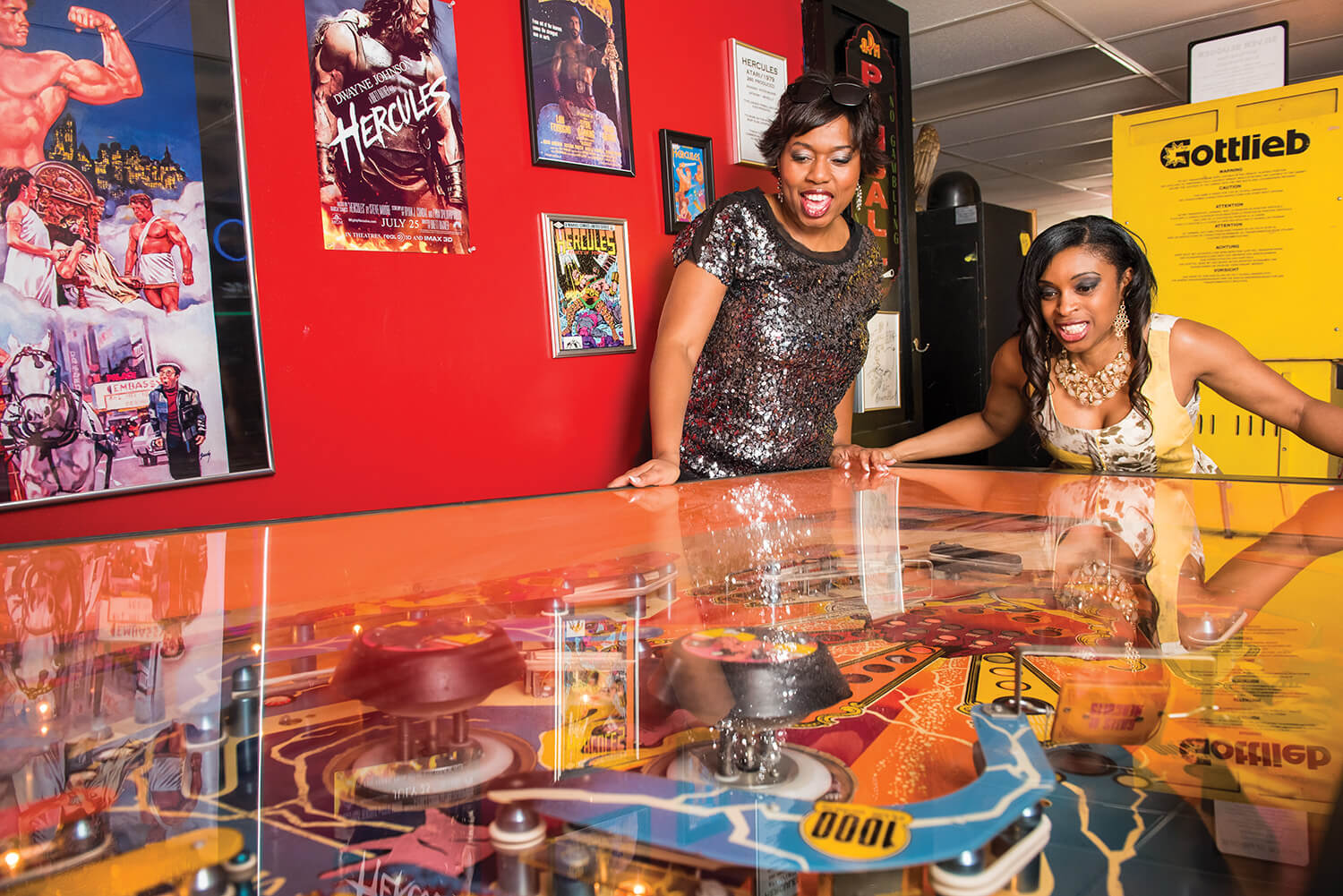 Pinball, as you might know, was illegal in America for years. The reasons for this now seem hopelessly turn-of-the-century naïve, like something out of The Music Man. But the ban lasted a long time, well into the 1970s. In New York City, G-men would take axes and destroy the machines in actual pinball raids. Even when I began playing, there was still a whiff of danger about pinball machines.

The main objection seemed to be that pinball was considered a game of chance, like roulette or craps or other devil games. In the early days, there was actual gambling in pinball — you played to win money. But even after the gambling elements were removed (I still remember the “For Amusement Only” signs that were required), pinball machines were outlawed. Fiorello La Guardia, mayor of New York City, was particularly staunch, calling pinball machine operators “slimy crews of tinhorns, well dressed and living in luxury on penny thievery.”

It took a writer and pinball machine designer named Roger Sharpe to change things; Sharpe famously played pinball before the New York City Council in 1976 to prove that it was a game of skill. The turning point happened when he predicted and then made a remarkable shot, pulling the plunger and dropping the ball into the middle alley. This shot — somewhat bizarrely — convinced the council to legalize pinball machines in New York. Subsequently, they were legalized almost everywhere else.

To be clear, I learned exactly zero of these pinball facts at the Asheville Pinball Museum. It’s not that kind of museum. Instead, it’s a walk into childhood. For $12, you can play every one of the 30 pinball machines all day long.

“Museum,” owner T.C. DiBella says, “is kind of a funny word for the place, I know. But, you know, arcade is a funny word, too — it just means a covered walkway on the street. The arcades we grew up with weren’t technically arcades.”

DiBella was a middle school social studies and science teacher for 22 years in North Carolina, and he grew up at the arcades just like I did. For fun, he had three pinball machines at his house; they always made people happy at parties. One day, when the politics of education overshadowed the joy he found in being a teacher, he opened his Pinball Museum in downtown Asheville. It makes him happy. He likes to wander around the room, free up balls that get stuck, show people hidden tricks for each machine, and see the way people’s eyes widen when they see pinball machines they played as children.

“So many pinball collectors tell me that this was their dream,” DiBella says as he happily looks around his crowded museum. “But I don’t think they could have handled so many people playing their collection. I think that’s my advantage; I’m not a collector. I don’t see this as being a priceless artifact. It’s a game. It’s meant to be played.” 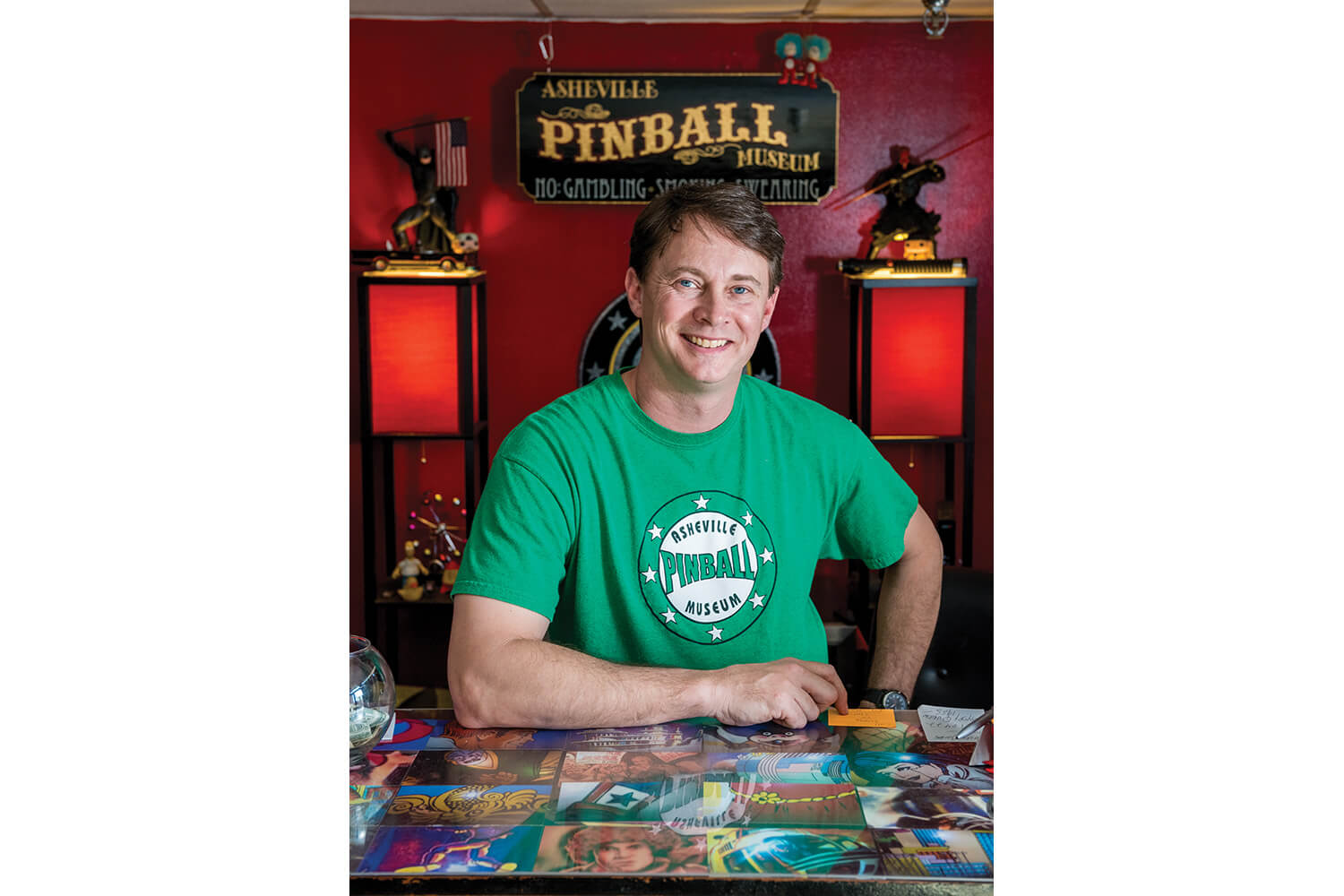 There’s a noise that pinball machines make, a combination of cracks and thuds and bells and beeps, that sound to me like a summer song. Yes, that’s music I hear when a quarter is placed on the glass, signifying “I got next game.” I still see the girl, the girl in braces, the one I have a crush on, and she’s standing next to the table, and my only means of impressing her is to save the ball that seems destined for the channel between the flippers, and then hold it for a couple of seconds with an upright right flipper, and then unleash the shot that leaves her dazzled and hopelessly infatuated …

This is why I’m drawn to the Ice Fever pinball game, a hockey pinball game from my time. Though I’ve probably never played this exact machine before, I’ve played a thousand others just like it. There are much cooler pinball machines here in the museum. There are a few old ones from the 1960s. There’s an Addams Family model that is, by most measures, the most popular pinball machine of all time. There are machines for every science fiction story ever told — Star Wars, Star Trek, Terminator 2, Judge Dredd — and there is a Beat Time machine that is a blatant Beatles rip-off. There’s Hitter’s Rally, a baseball pitcher-hitter pinball machine that I personally kept in business with just about every quarter I ever made from my paper route.

And there is Hercules, a pinball machine so massive my daughters have to play it in tandem because individually they cannot stretch out wide enough to reach buttons for both flippers. The ball in Hercules is a cue ball from a pool table.

But Ice Fever is the game I settle on because it has one particularly cool feature: a pinball lodged in the upper left-hand corner. If you hit this pinball just right, you score a goal and — DiBella promises — the machine lights up in a special way. He makes this special lighting sound like it will be more spectacular than the fireworks show they had at the Beijing Olympics.

Unfortunately, to score a goal, you first have to clear out a series of targets just to give yourself an open shot. These targets only stay down for a few seconds. Then they pop back up, and you have to start all over again. Even if you do get a clear shot before the targets pop back up, you have to hit the lodged pinball precisely, and I mean precisely. A millimeter right or left is no good. In other words, scoring a goal in Ice Fever is impossible. You need to be the deaf, dumb, and blind kid from The Who’s “Pinball Wizard.”

At first, I admit, scoring a goal in Ice Fever is just a lark. It doesn’t really matter to me. The whole point of this adventure is to introduce the girls to pinball, and they love it. Elizabeth and Katie run around the museum happily, jumping with my wife, Margo, from a pinball machine that shoots 10 pinballs at you at once to The Flintstones machine to the Twilight Zone machine. They also play a few of the video games I used to play obsessively, like Galaga and Ms. Pac Man (it was always Ms. Pac Man for me; she was far superior to her less athletic husband … and she followed her own path even after they were married).

DiBella walks over to offer a helpful tip or two. I clear the targets one more time. “OK, now let’s see you hit the target,” he says. I hold my right flipper steady. Everyone disappears. Time stops. I see the girl in braces, and I hear the melodic cacophony of pinball machines jingling, and I unleash the shot. It hits the pinball on the nose, sending it shooting up the tube and into the goal.

“Goal!” I shout, probably too loudly, and DiBella pats me on the back like I’ve actually just scored a goal in the Stanley Cup Finals.

I look at him as if awakened from a dream. I pause and think of the right thing to say.

This story appeared in print as “Pinball Wizards.”