Thank heavens we never needed the old bomb shelter at the Executive Mansion, but one North Carolina couple spent three nights in the cramped space 60 years ago and, um, had a blast.

In April 1961, Charlotte newlyweds Tom and Barbara McAden became human guinea pigs, agreeing to test-drive the new shelter and share their reactions as part of a civil defense demonstration called Operation Alert. The Cold War had spawned a bomb shelter boom — pardon the pun — and state officials wanted to show off the livability of the governor’s new postapocalyptic digs. 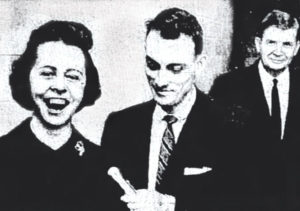 After three days in a bomb shelter, Barbara and Tom McAden were offered hot coffee, fresh doughnuts, and a stay in Gov. Terry Sanford’s suite at the Sir Walter Hotel in downtown Raleigh. photograph by THE APRIL 28, 1961 EDITION OF THE HIGH POINT ENTERPRISE

For some 72 hours, the living was austere in the 8-by-8-foot cinder-block room in the mansion’s basement: No electricity. Only bottled water. No contact with the outside world except what they heard on a battery-powered radio. The couple ate military-like rations cooked on a canned-heat stove and drank warm sodas. They slept on bunk beds and sat on folding chairs. They had no newspapers but brought reading materials to help pass the time. Tom shaved with no mirror. The only concession? They could leave the shelter for bathroom breaks.

After three days, the McAdens emerged from their darkened dungeon, blinking incessantly but smiling. “Three days in there with someone you love isn’t bad,” Barbara told reporters. “But with an enemy, it probably would be terrible.”