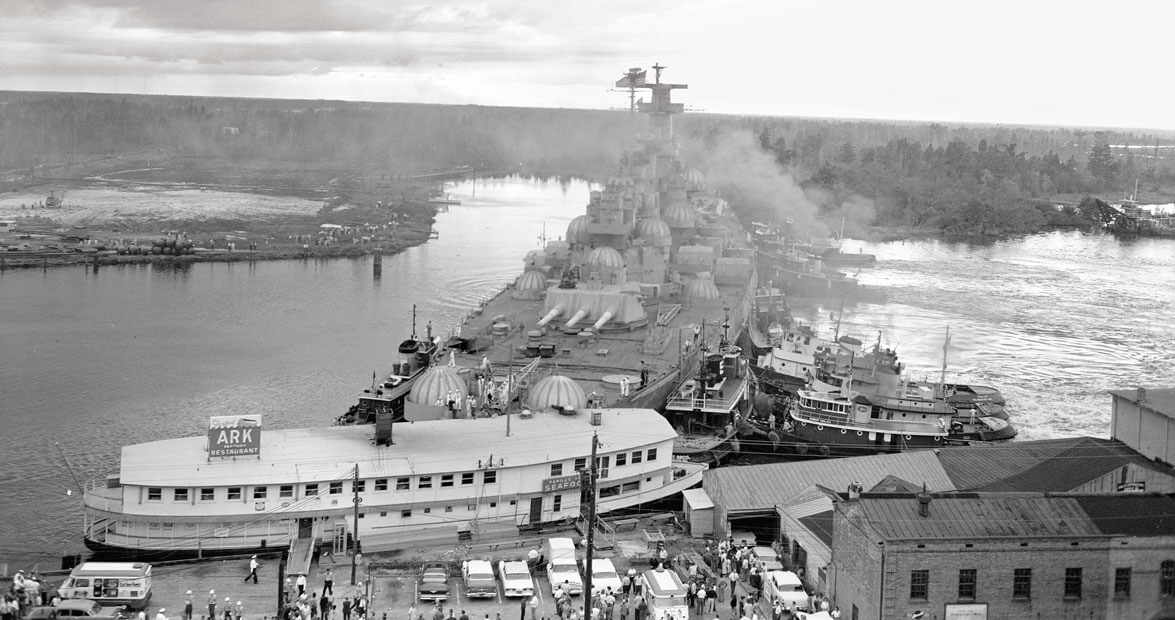 Simple math will tell you just how hard it was to back the USS North Carolina into its permanent parking space across the river from downtown Wilmington. The battleship is nearly 729 feet long. The Cape Fear River was, at the time, only 500 feet wide. And it didn’t help that a large, concrete-hulled floating restaurant was in the way. I think you can guess what happened next.

On October 2, 1961, the USS North Carolina hit Fergus’ Ark seafood restaurant. Not very hard, mind you, but still, even a glancing blow from a warship is bound to leave a mark. The problem: The bow of the ship got stuck in the muddy riverbed, causing the stern to swing around in an arc. The resulting collision with Fergus’ Ark sounded to one observer like “crumpling paper.” Guns from the stern’s turret poked into the walls of the Ark’s galley. Stoves slid around. The moment was spectacular, but the damage, actually, was minor, like a walrus backing into a seal.

The owner of Fergus’ Ark, Eldridge Fergus, was standing on the stern of his restaurant, watching the spectacle, and noticed the North Carolina getting uncomfortably close. Someone told him to jump. He did. And then he sued.

Fergus wanted $25,000 in damages from the USS North Carolina Battleship Commission, but he settled for $3,000. Here, two stories emerged: one from Cape Fear River pilots and others, who said that Fergus deliberately parked the Ark in a spot where it would likely be hit, in order to get that sweet lawsuit cash; and the other from Fergus himself, who would later say that this wasn’t true — he’d disconnected the water and power and was waiting on a tugboat to move the restaurant out of the way. The tug never came. The boats were all busy moving the battleship.

Fergus already had some experience in unwanted military nudgings: In 1955, the Ark had been hit accidentally by a visiting Navy submarine. After this latest incident, the restaurant reopened within weeks, and Fergus painted a Purple Heart on the exact spot of the collision. He went on to claim that this was the only known case of a U.S. battleship ramming a restaurant in U.S. waters — which, really, doesn’t seem so far-fetched.