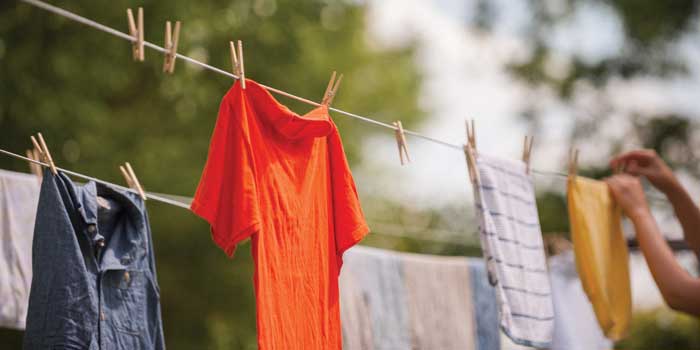 Through my early childhood,the washer was a necessity and the dryer was a luxury — nearly every family had a clothesline. I still remember ours. The line in the back of our house stretched from the crab apple tree to the pecan tree in the middle of the yard. We had a long, forked, wooden pole that we used to support the middle of the line when laundry hung from it. As kids, we ducked under the line when we ran through the yard or played catch.

This clothesline stayed in place until 1989, when Hurricane Hugo blew down the pecan tree along with a dozen or so other trees in our yard. When my schoolteacher parents, William Ivey Long Sr. and Mary Wood Long, took our family to our house in Manteo, one of my first chores was to take the coil of slightly mildewed clothesline rope from the screened porch and tie it in between the pine trees in the backyard. That clothesline saw a lot of action. To this day, leaving the pins on the line seems almost naughty.

My brother William, the Tony Award-winning costume designer, remembers the clothesline fondly. A longtime costumer at The Lost Colony production taught him about the importance of drying costumes on the line. “To this day, I still use [her] clothesline techniques whenever possible,” William tells me.

In spite of my early affinities with our backyard lines, the clothesline was a thing of the past for me as soon as I left home for college. The neighborhood Laundromat became my laundry of choice for the next 20 years, followed by the washer and dryer in the basement of my first home. I thought of the clothesline as a relic of my childhood to which I would never need or want to return. (Story continues below video.)

In the 1950s, clothes dryers and air conditioners drove us inside our homes, leaving backyard clotheslines and front porches as reminders of a time long gone. Before that, the clothesline provided quiet opportunities for an older generation to pass something to the next generation. My children didn’t learn much from watching me stuff the wet laundry into the dryer. I began to see how modern conveniences could take away: As the clothes dryer evolved from a luxury to a necessity in American culture, a valued part of everyday life was left behind.

A generation ago, the backyard clothesline prompted conversations between neighbors. People shared recipes, discussed homemade remedies. The garments hung on a clothesline and how they were hung told neighbors the size, age, adult occupation, economic status, and tidiness of the new family that moved in.

My wife, Anne, and I blended our families a dozen years ago, and we began preparing clean laundry for seven young children. I took the role of collecting, washing, drying, folding, and distributing the laundry, while Anne handled the more thoughtful and demanding work. About eight years ago, I needed to figure out a way to keep our new dog, Rosie, an energetic Border collie-and-spaniel mix, from following the kids to school. I found a 50-foot-long dog run at the hardware store and strung it between the side of the house and a poplar. The run consisted of a length of plastic-covered wire, with a shorter wire hanging from a pulley that rode up and down the run, allowing Rosie to run back and forth in either direction. Rosie and the dog run didn’t get along, and Rosie won. On an early spring day, I thought our newly washed socks and underwear might dry faster in the dryer if they didn’t have to compete with the blue jeans and sweatshirts. I scrounged up some clothespins and took a heavy basket of wet jeans, towels, and T-shirts out the side door. Without much thought, I hung the load of laundry on Rosie’s old dog run.

Over the next few months, I began to use the line about once a week. Each time I took a basket of wet laundry outside, I thought, “But it’s easier to use the dryer.” Sometimes the clothes got wet from a rain shower. Occasionally, I forgot to bring the clothes in until after dark, and I held a small flashlight in my mouth while I unpinned the clothes dampened with dew.

Still, I kept my clothesline “thing” under wraps. I saw each new basket of laundry as an organizational challenge. I concocted theories about how to hang the individual pieces to create the best opportunity to dry. Pants and shirts dried best if hung upside down. I looked for ways to hang the wet clothes more quickly, using fewer clothespins. My clothesline work began to resemble a time-and-motion study.

My quest was good for a couple of months. I knew it was time to seek some advice from Anne; I summoned up my courage and confessed. I expected her to laugh, but she didn’t. “I know,” she said, “and it is so good for the children to see you doing this. After all, we’re modeling our behavior and showing them the value of household work.”

Now, I had an audience.

Color became as important as clothing type in the sequence of hanging. I experimented with color sequences, as well as with the size and shape of the article. I concocted my own Code of Clothesline Ethics — I would not manipulate the contents of the laundry basket for my own creations. I would accept whatever came out of the wash. I began my quest to discover the air-drying technique that would keep the kids from complaining about scratchy towels, which to this day I am still trying to perfect.

A year into my clothesline quest, I carried the laundry basket outside and reached down to grab the first piece. I brought up a red T-shirt and hung it on the line. Not knowing exactly what my artistic point of view was that morning, I pulled up a lighter piece of clothing, followed by a pair of orange shorts. Keeping in mind my basic knowledge of color theory from a high school art class, I picked out a yellow T-shirt. I began to feel a trickle of apprehension. ROY G. BIV. Red, orange, yellow, green, blue, indigo, and violet — the colors of the rainbow.

There was no stopping me now.

Folk history suggests that sailors invented the clothesline; they had rope, knew how to tie knots, and didn’t have a convenient riverside bush or boulder on which to dry their clothes. They also had time to whittle the first clothespins, to pass the time during the doldrums.

But no one knows who really created the first clothesline.

Laundry dries in the dryer for the same reason that laundry dries on the clothesline: evaporation. Wet fabric dries as the water molecules turn into vapor and leave the fabric. Heat and motion assist with the evaporation. This is why laundry dries faster on the line when it is sunny and breezy, and when the humidity is low. Laundry might not dry if it is sunny and breezy with 100 percent humidity; there is nowhere for the water molecules to go. Laundry will dry when it is freezing and especially if there is a breeze, as long as the humidity is low.

Even in the winter of 2011 — one of the coldest winters on record — our clothes dried on the line.

Laundry on the clothesline will dry almost anywhere, given a chance.

Several years passed before I told friends that I was using the clothesline, and when I did, I spoke of it as a joke. But my friends didn’t laugh. They, too, appreciated the clothesline.

My friend Neil lives down the road in the old Mill House. He’s lived here nearly 40 years since he moved to North Carolina to study philosophy at Duke University. When Neil was growing up in Buffalo, New York, a woman down the street hung her sheets out in the fresh air in the wintertime. Of course, they were frozen stiff as plywood.

“In the afternoon, she would march out to the backyard, give them some karate chops, and angle them in the door to take to the basement to let them thaw out,” he says. “She never used the dryer for sheets.”

In North Carolina, Neil discovered he could hang clothes on the line year-round. He hangs clothes at 11 a.m. in the winter and gathers them at 4 p.m. “Hanging clothes outside to dry is close to a religious experience for me, peaceful and meditative,” he says. “No mechanical dryer could come close to giving me the satisfaction I get from my clothesline.”

Clotheslines had a profound effect on my brother, William. We grew up surrounded by fabric — costumes, old clothes, uniforms — and you must clean that fabric. Irene Rains, the former costumer for the Carolina Playmakers in Chapel Hill and the annual production of The Lost Colony on Roanoke Island, taught William more about the care of fabric than anyone. For more than 25 years, Irene was responsible for the creation and care of hundreds of costumes that actors wore nightly.

“Every dry and sunny day during the summer, her costume crew would string hundreds of feet of temporary clotheslines zigzagging across the backstage area of the Waterside Theatre,” he told me. “It was here that I first experienced the true art and beauty of clothes, and in this case costumes, being hung on lines to dry and to soak in the freshness of the summer breeze and the purifying sunlight.”

Last October, Anne and I visited our daughter Anna in Asheville. We met Anna at her house on South Grove Street, a few blocks from downtown. After a quick tour of her house, Anna told us she had something important for us to see. As she opened the door to her back deck, she pointed proudly to her new clothesline, which was strung between the house and a tree. On the line was a load of laundry. My mind fast-forwarded through images of my mother hanging clothes on the line, images of our bathing suits fresh from the beach dripping in the backyard, images of backyard puppet theaters, and my memory of Anne’s advice about setting examples for our kids. As I looked out over Anna’s backyard, I knew I had passed this on to the next generation.

I find such beauty in laundry hanging on a clothesline. I love to see fabric flapping in the breeze and to hear that particular snap of the sheets and pillowcases on a gusty day. So often I run across images of clotheslines and laundry in paintings, books, and movies. I continually look for clotheslines, whether in use or abandoned in backyards.

Every clothesline tells a story.

Robert Long is a 10th generation North Carolinian. He was born in Raleigh and graduated from the University of North Carolina at Chapel Hill in 1973. He received his MFA degree from Yale University. Robert spent 17 summers with The Lost Colony production. He resides in Chapel Hill with his wife, Anne, and consults on the design of performing arts buildings.