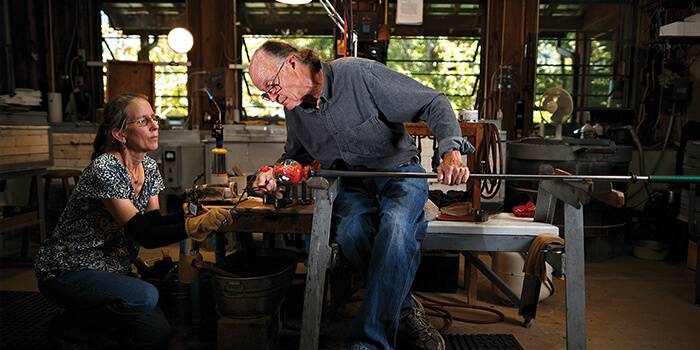 This man has been proclaimed a North Carolina Living Treasure, one of only 19 individuals to hold that honor. He has works in the permanent collection at the White House and the Corning Museum of Glass. This man, a glassblower, has been featured in more art magazines, retrospectives, and glossy catalogs; has won more awards; and is represented at more galleries and museums than space permits to list.

And this man has — egregiously — scattered several of his magnificent glass creations on the ground outside of his Bakersville studio to deter deer from nibbling his fig tree. He claims the creations are flawed. I am appalled. He laughs.

In the art of glassblowing, Richard Ritter does it all. He makes his own glass from silica “flour” — and indeed, that’s precisely what it looks like — and soda, potash, lime, and barium.  How could his one-of-a-kind, multicolored, magical objects come from such humble beginnings? He creates his colors — chrome red, cobalt blue — with oxides. (“A glaze on a pot is actually glass,” he explains.) Ritter blows bell-shaped “cups” that, arrayed on shelves against a sunny window, gleam like an indoor rainbow, and are just as fragile. He makes “rods,” long, thin canes like solid drinking straws, of every circumference and hue. Some have the diameter of a thread, nearly invisible to the eye. 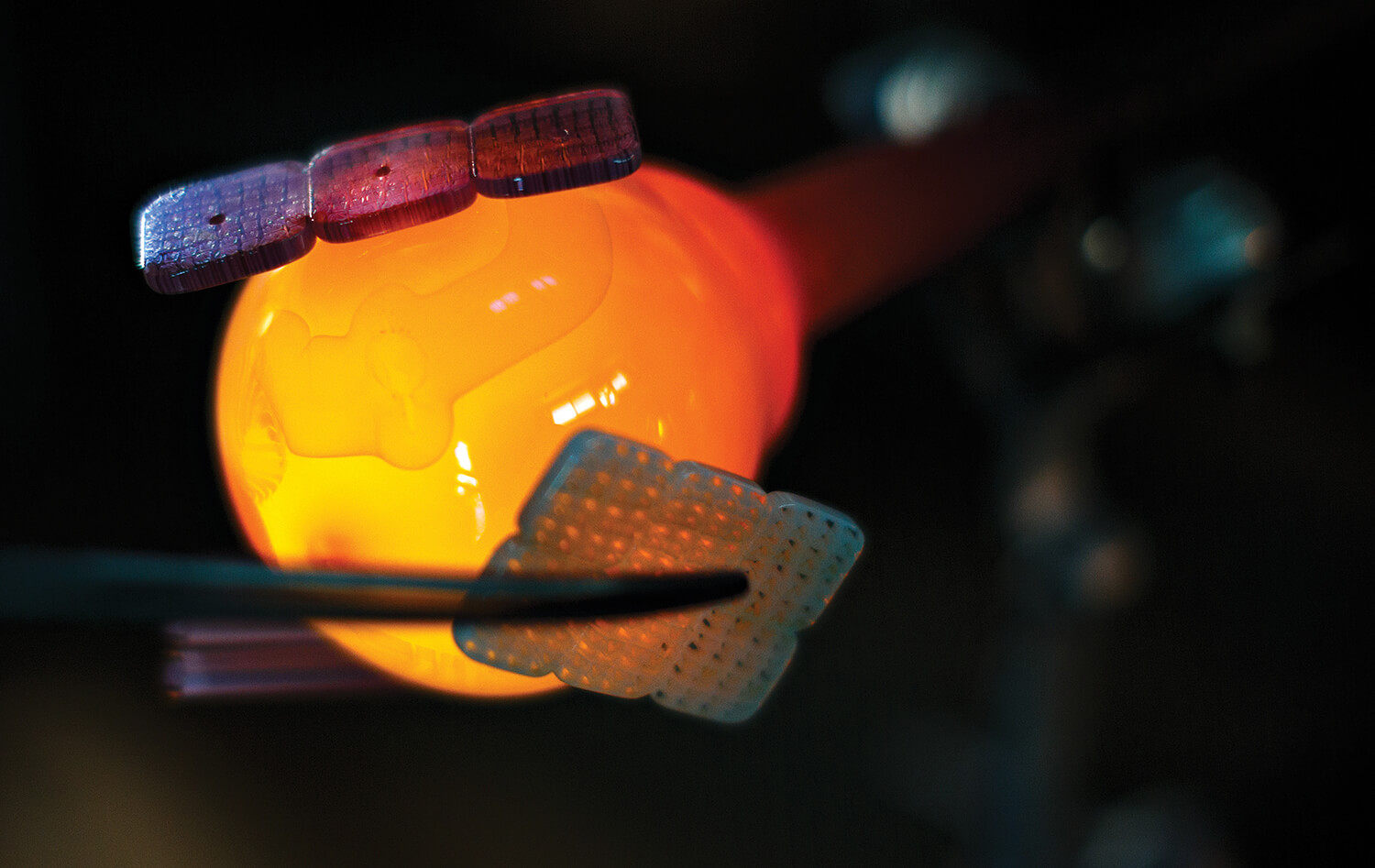 The rods are fused and, when sliced, become murrine, for which Ritter is best known. The murrine resemble precise flowers of every size and color, and they’re stored in tiny, stacked, labeled boxes throughout the studio’s “cold room.” Mostly round, the murrine look like magic itself: bright, Technicolor Willy Wonka confections, delectable enough to eat, smooth and invitingly touchable and alluring and smaller than a pinkie’s fingernail. Layer by layer, applying heat, Ritter “blankets” these decorative glass discs onto the cups, or crystal — which he also makes himself, and for which he requires a sand with no impurities whatsoever. Some murrine he’ll manipulate so they spread into color clouds and striations in variations of peach and yellow. Others he’ll attach to form dozens of blossoms, like a bird’s-eye view of a true flower garden. He may fuse others with a process called “latticino,” and the result indeed resembles lattice, as though he’s woven a tiny blanket or shred of textile. Placed side by side, the murrine will form a leaf, a dragonfly’s wings, a face.

A Michigan native, Ritter began as an advertising man and jewelry maker, and then, “glass came along and that was the end of jewelry-making.” His first glass pieces, from 1969, were blown from molten wine bottles, Stroh’s beer bottles, and milk of magnesia bottles. As a student at Penland School of Crafts in 1971, he could only get a “blow slot” from 1:30 to 4:30 in the morning. Such is the patience of a someone with a passion.

The artist’s “hot shop” section of the studio holds 10 kilns. Eight of them were constructed by Ritter himself. Each kiln has a different purpose. One is large enough to hold platters. One is for melting colors. One can hold eight solid glass apples. Here is the “pot furnace,” here are the blocking tools, and here is a wall of long blowers in multiple diameters. Blowing glass isn’t about having lung-power, or big cheeks, Ritter says. It’s about having control. His decades-old metal hand-tools are from Italy and Germany, and are irreplaceable, though they bear no distinctive markings or decoration of any kind, not even a designated handle. 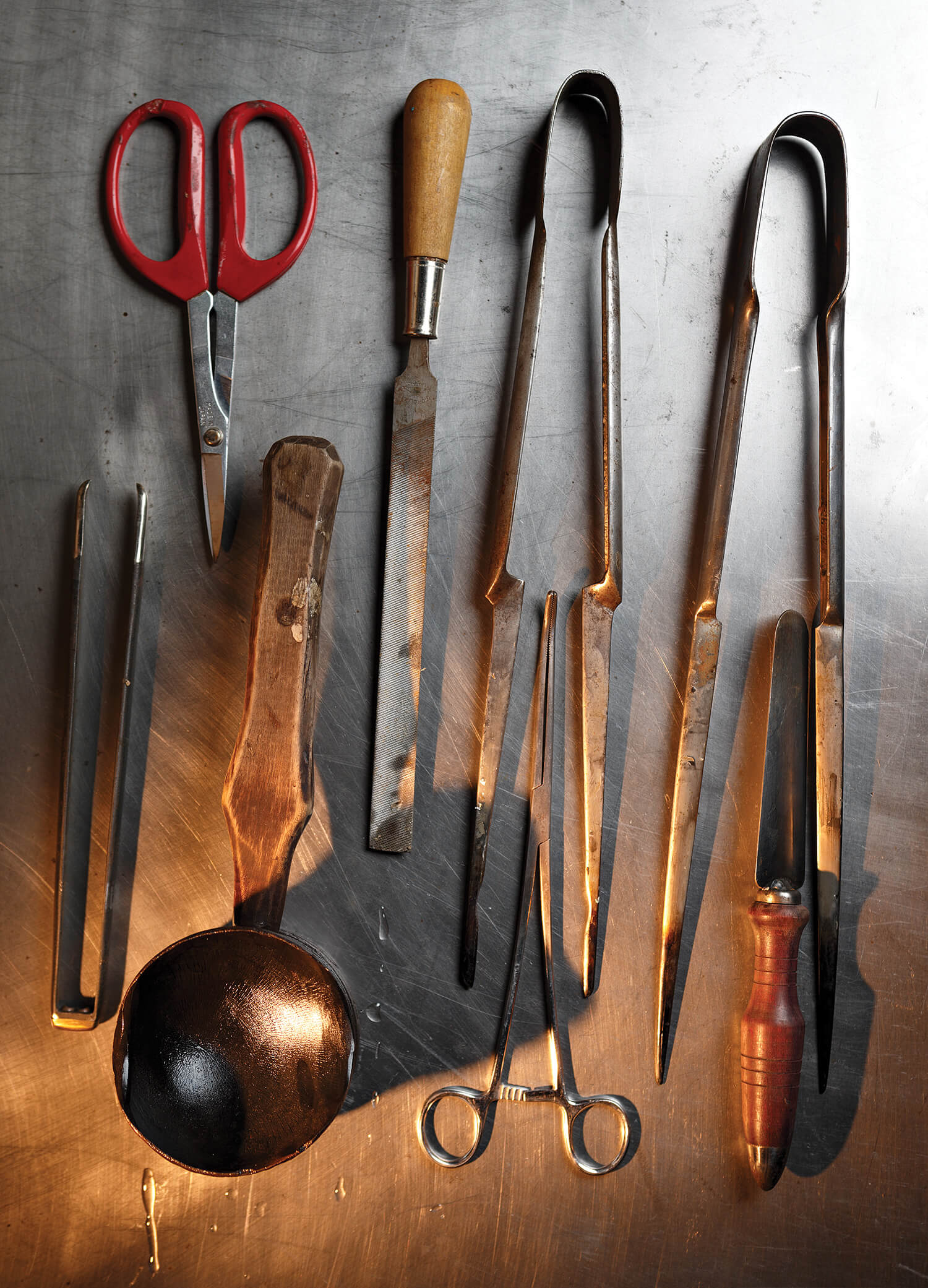 The precision required in such artistry is difficult to imagine. All glass is different, and has — get ready for terminology — “a high coefficient expansion.” In layman’s terms, this means glass will explode, or at the very least, crack, if too quickly cooled. A blown apple has a core seven and a half inches deep. It must gradually cool down from thousands of degrees, spending up to 21 days in the kiln, during which time the temperature is constantly monitored, “to take the stress out of it.” Ritter does the polishing, too, and two additional machines attend to that task.

A father of three, Ritter has saved one piece from each of his series — platters, eggs, apples, chalices — in a dimly lit, carpeted room at the back of the studio, for his children. Here are photographs of apprentices and mentors, of Ritter and Jan with the Mondales, the Clintons. Most arrestingly, here are examples of his “Floral Core” series. They look as though an otherwise dull metallic egg is breaking cleanly in half. The exposed contents of the egg are nothing short of spectacular. The smooth, rounded surface gleams and sparkles with an intricate interior explosion of flowers, of millefiori, as the Italians termed it. Thousands of flowers, whose appearance suggests a fantastic kaleidoscope view; a miniscule, fairy-tale Disney kingdom; a scientific cross-section of a microscope slide. You’d never, ever, get tired of looking at it. Never, ever see all there is to see in the multidimensional layers beneath the surface.

This 74-year-old man in jeans and with a ponytail is the creator of that singular, remarkable piece. He’s far more than simply “called.” He’s a living treasure.