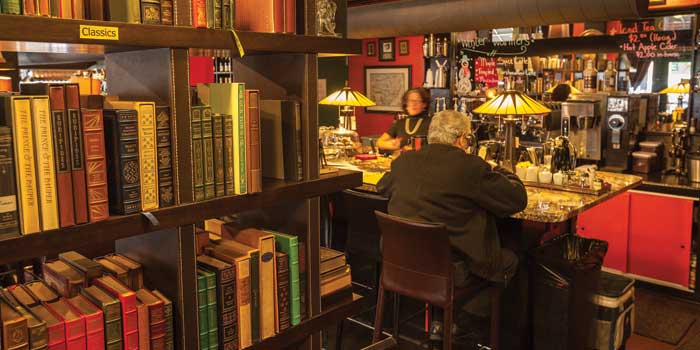 They call them browsing beverages here — the wines and champagnes and coffee drinks with names like the Doberman and the Plott Hound, the Carl Sandburg and the Thomas Wolfe.

You can take them with you as you wander through the books — around the corners, past the shelves, into the nooks and cozy sitting areas — as if you were circulating at a party. At the foot of a narrow staircase, a sign — “More books upstairs? Why yes!!!” — urges you up. You oblige. All of Battery Park Book Exchange is an invitation, and you’re here to celebrate.

After a long career in industrial chemical manufacturing and restaurant management, Thomas Wright wanted to do something different. In 2004, he bought a bookstore in Little Switzerland, and in 2009, he started the Battery Park Book Exchange in Asheville’s Battery Park Hotel, before moving to the nearby Grove Arcade in 2011. Wright knew that it would take more than books to pay the rent, so he added coffee, wine, and specialty snacks, like cheese and charcuterie, to the store’s offerings. The champagne, he says, was inspired by his wife’s love of sparkling wines.

Although they started out as a novelty and a financial necessity, the browsing beverages elevate this place. It’s not just another used bookstore; it’s a sophisticated parlor of a place, with rich, red walls and granite countertops. But the armchairs and ambient lighting make it comfortable, too.

“We try to celebrate literature through hospitality,” Wright says. “It’s a nice place where books and literature are honored.”

And, although he’ll tell you it was unintentional, he’ll acknowledge that the store honors Asheville. The stately furniture and the old books, the fizzy drinks and the fancy food — they call to mind the old aspirations of a city realized.

Once, Asheville dreamed of becoming the Southern city.

It had the right climate and the appealing scenery — mountains that draw the eye ever upward — and when the railroad came in 1880, it attracted the sorts of men whose grand visions played out in the lavish hotels and ornate homes they built. The excitement to build and the desire to see Asheville become a fine resort town was infectious, and the city grew, in Art Decos and Gothic Revivals and Queen Anne Victorians, through the 1920s. This was a town with big ambitions.

Dr. E.W. Grove was one of those who came to Asheville for the climate. He was a Tennessean and a pharmacist, and he’d made a fortune with the medicines he patented. In 1897 he brought his millions to Asheville, and soon fell in love with the city. Grove is famous for developing and building The Grove Park Inn, but there’s something especially representative of Asheville in his Grove Arcade. The building, although beloved, exists in a different form than the one he’d planned.

Construction on the arcade began in 1926, in the midst of Asheville’s frenzied growth. Grove imagined a five-story base with rooftop terraces and a 14-story tower — a striking space fit for a vibrant, social scene. But he died in 1927, two years before the arcade was complete, and the tower was never built. Upon completion, grocers, milliners, barbers, and booksellers moved in, and the arcade enjoyed 13 years as a hub of civic activity.

In the meantime, the city’s sudden growth during the ’20s resulted in great debt, and at just the wrong time. The Great Depression hit the mountain town hard — its per capita debt was the highest of any city in the nation.

During World War II, the federal government took over the arcade, and for the next several decades, while the city worked to repay every cent of its debt, Asheville slept and the Grove Arcade slept, too.

Wright can tell you all about this time in Asheville’s history and about how the Grove Arcade didn’t reopen again until 2002. He can tell you how far the city has come. The recent recession could have been like the Depression, he points out, but this time, the downtown has flourished.

“It’s an example of how bad circumstances can have good results,” he says. “Out of the horrible story of excessive debt is a bejeweled city.”

Wright’s own story didn’t begin in Asheville. Like so many before him, Wright came here for the climate. He’s a native of the Wilmington area, where he grew up pining for places to eat and places to go, and where the summers, he says, are “hot, humid, and beastly.”

Similarly, the Battery Park Book Exchange didn’t start out in the Grove Arcade. Wright first opened it in the Battery Park Hotel, another part of Grove’s vision for downtown Asheville. But after a falling-out with his landlord, Wright sought a new home for his then 60,000 books at the nearby arcade. The incident could have been a disaster, but luckily, the arcade was welcoming.

He and his staff spent a month painting, moving books, and preparing the space for business. Although people often compliment the store’s distinctive decor, Wright says, it’s a result of the demands of an unusual space more than anything else. And since the store is now on Battery Park Avenue, Wright could even keep its name. He humbly insists that he’s just been lucky — “not smart, but lucky.”

The Battery Park Book Exchange only houses 30,000 books in its new, smaller space, but that’s still a lot, considering that there’s no digital database to keep track of them. That’s not a problem for Kyle Sherard, the store’s book buyer.

“It’s all up here,” he says, pointing to his head. “I physically interact with the books every day.”

Like his boss, Sherard knows a lot of good stories, and he rattles them off with ease. But where Wright’s interests lie largely in history, Sherard gets excited about literature. He can tell you about the rivalry between Flannery O’Connor and Ayn Rand, and about how Jack Kerouac’s Dharma Bums is about Nashville, his hometown. By his own admission, Sherard knows how to talk a person’s ear off, how to guide them and get them invested in a book, which is helpful in a store full of thousands of volumes.

Sherard didn’t know he’d be in the book business, either. He’d always liked reading, but he studied art at the University of North Carolina at Asheville. He used to work next door to the Battery Park Book Exchange, and he kept asking if he could help catalog the books. Wright offered him a job about two years ago.

“Everything has sort of been an accident,” Sherard says, thinking of how he came to be what he calls a private-sector librarian.

Now they keep each other in check: Sherard makes sure the store has enough fiction, and Wright selects books on history, art, and architecture. They help each other make good choices, and although they attribute a lot to chance or luck, it’s clear that they have strong instincts. Wright likes to talk about how hospitable Asheville is to creative instincts like theirs.

“Every zany idea works here,” he says, citing the town’s numerous chocolatiers and breweries, its ghost tours and food tours. It’s still a town with big dreams, just different from what they once were.

“Levo oculos meos in montes,” is the motto of the local university, Sherard’s alma mater: “I lift my eyes to the mountains.”

It’s appropriate: Asheville is in a valley. There’s no place to go but up.