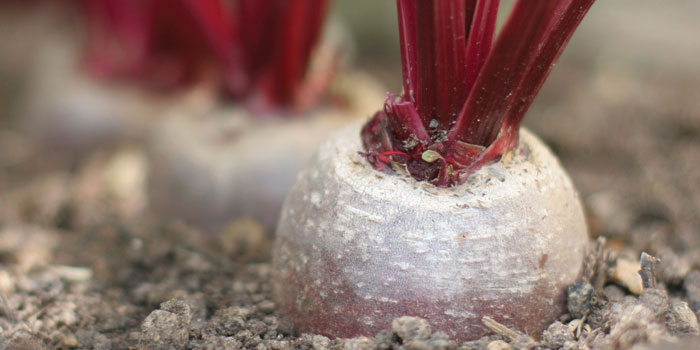 Beets leave a trace. They stain our mouths when we take a bite. They leave dirt under our fingernails when we dig them from the soil. Whether you eat a pickled beet, purple and tangy out of a Mason jar on your grandmother’s table, or a fancy beet, sliced with goat cheese on a platter at an upscale restaurant, you remember it.

Beets aren’t picky. They grow all over the state. Chris Sawyer and Missy Huger plant 2,000 feet of beets at Jake’s Farm on the side of a hill in Candler. They tote their beets — some red, some gold — to market in Black Mountain and Asheville and sell them off the bed of their pickup truck.

Down East, in Rose Hill, brothers Mike and Mark Teachey tend 25 acres of beets in the sprawling fields of Duplin County. In late spring, they start pulling the beets, cutting the tops, and boxing up bunches to ship. Mike and Mark’s dad grew beets in this same loamy, sandy soil for 50 years. And the men don’t plan to stop.

We like beets because they taste like the ground, like the place we know or once knew. And every time we bite into one, those memories make us smile as we lick the stain off our lips.

Several beet varieties show up in fields and at markets across North Carolina.

‘Ruby queen’ is one of the most common varieties of beets for North Carolina farmers. It has a smooth, round shape with a small tap root and deep color.

‘Red ace’ is a go-to variety of beets for Mike and Mark Teachey in Rose Hill. The red color and globe shape are familiar to customers, and the quality holds up well when the brothers take them to market.

‘Touchstone gold’ beets offer a nice contrasting color to the traditional red beets and have a sweeter taste, says Missy Huger of Jake’s Farm. They take a little longer to mature than other varieties, about 55 days.