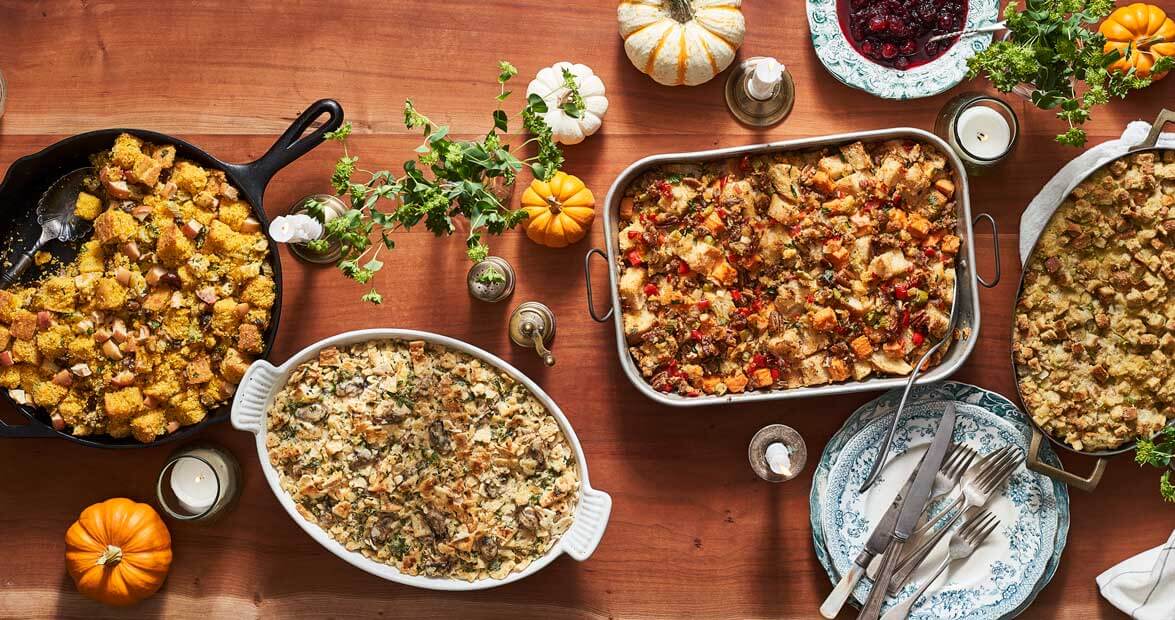 Let’s be clear from the get-go: We North Carolinians call it dressing, whether it’s in a bird or a buttered dish. Culinary distinctions attempt to inform what we ought to call this beloved Thanksgiving side dish (which comes closer to paradise than any bird), but we generally follow along with what our people call it. (Hint: dressing.) And that holds true for how we make it. Dressing is more of a common concept than a singular recipe. It’s the most infinitely variable and insistently personal item in a home-cooked Thanksgiving spread. A turkey’s a turkey, but dressing is a homecoming.

There is little consensus from region to region (or table to table) on what people will recognize, much less accept, as Thanksgiving dressing. If you want to make an informed guess as to where people grew up, ask them to describe what goes into their favorite dressing. (And if they call it stuffing or filling, please welcome these newcomers.) Their answers reveal family traditions, hometown preferences, and a measure of geography across our fair state. The dressing of the Blue Ridge is a far cry from that of the Outer Banks or the Sandhills or our cities. Family dinner-table loyalties and habits hold true any old Thursday, but come Thanksgiving, we double down. The only constant is our certainty that our version is the best.

No matter the ingredients, many of us stipulate, “I’ve had other dressings, but none compares to the one my [insert name of beloved cook here] made.” There’s nothing objective about this assessment, nor is it inaccurate. Dressing is a sentimental dish. No matter how delectable this year’s version — a perfect union of crumbled, crusty cornbread, sage, and butter — the best might always be the incomparable dressing of memory. Which is why most of us never lose our taste for the dressing we grew up on. We’ll eat other things called dressing, and perhaps concede that they’re just fine, but they’re not our dressing.

No single dressing can completely capture any region of North Carolina, but any good dressing suggests a sense of place and provides a snapshot of local bounty, past and present. Each bite reminds us where we belong and what we appreciate. We gather around a table with mouths full of food, stories, and opinions, and that’s worthy of giving thanks. 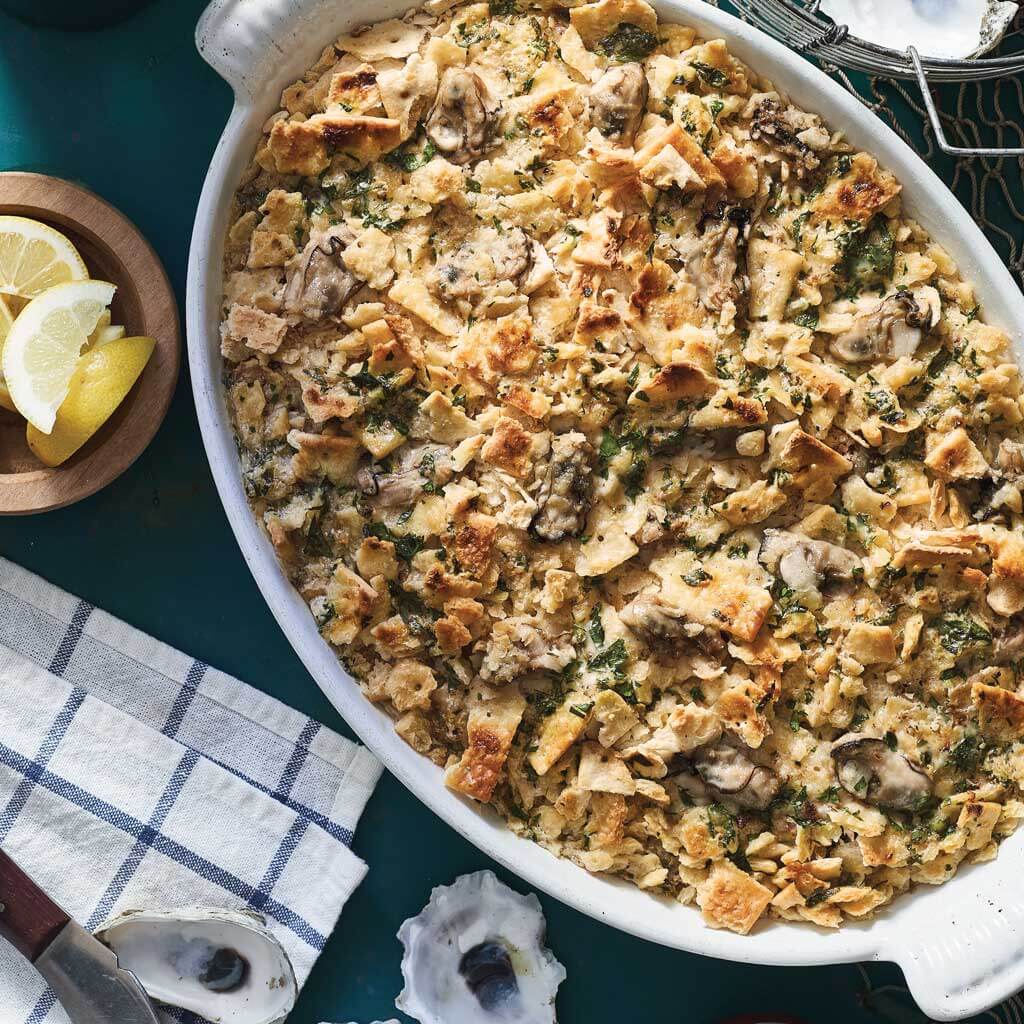 A fair number of oyster dressing recipes use a sleeve or two of saltine crackers (aka soda crackers) for the bready base. photograph by Charlotte & Johnny Autry

North Carolina boasts 12,331 miles of shoreline and an uncountable number of oysters, which taste their briny best during the fall holiday season. So, of course, many coastal Thanksgiving tables include an oyster dressing. A fair number of those dressing recipes use a sleeve or two of saltine crackers (aka soda crackers) for the bready base.

A flip through any coastal community cookbook confirms the region’s affinity for using salty crackers in both savory and sweet dishes, such as in the crust of the iconic Harkers Island lemon milk pie. And anyone who’s slurped down the oyster-bar standard known as a rooster — a single saltine topped with a freshly shucked oyster, horseradish, and sliced jalapeño — can attest that crackers are a proven vehicle for transporting gleaming oysters from shell to lips.

The basic dressing recipe could not be more straightforward: North Carolina oysters and their liquor, crushed saltines (sometimes augmented with breadcrumbs), butter, salt, pepper, and not much else. OK, perhaps a drizzle of cream. And maybe a few fat drops of hot sauce. It’s a restrained dish, yet opulent. Some people might quibble over whether this type of dressing is the same thing as oyster pie. Well, it might be, but not on Thanksgiving.

Position a rack in the upper third of the oven. Heat oven to 400°. Butter a deep 10-inch pie plate or shallow 2-quart
baking dish

In a medium bowl, toss together crackers and melted butter. Stir in parsley.

Spread one-third of the crumb mixture over the bottom of the prepared baking dish.

Add half of the oysters and sprinkle with 3 tablespoons of the reserved oyster liquor.

Cover with one-third of the cracker mixture.

Bake until the top begins to color and the juices are bubbling around the edge, about 25 minutes.

If the top is too pale, broil until golden brown, about 5 minutes more. Serve hot. 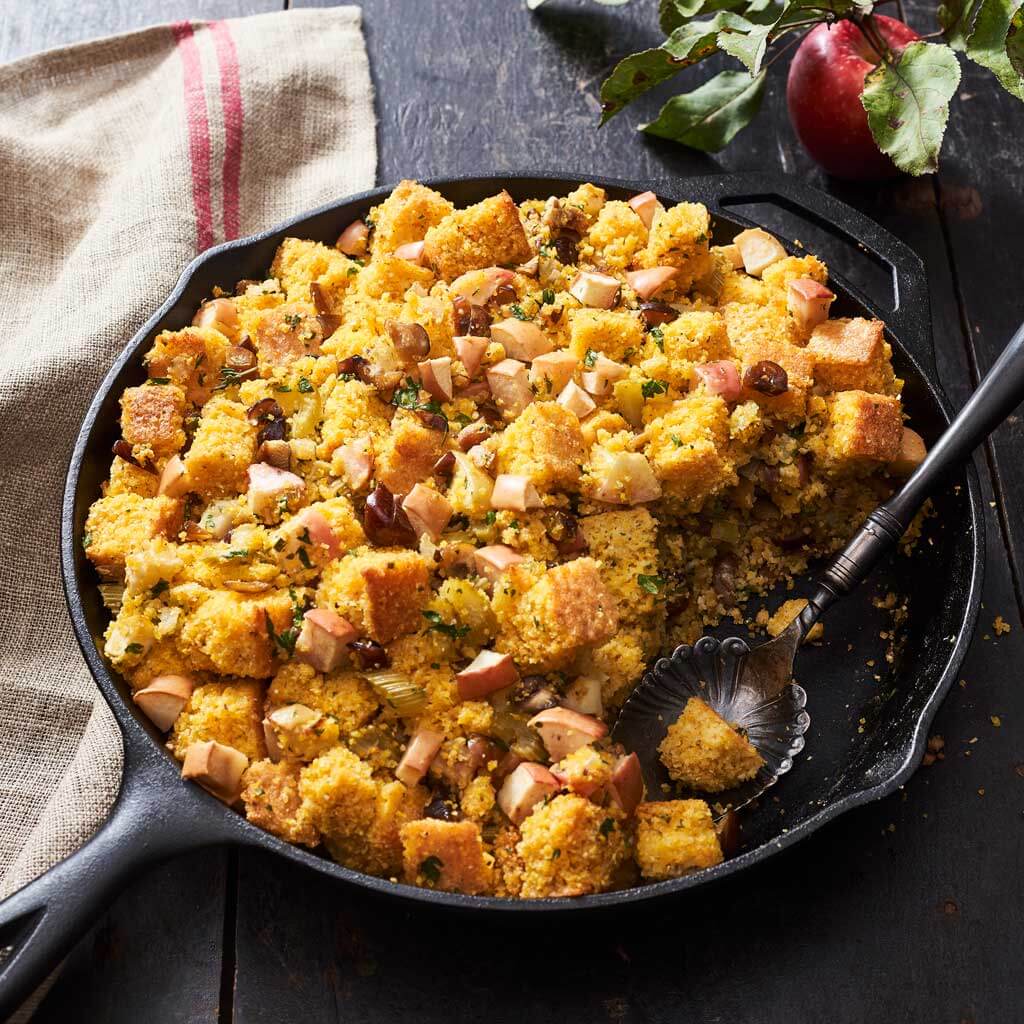 The daily bread on a mountain table is skillet-born cornbread. photograph by Charlotte & Johnny Autry

Most dressing recipes make wise use of the daily bread. More precisely, yesterday’s daily bread, which is now slightly stale and ready to receive broth and melted butter without dissolving. The daily bread on a mountain table is skillet-born cornbread. Sure, cornbread is common in many Southern Thanksgiving dressings, but it’s elemental in mountain dressing because corn has always been our essential grist.

Apples hold sway in the western part of the state, as well. At least 1,500 different kinds of apples once flourished in North Carolina, and although only a few varieties are now grown in large numbers, we still produce around four million bushels each year. A sack of local apples bought at a roadside stand tucked into the curve of a back road is sufficient temptation to add a couple to our dressing. We toss in a handful of chestnuts, too, for good measure and  fond memories — and as a bittersweet reminder that beloved foods can disappear. Until the chestnut blight obliterated our native chestnut trees nearly a century ago, almost every mountain home was within sight of a towering tree, loaded with the nuts in time to fatten up wild turkeys and enrich the dressing. These days, we make do with the store-bought variety, a stopgap to perpetuate our last traces of taste memory. Meanwhile, as botanists work to restore the species to its rightful mountain home, we are consoled by the cornbread in our dressing.

Melt butter in a large skillet over medium-high heat. Add onions, celery, and a pinch of salt. Cook, stirring often, until mixture begins to soften, about 10 minutes.

Stir in apples and cook, stirring often, until tender, about 3 minutes.

Stir in thyme, sage, parsley, and chestnuts and cook for 2 minutes, stirring often. Pour into a large bowl.

Stir in cornbread. Season with salt and pepper.

In a small bowl, whisk eggs until the whites and yolks are blended, and then stir into the bread mixture.

Stir in enough broth to make the dressing quite moist, but not so much that there is standing liquid in the bottom of the bowl. Pour into the prepared baking dish or skillet.

Cover with aluminum foil and bake for 20 minutes. Remove foil and bake until the dressing is set and lightly browned on top, about 25 minutes longer. Let stand for 10 minutes before serving warm.

Note: If your cornbread is freshly made, spread the cubes in an even layer on a baking sheet and let stand, uncovered, overnight, or pop it into a 300° oven for 10 minutes. The cubes should be firm enough to hold their shape when gently squeezed, but not as dry as croutons. 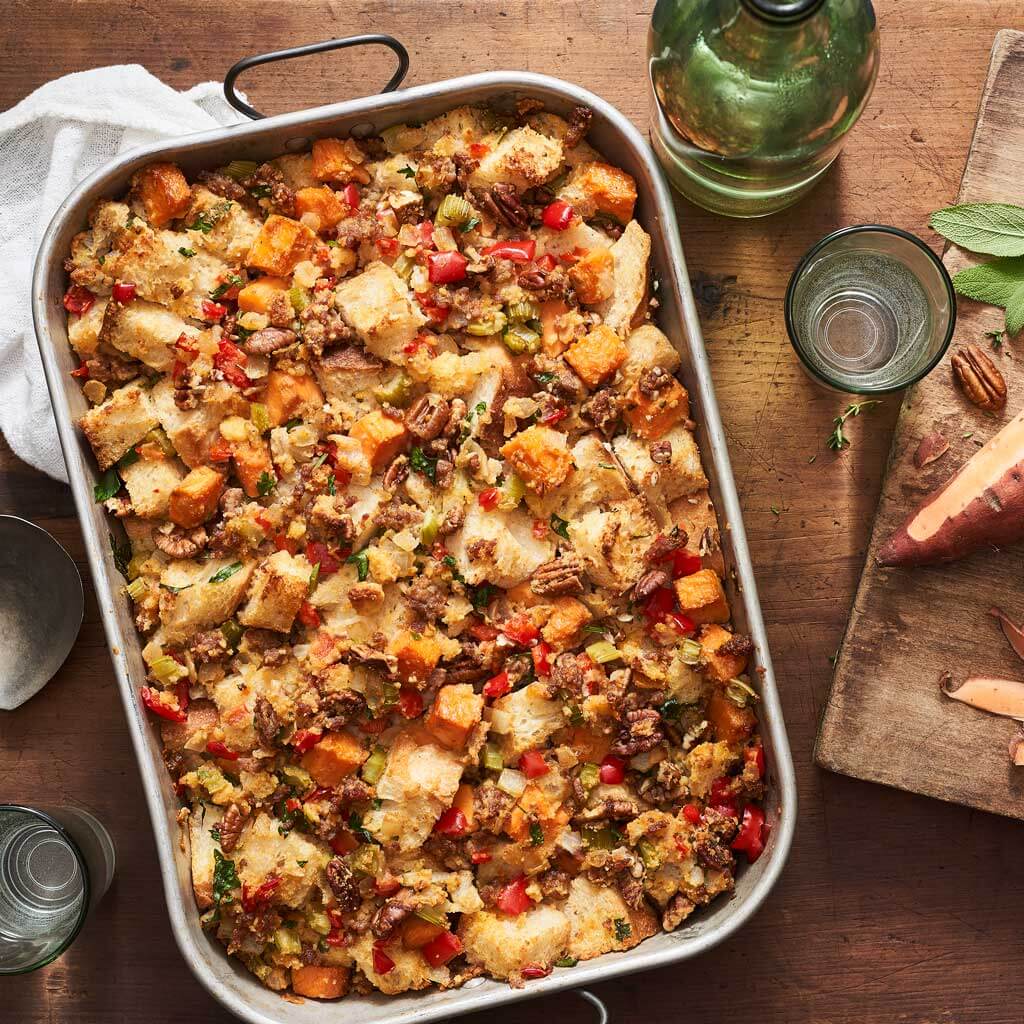 In eastern North Carolina, you’ll find the source of prize-winning sweet potatoes, pork sausage, and turkeys. The first two often go into the dressing, and the third goes alongside the dressing. photograph by Charlotte & Johnny Autry

If there is such a thing as a North Pole for the Thanksgiving feast — a wellspring of tasty things needed for a bountiful holiday table — one could make a compelling argument that it’s somewhere in eastern North Carolina. Therein, you’ll find the source of prizewinning sweet potatoes, pork sausage, and turkeys. The first two often go into the dressing, and the third goes alongside the dressing. The expanse of sandy coastal plains between the capital and the beach is home sweet home to sweet potatoes, our official state vegetable. Experts tell us that last year, our farmers harvested 89,500 acres of sweet potatoes, more than any other state, providing 40 percent of the national supply. A prowl through country stores and mom-and-pop markets (often still run by Mom and Pop or their family) turns up some of the best fresh breakfast sausage around. A dish of dressing that’s rich with crumbled cornbread, dirt-candy sweet potatoes, and sage-scented sausage is a blessing anywhere, but the taste is unmistakably eastern North Carolina.

Preheat oven to 350°. Generously butter a 9 x 13-inch baking dish or mist it with cooking spray.
In a large bowl, mix cornbread and bread.

Cook sausage in a large skillet over medium heat until no longer pink, about 8 minutes, crumbling the meat with a spoon. Transfer with a slotted spoon into the bowl with the bread and toss, leaving the drippings in the pan.

Stir sweet potatoes into the drippings and cook until almost tender, 5 to 8 minutes, stirring occasionally.

Stir in onions, bell pepper, and celery. Cook until vegetables are tender, 5 to 8 minutes, stirring often.
Remove from the heat and stir in parsley, sage, and thyme. Stir into cornbread mixture.

In a medium bowl, whisk together the eggs, orange zest, salt, pepper, and nutmeg. Stir into cornbread mixture.
Stir in pecans.

Stir in enough broth to make the dressing very moist, but not so much that there is standing liquid in the bottom of the bowl. Pour into prepared baking dish.

Bake until set and lightly browned on top, about 45 minutes. Let stand for at least 10 minutes before serving warm. 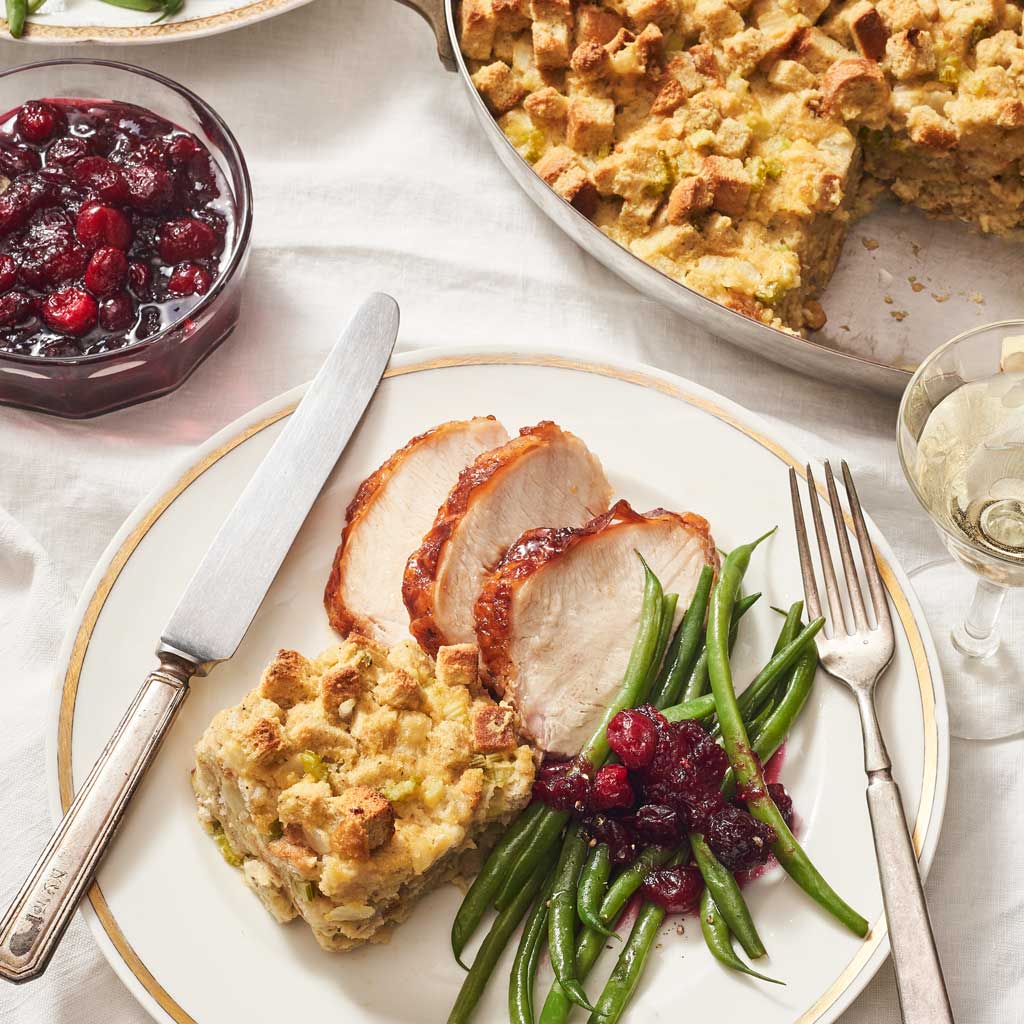 City dressing can be homemade for Thanksgiving, but it’s also found in restaurants year-round. photograph by Charlotte & Johnny Autry

City dressing is made of purchased ingredients: paeans to modernity, convenience, and chain grocery stores. It’s tidy stuff with a neat top and slightly creamy interior that never gets out of line, portioned into squares so even that one wonders whether they were planed. (More likely, they were tapped out by an expert wielding a metal spatula.) City dressing can be homemade for Thanksgiving, but it’s also found in restaurants year-round. Often it’s the only dressing we eat between holidays. When we ferry our trays down the line at K&W and other cafeterias known only by their initials, those golden blocks form the foundation of the roast turkey special. It’s the dressing we find at The Club (country or bridge), and it’s the dressing that many of us were raised on. In an era when homecooks shopped for ingredients instead of growing them, the expedient choices of the grocery aisle — bag after bag of fragrant Pepperidge Farm breadcrumbs, can after can of cream-of-something soup, and Swanson broth — never failed to meet our expectations. The outcome of this classic combination is never in jeopardy, and the flavor is reassuringly delicious. We know how to doctor it up to suit our tastes, but no matter what, city dressing turns out worthy of thanks in our 9-by-13 CorningWare, time after time.

In a large bowl, toss together the stuffing mix and crumbled bread.

Warm butter in a medium saucepan over medium-high heat. Stir in onion and celery and cook until almost tender, about 5 minutes. Stir in salt, pepper, and poultry seasoning, and cook 2 minutes more. Pour into bowl with Pepperidge Farm mixture and toss well.

In a medium bowl, whisk together cream of chicken soup and eggs. Stir into dressing mixture.

Stir in enough broth to give the dressing mixture the consistency of cooked oatmeal. Pour into prepared baking dish.

Bake until set and browned on top, about 45 minutes. Let stand for at least 10 minutes before cutting into squares and serving warm.