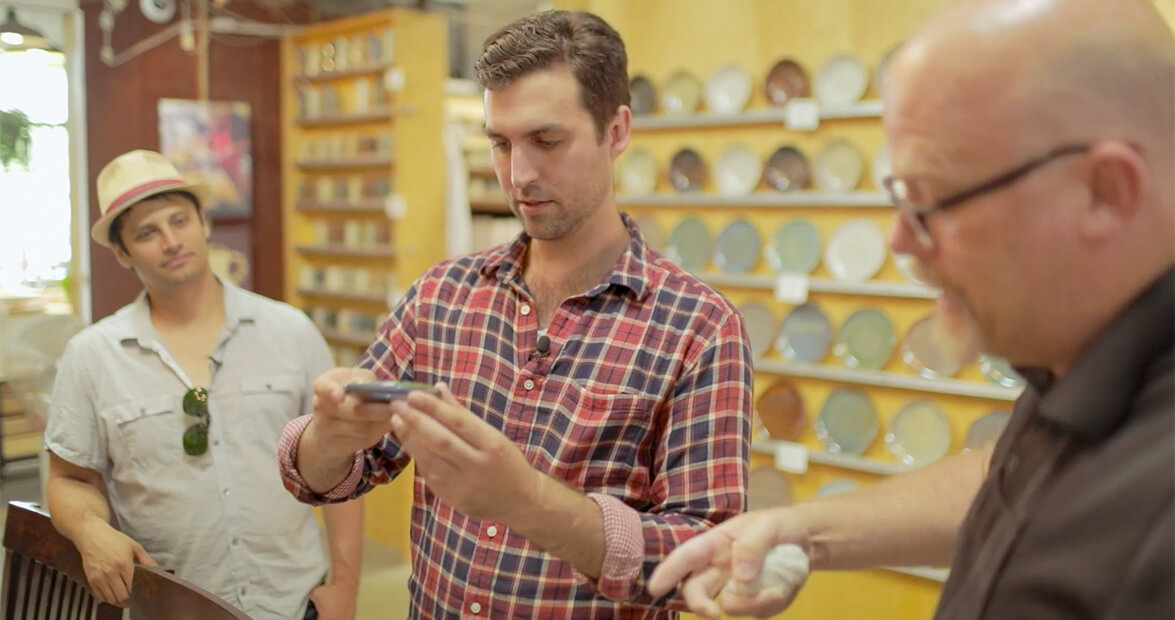 The influence of art is apparent no matter where you are in Asheville, but the creative heart of the city lives within the River Arts District, just west of downtown, along the French Broad River. You may have driven through the district, or even popped into a few studios — but there is so much more than meets the eye. In fact, it’s arguably one of the most extensive and diverse art districts in the world.

You may be wondering, How is that possible? The district is only a mile long, and half a mile wide. But in this small area, there are hundreds of artists and studios specializing in all sorts of media. And that number can be a little overwhelming if you don’t know where to start.

John Miguel Almaguer, owner and operator of Asheville Art Studio Tours, is an artist himself; his company Almaguer Glass has been in the Asheville Glass Center in the River Arts District for years.

“I noticed so many visitors coming into the glass studio and asking, ‘Where should we go next?’ It was a constant question,” Almaguer says.

Almaguer got used to pulling out a map of the River Arts District and pointing out some of his favorite galleries, plus a few off the beaten path. It became clear that visitors were in need of some guidance.

“People had a hard time understanding where they were, let alone where to start,” Almaguer says. “With more than 200 artists, it can be a little intimidating.”

Almaguer founded Asheville Art Studio Tours in 2016 with a mission to provide small, intimate, artist-led tours through the River Arts District. The two-hour art studio tours are curated so that you can see artists working in different media and styles, and get a better feel for everything that the district has to offer. His company also offers Experience Tours that provide hands-on lessons in pottery or glass-blowing, Custom Tours that are great for private groups, and even VIP Tours that will fill an entire day for you and your group, from studio tours and classes to dinner, transportation, and entertainment.

Almaguer’s enthusiasm and passion for the district is infectious. Walking through the River Arts District with him feels like spending time with an old friend, with the added bonus of learning new things along the way.

The River Arts District wasn’t always the dynamic community that it is today. The area was originally the industrial center of the city, home to large warehouses and factories in the early 20th century.

After the Depression, businesses dwindled; the buildings that housed them became run-down and were mostly abandoned for decades. Then in the ’80s, artists noticed the area’s cheap rent and large spaces where they could make their work.

“[Artists] weren’t initially thinking about retail or selling their work here at all,” Almaguer says. “But after some time, with no real planning, it just kind of evolved.”

According to Almaguer’s research, Asheville’s River Arts District has more artists and studios than the Mitte in Berlin, Germany, which is 30 times larger and is one of the world’s most famous art districts. It’s also more extensive than the Beijing 798 Art District in China and the Wynnwood Art District in Miami, Florida.

The River Arts District is home to every type of art you can think of — painting, blacksmithing, jewelry making, fiber works, glass-blowing, pottery — and some kinds that you may not have heard of. Dialuminism is a painting technique that artist Stephen St. Claire created in this district; he’s the only Dialuminism artist in the world.

“Art is everywhere here,” Almaguer says. “John Payne, who passed away in 2008, he turned this building into art spaces,” he says, gesturing to the Wedge Studios, a giant warehouse that’s also home to the original Wedge Brewing Co. location. “There’s a story about him, that if you left a piece of metal on the ground, it might disappear then reappear on this wall, or on the wall over there.”

Almaguer knows the area like the back of his hand. He’s also on a first-name basis with most of the artists.

“We have amazing artists here, not just in their work, but who they are,” Almaguer says. “We really love to see people connect and get to know each other. I think that’s what people want, too. They don’t just want to see art — they could just go to a gallery for that. But when you’re at a studio, you get to connect face-to-face and heart-to-heart. That’s my favorite part, and the thing that I long for people to experience.”