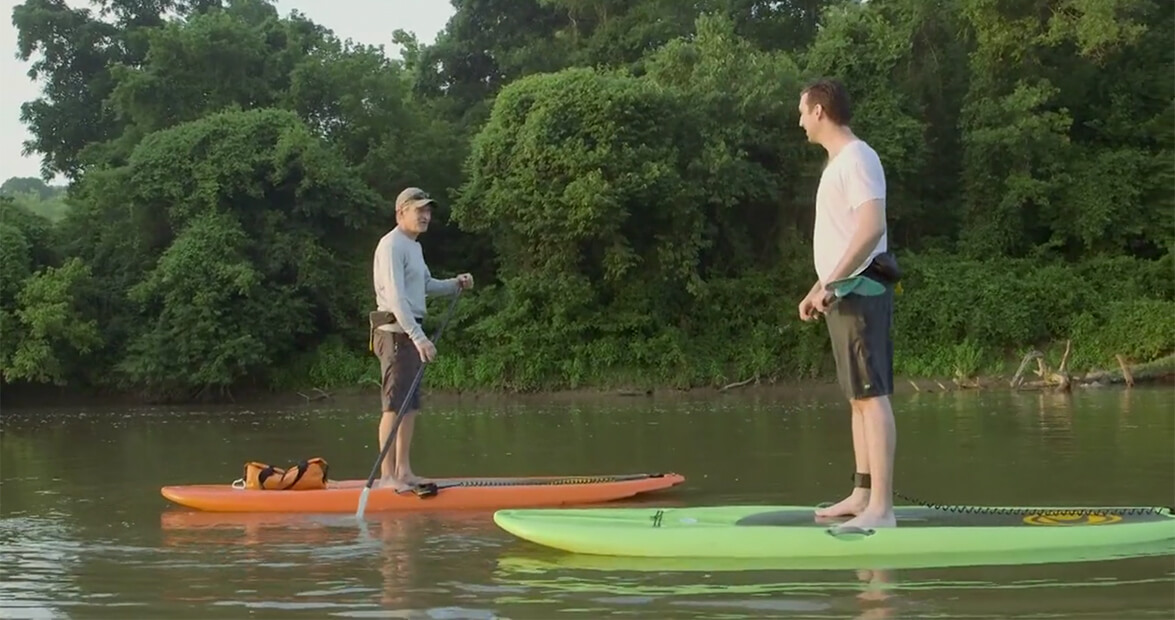 The French Broad River crosses right through Asheville, splitting the city in half, but it is anything but dividing. Rather, it is a meeting point, where people from all over the city — long-distance visitors in downtown, locals in West Asheville, day-trippers to the Biltmore — come together to enjoy the views, grab a pint, or explore the River Arts District.

The river itself is a hub for activities during the warmer months of the year. On a hot day you’ll see groups of friends and family floating on tubes or cruising in kayaks. Others enjoy the water from dry land on the patio of New Belgium Brewing Company, or walking along the French Broad River Greenway.

Instead of (or perhaps in addition to) the aforementioned activities, which are likely to first come to mind when visiting Asheville, opt for something you may have never tried before: standup paddleboarding with Wai Mauna Asheville SUP Tours.

Wai Mauna Asheville SUP Tours is run by Kyle Ellison, who moved to Asheville from Maui almost three years ago for change of pace, and to be closer to his wife’s family as they started having children. Having grown up on the beaches of Hawaii, he’s a paddler, diver, surfer, and sailor, and has been paddle boarding for more than a decade.

“I’m originally from Maui, in Hawaii, where modern day paddleboarding essentially began around 1999 or 2000,” Ellison says. “I was introduced to it pretty much at its birth. I personally started paddleboarding around 2004, and I’ve been racing since 2007.”

When Ellison and his family arrived in Asheville in January 2015, they didn’t have much of a plan. Ellison found himself on the French Broad River on his sister-in-law’s paddleboard, even though it had just snowed. He used this time on the water to really think about what his next career move should be, and what he loved doing most. And it turned out that it was right in front of him — or, rather, below him.

“My friends in Hawaii and I had always talked about starting a paddleboarding company as early as 2005, but never did,” Ellison says. “I always wished I had done it. So this was kind of like a second chance to say to myself, Well, you didn’t do it then, so why not do it now?”

Since starting Wai Mauna Asheville SUP Tours in 2015, the company has evolved right along with the ever-growing tourism in the area. And although it has been around for close to 20 years, paddleboarding as a sport has evolved since Wai Mauna’s inception, as well.

“Paddleboarding is still a relatively young sport,” Ellison says. “So it’s cool to be in an industry where every year is different than the year before. There are inflatable boards now, and people are doing whitewater on paddleboards, so it’s constantly evolving and changing which is exciting.”

Paddleboarding may seem intimidating if you’re a newbie, but the patient, experienced guides at Wai Mauna are here to show you that there’s nothing to be afraid of.

“90% of our customers have never paddleboarded before,” says Tom Huml, a guide with Wai Mauna. Huml started out in whitewater kayaking before moving to whitewater canoe, and he now runs rapids on his standup paddleboard with a crew of Asheville’s best paddlers. But when he’s guiding a tour with Wai Mauna, he is a teacher, not a competitor. “This is a very forgiving section of the river for them to get their first experience; we really explain what to do and what to look out for, so they can just really enjoy the scenery of going down the river.”

People flock to the water when the weather is nice, and truthfully, it can get a little crowded. On a hot summer day, you’ll likely see hundreds of people floating on tubes down the French Broad River. So what can you do to avoid the crowds?

You wake up at the crack of dawn, and get onto the water before sunrise.

“The thing I love about sunrise tours is being out there with the sun coming up in front of you,” Huml says. “It’s quiet, you hear all the birds chirping, and it’s just pristine. There’s nobody else out there, you have the entire river to yourself. Waking up is the hard part, but once you’re up, it’s all smooth flowing and it’s a lot of fun.”

If you’re not a morning person, don’t worry—Wai Mauna offers tours throughout the day, as well as sunset paddles. You can take a guided tour with a small group, rent a board on your own, and even schedule a private lesson. One new thing that Wai Mauna is excited about this year is the addition of their 6-Person SUP: a giant, 17-foot long, inflatable paddleboard that can actually hold up to eight people.

Unlike many outdoor adventure companies who will just rent you a paddleboard or a kayak or a canoe without any instruction, Wai Mauna spends time with each customer to make sure that you feel comfortable on your board, even if you are just renting one. Guided tours offer even more instruction, from how to stand (“knees slightly bent, not too rigid,” Ellison emphasizes), to how far you should dip your paddle into the water (it should be fully submerged).

Another useful tip? Relax, and breathe.

“The number one thing I would say to people is that it’s much easier than you think,” Ellison says. “Come out and try it, and you’ll be surprised.”