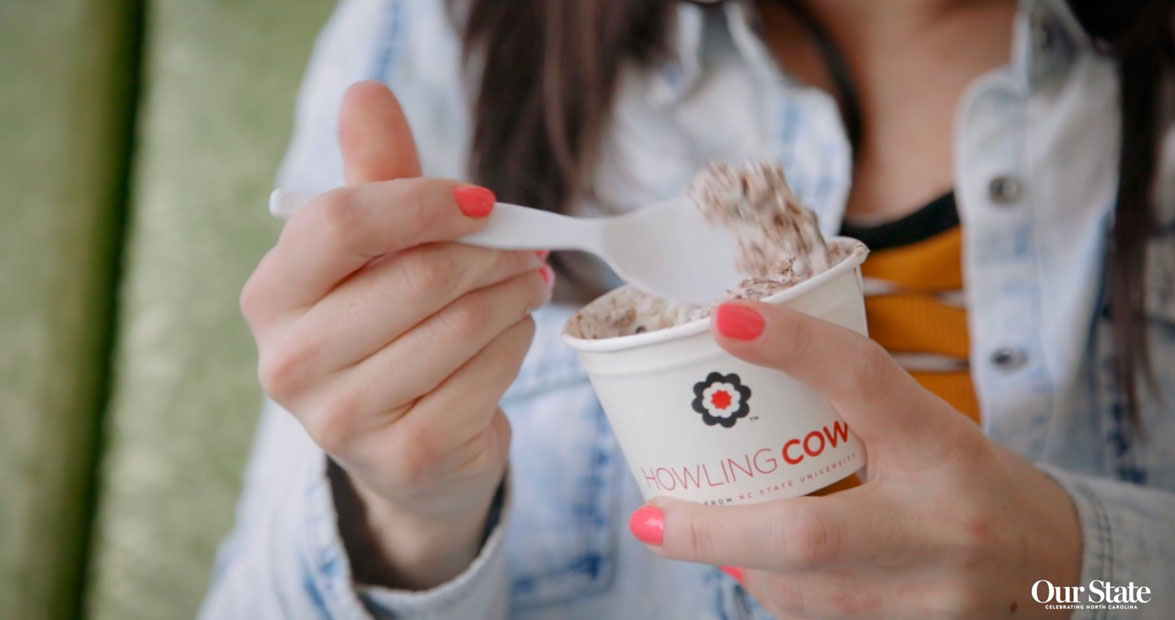 Long before Wolf Tracks ice cream — with its peanut butter cups and fudge swirls — stole the Wolfpacks’ heart, Carl Hollifield had a crush of his own on peanut butter.

As a student in the late ’90s, and then as a young alumnus in the early 2000s, Hollifield frequented the Ben & Jerry’s on Hillsborough Street near Meredith College. When he began working in accounting for NC State’s Dairy Enterprise System on campus shortly after graduating in 2003, he had an epiphany. “Chocolate peanut butter was one of my favorite flavors of theirs, and the dairy program didn’t have a chocolate peanut butter ice cream,” says Hollifield, who is now the program’s assistant director. So, he made it his mission to bring peanut butter to the people of North Carolina State University.

That was in 2005, and Howling Cow is still producing Peanut Butter Spin, along with 19 other rotating flavors of ice cream. The creamery also produces an assortment of dairy products, such as milk, eggnog, heavy cream, and chocolate milk, for the university and state agencies.

The program has come a long way since 1918, when the North Carolina Agricultural Experiment Station began pasteurizing milk in the basement of Patterson Hall for soldiers stationed near the school during World War I.

For 27 years, the creamery was only allowed to sell its ice cream products once a year at the state fair; however, that changed in 2005. Thanks to an exemption from the Umstead Act — which prohibits state government institutions from selling products that compete with private businesses — the creamery was allowed to sell ice cream directly to the public for the first time. Once the creamery was given permission to sell to the public, Hollifield realized they needed a name, because NC State Dairy Enterprise System ice cream and milk just didn’t have a ring to it. Three years later, the Howling Cow brand was born.

It’s been 15 years since Hollifield started working for the dairy program, yet his friends and family still aren’t quite sure what exactly he does day to day.

“My friends think I milk cows for a living. My daughter thinks I make ice cream all day,” Hollifield says. “Neither one of those are correct.”

Instead, it’s fewer sundaes and more spreadsheets for Hollifield, who spends the majority of his day in front of computers managing the finances and daily operations of the creamery. While Hollifield makes time for an ice cream break every day, the flavor tests fall under the category of work, not pleasure. Developing and tasting new ice cream flavors may sound like a dream job, but the process for each new flavor is actually quite extensive.

“It takes a good three to five months to make a flavor,” says Director Gary Cartwright. In recent years, new flavors have made their debut at the North Carolina State Fair.

Lemon Wafer debuted at the 2015 fair and on campus the following semester. Caramel Apple Crisp — the winner of an online design-your-own flavor competition — appeared in 2016 as the official flavor of the NC State Fair. At the end of the year, the flavor was given a permanent place on the menu. But Howling Cow’s most popular flavor is Wolf Tracks, a vanilla and fudge-swirled ice cream with mini peanut butter cups, which was developed as a modern spin on Moose Tracks ice cream at the chancellor’s request. The flavor possibilities are limited only by one’s imagination. “By modifying the background flavor, the freeze-ins, and the ripple, we can make thousands of flavors,” Cartwright says.

Devan Pendry is walking through the calf corrals as she warms a bottle of milk between her thick brown overalls and sweatshirt. Each calf, ranging from newborn to 70 days old, comes up to the fence looking for a head scratch or a snack as she passes by.

“The calves are always so excited to see you,” Pendry says, before stopping to feed a 25-day-old black-and-white Holstein calf named Raindrop. Had you asked Pendry what she wanted to be when she grew up years ago, she might have told you zookeeper or vet. “My family is an animal-loving family, and I was one of those kids who didn’t play with Barbie dolls, I played with animals,” Pendry says. But dairy farming? It wasn’t until Pendry started working at NC State’s Dairy Research and Teaching Farm — located five miles off campus in Raleigh — as a freshman animal science major in 2010 that she discovered her love of cows. In 2015, Pendry returned to the farm to accept a full-time role as herd manager.

The 165 Holstein, Jersey, and Guernsey cows that get milked twice a day each produce an average of 80 pounds of milk every day, or 11 gallons per cow. The milk is then brought to NC State’s Schaub Hall, where Cartwright and Hollifield oversee a staff of full-time employees and student workers responsible for separating the raw milk, pasteurizing it, and creating dairy items from it.

Breeding, administering medicine, assisting with birthing, and guiding labs also fall under Pendry’s responsibility as herd manager, a position more frequently held by men. Pendry, however, is the farm’s third consecutive female herd manager, and she sees the farm as a model of what’s happening across the agricultural industry nationwide.

“Typically, most farms are run by men, but that’s changing,” Pendry says. “Now there are so many women filling these roles, taking over farm management, and buying farms. We currently have females in the roles of technician and calf manager — most all have been males in the past — and a majority of our student workers are female. It’s definitely changing.”

This year, NC State is celebrating its centennial anniversary of pasteurizing milk on campus by looking ahead at the program’s future.

There’s been talk of what comes next — Pendry hopes Howling Cow will create and sell cheese, while Cartwright and Hollifield have started acquiring the necessary equipment to begin their next product line: yogurt.

In April, the new Randleigh Dairy Heritage Museum, located on the NC State farm, will open its doors to FFA, 4-H, and Wake County school groups to educate students on how milk is made and how milk products are processed, with plenty of opportunities for hands-on experience. As an extension of the museum, Hollifield hopes to break ground on a new dairy education center and creamery cafe this spring; the cafe will sell Howling Cow products, and will serve as the first step for visitors in learning about where one’s food comes from.

Educating the public and students is a critical component of Howling Cow’s mission: to further the learning process about the food cycle and food science as a whole.

“We get the students involved, and this becomes a learning experience,” Cartwright says. For Cartwright, that’s the cherry on top.