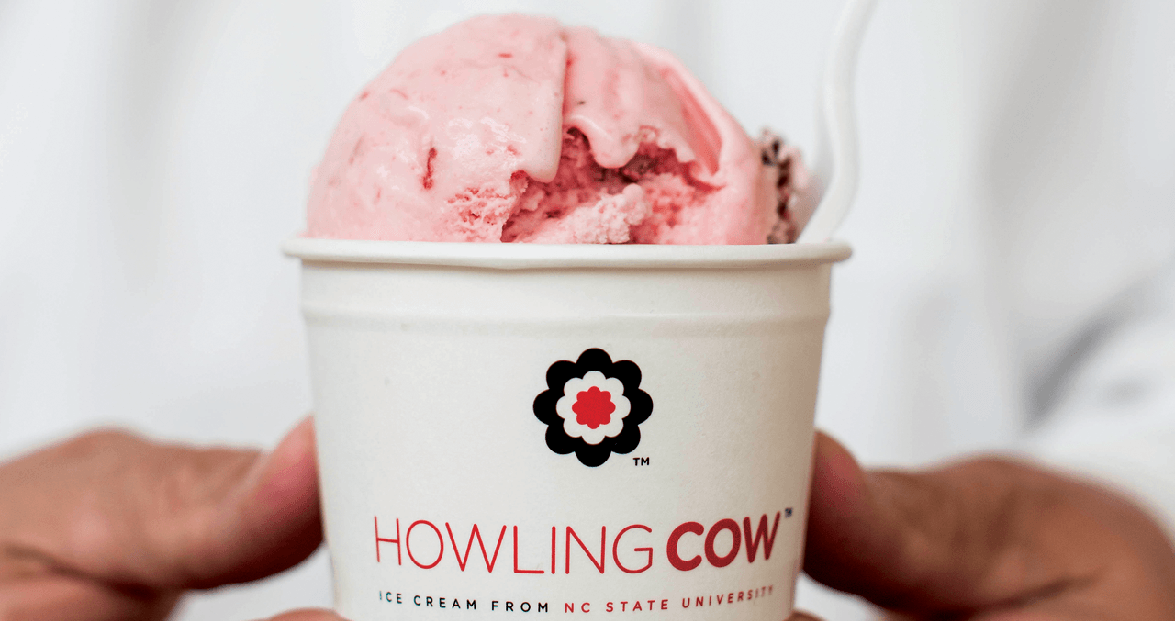 Alli Davis admits it. She names the cows.

Davis, all of 22 years old, wears her sandy blonde hair back in a ponytail. She stands at the end of a row of calf corrals in a gray T-shirt and muddy boots. The calves see her. They’re all between 2 and 8 weeks old and are built like stocky little deer. They bounce around like big puppies. The conversation comes to a dead stop. Calves have that effect on people.

There’s one named Shamrock. The youngest ones, the twins on the end, are named Lucy and Ethel. One in the middle is named Butter. Her mom’s name was Peanut. There’s another one named Jelly. Davis wants to name the next one Sandwich. “Nobody thought that was a good idea,” she says in a thick Tennessee accent. 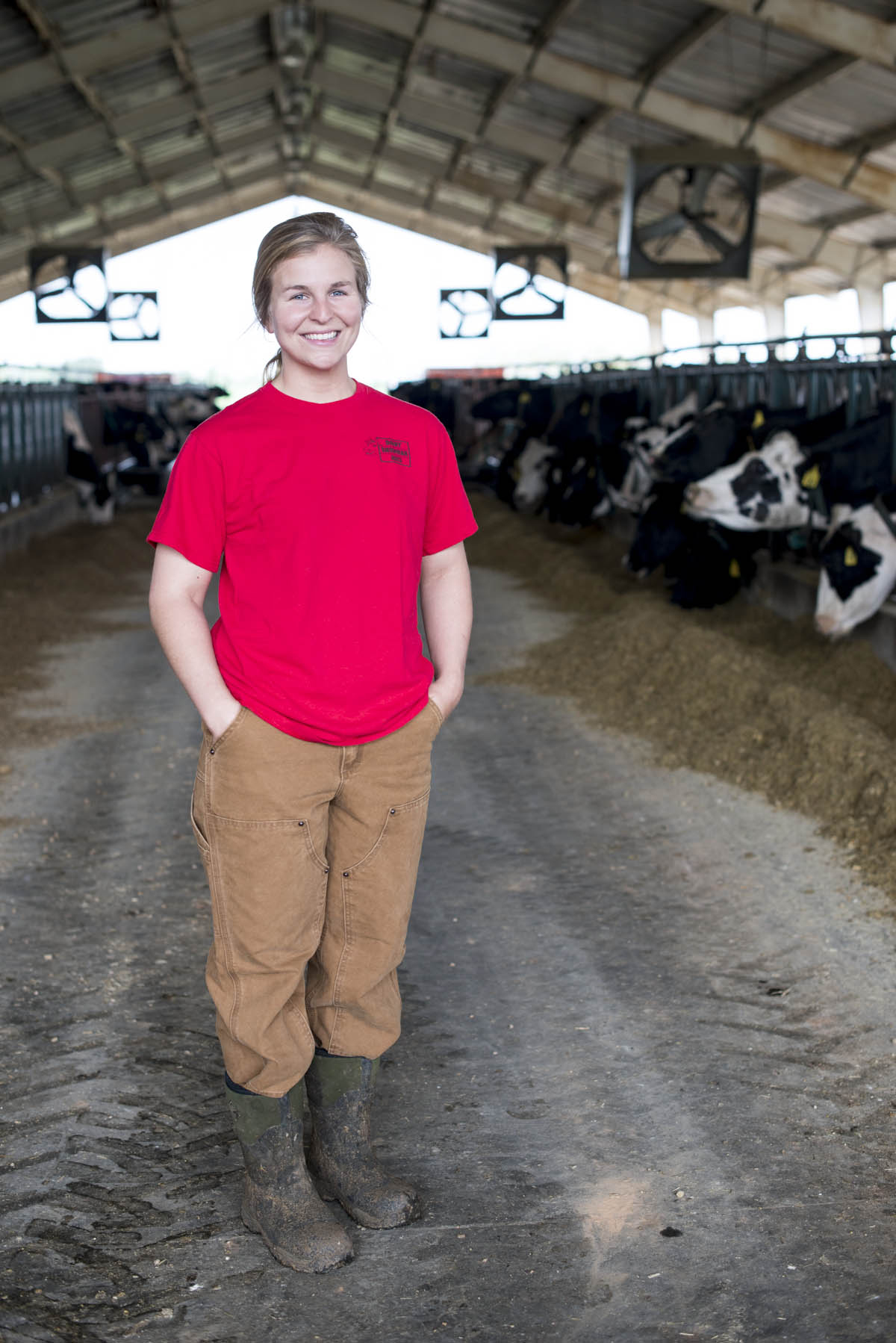 Alli Davis, herd manager at N.C. State’s dairy farm, has been a key link between the farm and the Howling Cow team. photograph by Lissa Gotwals

Cows respond to names, she says. She knows this because she was raised on a dairy farm with 600 cows. Sure, the names are cute, but Davis has an underlying seriousness about her. “It’s not a job,” she says. “Dairy farming is a way of life.”

To find Davis and her cows, you have to drive south out of Raleigh on Lake Wheeler Road, until the apartment complexes and pines start to peel away. First you pass the white-fenced turf fields. Then you pass the place where they keep the swine. Then you turn left into North Carolina State University’s Dairy Research and Teaching Farm. You roll up a long gravel drive that ends just past a big oak tree, next to the new milking parlor where 20 cows at a time can sidle up, rump first, and give milk. It’s far enough out to feel like a world away from campus, but close enough to see Raleigh’s tallest buildings poking over the treetops. It’s here that Davis cares for 190 cows, a number that’s representative of an average North Carolina dairy farm. Most of them are black-and-white Holsteins with some brown Jerseys mixed in. They’re milked twice a day, at 7 in the morning and 7 at night. She needs to keep them happy.
“Happy cows give good milk,” she says.

This is where it starts.

The place is meant for milking, but also for watching. For decades, students have been coming to North Carolina State University to learn the trade — how to raise cows, take their milk, pasteurize it, process it, and turn it into everything from 2 percent to ice cream and cheese. The technical side, the technology and the training, has always been a part of daily life here.

In 2008, that life was threatened. The Great Recession sent state universities scrambling to find places to cut back, and the cost of running a 389-acre farm seemed to be too high. Elsewhere in the country, universities started selling off big chunks of their herds both to make money and to save their future dairy programs. There was a worry that the farm and many of the cows, which supply the milk for N.C. State’s dining halls as well as state prisons, might fall victim, too.

Back on campus, Gary Cartwright sits in his office on the ground floor of Schaub Hall and pulls up a website listing 54 things to do at N.C. State. At the top of the list: Eat a scoop of Howling Cow ice cream. “Since its inception, we’ve been No. 1,” he says. “We’re beating ‘going to class.’ ” 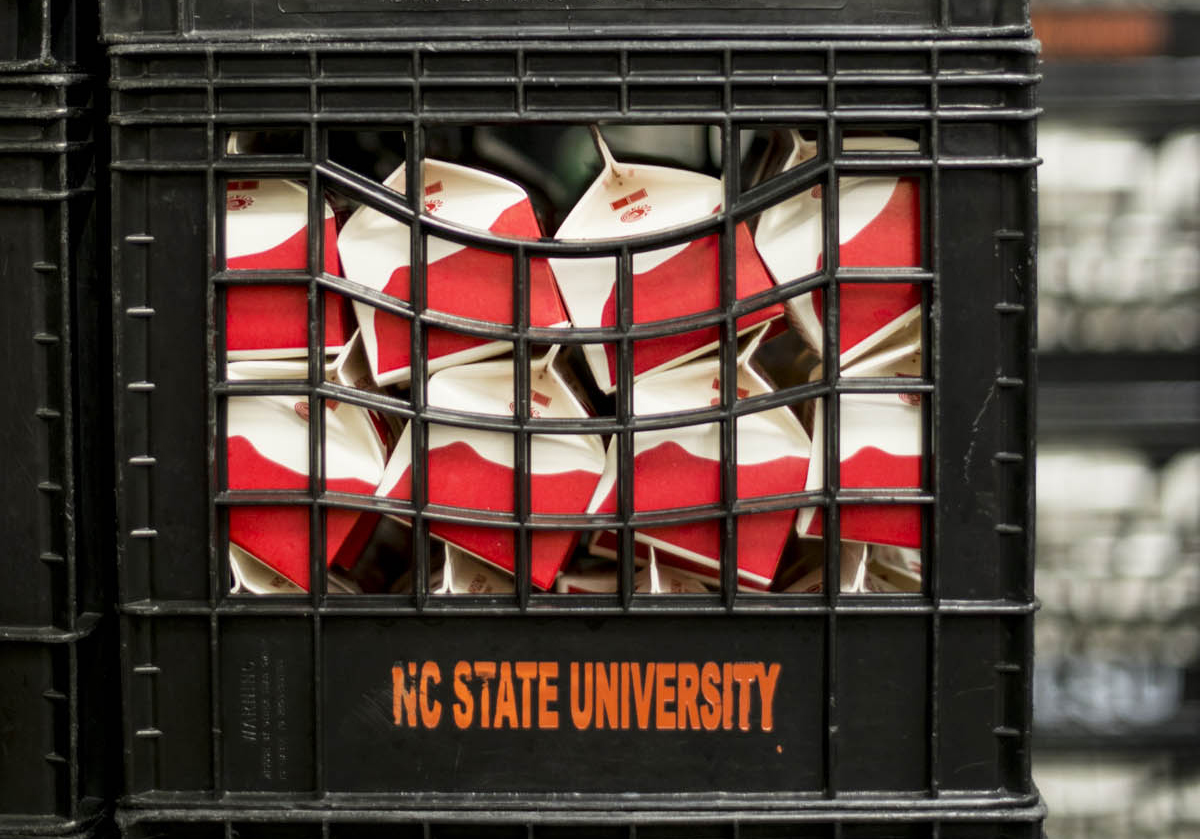 All of Howling Cow’s products – from gallons of ice cream to half pints of milk –originate on N.C. State’s dairy farm. photograph by Lissa Gotwals 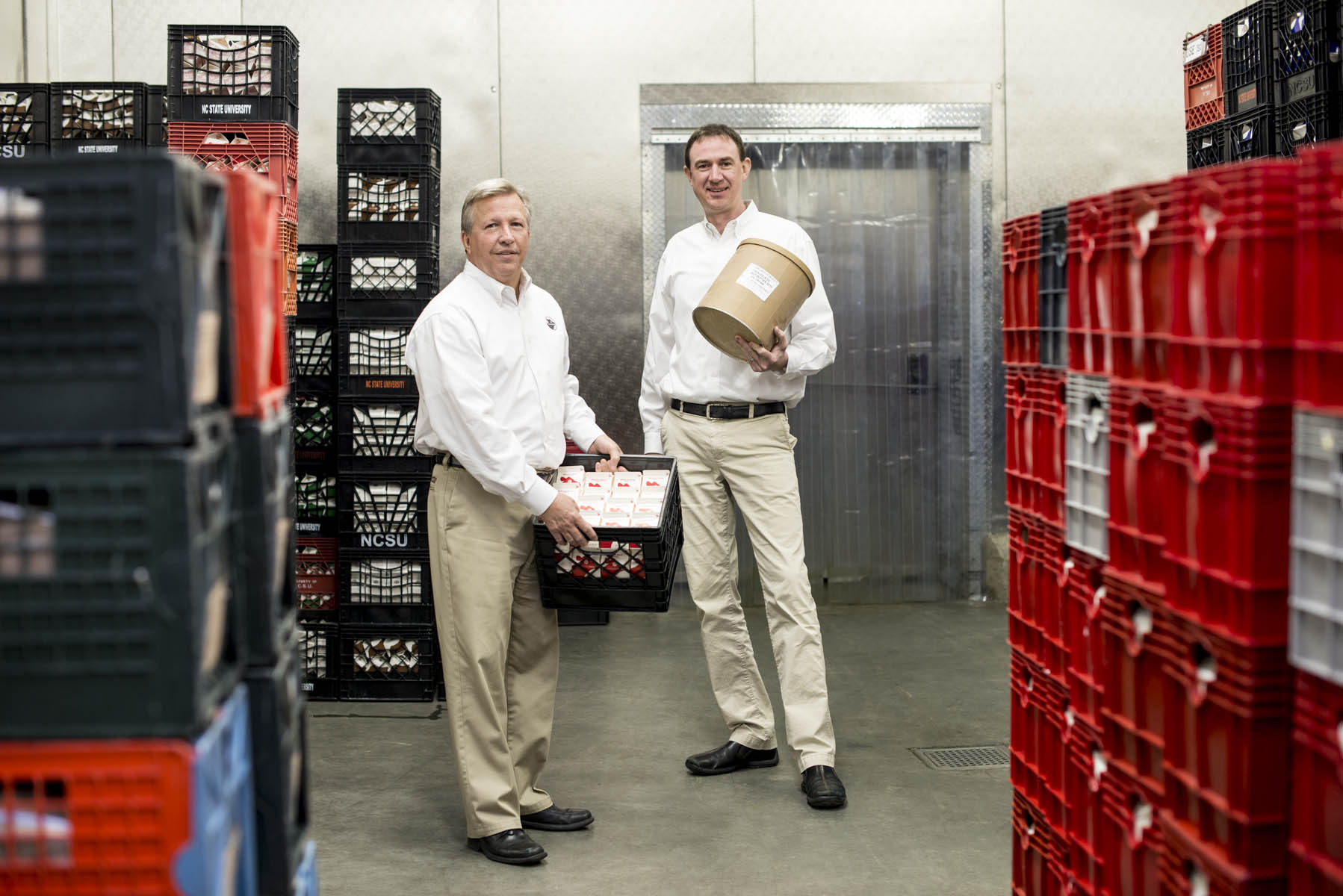 After the milk is collected and processed, Gary Cartwright and Carl Hollifield oversee its sale on campus. photograph by Lissa Gotwals

But students weren’t able to learn a valuable side of the business — how to sell what they made. “In the past, because we could not sell and market to the public, everybody around the department would taste it and say how great it was, and then you’d throw it in the dumpster when it expired,” Cartwright says.

The reason was a state law known as the Umstead Act, which doesn’t allow state government institutions to sell things that compete with private business. There are some exceptions. One of them allowed N.C. State to sell its ice cream once a year, at the State Fair. The size of the scoops became legendary. The wait in line was sometimes a half-hour long.

So Cartwright and others figured that if they could sell their ice cream, their students would learn a valuable lesson, and all of that ice cream wouldn’t go to waste. Other universities with dairy programs, like Penn State, Cornell, and Wisconsin, all had retail ice cream shops powered by their own collegiate cows. Why not State?

In 2005, with the blessing and support of the state’s dairy industry, the General Assembly gave N.C. State’s dairy an exemption to the act allowing direct sales to the public, so long as the ice cream and other dairy products were sold on campus, and the proceeds went back to support the dairy program. A few years later, they came up with the Howling Cow name and went to work.

“Everything needs to have a return,” Cartwright says. Before the farm was brought into the Dairy Enterprise System in 2009, it was nearly 100 percent taxpayer-supported. Now it’s close to 30 percent. There are plans to open up an agricultural education center at Schaub Hall to let the public see where their milk is made. “I don’t worry about it being a success,” Cartwright says. “I worry about how we’ll handle all the people that show up.”

Cartwright walks into the red-tiled Feldmeier Dairy Processing Lab, where stainless steel pipes and tanks are strewn about. He shows me the spot where, every day, rain or shine, a tanker truck pulls in with milk from the cows at Lake Wheeler. They work when everyone else is off. “The cows don’t cross their legs on holidays,” Cartwright says.

From there, the raw milk sits in a holding tank before being separated into things like skim milk, heavy cream, and whole milk. After that, it’s heated and pasteurized and homogenized using a contraption made up of a series of metal tubes before it’s pumped into a holding tank. There, the different types of products are created. There are more than a dozen flavors. The chancellor himself came up with the idea for Wolf Tracks ice cream, made of vanilla, chocolate, caramel, and chunks of fudge. It’s Howling Cow’s best seller.

Howling Cow goes out all over campus, from the creamery at the Hunt Library to convenience stores around campus. And that’s where the marketing comes in. N.C. State had been making its own ice cream since the mid-1940s, but once they were allowed to sell it, they needed a name. Howling Cow was born. Now, that brand appears on ice cream and milk and whatever else students can dream up. Back in his office, Cartwright reaches up to a shelf and pulls down a prototype milk carton with a slick graphic of a cow wearing earbuds on it. It’s chocolate milk fortified with whey protein — a workout-recovery milk called Pack Power.

It used to be that students only worried about making the product. Now, they’re worrying about how to sell it. In the case of Pack Power, seniors had to figure out how much it should cost and how to make it NCAA-compliant so student-athletes could enjoy it.

The dairy program has changed during the past 30 years, but so have the students. In the old days, many students just wanted a career, Cartwright says. “They were going to buy a house, have a family, and hopefully not get moved all around the country. I think the students now know the reality of that has changed,” he says. “They want to know the impact of what they’re doing.”

Around lunchtime, the food court at the new student union is packed, and students flit in and out of the Talley Market convenience store. Howling Cow logos — featuring the profile of a cow with a red-white-and-black eye — are plastered behind the ice cream counter in a Warhol-like variety of colors. Students stop in to get what they need. But they also walk up to the counter to get what they want. 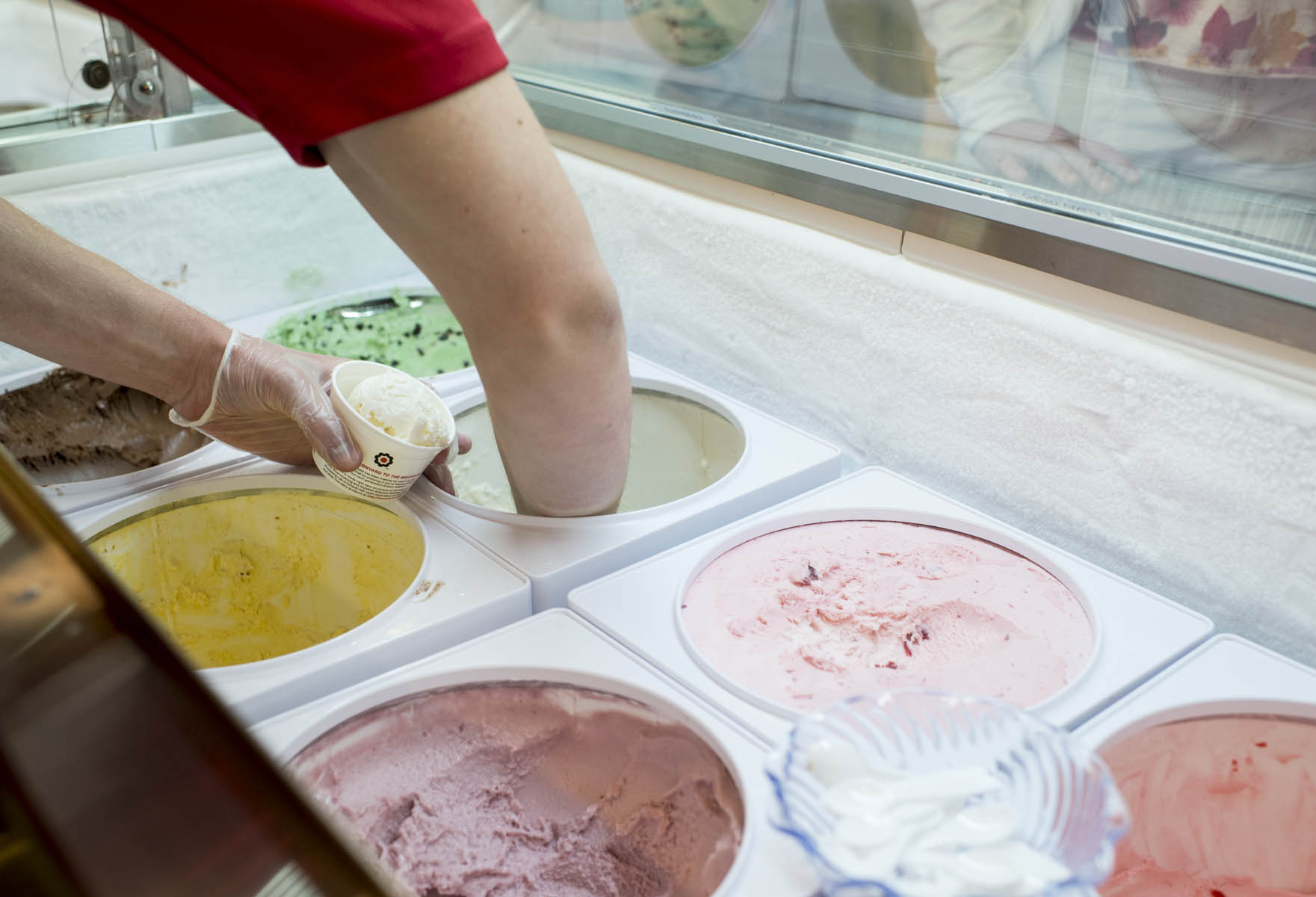 There are a lot of flavors to choose from at the new ice cream parlour in the newly renovated Talley Student Union at N.C. State University. photograph by Lissa Gotwals

Andrew Wegener, a sophomore from Oxford, wants Cookies & Cream. He’s big on ice cream, he says, but not a connoisseur. He knows Howling Cow is made on campus, but not much else. He’s never had Howling Cow before. He interrupts himself to take a bite. “This is good,” he says.

A few minutes later, Troi Perkins, a zoology major from Snow Hill, stops in for ice cream. She likes Strawberry and Chocolate Chip Mint, but today she’s branching out to Salted Caramel Cheesecake. Troi’s parents are from Vermont, and Ben & Jerry’s is her favorite ice cream ever. This stuff tastes like Ben & Jerry’s, she says.

Cartwright and his coworker Carl Hollifield walk through the food court, and a campus nutritionist sees them. “Hey! The ice cream guys!” she says before chatting them up, while students keep lining up inside the store for Butter Almond, Pecan Krunch, and Java Bean.

“Give somebody an ice cream cone, and it has a power all its own,” Cartwright says. “It makes people smile.”