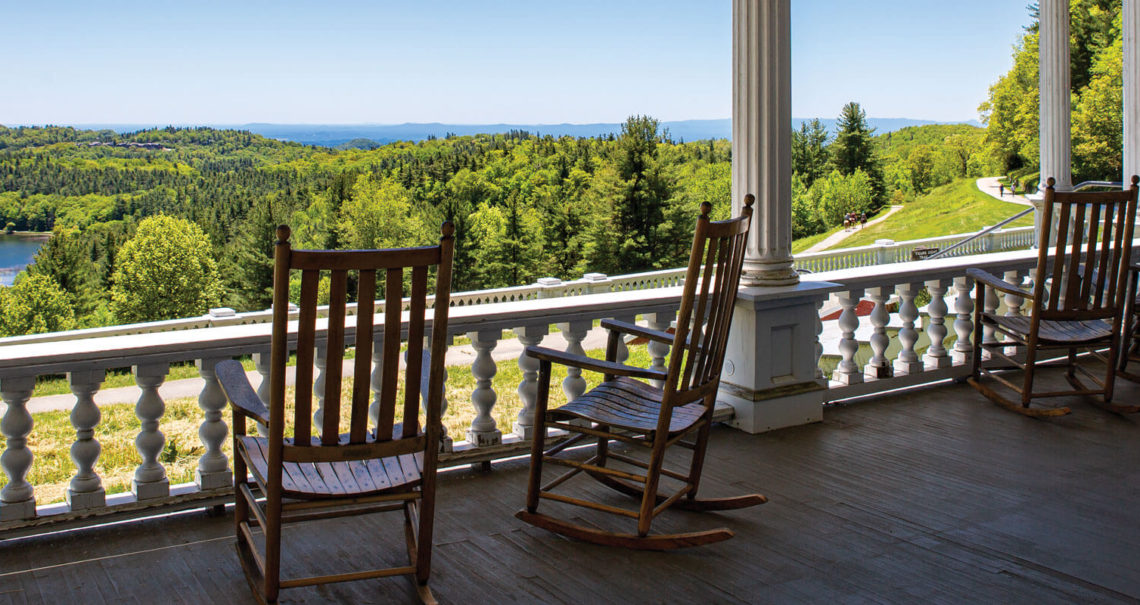 For many years, rocking chairs lined the eight-foot-wide porch of the historic 1901 Cone Manor, says Tina White, a supervisory ranger at Moses Cone Memorial Park. About 10 years ago, the rockers started to fall apart, and after discovering that the Cone family actually used wicker chairs on the porch, the National Park Service replaced the old rockers with historically accurate — stationary — chairs. But the community decided there’s nothing quite like a rocking chair, so a local resident donated a few new ones to the manor. Now, most years from April through November, visitors can view Bass Lake and a valley of white pine, sugar maple, and apple trees from the comfort of wicker and rocking chairs.

Since 2001, Maple View Farm Ice Cream has been a “cow-to-cone” operation, says manager and partner Allison Nichols-Clapper. Sitting in the nearly 50 well-loved rocking chairs that line the Country Store’s front and side porches, customers look out over distant fields of black-and-white Holsteins, whose milk helped create their scoops of creamy chocolate, butter pecan, and honey-toasted almond. 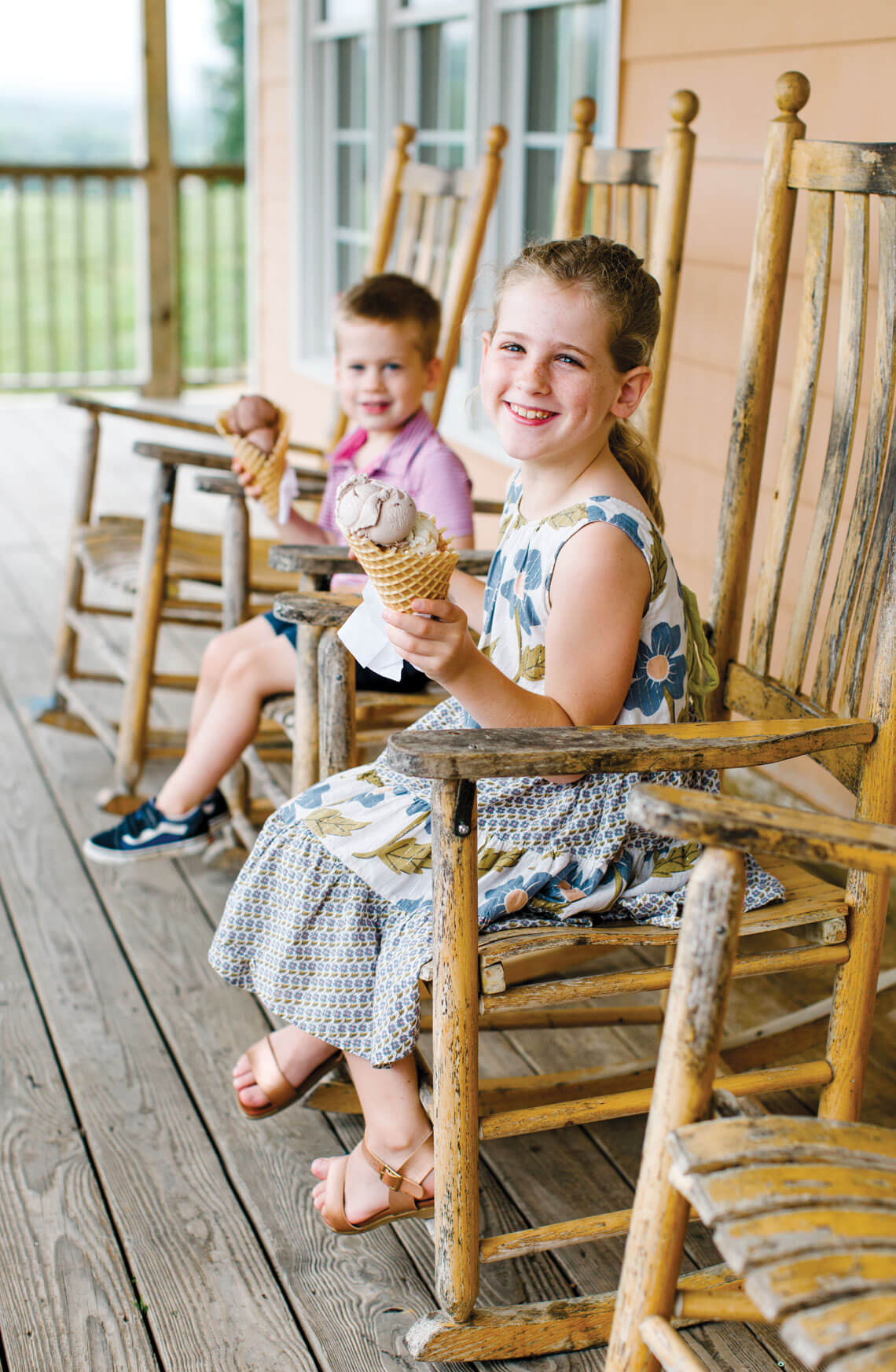 Rocking chairs are as much a part of The Terrace hotel as the beautiful 200-acre lake it sits on: The chairs have provided a welcome respite for visitors since the hotel was built in the early 1900s. Unlike the original rockers, which were shorter and woven from a straw-like material, the current high-back chairs are custom-made for The Terrace, says Rob Huckaby, the hotel’s chief operations officer and general manager. Some nights, he says, while rocking on The Terrace’s second- and third-floor balconies, the sky is so clear that you can see the Milky Way. 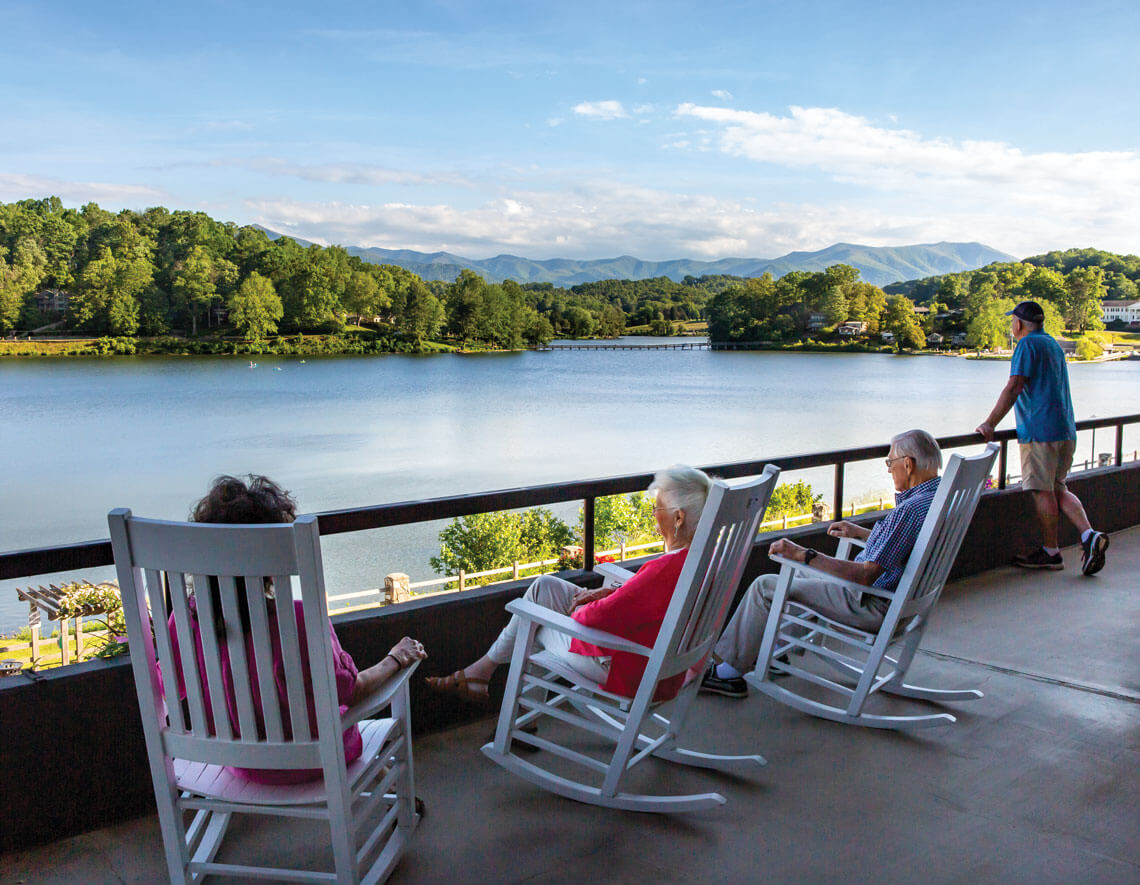 Debbie Robison (left) and Jo and Charlie Mallette gaze out onto Lake Junaluska from The Terrace hotel. Lucky guests might see the area’s five resident eagles swooping down to catch fish. photograph by Tim Robison

Like golf, rocking chairs are integral to Pinehurst Resort’s identity and mission as a place where relaxation thrives. Black-and-white postcards from as early as 1934 show hotel guests enjoying The Carolina Hotel’s veranda, leaning back in dark wooden rockers, newspapers in hand. Today, the resort’s signature white rockers can be found at each of its three properties, giving guests a moment of rest after playing a round. 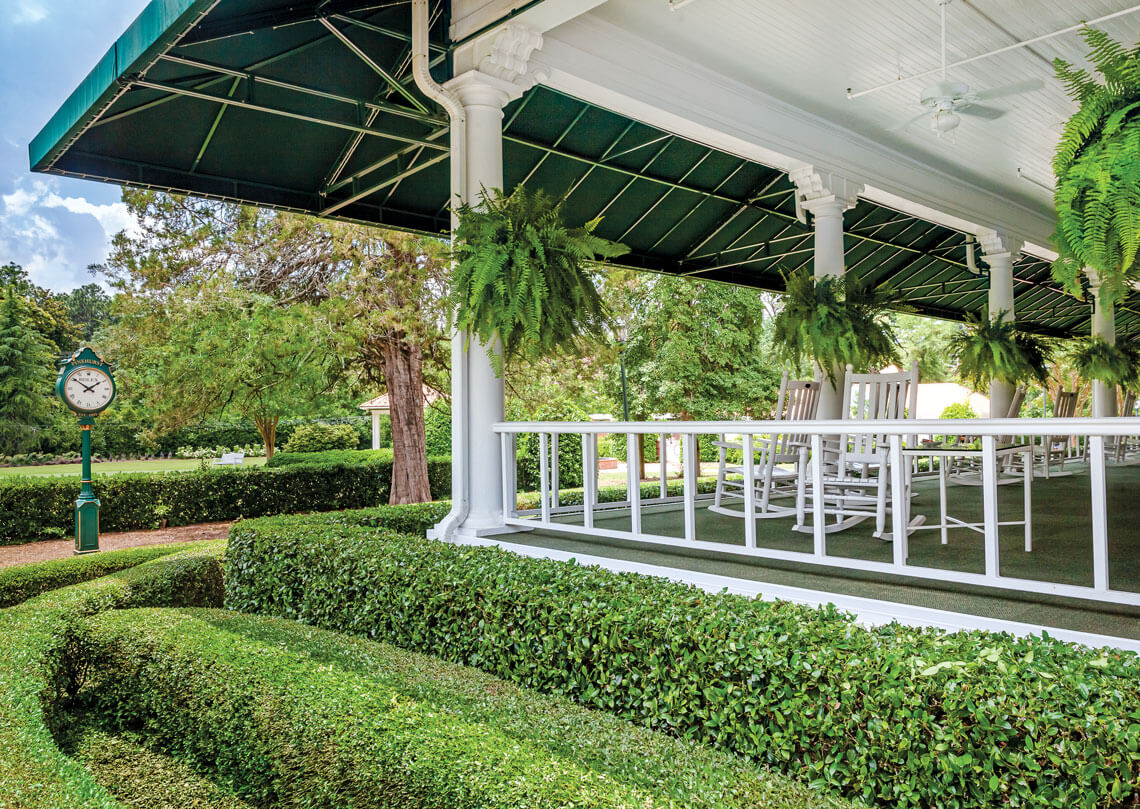 The Carolina Hotel in Pinehurst. photograph by John Gessner

The Inn on Biltmore Estate – Asheville

The aptly named Rocking Chair Terrace offers breathtaking views of Mount Pisgah and Biltmore’s Antler Hill Village, and, because it faces west, is the best spot at the inn to watch the sun set. Since the inn opened in 2001, 12 Lloyd Flander rockers have beckoned guests to sit back and enjoy the fresh mountain air — with a glass of Biltmore wine in hand, of course. 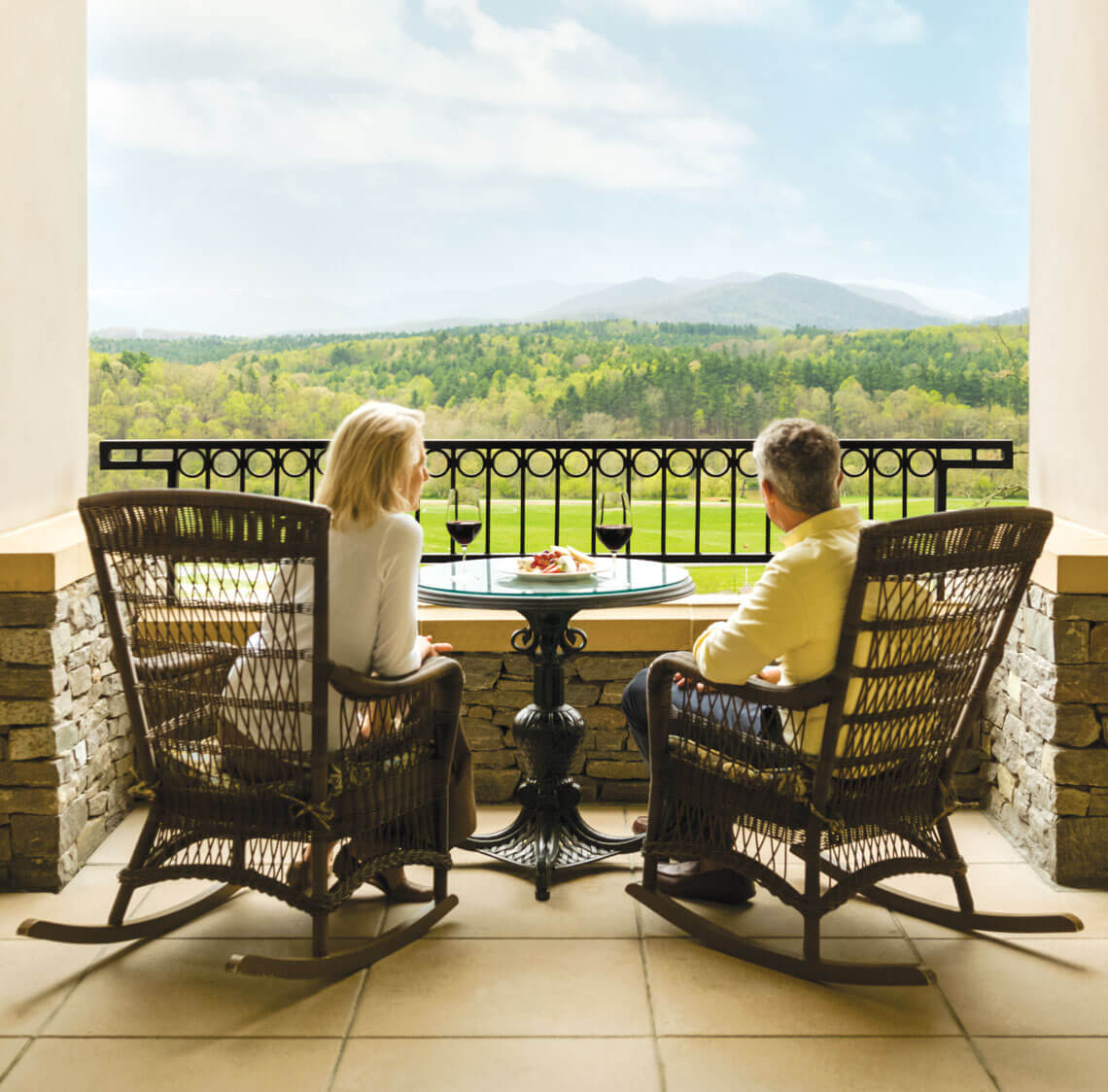 The Rocking Chair Terrace at the Inn on Biltmore Estate. photograph by Courtesy of The Biltmore Company

Mike’s Farm could easily be called the rocking chair capital of North Carolina. About 80 rockers fill the porches of the farm’s family-style restaurant, giving visitors a chance to stop and relax while watching their little ones pick spring strawberries or fall pumpkins. 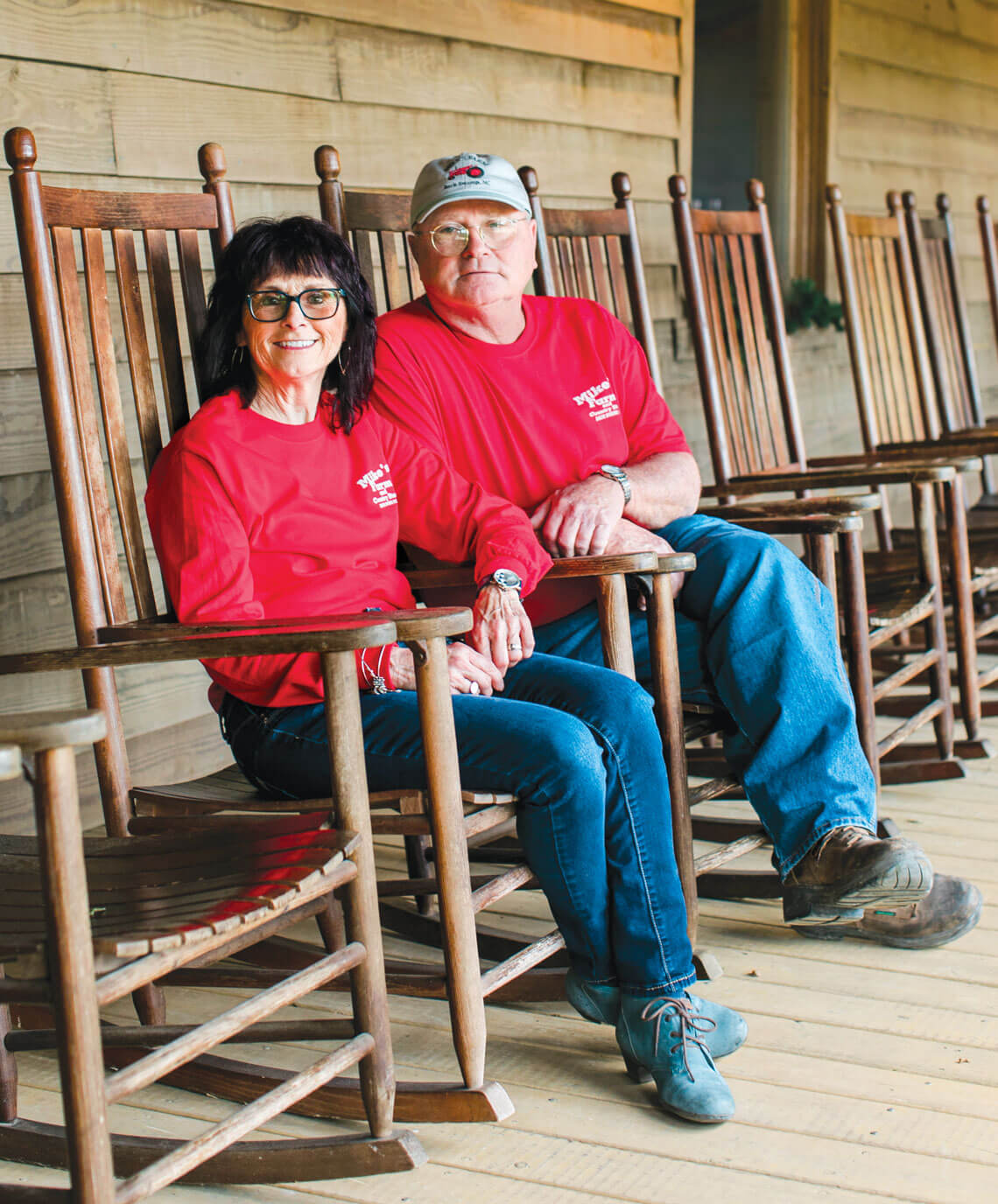 Black Mountain’s one-of-a-kind rocking chairs have lined Cherry and State streets for seven years, helping the town live up to its reputation as “the front porch of western North Carolina.” Local artists and businesses paint and sponsor the chairs, which are auctioned off at the end of each year as a fund-raiser for the “town that rocks.” 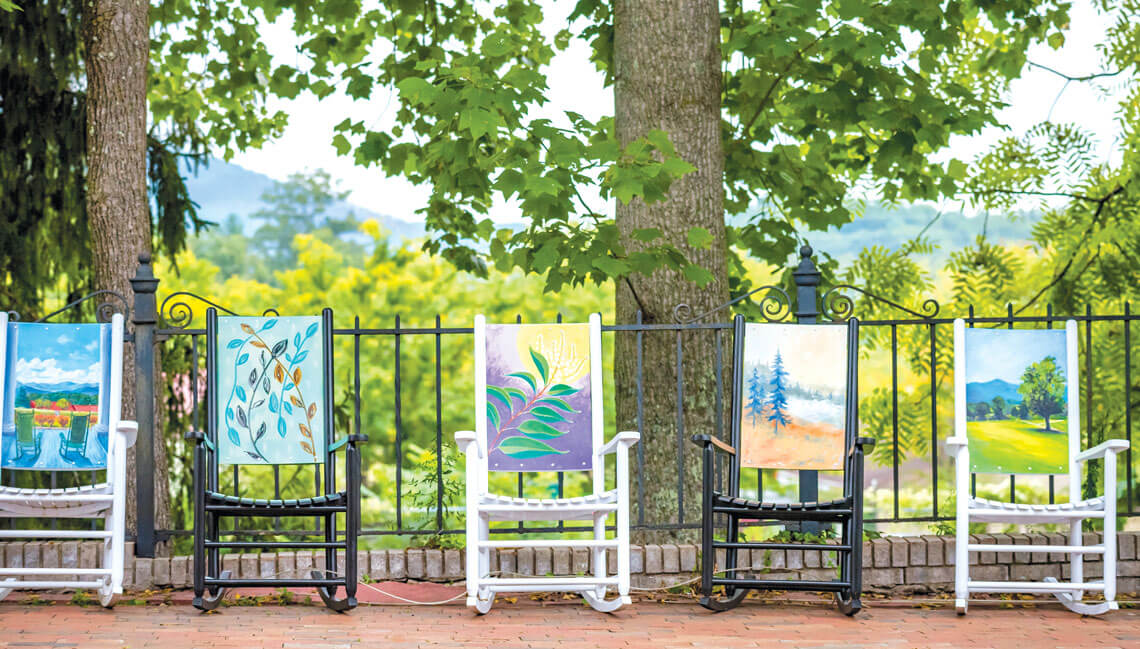 The rocking chairs on the porches of the 1782 Penelope Barker House look black, but when the sunlight hits just so, a greenish tint shimmers off their wooden frames. The paint has historic roots, says Mike Ervin, executive director of the house museum: After the Civil War, the federal government sent black paint to Southern properties to help repair damage from nearby battles. Many people mixed in light green or blue paint in an effort to stand out. Today, visitors rock between past and present before a stunning view of Edenton Bay. 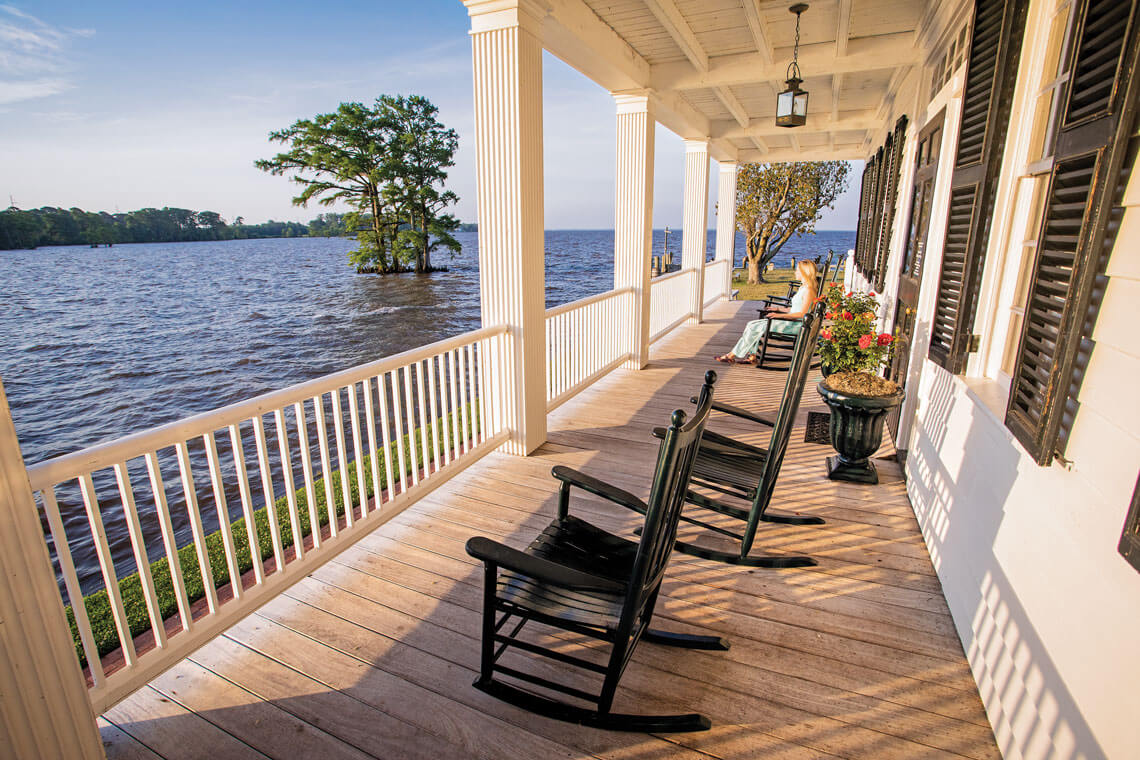 A gentle breeze cools visitors like Janie Munsey, who come to enjoy the historic Barker House’s picturesque views and watch for wildlife like ospreys. photograph by Chris Hannant