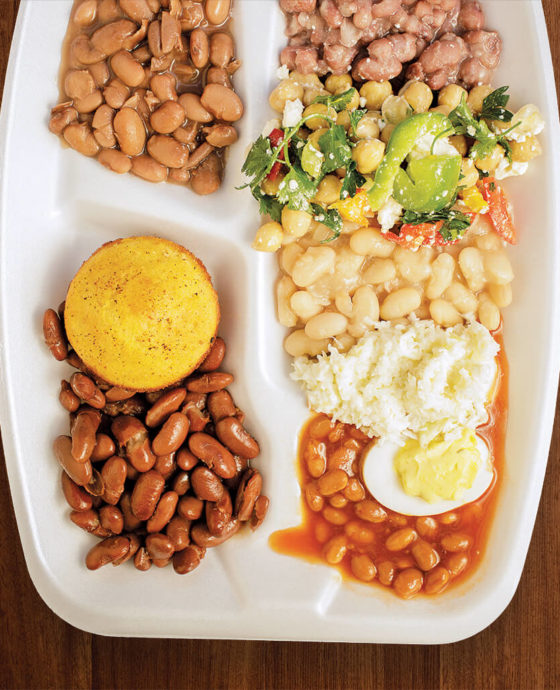 By the edge of a small pond, India Cain’s band sways back and forth. “Hey, good looking, what you got cooking?” she sings, and the crowd gathered on a hill called Guinea Ridge near Bahama breaks into laughter. There’s really just one answer. Everyone has come for beans. And as soon as the song ends and guest Sarah Woodard offers a blessing, folks file into line for a bean buffet: silver pans full of pinto, kidney, white, Anasazi, and garbanzo varieties. 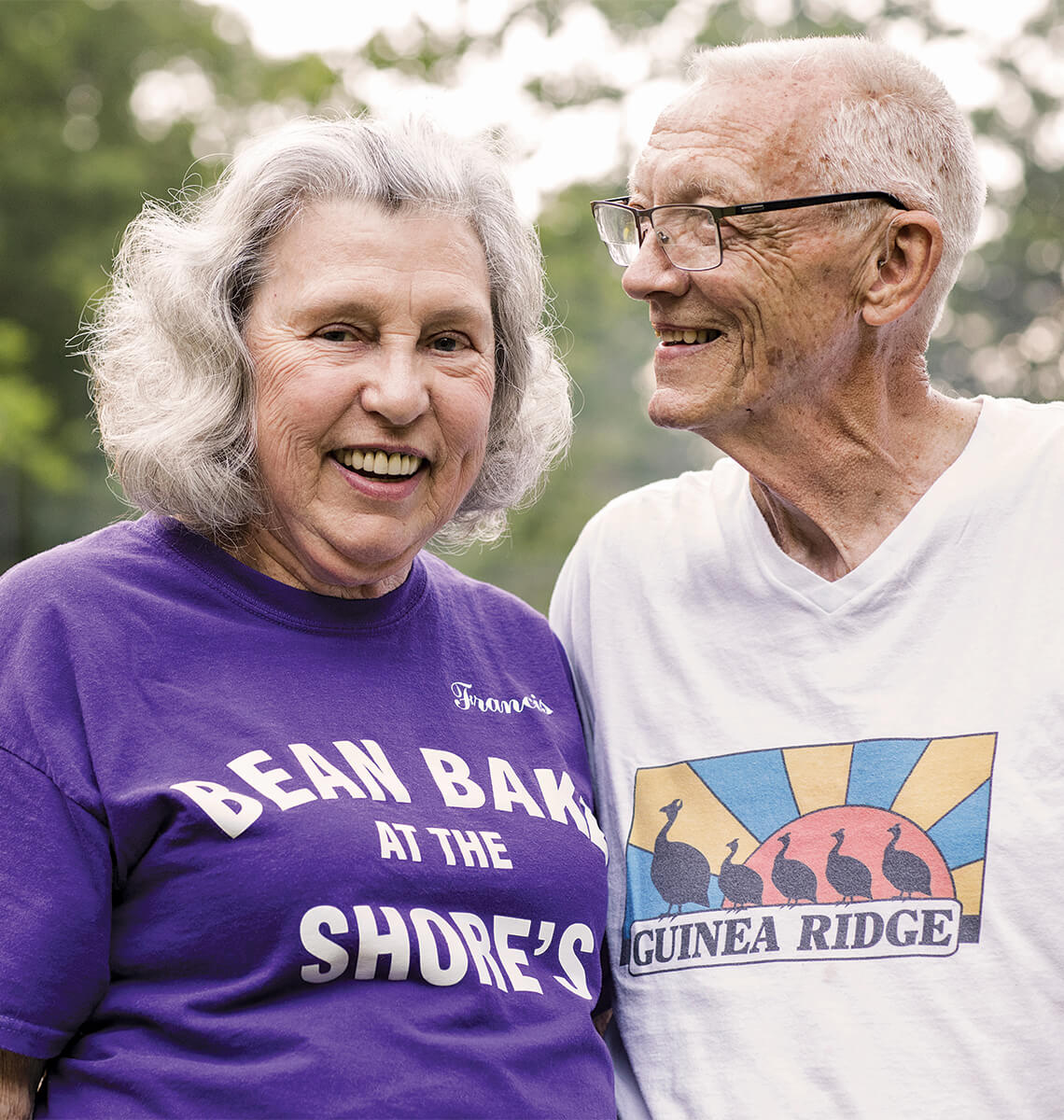 Lloyd and Frances Shore, who began hosting their unlikely bean party nearly a decade ago, meet at the end of the line. “People did a good job on the beans,” Lloyd says, scraping the bottom of a dish. Frances nods. She’s wearing a bold purple T-shirt with “Bean Bake at the Shore’s” spelled across the front in white lettering.

The way Lloyd explains it, beans became a central part of his diet after a heart scare (his cardiologist was, in fact, invited, and his dentist is among the crowd at the gathering). Then, it dawned on him: Why not have a bean cookout to share a meal with others? “I’ve never heard of a bean cookout,” a neighbor supposedly said. So Lloyd took up the charge: “I said, ‘You have now!’” And the bean cookout was born.

Frances does most of the cooking. She bakes corn muffins, chops cabbage, and, of course, slow-cooks beans — except the baked beans, which come in a can. “We cheated on those,” she admits. Frances’s favorite is a white bean; Lloyd’s, the Anasazi, a slightly sweet bean that they order in 50-pound bags from Colorado to freeze and eat throughout the year. “They are really pretty beans,” Frances says, describing their mottled red-and-white color. “But when you cook them,” Lloyd adds, “it all fades away and they look like a pinto.”

Folks sit in foldout camping chairs and listen to the music with Styrofoam trays balanced on their laps. There is ample bean talk and also a few bean jokes. But the cookout is more complex than beans — or rather as complex as beans, which are rich in flavor and nutrients and provide a simple yet hearty meal. Boiled down, the Shores’ annual event is about doing a lot with just a little.

Lloyd, who is now in his early 80s, is a self-described tinkerer. Signs of his projects are scattered all over Guinea Ridge, land that he and Frances first purchased as nearly 13 acres in the 1970s. “We come out here and relax,” Lloyd says, “and mow the grass.” Frances has an extensive garden (yes, she occasionally grows green beans), and Lloyd enjoys throwing feed to catfish in the pond he helped make. He stores the fish food in an old mail collection box he salvaged, which sits a few feet from a satellite dish he also found in town. He intended to sink it in the ground to make a pool for his grandchildren, but it’s overgrown now, covered in leaves. 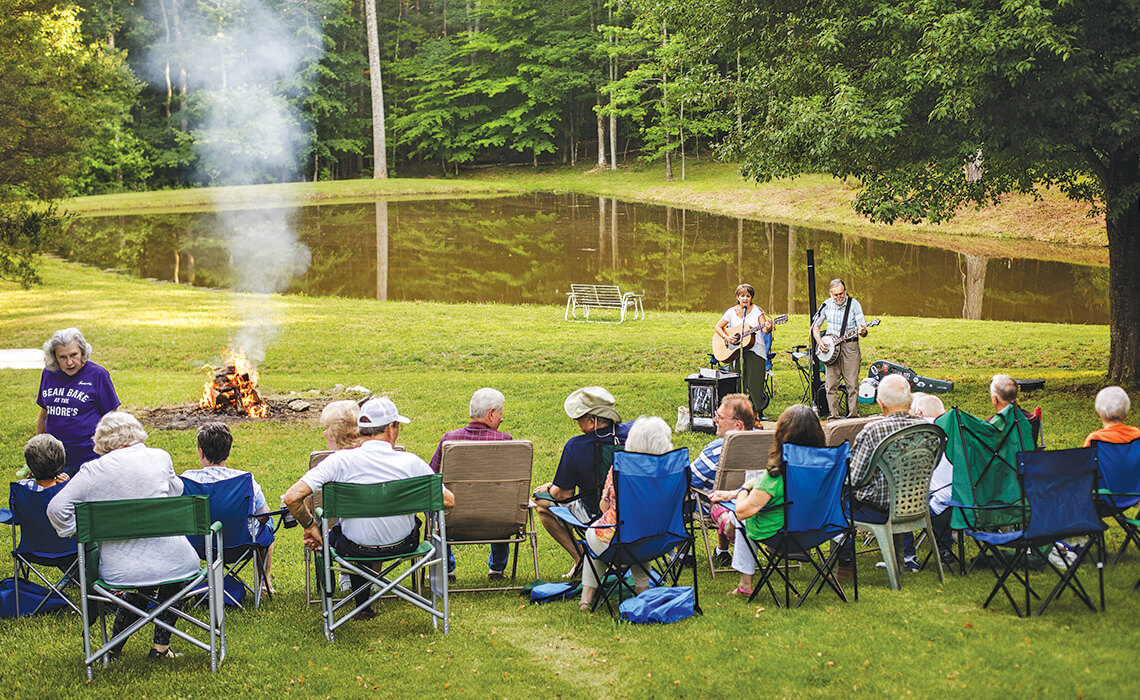 Bean-loving friends, family, and neighbors join hosts Frances and Lloyd Shore on Guinea Ridge’s 37 acres for a bonfire and music by India Cain and Keith Allen. photograph by Alex Boerner

If Guinea Ridge sounds junky, it’s not. The 37 acres are thoughtfully kept, all placed under stewardship to protect the trees. Lloyd estimates that it takes him 60 days to prepare the property for the cookout. He mows the hill, collects and stacks wood for a bonfire, and sets up lights. “And then the suspense of whether it will rain or not,” he says. But really, the prep work happens year-round. Just as Lloyd toils on the land, he also toils at building community. Take Sarah Woodard. Lloyd met her years ago at the Downtown Durham YMCA. She later hired him to print materials for her husband, State Senator Mike Woodard, during one of his first campaigns. Both Woodards are now bean party regulars. “I love it. It’s peaceful out here,” Sarah says.

“And all the beans,” Mike adds.

“We’ve got 74 so far,” says Sarah Price, who’s been working the welcome table. She met Lloyd and Frances in 2013, when she posted a Craigslist ad looking for a rental house. “I’m recognizing the band’s songs now,” she says, noting that she attends year after year.

Several of Lloyd’s gym buddies show up to the cookout, as do folks he met while training as an offset printer at Duke and, later, while working for himself. Some of his old Army pals have driven down from other states, and Frances’s friends from Sunday school and her time at Watts Hospital School of Nursing are also in attendance. Members of the Shore family are there in droves, too. “I think Lloyd is one of the few people who could get so many different people together to eat beans,” says Freeman Beard, a local watercolorist who’s filling his plate. But the simplicity of the event and Lloyd’s genuine invitation is comforting — quite like a bowl of pintos.

As the sun sets, guests fold up their chairs and begin to file out down the long dirt driveway lined with trees. “You’d think it would be boring, sitting around and eating beans and listening to music,” Frances says. “But they keep coming back.”