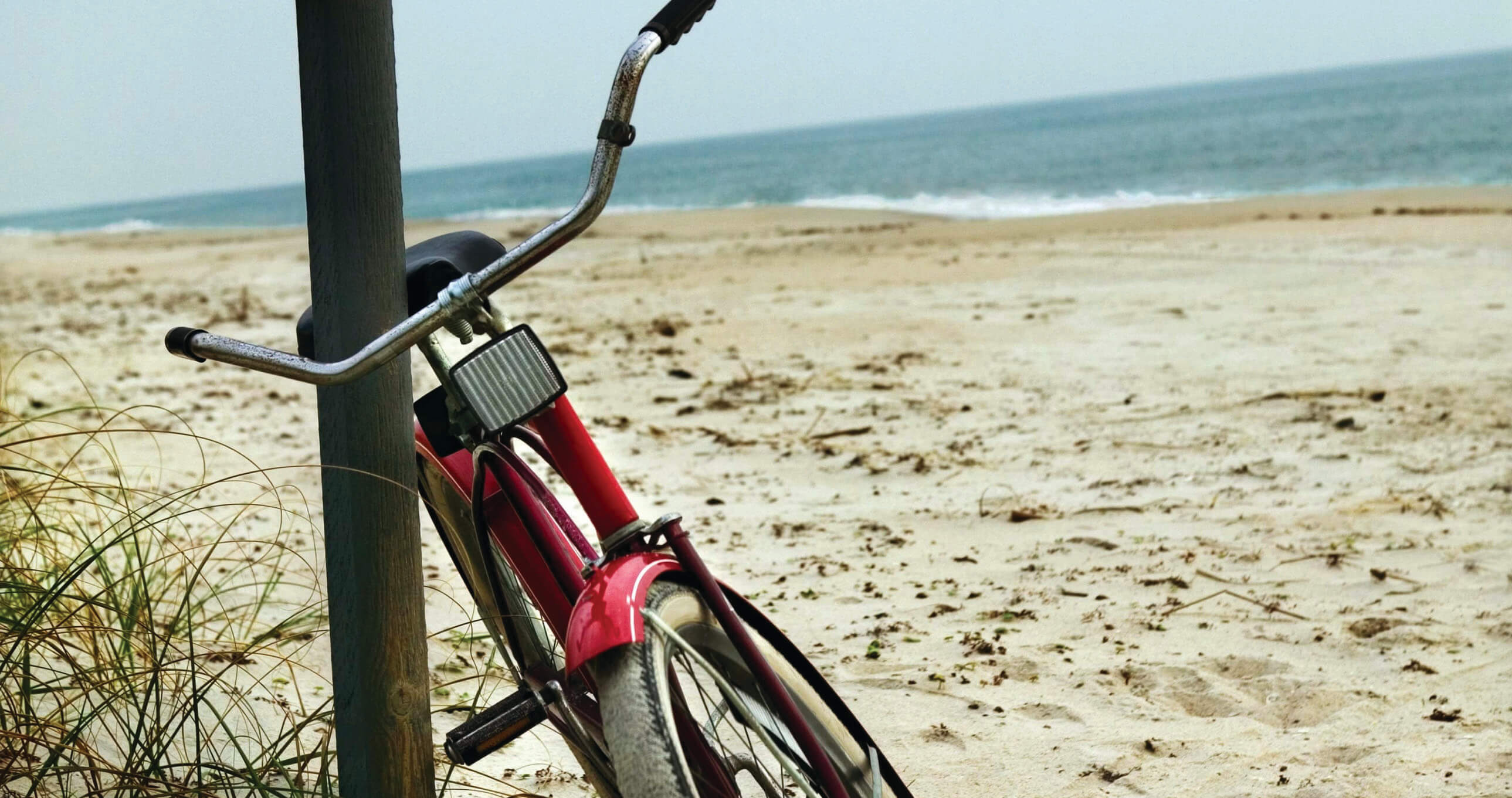 My 3-year-old son still struggles with his shiny red tricycle. His feet, clad in little black-and-white, Velcro-strapped sneakers, halt after each thrust, the pedals stopping short of a full circle. The Radio Flyer lurches forward but never gains momentum.

“Push. Keep pushing,” I urge. Each time he gets on, I long to see him propel himself forward, feet pumping in a steady whir. I yearn for the smile that will brighten his face when he first feels the thrill of those wheels spinning under the power of his own legs.

It’s the same thrill that hits me like the sun breaking through the clouds each time I get on a bike, and especially when I get on a bike at the beach. The wind brushes against my skin, and the world rushes by close enough to touch. I feel free and alive in a way that I never do when surrounded by the bubble of my sedan, where I watch through narrowed eyes as life pounds on, a blur of exit signs and taillights.

To arrive at the beach, to glimpse the ocean or the sound for the first time in months, is to feel the worries of everyday life loosen their grip. To lock the car and hop on a bike, smelling the salt air as I pedal toward the sand, is to cast off those worries, to outrun them for as long as I can keep two wheels turning beneath me. Speeding ahead, I am taken back to a time when a glittery-blue girl’s bike with plastic-tasseled handlebars and a psychedelic-flowered banana seat was enough to make my dreams come true.

In cataloging the pleasures of the beach, the simple joy of riding a bike within earshot of the surf rates high. This is not the off-road trek for exercise, requiring kneepads and Power Bars. This is the act of trading your pumps or wingtips for flip-flops, burying your clattering mass of keys at the bottom of your purse or briefcase, and tooling around an island on two wheels, parking tickets and overdue oil changes forgotten. It’s the best way to see an island, and on some of North Carolina’s most beautiful coastal locales, it’s also the most practical. Finding a parking spot on Ocracoke, for example, is a fool’s errand, and visitors to Bald Head Island must leave cars on the mainland.

To take to the bicycle at the beach is to embrace a relaxed pace, to slow down, body and soul. That’s what Dave Pollard does when he gets off the Hatteras ferry at Ocracoke every summer. Anyone who has wandered into the Creekside Cafe or Ocracoke Coffee Co. during the island’s high season has likely heard Pollard. A short-haired, goateed singer-songwriter, he spends three weeks at Ocracoke every year around the Fourth of July.

There, Pollard falls deep into what the locals call an “Ocracoma,” the island state of mind, and also the title of Pollard’s first solo CD. A fluid sense of time and a reliance on two-wheeled transportation are strong indicators of the condition, he says.

“Getting down there, it just makes you feel free,” Pollard says. “Things just seem so much easier when you don’t have to do anything but hop on your bike and go. It harks back to a much more carefree time.”

Pollard has been an Ocracoke regular for more than 20 years. The beauty of the island struck him first, the wide expanses of sand and sea, the varying shades of blue and green that dazzle the eye. But the prevailing attitude won him over. An IT worker by day and a musician by night in Richmond, Virginia, Pollard revels in beach crowds eager to hum along to his James Taylor- and Jim Croce-inspired tunes.

Transporting equipment to a gig is about the only thing that gets Pollard in his car during his island vacations. Otherwise, he rides a bike just like when he was a kid. In the New York City suburb of Cranford, New Jersey, in the late ’60s and early ’70s, that’s how kids got places — to school, to the pool in the summer, around town to buy a candy bar or a comic book.“It’s kind of reminiscent, because that’s the only thing we had,” he says. “That was your only mode of transportation there, too.”

By the time he visited Ocracoke in 1987, it had been decades since his feet had pushed pedals.

“When I first went there and started riding bikes, I felt really awkward,” he says.

Luckily the old saw “It’s like riding a bike” held true. Today, he loads his own two wheels onto his car when he heads for the coast. His bike is a cross between a beach cruiser and a mountain bike, dark purple and black with a seat that lets him sit up straight rather than lean too far forward. Life on Ocracoke is easier when you don’t have to hunt for a parking spot.

Fun is one of the many things my friend Judy Royal excels at. I first met her when we both lived in Wilmington and she was a freelance reporter. For a while, she shunned full-time job offers, worried that working a set schedule would cut into her boating time. Judy approaches fun the way most other grown-ups approach land deals and corporate takeovers. It’s like she has a mental spreadsheet for every situation, with the optimal outcome being maximum fun.

These days, Judy lives on Carolina Beach just across the Snow’s Cut bridge, and she loves visitors. As I crossed the water on my way to her house last spring, motorboats cut long, white wakes in the calm, blue-green of the canal beneath me. The temperature sat at 75, and the sky was cloudless. My breath began to come a little easier as I rounded the curve onto St. Joseph Street, the wide road lined with palmettos and oleanders that leads to her condominium.

I was on my own that weekend, having left husband and son to their own devices, seeking recuperation from a long season of much multitasking and commuting and precious little fun. We had no agenda, which was the most welcome break of all. Judy and I sat by the pool and caught up, and when it was time to carry ourselves to dinner, Judy insisted that we ride bikes. Because the members of our party outnumbered her supply of bicycles, this required a few phone calls and a little wrangling on her part. It seemed a lot of trouble, but Judy persisted.

When it arrived, my bike was blue, a beach cruiser with fat tires, a wide heart-shaped seat, and a wire basket in front. I pedaled slowly around the parking lot getting my bearings. Cutting a path through the cool evening air, I felt light enough to fly. We rode to The Deck House, a converted church with a soaring ceiling on Charlotte Avenue, where we ate seafood with friends. Then we pedaled to The Last Resort, which boasts of being the state’s smallest bar, where we sat outside listening to guitars and cars whizzing by on Lake Park Boulevard. Sunday morning, we biked to the boardwalk for a seaside breakfast of Britt’s Donuts. More than anything on our agenda, even more than Britt’s beignet-like wonders, the memory of the warm salty air in my hair as I rode through the twilight stuck with me through the long winter months.

One of the first things Judy did when she left downtown Wilmington for Carolina Beach a couple of years ago was buy a bike.

“When I moved over here, people have these beach cruisers and you see them everywhere,” she says. “It seems like a relaxing way to get around, and it just sort of fit with the island lifestyle.”

Hers is a blue beach cruiser with the classic curves of a bygone era, from the days when movie stars had hips. It’s actually a recent replica, bought at Wal-Mart for 80 bucks, but it rides like a vintage Cadillac. Judy’s new neighbors advised her not to spend too much on her cruiser because the salt air and sea spray would exact a toll quickly. Made for flat terrain, it has one gear, a white wire basket on the front large enough to carry her purse, and a Carolina-blue bell. When she rides at night, little lights shaped like guppies come on in the front and back to alert drivers to her presence.

“It’s an island kind of thing to have,” she says.

Judy says she likes her guests to bike because it gets them into the Carolina Beach mindset. “It kind of helps them get out of their regular way of life and makes them feel like they’re on vacation, even if they’ve just come to visit for a night.”

Kent Mitchell feels much the same way about bikes and guests. That’s one reason he shored up Bald Head Island’s rule against personal motorized vehicles when his company took over the development in the early 1980s. Preserving the environment was a concern, too. As president and CEO of Bald Head Island Ltd., Mitchell spends most of his time working and living on the island.

The setting recalls the summers of his 1950s childhood, when Mitchell’s family would decamp from Houston to Galveston along the Gulf of Mexico and beachfront parks were only a bike ride away. As an executive zipping between meetings, Mitchell shuns Bald Head’s ubiquitous electric golf carts for his old Cannondale, seldom deterred by wind or weather. “What the heck?” he says. “Just buck up.”

Among his favorite stretches is Federal Road, a two-and-a-half-mile, east-west straightaway that follows the path of the 1900s railroad tracks built during construction of the long-gone Cape Fear Light. Tangles of maritime forest enclose the path, and sunlight dapples through the live oaks.

“It’s just kind of a beautiful solace,” he says. A break from the desk to boost the heart rate helps keep stress levels low, Mitchell says. He also gets a kick out of speeding past puttering golf carts on his bike, which would make anybody feel a bit like a kid again.

My inner kid can’t wait to get back to that cruiser at Carolina Beach. I’m hoping my son will get the hang of his Radio Flyer before we head to the coast. This could be the summer he’ll remember, when the salty winds first blew back his hair.