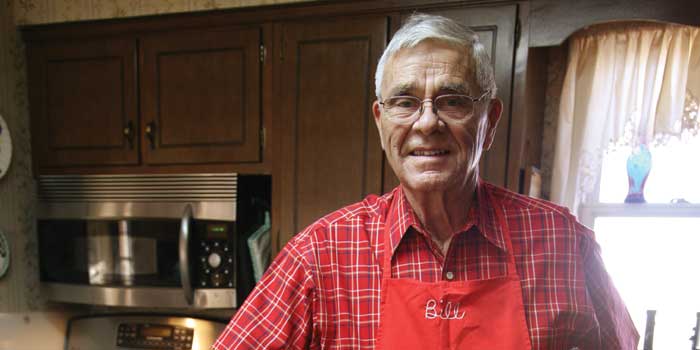 Bill Crabtree insists you don’t need a recipe for biscuits.

And he’s right. You can follow a biscuit recipe to the letter. And they’ll come out too hard. Too dry. Too flat.

Making biscuits is about feel.

It’s a choice that still sticks with him, even at 82. He also makes Brunswick stew and milk gravy, but biscuits are his specialty. He makes 600 to 800 biscuits every six weeks for his church here in Haw River. The last batch totaled 15 pans. Big pans. At 54 biscuits per pan, that’s 810 biscuits. Recipes don’t come with quantities like that.

Bill enjoys making biscuits at church, but he’s just as happy making them in his home kitchen. It’s a country kitchen inside a house built on family land. Nineteen beef cows roam beyond the kitchen window. The plates set on the table have a farm motif.

One of Bill’s uncles ran a barbecue restaurant in Haw River years ago. When his uncle died, he left Bill the restaurant’s butcher block, so Bill put it in his kitchen.

He stands in front of it now, sifting flour into a stainless steel bowl.

When Bill was young, his father, also a farmer, hauled wheat to the mill to grind into flour. Later, Bill bought regular flour from the store and added baking powder, lard or Crisco, and buttermilk. Today, Bill uses Southern Biscuit Formula L flour. It’s a biscuit mix with everything in it except buttermilk. He thinks it works just as good. And when you’re making 800 biscuits at a time, there’s nothing like it.

A woman from church once asked Bill how he makes his biscuits. He told her. She made them. Then he asked her the next Sunday how they turned out, and she said not as good as his. The feel for biscuits takes practice.

After Bill adds the buttermilk and mixes just enough to form a ball, he turns the dough onto a board placed on top of the chopping block. He pulls out his rolling pin with red handles, flours the dough, and rolls.

“Personally, I like a real thin biscuit ’cause the crust is the best part,” he says. But others prefer thick biscuits with a lot of fluff in the middle. “I kindly try to split it up.”

Bill turns a drinking glass upside down and stamps it into the dough to cut circles. Then he places 24 circles onto his pan. A smaller pan this time. He dips his fingers in buttermilk and dabs them on top of each one. He slides the pan into the oven, a Kenmore with dials, nothing digital. 425 degrees. 15 minutes. Buzzt.

“They ain’t quite ready,” Bill says.

When the tops turn golden, he pulls them out and stands the biscuits up on their edges around the pan’s rim. If he leaves them lying flat, the bottoms sweat. And there’s nothing worse than a soggy biscuit. The crust is the best part.

Most of the time, it’s only Bill and his wife, Carolyn. But the Crabtrees have five children. A few years ago, their daughter Carol gave Bill a basket filled with five rolling pins for his birthday. Each pin has the name of one of the Crabtree children burned into the wood. And their spouses and their children and their grandchildren.

The basket also came with a note.

“Each rolling pin represents another of your legacies, each one of your children,” Carol wrote. “Although the mark you are leaving goes way beyond biscuits, they are a symbol of how you care.”

Over the years, Bill has taught his children to make biscuits. He’s shown them the process and the tools. The bowl, the glass, the pan. They have their own rolling pins.

But their biscuits will never taste as good to them as the ones from this country kitchen. The ones they grew up eating. The ones that carry feelings of love and warmth and comfort. Feelings that only get better with years of practice. 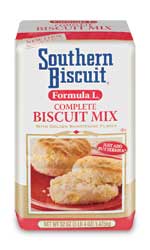 The flour Bill Crabtree uses might not come from his own wheat, but it is ground in his home state. Midstate Mills in Newton has been producing Southern Biscuit flour since 1935. In one hour, the plant produces enough flour to make more than 790,000 biscuits. The company now makes several bread mixes, including the Southern Biscuit Formula L Biscuit Mix. Midstate Mills products are available in grocery stores throughout North Carolina, South Carolina, Georgia, Virginia, Tennessee, and Kentucky, and online at midstatemills.com.