WATCH BELOW: Scroll down or click here see Katie in action and discover more of her state park paintings. 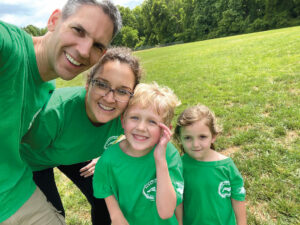 A visit to Haw River State Park in January 2020 kicked off a year of adventure for the Podracky family — Dave, Katie, Miles, and Georgia — as well as Katie’s series of state park paintings. photograph by KATIE PODRACKY

Part of being a parent is knowing when to give up, give in, and go to McDonald’s. Which is why Katie Podracky found herself eating a Big Mac on Thanksgiving Day. The situation was another challenge in a year of challenges: personal, accidental, intentional.

For the Podracky family, 2020 began with a spur-of-the-moment trip to Haw River State Park, where the children — Miles, then 5, and Georgia, then 3 — busied themselves being muddy and delighted on the riverbank. At the visitor center, Katie picked up a state park “passport,” a program challenging North Carolinians to visit all 41 state parks and recreation areas. The ranger stamped the Haw River box — check. “We never expected to do it,” Katie says. “We’d just signed up for soccer and ballet.”

In March, a true challenge hit: the pandemic. Soccer, ballet, and everything else vanished in a single weekend. The state park challenge began to look like a parental and mental health prize in itself, and the Podrackys decided to visit every state park in the nine months that remained of 2020. When Katie told a friend about the family’s goal, the friend threw down yet another challenge: a painting per park. 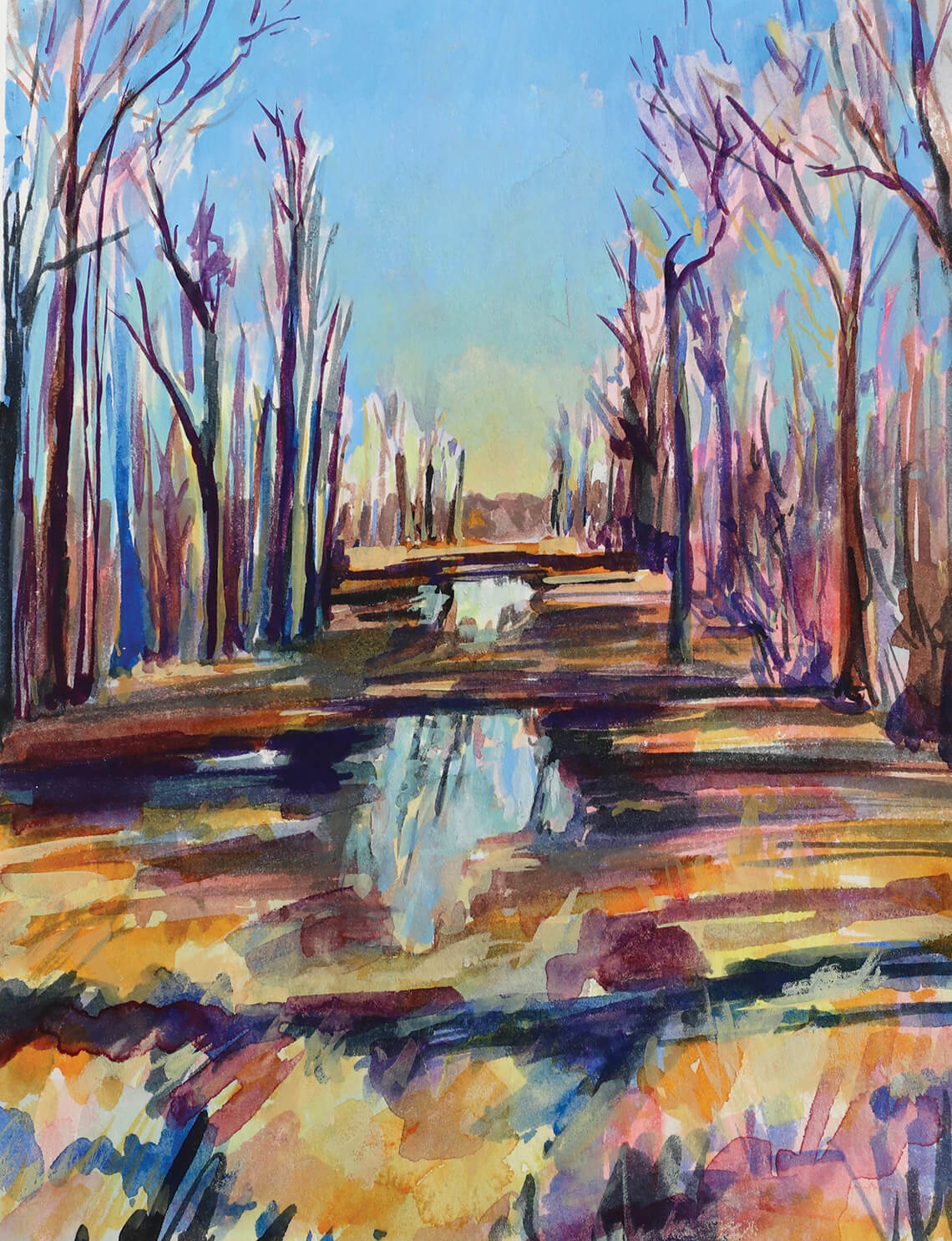 Katie is an artist; painting is her pastime, passion, and vocation, and her work is featured in the permanent collections of four universities and several corporations. An Asheboro native, she graduated from Washington and Lee University in Virginia with a double major in the opposing poles of biology and art. Maybe she’d illustrate textbooks, she thought, but … no. Instead, she did double duty working for and pursuing a master’s in art at the Savannah College of Art and Design. She switched degree programs when her husband, Dave, took a job in Greensboro, earning a master’s in teaching at UNC Pembroke while simultaneously teaching art in public schools around Greensboro.

Though she normally works with oils on large canvases — “Southern, colorful, playful pieces,” she says — Katie accepted her friend’s challenge, switching to gouache and watercolor, a medium that travels well and cleans up easily, for many of the park paintings. “John Singer Sargent is a favorite artist,” she says, “and he had work that he did for a living, and work that he did for himself, and those were of his travels.” So she decided to follow his example.

After a year of planning, traveling, and reserving Airbnb rentals, Katie now rattles off park names with astonishing familiarity, even in casual conversation. “New River and Mount Jefferson are right there together, so you can do those during the same trip,” she says. “We went to Gorges over July Fourth — so many rhodos and waterfalls! And they’ve found at least 30 dugout canoes at the bottom of Lake Phelps, in Pettigrew State Park. One of them is roughly 4,400 years old.”

With so many painterly possibilities, how did she choose what to portray? Except for Pilot Mountain, she avoided the expected, iconic scenes. “I like the ‘side view’ of a place,” she says. “It’s like taking the road less traveled. I like to notice and celebrate scenes that may go overlooked but are just as spectacular as the landmarks.” 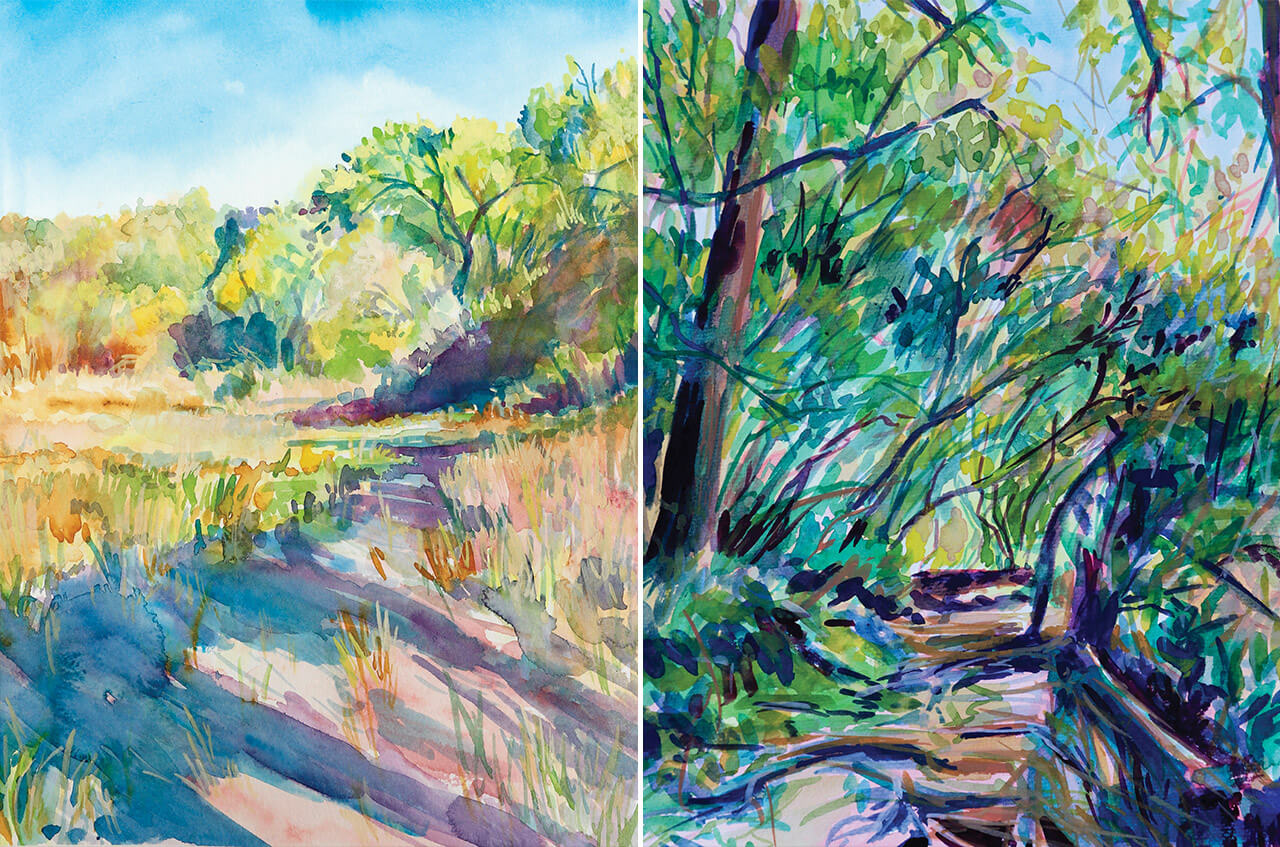 Katie’s Hammocks Beach State Park and Gorges State Park paintings were created from photographs she took on her trips.

Relying on photographs that captured the light and color of a particular park, she may take the landscape from one picture and the sky from another. For her Fort Macon painting, she combined one evening’s beach sky with a photograph of her children playing in the waves.

“But where are the children?” I ask, studying the painting. “Did you delete them?”

“Absolutely,” she says, laughing. “That was the sun poisoning day.”

She riffles through multiple studies of live-oak skeletons from Goose Creek State Park. “I got kind of obsessed with those,” she admits. 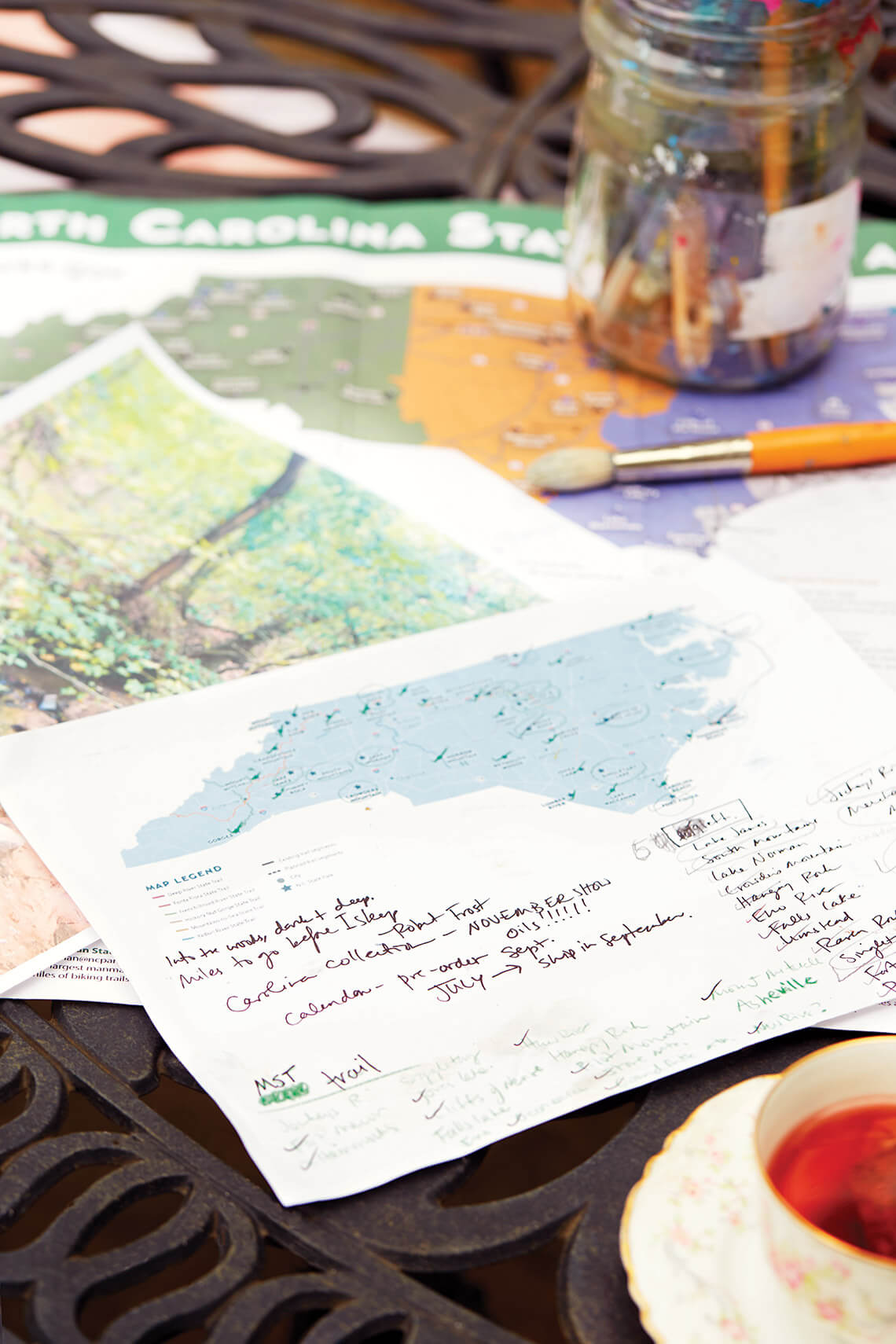 Katie checked off state parks as she went on a map. photograph by Stacey Van Berkel

Within the stack is a map with each of the 41 parks checked off. It functions as a kind of diary, with scribbles along the margins. “Into the woods, dark and deep/miles to go before I sleep,” she’s written, half-remembered snippets of poet Robert Frost’s “Stopping by Woods on a Snowy Evening.” Katie explains: “Our son, Miles, is named for that very reference, and I love that this year of visits has been part of his journey.”

“Miles to go” seems to encompass much about 2020 itself. And yet: “There was this tree in Weymouth Woods — we have the oldest longleaf pine in the entire world! It germinated in 1548,” Katie says. “That tree made me feel tiny and insignificant in the best way. Imagine what that tree has lived through, and then along comes our little family in a pandemic. I marveled at that.”

That marveling also explains more of her artistic approach, in renderings of Falls Lake and Raven Rock and Crowders Mountain. “Trying to figure out how to represent each park has been fun. I love emotional landscapes, something that evokes nostalgia or joy, or reminds us how we felt when we were there.” So she has no apologies for the winter sky and brown grasses of Haw River in January.

On December 31, the Podrackys visited Goose Creek, their final park. A storm approached, but Katie and her family held the fort, playing on the sandy banks of the Pamlico right through the driving rain. “And it was just great,” she says with enthusiasm. “Pre-pandemic, I would have said, ‘Run for the car!’ But this was the last one, so we lingered while the storm chased everyone else away.”

WATCH: See Katie in action and discover more of her state park paintings.

Though everyone asks, Katie is too wise to give a first-place ribbon to any single park. But she does have a clutch of favorite family experiences, including High Shoals Falls at South Mountains State Park and Deshazo Mill Falls at Mayo River. And, oh, their late autumn Thursday evening arrival at Lake Waccamaw. She and Dave located their Airbnb, a quaint cabin on the shore, and gave each other a high five for its utter perfection. Except … the lock code didn’t work, the cell service didn’t work, the host didn’t answer their call, and it was dinnertime and the children were cranky. Which is how Katie came to be eating fast food at 9 p.m. on Thanksgiving. Yet another challenge.

Still, “It was the off-season, so nobody was there,” she recalls. “It was foggy, and the trees hadn’t lost their leaves yet, so we had that vivid red of the maple trees reflected in the water along with the cypress trees, and I could have looked at that forever.” Besides, “the Thanksgiving dinner I’d packed in a cooler was delicious the next day.”

Katie laughs again and turns a page in a collection of her watercolors, compiled for a calendar titled “The Way Forward.” “I get a lot of joy out of moving colors on a page,” she says. She decides, in the end, to declare a superlative not for a park, but for the challenging year of 2020, a year of car trips and children, trees and beaches, rivers and boulders: “It was one of the best years of my life.”

To see more of “The Carolina Collection” and Podracky’s other work, visit katiewallart.com.